These Stocks Will Hike Their Dividends 20%: Buy Now

With valuations stretched and earnings sagging—a forecast 7.9% drop for S&P 500 companies in the first quarter—it’s getting tougher to find reliable dividend growers at bargain prices.

You won’t find much comfort in the latest research from FactSet, either: in the fourth quarter, S&P 500 dividend per share (DPS) growth came in at 9.5%. That’s still healthy, but it’s the first time that figure has dipped into single digits since 2011. 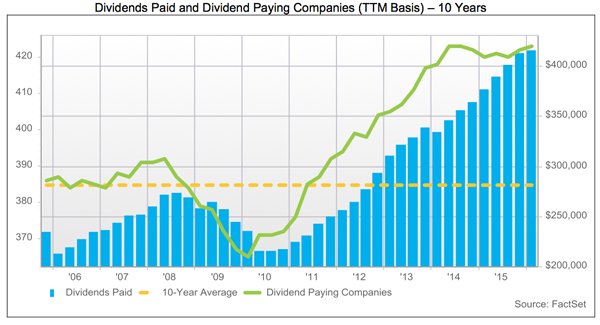 But you should take that news with a huge grain of salt, because one sector—energy—carries most of the blame. In Q4, year-over-year DPS growth plunged to 2.4% among S&P 500 energy stocks, from 11.6% in Q3.

My advice? Skip energy and zero in on sectors that are still pumping up dividends at rapid clips, like financials, technology and healthcare.

Here are five companies from those sectors (and others) that are gearing up to deliver big dividend hikes. They’re also attractively priced, making now a great time to buy.

Apple (AAPL) yields 1.95% and only started paying dividends in 2011. But since then, it’s hiked the quarterly payout by 37%. Another boost looks like a lock when the iPhone maker reports earnings April 25.

That’s because Apple’s payout ratio (or the percentage of earnings it sends out as dividends) is just 22%, giving it plenty of room for more increases as it develops new products, like an overhauled iPhone (due out in September) and potentially an Apple Car.

The company also has a long history as a value stock, and that continues today: its forward P/E ratio clocks in at just 10.7, well below its five-year average of 12.5.

FedEx Corp. (FDX) yields just 0.6%, which means it flies below most dividend investors’ radar. But after years of meager $0.01-a-year growth, the dividend caught fire in 2014, when the company boosted it by 33%. A 25% jump followed last year. 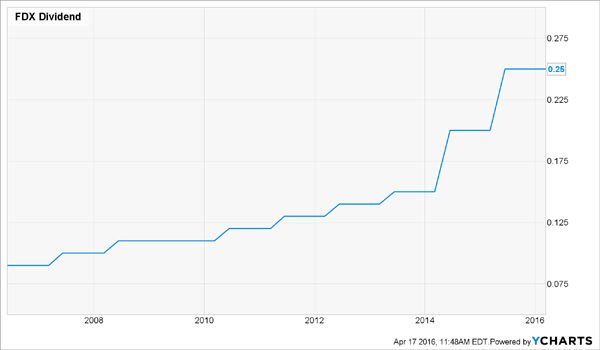 Barron’s recently forecast a 20% dividend increase (FedEx usually hikes its payout in early June), and I think that’s a given. Big earnings growth is definitely on the horizon, as online retailers snatch more market share from brick-and-mortar stores—filling up FedEx’s trucks in the process.

The shares are already up nearly 13% year-to-date, but the market still hasn’t fully priced in FedEx’s growth potential: its forward P/E ratio is 13.9, below its five-year average of 16.2. Order up some shares today.

Gilead Sciences (GILD) yields 1.7% and just started paying a dividend last year. But with four quarterly payouts now under its belt, shareholders are due for a raise—and that’s all but a done deal when the hepatitis C drug maker reports on April 28.

The company is a free cash flow machine, generating $3.20 per share in Q4, more than seven times the $0.43 a share it paid out in dividends.

Investors are worried about new competitors in the hep C market (that’s reflected in the bargain-basement forward P/E ratio of 8.1), but the company’s main treatments for the disease, Harvoni and Sovaldi, still dominate.

And even after its dividend and share buybacks, Gilead has plenty of free cash flow left over to build its pipeline and/or make a big acquisition. A healthy balance sheet, with $14.6 billion in cash and short-term investments, helps, too.

The company is in the process of closing its $13.6-billion merger with Starwood Hotels and Resorts Worldwide (HOT), a deal that would create the world’s biggest hotel chain, with powerhouse brands like Sheraton and Ritz-Carlton.

The shares yield 1.9%, but Marriott has more than doubled its payout in the past five years, and it has room for more, considering dividends represent just 29.5% of its profits. Earnings are soaring, too, which will drive the payout even higher. 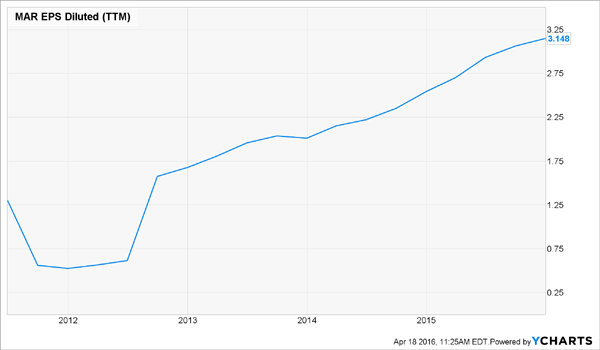 The kicker? Marriott trades at 18 times its forecast earnings in the next 12 months, a discount to its five-year average of 22.6 and competitors like Hilton Worldwide Holdings (HLT), at 22.6, and Hyatt Hotels (H), at 31.8.

MasterCard (MA), like FedEx, has an unimpressive 0.8% yield. But dividend growth is a different story: over the past five years, it’s ramped up the quarterly payout by an incredible 1,167%!

Also like FedEx, MasterCard’s riding an unstoppable trend. In the payment processor’s case, that’s the shift toward a cashless society.

Wall Street expects a slight earnings decline in Q1, to $0.85 a share from $0.89, but don’t bet against an upside surprise: MasterCard has blown by consensus forecasts in three of the last four quarters (meeting them the other time), by as much as 16%.

The shares are never cheap and currently trade at 24 times forward earnings. But that’s fair in light of MasterCard’s growth potential. This is one stock you can buy and forget about.

Sure, they’ll eventually make up for that through dividend hikes, but why settle for higher future payouts when you can have high yields now and rising dividends for years to come?

That’s what you get in the three stocks I’m urging my readers to buy right away. They yield far more than Apple and Gilead: I’m talking payouts of 6.6%, 7.0%—even 8.9%!

And thanks to an exploding megatrend, I fully expect these rich payouts to double in the next decade (one of these companies even hikes its payout every quarter instead of every year). That means you’ll be a collecting 10%+ cash yield on your initial investment in no time.

Go right here and I’ll give you the names and ticker symbols of these three bargain-priced dividend growers now.