There are two easy ways to make sure your portfolio beats the market averages, and most professionals too. The first you already know: Buy dividend payers, preferably those that boost their payout annually. The second is just as simple…

Buy the dividend raisers that analysts hate the most.

We see it repeatedly – the highest rated stocks lag the dogs. When every analyst is already bullish, the only possible change in grade is a downgrade!

Bespoke Investment Group ran the numbers for the first quarter of 2016. The S&P was roughly flat (up 0.8%), while the biggest dividend payers rolled (soaring 10.2% collectively).

In this contrarian income spirit, let’s apply some thoughtful second-level analysis to five hated high yields. These payouts are well secured, and any good news from their somewhat-maligned businesses could send shares up 20% or better.

Most investors realize the brick-and-mortar sales model for GNC Holdings (GNC) is slowly being eaten alive by the Internet. Revenues have been flat since 2014. Analysts are pessimistic – only 5 of the 13 who cover GNC rate it a Buy.

But GNC can rally 20% or more if it merely delivers mediocre results. The stock trades at a bargain 9.4-times free cash flow (FCF), and management dished 21.7% of its market cap back to shareholders last year in the form of dividends and buybacks. The company has retired nearly one-fifth of its shares since the beginning of 2014, and continues to repurchase them at an accelerating rate. Meanwhile shares pay a 2.3% dividend today. 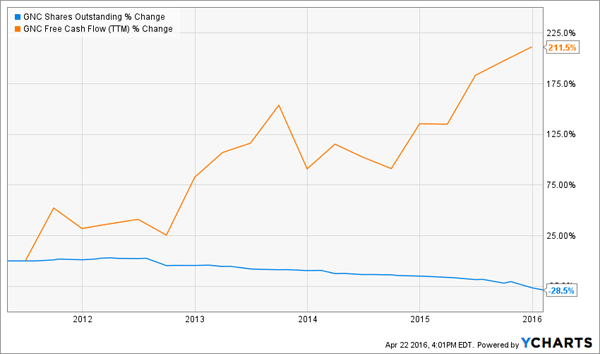 GNC is expanding its offerings beyond its traditional “muscle head” base. The firm now sells nutritional supplements such as fish oil and supplements. These new offerings have helped drive three consecutive quarters of positive same-store sales.

It won’t take much to drive a positive stock trend. Last Thursday, research firm Wedbush started coverage on GNC at outperform. The stock gained 2% – showing why it’s nice to have doubters.

Allied World Assurance (AWH) is an unpopular insurer. Less than half of the 9 analysts who cover the stock rate it a buy, and shares trade for just 92% of book value – another classic contrarian indicator. Over the last ten years, investors who bought AWH when it traded below book were rewarded nicely: 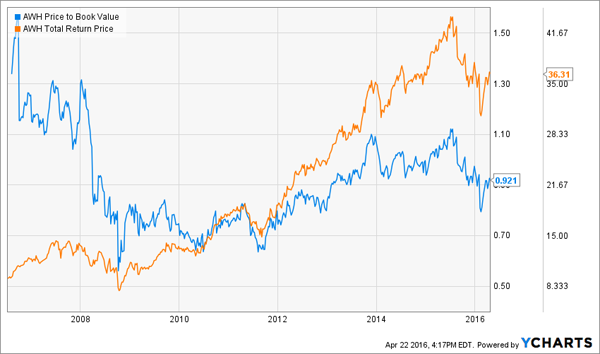 Last week, the company reported disappointing sales numbers for the first quarter – and the stock barely budged. Management thinks the stock is too cheap, too – they’ve repurchased $66.7 million of the company’s shares since the start of the year (2% of the total outstanding).

Over the last ten years, they’ve been timely buyers. In total they repurchased an amazing 50% of all shares – literally half the company – while the stock returned 287.4% including dividends.

Like many insurers, AWH prefers higher interest rate environments, which let them earn more on the premiums they invest. But the “smart money” is now betting on at least one rate hike between now and December – and that could be just the catalyst for AWH.

Regular readers know that I’m bearish on oil in the short-term, primarily because of the extreme bullishness money managers have for crude today. But I do believe that eventually oil will trade higher rather than lower, and when it eventually bottoms my preferred blue chip will be Exxon (XOM). Which is fitting, because it’s extremely unpopular with analysts! Only 8 of the 25 suits that cover it rate Exxon a Buy. And while I agree it’s not a buy yet, I doubt these guys are running the same second-level analysis I am regarding oil prices.

Exxon is actually the most maligned name in big oil among analysts, which is surprising given that it’s the only firm able to fund its current dividend from profits.

Most Big Oil Payout Ratios Are > 100%… or Worse, Negative

When energy prices finally stabilize, Exxon will be the most frequently upgraded name of the lot.

General Motors (GM) isn’t getting much love from onlookers who keep waiting for the auto market to stall. But the company just floored past analyst expectations last week by more than doubling profits year-over-year.

Shares trade for less than 5-times earnings and pay a healthy 4.7% dividend. GM will likely boost its dividend again later this year, and has plenty of room to do so thanks to a modest 22% payout ratio.

The American vehicle fleet is a little rusty at the moment, too. Right now the average car on US roads is 11.5 years old, a new record, according to automotive research firm IHS.

And Chinese car sales should pick up heading into 2017. Drivers in China hang onto their wheels for an average 4.8 years. Poor new-car sales in 2011 are partly to blame for current weakness. But investment firm Credit Suisse sees a return to double-digit growth as soon as next year.

Finally analysts continue to pan Marriott International (MAR) –Raymond James downgraded it since our previous coverage just last week. The good news is that only 11 out of 24 analysts who cover the business hotel chain have it rated a Buy – so there aren’t many potential downgrades left.

Wall Street had been concerned about the potential threat posed by Airbnb and other vacation rental sites. But most Marriott customers are business travelers who aren’t inclined to rent somebody’s personal apartment when they’re on the road.

Now, analysts are pouting that Marriott’s purchase of Starwood Hotels and Resorts Worldwide (HOT) will be earnings-neutral through 2018. But patient investors will have plenty of synergies to enjoy in the meantime – from economies of scale, to the joining of Marriott’s leading loyalty program (55 million members strong) with Starwood’s (21 million members).

Plus, Marriott has a great business model. It doesn’t own much of its real estate – instead, it rents its brand, provides overhead help like reservations, and collects fees from its operators. It’s more recession-proof than other hotels, and cheaper too at just 18-times forward earnings. Shares yield just 1.5% today, but Marriott has more than doubled its payout over the last five years. And it has room for further increases, with a modest 29% payout ratio today.

Billionaire Howard Marks – the smartest money manager most investors have never heard of – believes the most important analysis is this type of “second-level thinking.”

He explained that while first-level thinking says, “It’s a good company let’s buy the stock”…

Second-level thinking says, “It’s a good company, but everyone thinks it’s a great company, and it’s not. So the stock’s overrated and overpriced; let’s sell.”

Likewise if everyone thinks a dividend payer is a dog, and it’s not, then the issue may be underrated and underpriced.

Using Marks’ methodology, I found three second-level stocks paying 7.5% dividends or better that are all poised to double in the years ahead. They have limited analyst coverage, which makes right now the best time to buy them. Click here and I’ll share the details on these companies, including their names, tickers and my exact buy recommendations.