3 Buys to “Squeeze” Amazon for an 8% Dividend

I’m always shocked when dividend investors ignore tech stocks. Which means I’m shocked a lot, because pretty well all income-seekers do it!

That’s because most folks still think of technology as the home of profitless startups, crumbling crypto platforms or zero-dividend names like Tesla (TSLA) and Amazon.com (AMZN).

But the truth is, big caps dominate the tech space, and on the whole, the sector is sitting on some of the biggest cash hoards on Wall Street. Apple (AAPL), of course, holds a legendary $202 billion. As of February, that amounted to more than 7% of the cash holdings of all S&P 500 companies!

The problem? These companies are in no hurry to hand that cash over to us dividend investors. All pay low (or no!) dividends.

But there is a “backdoor” way for us to tap these firms’ cash holdings for big payouts. I’m talking yields north of 5.7% here, and even as high as 8%!

Our route to these big, overlooked tech payouts runs through an oft-overlooked asset class called a closed-end fund (CEF). These vehicles are a bit like ETFs, in that they trade on the open market, and many CEFs hold the household names we know well, including Big Tech.

But that’s where the similarities end. Because unlike ETFs, CEFs offer us big payouts, with yields of 7% and up common in the space. What’s more, because CEFs’ share counts remain roughly the same throughout their lives, they often trade at levels different than the value of their portfolios. These “discounts to NAV” are an inefficiency we can take advantage of.

Below I’ve ranked three top high-yielding tech CEFs for you to consider now, ranked from worst to first in order of appeal. And thanks to the selloff we’ve seen in the tech-heavy NASDAQ this year (which has only just begun to reverse with the recent bounce) we’ve got a nice extra opportunity for upside in tech CEFs as investors begin to file back into the sector.

When it comes to CEFs, we demand an attractive valuation, a strong portfolio, good past performance and, of course, an attractive dividend.

STK certainly has what we want in its portfolio, which is full of strong cash flow generators like Apple, Microsoft, chipmaker Broadcom (AVGO) and testing-equipment supplier Teradyne (TER). It also ticks the performance box, with a 14.7% annualized return since it was launched in 2009.

But STK is just a little light on the dividend front (for a CEF), with a 5.7% yield. However, we’ll cut it some slack here because it does pay out the odd special dividend, including a recent payout to investors in January.

So if STK is such a great fund, why does it slot into my No. 3 spot? One word: discount—or lack thereof. As I write this, STK trades at an 11.7% premium to NAV, so investors are actually overpaying for this fund. Worse, its current premium is well above the 2.25% premium STK has averaged over the last five years. That means you should put STK on your watch list now, but due to its high quality, be prepared to buy it on major dips.

The good news? Those dips happen regularly: the fund traded at a slight discount to NAV as recently as June 28.

Our next fund shares most of its ticker with its ETF cousin, the Invesco QQQ Trust (QQQ), an ETF that holds all the stocks in the NASDAQ 100. But adding an “X” unlocks stronger recent performance and a much higher yield (8% for QQQX, compared to a practically nonexistent 0.6% for QQQ).

Remarkably, QQQX delivers that outsized payout while holding the same stocks as QQQ—all the big names of the NASDAQ 100. But it has a couple tricks up its sleeve that its ETF cousin can’t counter. One is the fact that QQQX sells call options on its portfolio. This is a smart way to generate extra income, especially in a volatile market.

This savvy strategy, which works best in volatile markets, was the main reason why QQQX topped its ETF cousin coming out of the COVID crash. It’s also why we can tap the fund for that rich 8% dividend. 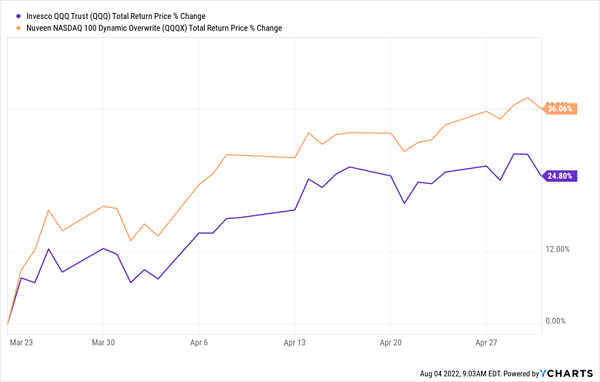 The only snag, again, is valuation: although it’s not as egregiously overpriced as STK, QQQX does sport a 3.6% premium as of this writing, which is a touch above its five-year average of around 1%. That doesn’t necessarily preclude a buy today, but you might want to wait for QQQX to dip below that 1% number before making a move.

Now on to my top pick among these three. BST is a familiar name to members of my CEF Insider service, mainly because of its 8% yield and its monthly dividend, which has more than doubled in the last five years (and as you can see below, BST is no stranger to special-dividend payouts, either):

BST’s Dividend Has It All: an 8% Yield, a Monthly Payout and Strong Growth 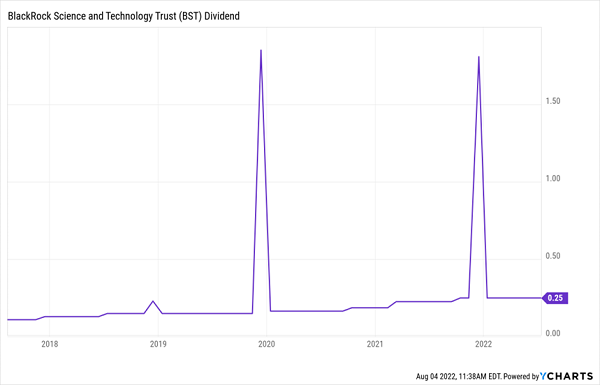 Like our other picks, BST holds high-cash-flow tech companies like Apple, Microsoft and Amazon, in addition to other growth stocks, like payment processors Visa (V) and Mastercard (MA), whose vast networks (and the fact that they simply process payments, rather than loaning money) make them more tech than financial plays.

And we get another oft-overlooked advantage with BST: the management acumen of BlackRock, the world’s biggest and most powerful financial firm. With over $10 trillion in assets under management, it has access to market data and changes in the global marketplace that no one else can match. BlackRock has translated that into strong market outperformance with BST: 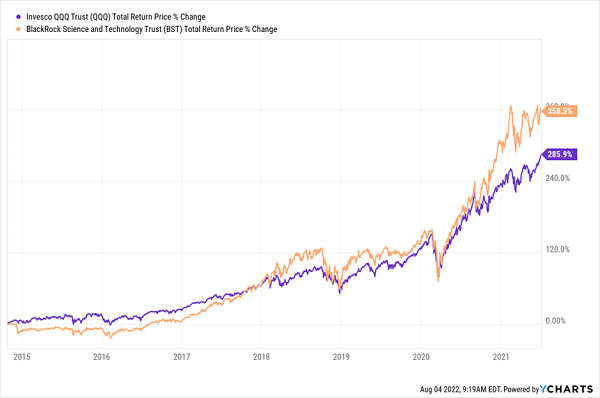 Now it is true that BST trades at a slight premium to NAV right now (0.7%, pretty much equal to its five-year average of 1%). So while we’re not getting a huge discount upfront here, we still like BST’s odds of posting strong price gains because it easily ticks our other boxes—and especially because of the massive management advantage it has in BlackRock.

Here’s something else to bear in mind: this one has traded at 9%+ premiums on a number of occasions over the last five years, and there’s a strong chance it will hit those levels again as the tech rebound picks up.

I know it’s a bit rich to say that CEFs “force” companies to pay us big dividends. After all, no one is actually compelling Apple, Amazon and the like to do so!

But the effect is exactly the same as it would be if we were getting those big payouts straight from the companies themselves: if we buy these stocks through CEFs, we get dividends with yields that can ring in at 8% or higher.

And CEFs come in all varieties, holding US and international blue chips, corporate bonds, REITs—you name it.

That means we can assemble a diversified portfolio of these terrific income plays and give ourselves a shot at doing something most folks think is impossible: retiring on dividends alone, without having to sell a single stock!

In fact, I’ve assembled just such a CEF portfolio, and I’d like to share the details with you right here. This collection of 5 diversified funds yields 8.6% on average, enough to pay you $43,000 a year on just a $500K investment.

The time to buy these unloved funds is now: they’re so undervalued (sporting big discounts to NAV as I write this), that I expect them to surge 20% in the next 12 months—and that’s in addition to their rich 8.6% average dividend payout!

Go right here and I’ll give you my research on these 8.6% payers, including their names, tickers and everything else you need to know, in an exclusive Investor Report.