Four highly profitable REITs in particular are yielding 4% and up today. We’ll discuss them in a moment.

Interest rates are rising, and “common wisdom” says it’s a bad time to buy REITs because they behave like bonds. Wrong.

As long as the economy keeps chugging along, and these specific rents are getting paid, then the dividends are going to continue being dished. Period. And we’re all about the dividends here at Contrarian Outlook.

S&P Global research notes that rising interest rates “are frequently associated with economic growth and rising inflation, which can indeed be a boon for the real estate sector. Specifically …

While that’s encouraging from a broad-strokes perspective, we obviously only want the best of the best. Well, here they are:

A Four-Pack of Promising Picks 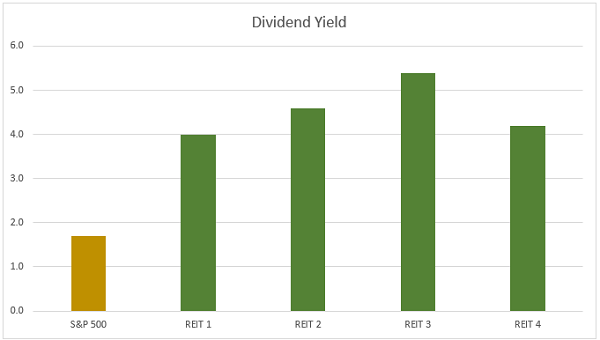 Let’s dive into these generous dividend payers one at a time.

No surprise that Realty Income (O) headlines a list of high-quality REITs that are bouncing back with the market-at-large.

Realty Income has built its name on being a monthly dividend payer. As I write this, O boasts 625 consecutive monthly dividends, but of course, I expect that to change here in a few weeks… and every month after that. Moreover, it’s a Dividend Aristocrat that has upped the ante on its payout 116 times since coming public in 1994, including 98 consecutive quarterly increases.

It has provided that combination of dividend longevity and improvement thanks to a vast portfolio of more than 11,000 properties that, importantly, are under long-term net lease agreements. The “net lease” part is the key here. Realty Income doesn’t deal with insurance, it doesn’t mess with maintenance, and it doesn’t mess around with taxes—tenants are on the hook for all of that.

The REIT is coming off a fantastic first quarter that saw revenues soar 82% and adjusted funds from operations (FFO, an important real estate profitability metric) jump 14% year-over-year. But importantly, Realty Income took a massive step outside of its comfort zone. O announced in February that it had agreed to buy Encore Boston Harbor Resort and Casino from Wynn Resorts (WYNN) for $1.7 billion under a long-term net lease agreement—if completed, that would be Realty Income’s first casino property.

This has long been a consistency-and-dividends pick with a yield (4%) that’s frequently above the REIT-sector average. But its newfound aggression puts the possibility of brisk growth in play, too. 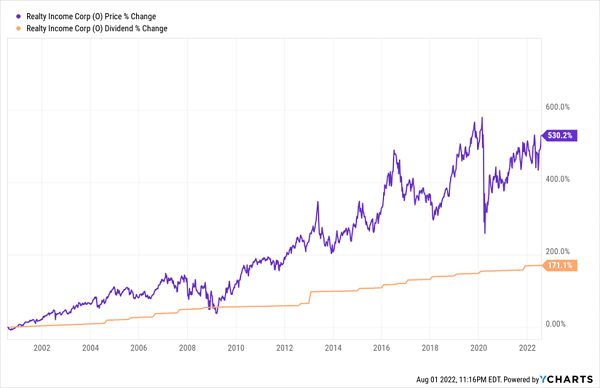 Realty Income’s success is hardly an outlier. Prior to the recent uptick, net-lease REITs were already the top-performing real estate industry year-to-date, down just more than 6% vs. an 18% decline for the FTSE NAREIT All Equity Index, according to an early July note from Raymond James.

So you won’t be surprised when I tell you another net-lease REIT–National Retail Properties (NNN)–looks like a shining example in the space.

NNN isn’t quite as big as Realty Income, but it still has massive scale at roughly 3,300 properties leased out to 370 tenants across 48 states, and at a 99%-plus occupancy rate, no less. No tenant makes up more than 5% of the portfolio, and for those concerned about stability, some of these would survive an apocalypse: 7-Eleven, BJ’s Wholesale, Fikes.

That has fueled persistent growth in National Retail Properties’ dividend, which has improved annually for more than three decades. That includes a recent 3.8% raise to 55 cents per share quarterly.

Q2 earnings will be out soon, and the company hopes to build upon a strong first quarter that saw AFFO per share expand by 4% to 79 cents per share. Meanwhile, the company should see full-year AFFO push forward by more than 6%, says Raymond James. It’s an exhibition of solidity: Something that, combined with a 4%-plus yield, should entice plenty more investors throughout the rest of the year, especially if the market starts to wobble again. 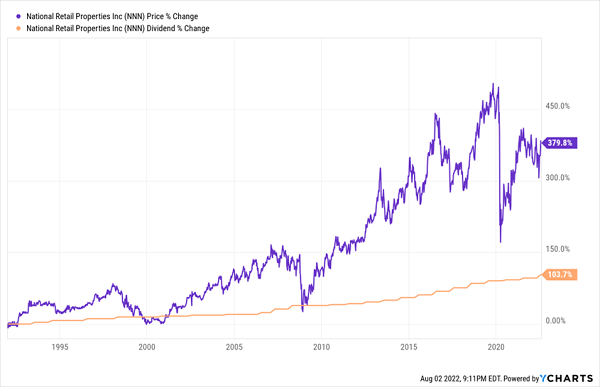 The former came to life in November 2013 when it was spun out from Penn National Gaming (PENN). And while casinos might make you think of Las Vegas, none of GLPI’s 55 gaming and related facilities are located in Sin City—and indeed, just three are within Nevada. The other 52 are spread out across 16 states, including Ohio, Maine and Louisiana.

VICI—also a spinoff, from Caesars Entertainment (CZR)—does boast several iconic Vegas spots, including Caesars Palace, Mandalay Bay, MGM Grand and The Venetian. But again, most of its portfolio is regional, spanning Indiana, Mississippi and Massachusetts.

Pure-play gaming operators have struggled mightily since the start of the COVID bear market, with the likes of Las Vegas Sands (LVS) and Wynn Resorts (WYNN) still worth roughly half what they were a couple years ago. But you wouldn’t know that to look at GLPI and VICI, which are splashing cash and living large.

Gaming & Leisure Properties, for instance, recently announced it would purchase two Bally’s properties—Bally’s Twin River Lincoln Casino and Bally’s Tiverton Casino & Hotel—for $1 billion, with a contingency plan to buy Biloxi’s Hard Rock Hotel & Casino if they can’t close on the Lincoln casino on time. (And even then, they’ll still have an option until the end of 2024 to buy Lincoln.) Raymond James notes that the deal should be immediately accretive to AFFO, giving the gaming player a growthy jolt in the arm to go with its 5%-plus yield.

VICI Properties, meanwhile, closed on its previously announced buyout of MGM Growth Properties (MGP) in April, which the company says made it America’s largest owner of hotel and conference real estate. But it’s hardly done firing off capital. The company is providing loans toward developing Great Wolf Resorts properties and building future BigShots golf properties. And it can afford it. Like many REITs, many of VICI’s leases include rent bumps, and RJ notes that a little less than half of its rent will enjoy CPI-linked bumps this year, which “should push VICI’s internal growth to be among the highest in net-lease.”

So you have a pair of income-minded plays that both have substantial growth potential. But what about the cash?

A Clear Leader Between the Two 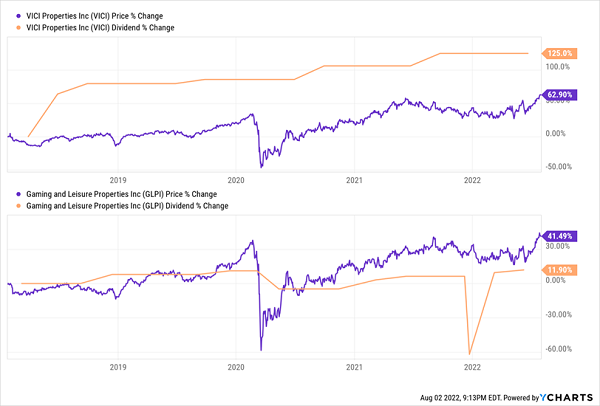 From a dividend-growth perspective, VICI is head-and-shoulders the better option. But I think we can—and should—do better than the above-average 4% or so that the gaming name offers.

When we retire, we need two things:

And that means you need the “A” squad: diversified, reliable payers of mouth watering yet dependable income that don’t knuckle under every time the economy throws a fit.

Fortunately, you can find these rare monthly dividend blue chips in my “7% Monthly Payer Portfolio.”

Many of the picks in my “7% Monthly Payer Portfolio” leverage the power of steady-Eddie holdings to generate massive yields, while also fostering the potential to generate aggressive price performance.

It’s simple math: Even if you have just a $500,000 nest egg—which is less than half of what most financial gurus suggest you need to retire—putting it to work in this powerful portfolio now could kick-start a $35,000 annual income stream.

Even better? The market’s recent antics have provided us with a rare gift, pulling all of these monthly dividend stocks back into our “buy zone,” where we can grab them at bargain prices. Click here to learn everything you need about these generous monthly dividend payers right now!