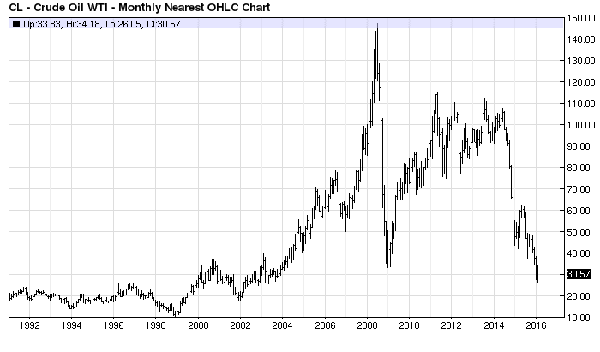 As long as money managers are making bullish bets on oil, the price is going to stay low or head lower. I warned you when crude was at $100 and again at $45 that it was going to crash for this very reason. And today, these guys still hold 72,000 long contracts (which are bets on higher crude prices). The goo is going lower yet before it heads higher.

Domestic big oil companies have already been significantly hurt by this pullback. But they haven’t been the only ones suffering. Globally, oil producing countries like Argentina, Iran, Nigeria, Saudi Arabia, China, and Russia have all seen their net income plummet.

As many of these nations rely upon oil sales to fund their budgets, they need higher prices. Problem is, demand is down and production is up –  putting inventories at all time highs: 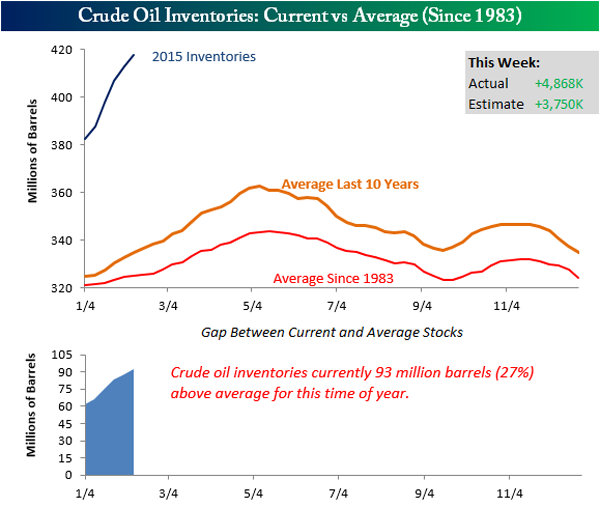 Crude oil inventories are 27% higher today than their ten-year averages. This is a huge build-up that isn’t going to disappear quickly. The simple economics of oversupply and lack of extra demand are at work here.

Growing inventories aren’t just a U.S. problem. Globally, oil stocks are 15% larger than last year at this time. Check out this supply chart from the International Energy Agency – supply just keeps marching up and up and up:

The biggest problem amongst these international producers is that they have much less boardroom and shareholder concern for their dividend payments.

Recently we talked at length about our domestic producers Chevron Corporation (CVX) and Exxon Mobil Corporation (XOM) – and how their management have been very clear that they see dividend payments as a value proposition for their shareholders.

These companies have made a commitment to holding their payouts amidst declining profits. They have shored up credit lines, cut costs, and slashed workforces in order to preserve their payouts.

I don’t expect the same level of commitment from overseas producers.

The Next Three Energy Dividends To Get Cut

Ecopetrol SA ADR (EC) is an integrated oil and gas producer in Columbia. They produce 60% of the country’s energy in addition to exporting to Brazil, the U.S. and Peru. Over the past year Ecopetrol has lost 66% of its market value.

The company pays an annual dividend – in 2015, it paid $1.04 per share. Financial websites are reporting a stated yield of 15% for Ecopetrol, which they’re calculating by dividing this payout into the company’s current share price.

Problem is, the company only earned $0.28 per share over the last 12 months. Which means management will most likely cut its dividend by 75% or more year-over-year, to avoid a negative payout ratio at minimum.

The company added $3.4 billion in financing in 2015, which was badly needed because the firm had just $1.34 in cash per share. Ecopetrol believes that their credit lines combined with the aggressive plan to reduce expenditures, cut investments, and trim operations should help it weather the downturn.

But in a brief, the company stated that things “depend on crude oil price evolution.” In other words, they need higher oil prices ASAP or they’re in trouble. This company already cut its dividend in half from 2013 to 2014 – expect a repeat of that soon.

Statoil ASA ADR (STO) is a Norwegian-based global oil producer. This week the company delivered a miss on earnings and a 26.5% plunge in revenue for the last quarter.

In their recent quarterly report, the company affirmed its $0.88 dividend yielding 6.6%. But even with drastic cuts, Statoil’s break-even per barrel is $41. That’s simply not sustainable.

Like oil firms I’ve profiled in the states, Statoil saw its income per barrel decline 42.6% over the same period last year. It’s hard to prepare for that kind of earnings shock.

Statoil even warned investors that it would see an equity decline as it preferred to focus on cheaper production over pure volume. That’s bad for the bottom line, but it makes sense for a company that is struggling to add more capacity.

With older fields slowing down, Statoil is investing in a number of new fields globally. It just brought new Algerian natural gas production online. Unfortunately, these capital expenditures are going to cut into reserves and will put even more pressure on the dividend.

The company’s newly increased size gives it an advantage when it comes to financing its dividend. As with many mergers, Repsol is divesting itself of assets and cutting staff. Their merger is essentially a jumpstart on an aggressive cost cutting program.

But that doesn’t mean it will work. Mergers are expensive and deplete cash reserves and lines of credit. Last month the company reported a major writedown of $3.15 billion to offset oil declines in revenue. In addition to the impairment, it stated it would cut investments by another 20%.

The impairment shocked some analysts on how close it came on the heels of the merger. But as I’ve been saying, the oil industry just isn’t pricing in $30.

If Petroleo Brasileiro SA Petrobras ADR (PBR) paid dividends I’d be adding it to this list almost immediately. Its finances have been shaky for a while and the current conditions aren’t doing it any favors.

The saving grace for many of the global oil firms is that many of them are majority owned by the countries they’re based in. These “benevolent owners” may require their cash cows continue making payments to support their economy.

It’s always a possibility with state-owned firms. But more likely is that these firms cut costs and their dividends.

I touched on BP plc ADR (BP) last week and how it had taken aggressive cost cutting measures to avoid touching their dividend. I’m still watching it for additional signs of weakness along with Total SA ADR (TOT). Both firms are still showing me the same unrealistic outlook as their industry peers.

Safer 7% Yields You Can Buy NOW

Oil is an absolute necessity in every corner of the globe and the sector will certainly be ripe with buying opportunities once prices stabilize. Until that happens, I’m raking in much bigger – and safer – yields in another sector that’s capitalizing on the biggest demographic shift in U.S. history.

You see, no matter what happens to the price of oil, the outcome of this year’s election, or even China or the Fed, there’s one sure economic bet in America: The country will be older in the future than it is now, and demand for healthcare services is set to skyrocket.

They pay yields of 7.7%, 8.3%, and 9.2%, and all three are increasing earnings and their dividends annually. Click here for the names of all three and discover exactly how we’re playing the biggest demographic shift in U.S. history.