3 Monthly Dividend Stocks to Buy Now – and 1 to Avoid

Plenty of investors ask me about monthly dividend stocks—and with good reason. After all, who doesn’t like their dividends rolling in when their bills do?

It’s a heck of a lot easier than trying to manage the uneven income stream you get from a portfolio of solely quarterly payers. But convenience isn’t the only reason to like stocks that pay dividends monthly.

Another is that monthly payouts signal a confident management team. Shareholders revere dividends, after all, and if management’s fine with getting them hooked on a monthly cash stream, they must be sure they can keep those checks coming—without any nasty surprises.

We Can Do Better Than the Obvious Choice

In a moment, I’ll reveal three monthly payers that are great buys now.

But before I do, let’s talk about the one monthly dividend stock everyone knows: Realty Income (O), a retail real estate investment trust (REIT) so enamored with the concept that its slogan is “the monthly dividend company.”

There’s another reason why O gets so much love from investors. It’s known for raising its dividend every quarter—and sometimes more often than that: 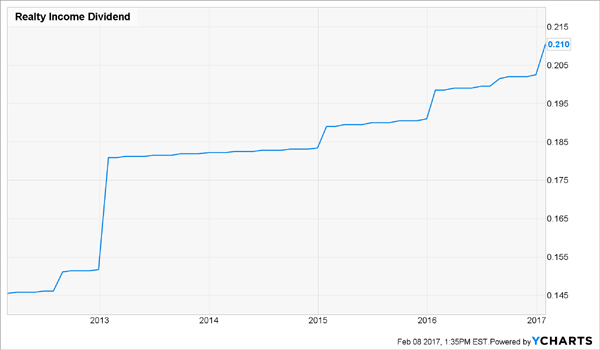 What’s more, the funds from operations (FFO; a better measure of REIT performance than earnings) backstopping that payout are rising steadily: 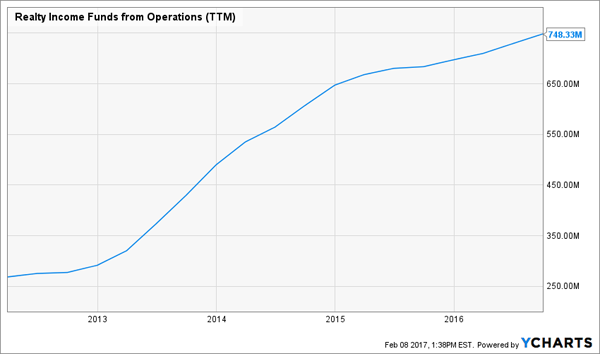 The downside is that many other monthly dividend fans know all this, which is why O looks fully valued at 21.3 times trailing-twelve-month FFO. And the 4.0% trailing-twelve-month yield—while double what you get from the average S&P 500 stock—is below its five-year average of 4.5% and the payouts on the three investments I’ll show you now.

These three are all trading at attractive valuations, to boot. So let’s dive in, starting with…

Apple Hospitality Trust (APLE) is a REIT with 236 hotels in 32 states.

Lodging REITs have soared post-election, as investors bet that travelers will hit the road with the uncertainty of the vote in the rearview, but Apple Hospitality hasn’t bounced as high as the rest of the pack. 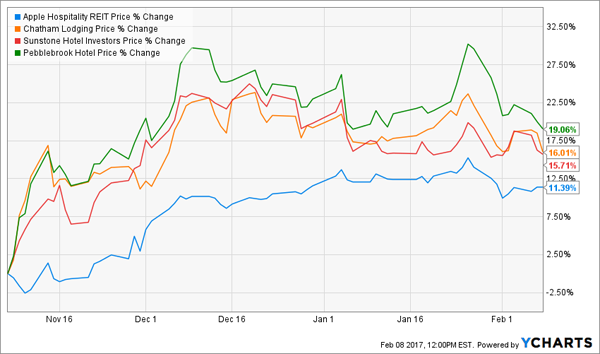 Today, it trades at a reasonable 11.3 times trailing-twelve-month FFO, even though it reported a nice 6.5% year-over-year increase in FFO in the third quarter.

Investors may be fretting over a slowdown in growth of revenue per available room (revPAR), another key metric, to 1.8% in Q3 from 6.4% a year ago.

But Apple’s occupancy rate held steady at 80%, and the industry average is around 66%, according to Statista.com. And it should benefit as corporate earnings rise, prompting more company staffers to head out on business trips. According to FactSet, analysts see S&P 500 profits growing 11.1% in 2017.

STAG Industrial REIT (STAG) is an industrial REIT with a market capitalization of just $1.7 billion. It owns 241 factories and warehouses across the US, totaling about 50 million square feet.

The stock boasts a higher payout ratio than Apple Hospitality, at 88.9% of FFO, but a well-run REIT—as STAG is—can maintain a figure like that and still keep its dividend safe. Plus, the FFO behind that dividend is on the upswing. 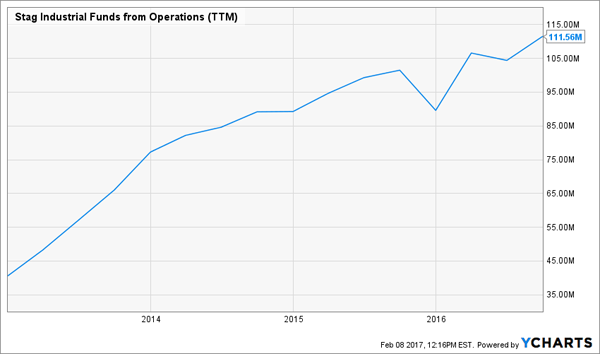 However, the company boasts an occupancy rate many REITs would envy: 95.3% in the third quarter. Management also doesn’t hesitate to swap out weaker properties for stronger ones: in November, it unloaded six buildings for gross proceeds of $81 million. And in Q3, it added 13 others (or 13.7 million square feet) that were 100% occupied.

STAG is also well diversified, with its main geographic market and its biggest tenant accounting for small percentages of annualized base rental revenue: 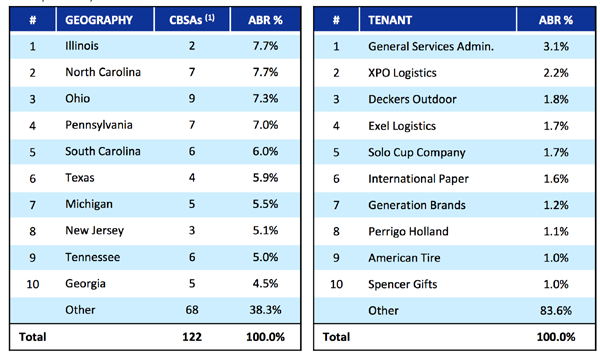 Finally, STAG trades at a reasonable 15.5 times FFO and is no slouch on the dividend front, either: the $0.117 monthly payout yields 5.9%.

As you may have guessed by now, the universe of blue chip stocks that pay monthly dividends is rather small. REITs are one place to look. But there’s another way you can collect monthly dividends, grab outsized yields and hold the household names of the S&P 500 at the same time.

I’m talking about closed-end funds (CEFs). They look a lot like your typical mutual fund, but unlike mutual funds, CEFs trade on the stock market. That sets up an opportunity to buy the underlying assets at a discount.

In the last decade, GDV’s shares have beaten the SPDR S&P 500 Index fund (SPY) on a total-return basis. The gap isn’t wide, but keep in mind that you’re getting a much bigger percentage of that return in cash, thanks to GDV’s dividend, which currently yields 6.4%, compared to just 2.0% for SPY: 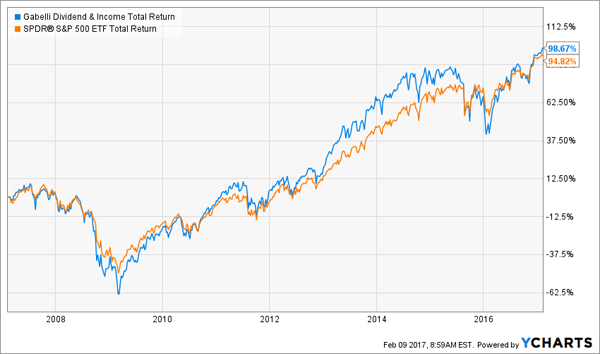 Let’s take a look at how GDV delivers that 6.4% payout.

The answer lies in legendary portfolio manager Mario Gabelli’s savvy stock picking, which delivers capital gains, and his modest use of leverage to juice his fund’s yield with little additional risk (GDV borrows money for just 1%).

Of course,  Gabelli’s expertise doesn’t come cheap: the fund’s management fee clocks in at 1.4%, far higher than you’ll pay on a passive exchange traded fund like SPY. But you don’t get a bill for Gabelli’s services; this fee comes straight out of the fund’s net asset value, so you’ll still collect GDV’s fat 6.4% yield. And these returns and yields I’ve quoted are all net of fees.

Our New Portfolio Yields a Safe 8.0%

These three investments are all terrific income plays, but I’m also watching several other high yielders with even more upside.

In particular, I’m pounding the table on 6 income powerhouses our team just found. They’re all cheap now, and each is set to post double-digit annual gains for years to come.

They may not pay monthly, but their outsized yields more than make up for that: when you combine them into a single portfolio, as our team has done, you get a safe—and growing—8.0% dividend yield!

I’m ready to take you inside this powerful new portfolio now. Simply go right here to get the details on my secret strategy and the names of the 6 rock-solid investments that make it work.