If you’re wondering which sector is set to take off in 2017 (and who isn’t?), look no further than real estate investment trusts (REITs).

I’ll get into why I’m so bullish on REITs—and name 5 great buys now—in a moment.

First, let’s look at the sector’s recent performance, and what it says about where REITs (which own properties ranging from warehouses to apartment buildings) are headed.

Here’s how the Vanguard REIT ETF (VNQ) has done since January of last year, compared to the benchmark SPDR S&P 500 ETF (SPY): 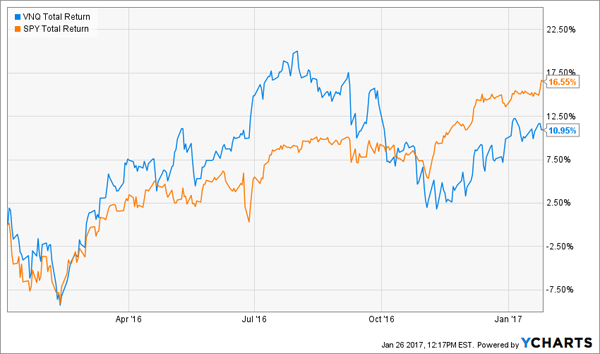 Three things stand out here: 1) REITs spiked last summer, when the Brexit vote sent investors scrambling for stability and yield; 2) they didn’t get much pop from the year-end Trump bump; and 3) they’re still way off their 2016 peak and trailing the market as a whole.

The end result: serious underperformance—and the groundwork for a nice rise in 2017.

Before we go further, let’s take a quick detour into interest rates, because they can seriously affect your REIT returns … but not in the way most investors think.

The problem? It’s just plain wrong. And if you’ve let this flawed investor slogan keep you out of REITs over the years, you’ve likely missed out on some serious gains.

Wrong. While the herd was panicking about rates, REITs quietly soared nearly 50% and clobbered the S&P 500! 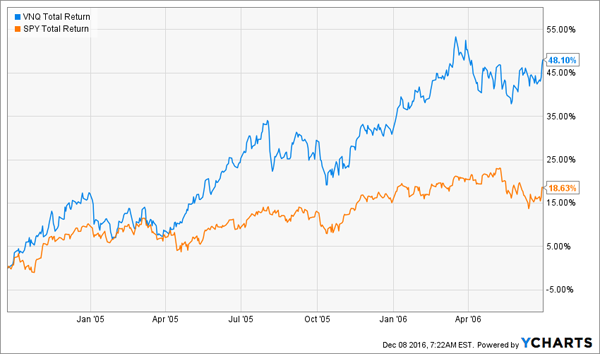 Fast-forward to today, and the pattern appears to be repeating, starting in the days following Trump’s surprise win:

A New REIT Run in the Making? 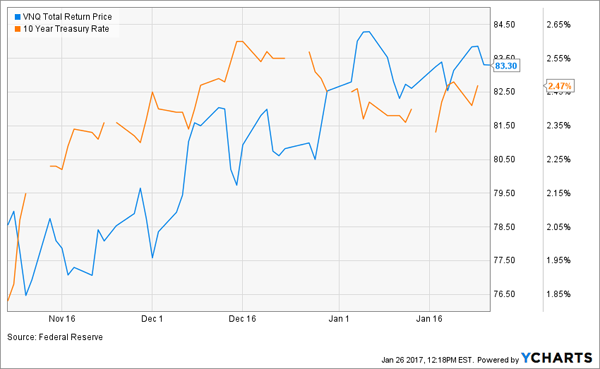 Check out how REITs fell, at first, when 10-Year Treasury yields spiked following Election Day—but then that pattern quickly disintegrated and REITs headed up.

I think that trend will continue, for a couple reasons.

For one, despite the zero-rate world we’ve been living in, many REITs have actually cut debt in recent years, according to the National Association of Real Estate Investment Trusts (NAREIT). That gives them some protection as rates head higher.

Second, REITs would benefit if Trump’s tax and infrastructure plans goose US gross domestic product, which already grew at a healthy 3.5% clip in the third quarter.

And if you think other income vehicles will lure investors away from REITs, think again. Despite the “Trump bump” in Treasury yields, there’s still a big gap between VNQ’s yield and what 10-Year Treasuries and the average S&P 500 stock are paying: 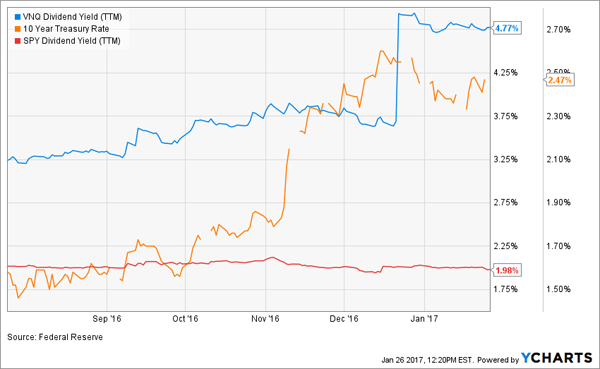 Even so, buying VNQ isn’t the best way to benefit from the coming REIT rebound, because the ETF holds some REITs that are overbought, and that could cap our gains going forward.

Data-center operator Equinix (EQIX), for example, has gained 30% since early January 2016 and is near its 52-week high. Same goes for industrial REIT Prologis (PLD), which is up 23%.

Which brings me to the well-known—and not-so-well-known—REITs I want to show you today.

The smaller fry? STAG Industrial (STAG) and Preferred Apartment REIT (APTS), with just a $2.1-billion market cap between them.

Let’s walk through some of the things you should look at when picking REITs—dividend yield and sustainability, valuation and funds from operations (FFO, a better measure of REIT performance than earnings)—and see how our 5 champs stack up, starting with yield. 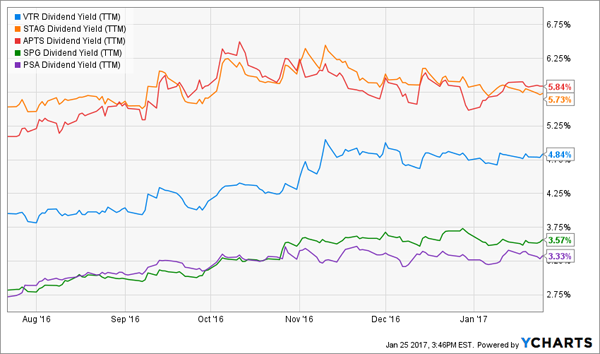 Right away, we can see that all five REITs yield much more than SPY’s 1.98%, and unlike SPY, their yields have risen in the last six months. What’s more, three yield more than VNQ, and the two “laggards,” Simon Property and Public Storage, are more than making up for it with payout growth:

SPG and PSA Crank Up Their Dividends 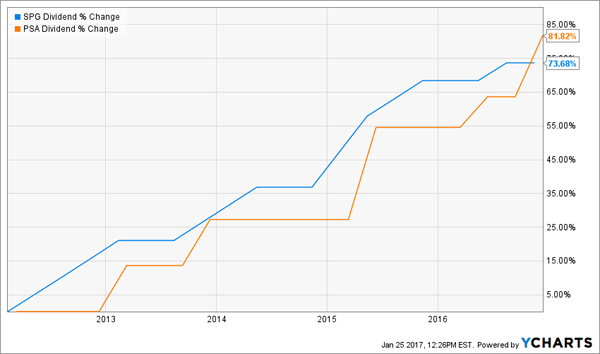 All five of these companies are also generating rising FFO, which makes future dividend growth a lot more likely. 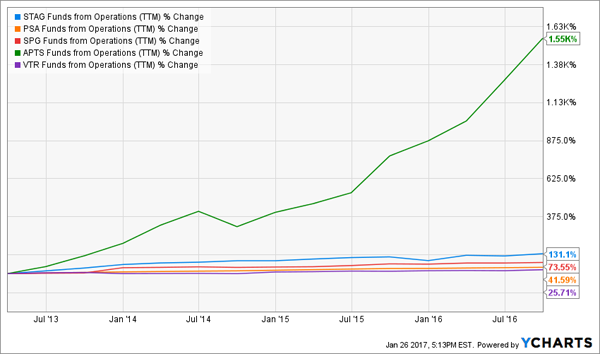 The picture gets more encouraging when you see that all these trusts are paying out reasonable percentages of funds from operations as dividends.

A well-run REIT can pay out 85% to 90% of its FFO and still keep its payout safe, so these are acceptable numbers, especially in light of these REITs’ FFO growth.

Which brings us to valuation. As I write, none of these REITs are trading near their 52-week highs, and all boast reasonable multiples to FFO:

Sure, PSA’s ratio seems high, at 23.1, but that’s not unreasonable given the self-storage industry’s potential to grow as baby boomers downsize and consumer spending rises—not to mention the REIT’s relentless dividend growth and 3.3% yield.

The same goes for VTR, which boasts a high, well-covered dividend and locked-in growth from an aging population.

Still not convinced now is the time for REITs to shine?

Here’s another reason: the Fed says it plans to hike rates three times in 2017, but investors will likely be disappointed.

What did we end up with? One measly quarter-point increase. And with the uncertainty we face today—including a president with the power to rattle markets with a single tweet—I think history will repeat.

That would send investors piling back into REITs (just like they did post-Brexit), giving our top 5 buys a nice extra push.

And they wouldn’t be the only ones to soar. Eight other investments I’m pounding the table on now would also cash in on Fed paralysis. These cheap income plays yield a gaudy 7.0% and are already poised for 12% to 38% upside … and that’s if the Fed sticks to its plan.

I’m ready to share all 8 with you now. Simply click here to learn all about this unique Trump-proof, Fed-proof portfolio and discover these overlooked income generators for yourself.