Fidelity Investments has a laundry list of highly rated mutual funds – so let’s delve into a quartet of funds that are top-tier choices for retirement investors. The recipe for retirement success includes safety, durability, income and cost-efficiency, among others – these four funds have these qualities in spades!

Fidelity Investments is the No. 2 player in the mutual fund world, boasting $1.7 trillion in total assets across its expansive lineup of offerings. Just like Vanguard – which also boasts a number of excellent retirement funds – most of Fidelity’s assets are long-term in nature.

Why is that important? Because it shows that while some of Fidelity’s funds can be used to make short-term plays, most of its mutual funds are buy-and-hold investments – in other words, exactly what you’re looking for if you’re planning out a retirement portfolio.

What really makes Fidelity stand out as an elite choice in the mutual fund world is its willingness to adapt. Fidelity was built upon the shoulders of active managers like Peter Lynch and Will Danoff, providing superior performance from the best brains in the business. But Fidelity hasn’t shied away from the growing trend toward index funds, either, and provides investors with some of the lowest-cost options available.

While I like several Fidelity funds for different investment purposes, I have my eye on four Fidelity mutual funds that hit the perfect notes for retirement. Also, several of these funds are available in corporate 401(k) plans.

Selecting a large-cap stock fund from Fidelity is no easy task. That’s because Fidelity offers two of the most celebrated actively managed large-cap funds in the business: Fidelity Magellan (FMAGX), which Peter Lynch famously led to 29% annual returns during his tenure from 1997 and 1990, and Fidelity Contrafund (FCNTX), where William Danoff has targeted underappreciated value and growth stocks alike since 1990.

You won’t go wrong with either actively managed fund. But it’s difficult to argue with Fidelity 500 Index Fund (FUSVX), whose Premium shares not only offer the returns of the S&P 500 – a difficult benchmark that most managers fail to beat consistently – but do so at expenses so light, the fund might as well be free. FUSVX shares charge just 0.045%, or $4.50 per year for every $10,000 you invest. That just undercuts Vanguard 500 Index Fund (VFIAX) Admiral shares, which charge 0.05%.

What you get with FUSEX and FUSVX is pretty straightforward: An investment in the S&P 500’s component companies, which means a group of 500 blue-chip stocks, including Apple (AAPL), Microsoft (MSFT) and Exxon Mobil (XOM).

But don’t make this mistake of thinking that the S&P 500 is a perfectly balanced index that gives you exposure to every U.S. sector evenly. For instance, information technology makes up 21% of the fund, while financials are nearly 15%. But real estate, materials and telecom stocks each make up less than 3% of Fidelity 500’s weight. 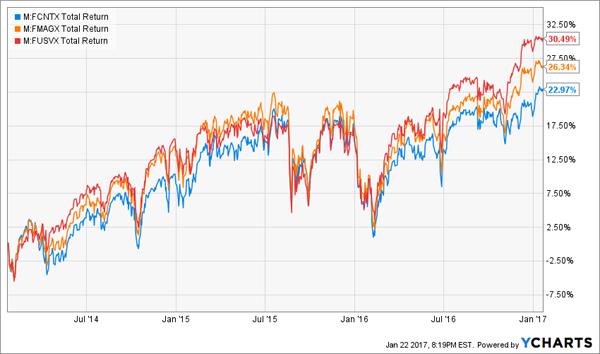 Obviously, you can never beat the market with FUSVX, but a fund that offers simply market performance is a good place to start building your portfolios’ core.

While it seems counterintuitive, understand this: Many long-held ideas about portfolio composition as investors head toward retirement were created at a time when people simply didn’t live as long as they do now. In 1960, the average life expectancy for an American was just under 70 years – now, it’s just under 79!

That means not only do you need to rethink things like equity/debt ratios as you age, but what the stock portion of that equation looks like.

More simply put, you need some growth in your retirement portfolio.

And where better to get that than technology? Technology is becoming an increasing component of most aspects of our lives. This isn’t a new phenomenon, nor does it show any sign of slowing. The only thing that changes is what technology companies are leading the charge, and that’s where adept active management comes in handy.

Fidelity Select Technology Portfolio (FSPTX) – whose 270-plus holdings include the likes of Apple and Alphabet (GOOGL) – has been under the guidance of Charlie Chai since 2007, and despite the lack of income, FSPTX’s total return has outperformed that of the S&P 500 – and handily, I might add. Since Jan. 4, 2007, Chai’s Select Technology has returned roughly 170%, vs. “just” a double (including dividends) for the S&P 500. 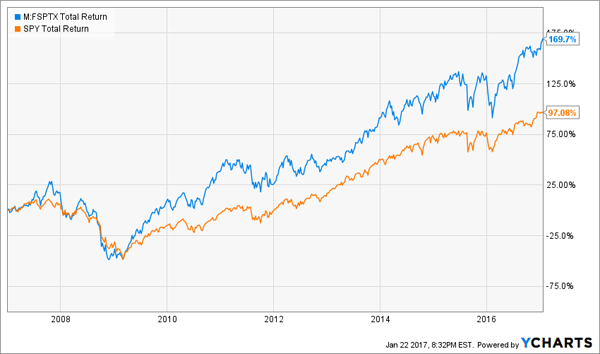 It’s rare that I recommend a fund that provides so little income, but FSPTX has proven its worth for too long to ignore it.

Fidelity Focused High Income Fund (FHIFX) is one of the best offerings in Fidelity’s fixed-income lineup, but despite the “Focused” moniker, it has one of the broadest strategies … at least in theory.

But for right now, FHIFX is staying mostly true to its name, with an 88% allocation to corporate bonds, 7% in bank debt and 5% in cash.

Now, while FHIFX invests in “junk” debt, the risk here isn’t nearly as high as the name would suggest. For one, the fund invests across 243 different bonds across 158 issuers. Second, that debt is evenly spread over a number of sectors and industries, with energy the largest component at 12%, but telecom, banks and thrifts, tech, financial services and utilities all enjoying high-single-digit weightings.

And lastly, FHIFX does invest in junk, but the lion’s share of the portfolio (82%) is in the highest-rated junk range (82% in BB), and less than 1% of its bonds are CCC or below. In other words, these are junk bonds … but decently rated junk bonds. 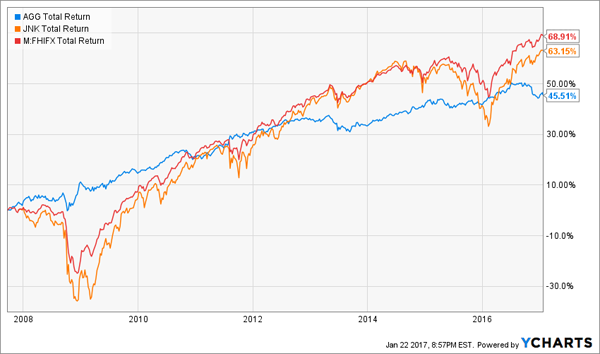 Manager Matthew J. Conti has been on board since 2004, and the fund boasts strong performance numbers not just against other high-yield debt funds, but against broader U.S. bond offerings, too.

The Fidelity Four-in-One Index Fund (FFNOX) offers investors a diversified portfolio within a single mutual fund … and it does so in a pretty odd way. That is, it’s an actively managed fund that holds index funds.

Currently, the fund is almost half-weighted in Fidelity 500, with 25% in International Equity, 12% in Extended Market and the rest in U.S. Bond. 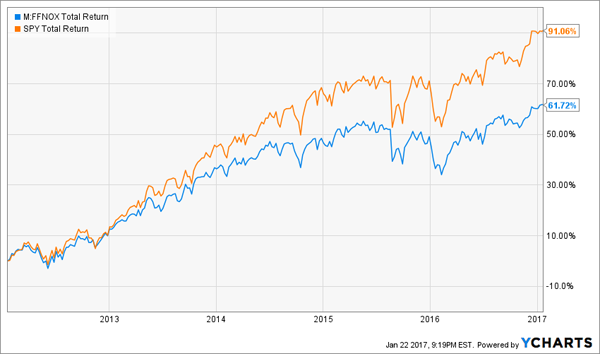 While FFNOX has underperformed the S&P 500 over the past five years, remember: This is a mix of not just large-cap stocks, but also mid-cap stocks, international stocks and U.S. debt, and thus it reflects the combined returns of all those sectors.

When you consider that, and FFNOX’s dirt-cheap 0.11% expense ratio, FFNOX looks extremely attractive as an all-in-one fund.

If you want to retire comfortably, you need big dividends. The steady drumbeat of income is what helps pays the bills and keeps you afloat when you’ve stopped collecting a paycheck.

But if you want to get through retirement without ever touching your nest egg, you need more than just giant dividends – you need dividend growth to beat back inflation, and you need capital appreciation to keep building your nest egg. The “triple threat” stocks in my “8% No Withdrawal” retirement portfolio will deliver exactly that!

How many times have you seen a pundit shill for OK-yielding blue chips like Coca-Cola or Kellogg? They’re not bad companies, but they leave you with just 3% to 4% in dividends, paltry payout hikes and little in the way of growth potential.

You and I both know that math doesn’t add up. Those 3% to 4% returns on a nest egg of half a million dollars will only generate $20,000 in annual income from dividends at the high end!

You’ve worked your tail off for decades. So you deserve more out of your retirement.