With the recent market downturn, you might be worried that stocks are headed for trouble. Don’t be.

Because there’s one really good reason to be greedy now that the market has become fearful again, and it can be summed up in two words: earnings season, which “officially” kicks off when Alcoa (AA) reports its results on July 18.

So far, 2018 has been one of the best years for company earnings in history—and that trend is set to continue.

First, let me tell you why. Then I’ll give you 3 funds you can buy today to lock in the gains that this temporarily depressed market is set to hand us.

Since the start of 2017, corporate profits have been exploding. In just two years, we’ve gone from declining profitability to earnings growing by over 24% in the last quarter—and that momentum is predicted to continue. 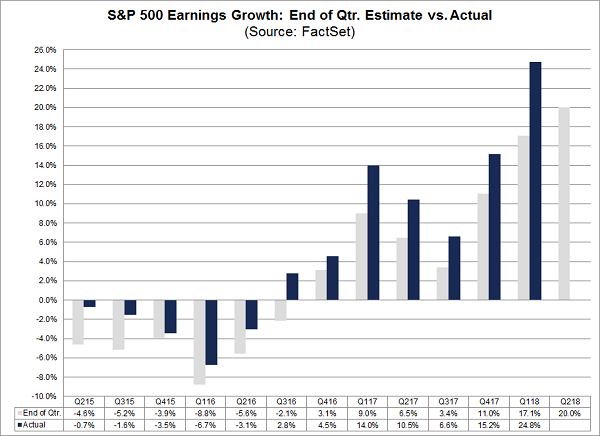 As we slide into the next quarter, earnings are predicted to rise by 20%, higher than last quarter’s 17.1% profit prediction (which was conservative by over 7 percentage points).

What’s driving this higher profitability? That can be answered with two words: domestic demand.

Since S&P 500 profits went positive at the end of 2016, the US dollar index has risen 2%. And during 2017’s consistently high earnings growth, the US dollar continued to appreciate, rising by 10% from the middle of 2016 at its highest point, when profits were up double digits, as well.

Why is this detail important?

Simple—a higher dollar means US exports are less competitive around the world, resulting in declining sales of American goods abroad (something I wrote about last week). And companies not only survived this tough global environment for exports, but thrived.

This may be why last Friday, when the trade war between America and China (and possibly many more countries) became official, with tariffs going into effect between the two powerful nations, the markets shrugged.

Turning instead to the domestic jobs report, which showed 213,000 positions were added and, more importantly, labor participation was increasing, the market realized something crucial: China may have slapped $34 billion in tariffs on American goods, but America’s economy produces $19.4 trillion in goods and services that are consumed at home and abroad.

So while the trade war will hurt, say, American soybean farmers who sell to China, most of the country simply won’t notice.

What investors are noticing, however, is more people shopping, more companies hiring and more capital investment in an expanding economy. And that’s why stocks shrugged off the trade war.

Get in Now—But Get in Wisely

The surprising thing is, you could buy the S&P 500 ETF (SPY) now and get stocks a lot more cheaply than most people believe.

Why? Because most people are looking at the wrong number.

But that’s looking backwards, and stocks are a forward-looking asset class. So we need to think about the S&P 500’s forward P/E ratio, which estimates the index’s price-to-earnings ratio for the next year. And that number is sinking like a rock. 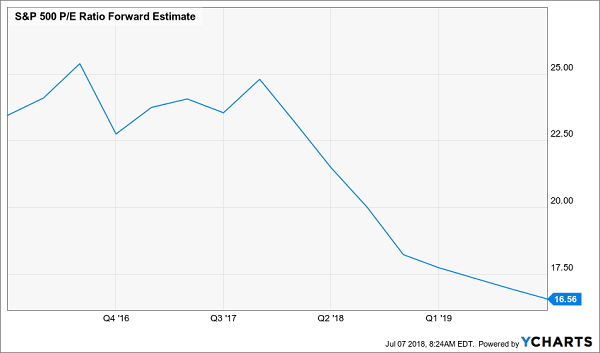 Thanks to soaring profits, the S&P 500 is cheaper than it’s been in three years, after its forward P/E ratio plummeted in the last few months due to earnings growth that’s beating stock-price growth by a mile. Remember, earnings are up 24% from a year ago, but the S&P 500 is up just 14.5% in the past year.

But we can get ourselves a nice double discount by being more creative.

While ETFs like SPY always trade pretty much at their net asset value (NAV, what the holdings in their portfolios are actually worth), we can get exposure to many of the stocks in the index at a bigger discount if we buy closed-end funds (CEFs), which often trade at prices far lower than their NAVs.

And that brings me to the 3 CEFs I want to show you today.

CEF Pick No. 1: Buy Like Buffett for 83 Cents on the Dollar

For instance, we can buy the value investing–focused Boulder Growth & Income Fund (BIF), which invests a quarter of its assets in Berkshire Hathaway (BRK.A, BRK.B.), as well as many other US value stocks that are part of the S&P 500, like JPMorgan Chase & Co. (JPM) and Caterpillar (CAT).

In addition to a nice 4% yield, BIF gives us an exposure to these stocks at a huge 16.5% discount to NAV, making USA one of the 10 most discounted CEFs focusing on US stocks.

And here’s a bonus: that discount has been narrowing at a slow pace for years until recently, giving us a rare opportunity to buy during a window when the market has forgotten how cheap and great BIF is as a fund. 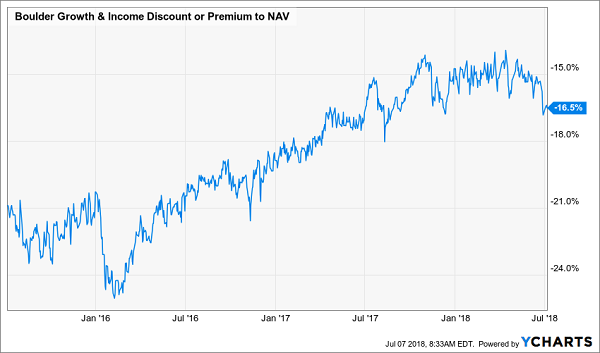 CEF Pick No. 2: A “Surprise” Dividend Most People Overlook

One simple reason: its discount has recently fallen to a year-to-date low, despite the fund’s market price keeping up with the S&P 500 (it’s up 4.1% on a NAV basis, about identical to SPY’s return for 2018). 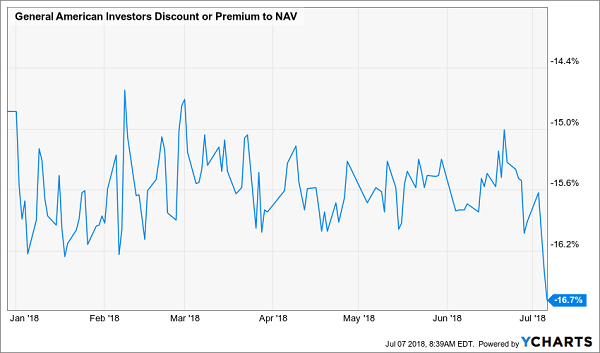 Some people might not like GAM because of its low yield—just 1.4% based on its current distribution. But GAM has a history of sudden and large special distributions after strong performance over a long period. And since GAM is up 22% since its last big payout in November 2016, it may be time for the fund to reward investors with another big payout at the end of this year.

If you can’t wait for big income and want fat dividends right now, the Liberty All-Star Equity Fund (USA) may be worth your attention.

This 10.5%-yielder has a 5.2% discount to NAV, making it less cheap than the other CEFs I’ve mentioned. But it makes up for that with strong performance and a great portfolio.

With Adobe (ADBE), Amazon (AMZN), Visa (V) and Alphabet (GOOG) as the fund’s top holdings, this is an aggressive growth fund with heavy tech exposure—although it also has Kraft-Heinz (KHC) and Halliburton (HAL) as top 10 holdings. This mix has helped USA jump 16.6% in the last year while growing its already huge dividend by 30.8%. 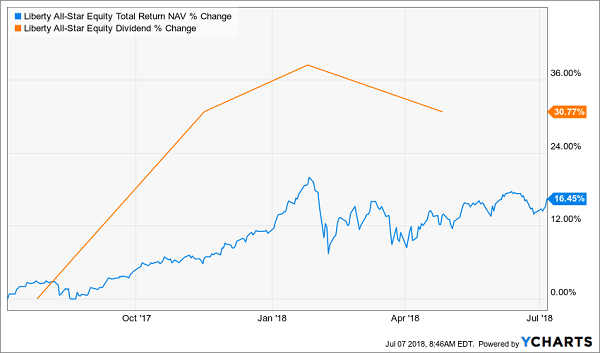 More payout hikes are likely if USA keeps increasing its NAV, as it has done in the last couple of years. That, in turn, would entice more investors in, driving the fund’s market price—and your gains—ever higher.

Yours Free: My Top CEF Buy Now (10% Yields and MASSIVE Gains Ahead!)

If you’re looking to tap into Warren Buffett’s market mastery, this next fund—a “bonus” fourth pick I have for you today—is the fund to do it with.

Before you ask, no, it’s not run by the Oracle of Omaha himself.

But it is run by a hardened Buffett disciple whose stock-picking prowess has been the talk of Wall Street for 30+ years!

He uses the master’s time-tested value-investing strategies to deliver outsized gains when the market is soaring … and slash your volatility when stocks fall out of bed.

That’s why I’ve made this fund—which has been around since 1986—a core recommendation of my “safety first” CEF Insider service.

Check out how it’s outperformed the market since: 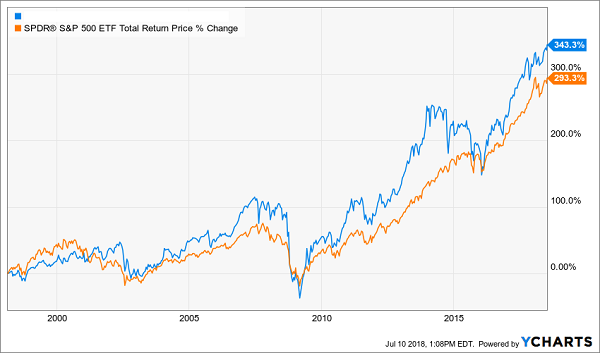 Imagine holding a fund like that, which rides higher like it’s on rails—without keeping you up at night!

Also remember that almost all of this return was in CASH, thanks to my “bonus” fourth pick’s monstrous dividend, which yields an incredible 9.5% today.

This one’s an absolute steal at its current discount to NAV. And I’m ready to give you full details on this life-changing fund, along with those on my other 4 top CEFs to buy now (average yield: 8.2% with 20%+ price upside too) when you CLICK HERE.