4 Big Dividends Slashed: What To Do Next

Your favorite dividend stock just chopped its payout – should you sell?

It depends. Believe it or not, some dividend cuts are actually wildly bullish signals. They mark the bad news being officially “priced in” as shares soon embark on a furious contrarian rally.

Other payout cuts, however, are red flags begging you to sell before you lose even more money. They are truly a white flag of financial distress that shows the firm failed at its sole responsibility to shareholders – to get the dividend paid.

We’ll discuss post-cut strategies in a moment, including specifics on recent dividend disappointments from the likes of American Capital Agency Corp (AGNC), Potash (POT), Williams Cos (WMB) and the iShares US Preferred Stock ETF (PFF). Should they be sold now, or held in hopes of a relief rally?

First, let’s review the situation in which you should always sell.

Ditch Any and All Dividends in Danger

The market tends to sniff out weak payouts before they are officially slashed. Kinder Morgan (KMI) infamously announced that it would cut its big dividend in December. And that marked the bottom for the stock price – it had sold off by 66% in the preceding six months. Then it rallied by 63%!

Kinder Recoups Half Its Losses Post-Cut 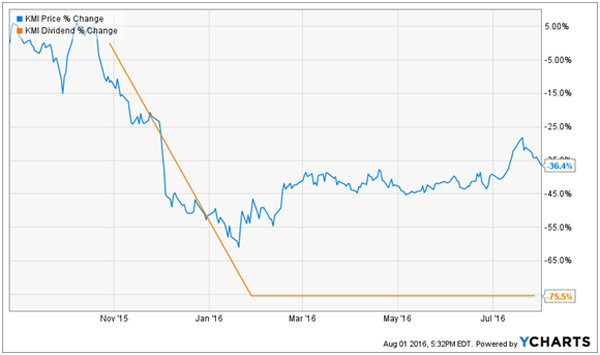 Business development companies (BDCs), like MLPs, are notorious for high – and somewhat fragile – yields. They are required by law to pay out most of their profits as dividends, which leaves them with little margin for error when earnings disappoint.

BDC Triangle Capital (TCAP) cut its big double-digit payout in May – and its stock was predictably crushed by 17% the next trading day. Then, a funny thing happened – investors realized that TCAP still boasted a big yield and decided the company was unlikely to slash its payout again for at least a few quarters. So they bought the stock back – investors who held on regained nearly all of their initial losses: 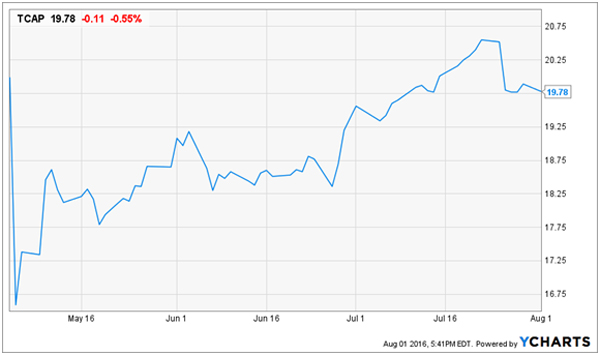 As a quick aside, if you’re not sure how secure your company’s dividend is, a quick and easy reference is the DIVCON rating system put together by my friends at Reality Shares Advisors. It’s a free resource (one we’ve reviewed previously) that ranks dividend safety.

Now in most cases, selling ahead of a dividend cut will save you from double-digit losses. But what if the slash caught you off guard and you’re left holding the stock – is there hope for a rally as we’ve seen with Kinder and TCAP? Let’s review the latest major payout cuts.

I warned you in May that American Capital Agency Corp (AGNC) was due for another dividend cut. Last week it happened as management announced a 10% cut.

The stock still pays an 11% forward yield, which has helped support its price in wake of the slash. But this is the company’s second payout cut in two years, and while the stock always seems to boast a 10%+ yield, it just hasn’t been making investors any money lately. Its total return including dividends since the start of 2015 is just 7.7%: 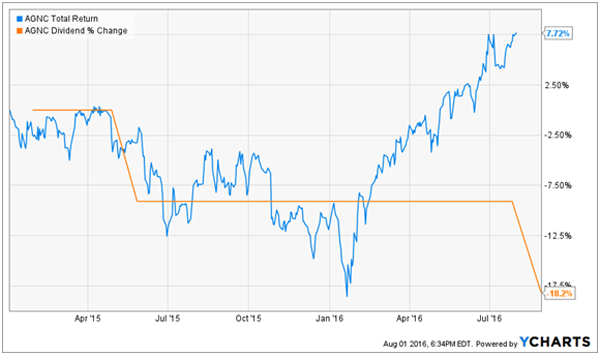 (A serial dividend chopper? No thanks – I’ll take the dividend growers that actually do return 10% annually instead.)

Fertilizer maker Potash (POT) has excelled at grinding through shareholders’ capital lately, too. It just cut its dividend for the second time this year, and shares are down 11% year-to-date.

Potash’s profits ebb and flow with agricultural commodities, especially corn and soybean prices. You should never buy this stock as an income play. But it can be an effective way to speculate on higher ag prices, and with corn prices at 10-year lows and soybean prices at the low-end of their decade-long range, this stock has some upside potential.

Which begs the question for WMB investors – why not just invest in WPZ yourself, too? After all, it’s never cut its dividend – and has doubled up WMB’s performance as a result:

The Benefits of Dividend Growth vs. Cuts 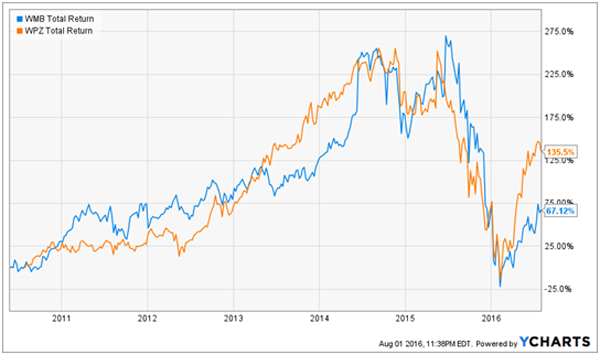 Finally the iShares US Preferred Stock ETF (PFF) and its headline 5.6% yield attracts a lot of amateur investors with little understanding of preferred shares – let alone how this fund invests in them.

Corporations issue preferred shares to raise capital. These issues generally pay dividends that receive priority over those paid on common shares. They are also usually higher than dividends on common shares, though the trade-off is that preferreds have less price upside.

PFF pays a monthly dividend and its distributions are all over the map, so the recent cut is par for the course. The more pressing issue is: Should you entrust the selection of preferred shares to a mere formula?

No. Not only does the ETF-model leave some alpha on the table in this case but it also exposes investors to unnecessary credit risk. The only way you lose with this vehicle is by giving your money to a driver who crashes your car. But the S&P 500 and NASDAQ are large enough that there’s usually a company financially crashing into a brick wall at any moment in time. Such as 2008, when PFF shed two-thirds of its value.

That’s why I recommend moving past a broad-based ETF in favor of a closed-end fund. You’ll have an active manager working for you, and if you buy at opportune times, you can actually purchase your shares at a sizeable discount to the underlying Net Asset Value (NAV).

Don’t mess around with these dividend cutters. Why bother with the headaches and inferior long-term performance when you can lock in secure yields with some likely upside to boot!

My favorite income plays today are closed-end funds that pay 8.0%, 8.4% and even 11% dividends. Plus, they trade at 10-15% discounts to their net asset value (NAV) today. Which means they’re perfect for your retirement portfolio because your downside risk is minimal. And they earn market-beating returns over time, too.

Even if the market takes a tumble, these top-notch funds will simply trade flat … and we’ll still collect those fat 8% to 11% yields.

It’s only a matter of time before other investors ditch their dividend disasters and paltry payers and find their way over to these “slam dunk” income plays, so the time to buy is now, while they still trade at deep discounts to NAV.