Better Than Cash: 5 Recession-Proof Payouts Up To 10.3%

With stocks are at nosebleed levels, how about some high income issues that double as portfolio insurance? Today we’re going to discuss five dividend payers with an average payout north of 5%. All five boast recession-proof businesses.

Of course there are plenty of things to worry about in today’s financial world. Income inequality is high, restaurant sales are plummeting, and few people seem confident in America’s increasingly contentious political quagmire. Then of course there’s the slowdown in China, growing political unrest around the world, exploding student loan debt in America and rising subprime defaults in the auto loan sector. This was all reflected in Friday’s disappointing GDP results for the second quarter.

Could we be sliding into a recession?

If we are, it’s time to protect your portfolio. Fortunately there is a class of assets that is both recession proof and high yielding. You can buy these stocks today, collect 5% dividends and insulate yourself from a downturn.

Legally Required to be “Dividend Machines”

Real estate investment trusts, or REITs, can be powerful investment vehicles for safety and high yield. Legally required to return 90% of income to shareholders, these firms employ the expertise of management to find high-quality real estate opportunities while providing investors with the liquidity of a stock. Many REITs yield over 5% and some even pay monthly. They are particularly attractive for anyone looking to get a steady income stream right now – one that will withstand any economic turbulence.

Many REITs are counter-cyclical. While REITs that specialize in strip malls or hotels suffer if a recession hits, others such as healthcare REITs do not see a sudden collapse in demand when the economy tanks. Sector staple Ventas (VTR) pays 3.9% today, and some quality issues actually pay 7% or 8% or better (more on these later).

Meanwhile self-storage REITs sometimes can see an uptick in demand when economic trouble strikes. For example, in 2008 when millions of Americans were losing their homes, demand for self storage went up as people abandoned their underwater houses and looked for a place to keep their valuable possessions as they were forced to downsize into smaller properties. Public Storage (PSA) is the best known firm in the space – it pays 3%.

Likewise, demand for apartments can also go up in a bad economy, as Americans are forced out of their homes and seeking cheaper alternatives. Camden Property Trust (CPT) invests in apartments that should do well in good times and bad – its stock yields 3.5% today.

Finally infrastructure REITs also do well in downturns. Infrastructure growth often gets a boost when governments spend to kickstart the economy. The Keynsian idea is that when the private sector is tanking, the public sector needs to step in and make up for that decline in demand. If they fail to do so, the decline in demand will become a death spiral that results in an ever-declining fall in the economy. Aggressive government spending in times of crisis often means investments in infrastructure, and REITs are well positioned to benefit from that. And there are two infrastructure REITs paying big dividends today. Thanks to the pullback in energy, CorEnergy (CORR) and InfraREIT (HIFR) pay 10.3% and 5.7%.

Our Countercyclical REIT Portfolio Pays Over 5%

This portfolio of five REITs that will insulate us from a downturn and pay us an average yield above 5% today:

And our dividend stream isn’t static either. These firms have a history of boosting their payouts regularly: 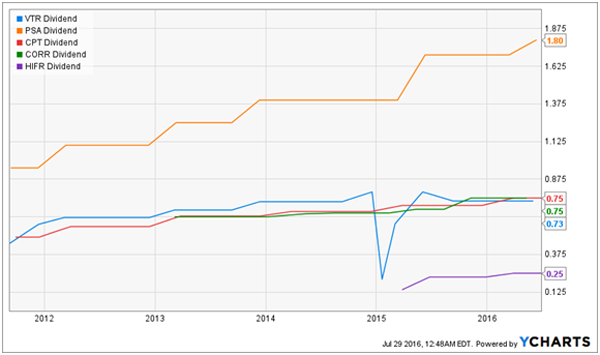 CORR has nearly doubled in 2016 but its stock remains below 2011-2014 levels. What caused such a massive drop in the stock last year? Simply put: energy exposure. CorEnergy saw two major tenants go bankrupt, which is why 2015’s funds from operation were just 79 cents, versus a $3.00 dividend payout. That caused widespread panic, and a massive sell-off. 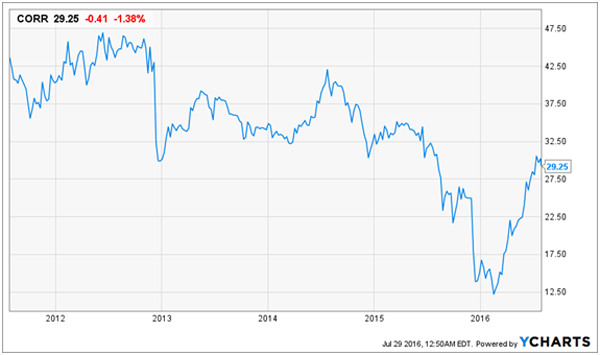 But things are turning around for CorEnergy. Revenues jumped 59% year-over-year in the first quarter of 2016, and FFO rose to $1.07 for the quarter. Annualized, CORR will have a 143% dividend coverage ratio, significantly higher than most REITs. And with a debt-to-equity ratio of 0.5–again far below many competing REITs–it seems the company should have no problem paying its debts and continuing dividend payouts, especially as the energy markets crawl back from the worst of the last couple years.

My Favorite Stocks for Good Times and Bad

Whenever there is a major market downturn, cash is king. Liquidity becomes crucial, and dividends become more important than ever. This is partly why the U.S. Treasury goes up in times of crisis, and growth stocks crater.

But you can’t just sit in cash for years on end – otherwise your portfolio will get chipped away by inflation and you’ll never generate any income from your capital.

Of the five stocks we discussed, I like the healthcare space the best. Favorable demographics are going to boost REITs that focus on nursing homes and hospitals for decades to come.

Unfortunately Ventas only pays 3.9% today. But three smaller firms in its space boast dividends that are 50% higher. They aren’t as well known as Ventas, and thanks to their relative obscurity, their stocks are cheaper

Plus, these firms are raising their dividends every year – even faster than Ventas – and in one case, every single quarter. Which means, in just a few years, you’ll be earning a growing 10% yield on your initial investment.

The best time to buy these stocks is right now, before Wall Street uncovers these hidden gems and sends analysts their way. Click here, and I’ll give you the name and ticker for each one, along with my full analysis of each pick.