These 4 Dividend Darlings Could Drop 20%

I know I don’t have to tell you it’s a minefield out there for income investors.

Ten-year Treasuries yield a pathetic 1.5%, and dividend-growth stocks have been on a tear. The ProShares S&P 500 Dividend Aristocrats ETF (NOBL), which holds shares of companies that have hiked their payouts annually for 25 years or more, has soared 12% year-to-date, more than doubling the S&P 500’s gain: 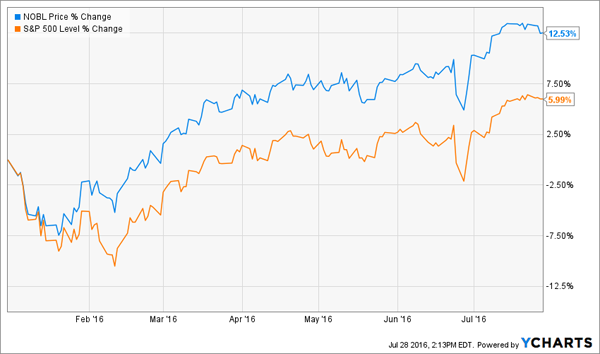 That’s left many Dividend Aristocrats overvalued and ripe for a fall. Worse, it’s driven their dividend yields to historic lows.

Just take a look at food distributor Sysco (SYY), which yields 2.4% today, barely above the S&P 500 average and near lows not seen in nine years: 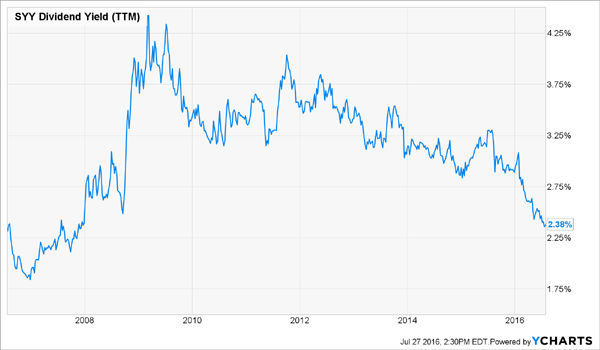 To get that meager yield, investors are buying a stock with a trailing-twelve-month price-to-earnings (P/E) ratio of 37, way above its five-year average of 23! So if Sysco’s P/E ratio were to simply revert to its five-year average (a not-unrealistic scenario), you’d take a 38% haircut from today’s level.

For that kind of risk, you’d expect to at least get superb dividend growth … but not with Sysco, which has been raising its quarterly payout by only $0.01 a year—just enough to hold onto its Dividend Aristocrat status.

That situation isn’t going to get better anytime soon—and it could get worse—as Sysco’s earnings per share (EPS) have fallen sharply over the past five years, driving the payout ratio (or the percentage of earnings paid out as dividends) up to a sky-high 87%. 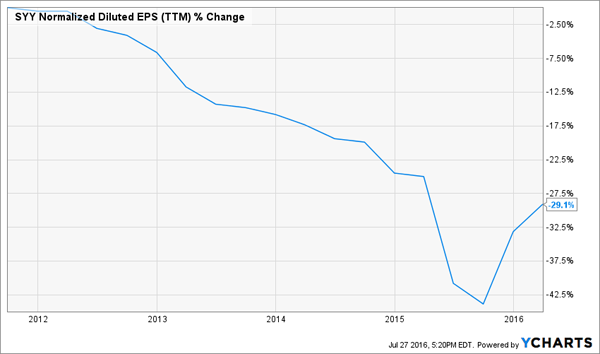 Here are 3 more overpriced dividend-payers setting up for hard falls in the next few months. If you hold them, I recommend selling right away. (And if you’d like to read about 7 bargain stocks growing their payouts at double-digit rates, click here.)

McDonald’s (MCD): Many people invest in the fast-food chain for its steady dividend growth, and it’s easy to see why: since 2008, the Golden Arches’ quarterly payout has risen 137%—or a meaty 17% annualized.

Too bad they’re looking in the rearview, as a big chunk of that growth came from two hikes—33% in 2008 and 15% in 2011. Lately, payout increases have been much leaner, with the last hike, announced last summer, coming in at 4.8%.

As I warned you in late December, the company’s rising payout ratio (now at 66%), means it will have to come up with something tastier than all-day breakfast to again reward investors with serious payout hikes. That’s a tall order for a chain that’s been consistently behind the curve on the healthy eating trend. 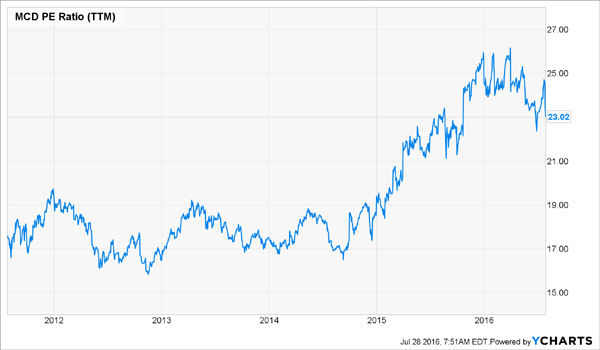 Meantime, this is one overcooked stock: even though it’s down 6% since reporting disappointing first-quarter U.S. same-store sales growth on July 25, it still sports a P/E ratio of 23.0, rarefied territory for a 3%-yielder with slowing payout growth.

A retreat to the stock’s five-year average of 19.4 implies a 16% drop from here—and I see it heading lower than that.

General Mills (GIS) isn’t the kind of company investors expect to give them a nasty surprise. After all, people need to eat, right? And the packaged-food maker is known for its legendary stability.

This is precisely why investors, terrified by Brexit and other recent market panics, have sent the shares up 22% year-to-date, lifting GIS’s P/E ratio to 25.7. That’s well above the five-year average of 19.9, a reversion to which would bring the price down to around $55, erasing essentially all of GIS’s gains this year.

Another red flag? Buying now gets you a 2.6% trailing-twelve-month dividend yield—a six-year low, thanks to the spike in GIS’s share price. That doesn’t give yield-hungry investors much incentive to bid the stock higher.

Worse, the company is on the wrong side of a major trend: a growing preference for fresh food, a shift it’s trying to counter by slashing costs.

In the quarter ended May 29, sales declined 9%, to $3.9 billion, and adjusted earnings per share (EPS) fell 12%, to $0.66. Both numbers beat expectations, but if General Mills can’t find a way to tempt consumers with fresher fare, its payout increases will shrivel—and investors will sell in favor of stronger dividend-growth stocks. 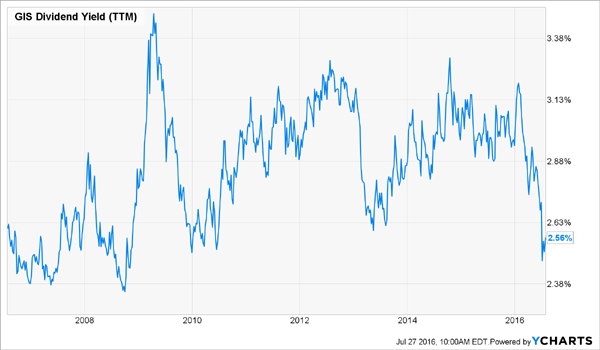 Wal-Mart Stores (WMT) has nearly tripled its dividend in the last decade—but it’s done so by nearly doubling its payout ratio, and while that figure is just 44% now, it’s still headed in the wrong direction.

That means there’s a limit to how much more the company can hike, especially with earnings heading south: 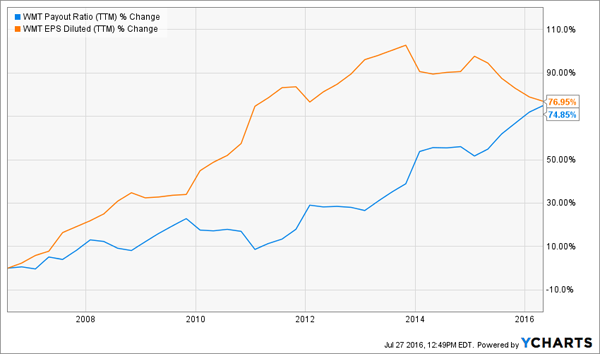 Of course, the fundamentals haven’t stopped spooked investors from driving Wal-Mart shares up 20% year-to-date. But I don’t expect it to hold these gains for long.

Why? For one, WMT has neither a high dividend yield (2.7%) nor a compelling dividend-growth story to put in the window: like Sysco, it’s been hiking its quarterly payout by only $0.01 annually in the last few years.

Its P/E ratio of 16.1 is now above its five-year average of 14.7, so the stock would shed 9% of its value just by reverting to its historical norm. And that could be just the start.

To account for the fear trade that’s fueled WMT’s rally this year, I think a P/E ratio of 13.1—where the stock was valued in early January—is a better baseline. If it retests that level (as I expect it will) it would be worth 19% less than it is now.

Triple Your Income Instantly With These 3 Dividend Champions

Why mess around with these over-hyped dividend misers when you can grab yields of 8.0%, 8.4% and even 11% right now … and at a bargain, to boot.

They come from an underappreciated type of investment called closed-end funds—and my 3 favorite ones are cheap today, trading at a 7% to 15% discount to net asset value.

So unlike our four maxed-out dividend payers above, you can bank on a nice rise in the share price as yield-starved investors climb aboard.

With interest rates going nowhere and most dividend growers looking pricey, now is the perfect time to see if these unsung investments a good fit for your portfolio. Simply go here now to get all the details and the names of my 3 favorite high-yielding closed-end funds.