There are a growing number of stocks and funds yielding over 12%, luring in unsuspecting investors. Earning $12 in income for every $100 invested sounds great – unfortunately, it’s often too good to be true.

Generally, stocks have outsized yields when the market thinks that their income source is threatened. When that happens, a dividend cut ensues, turning the big dividend into a tiny one.

For example, ConocoPhillips (COP) was a blue chip with decades of dividend growth behind it and a handsome 4% dividend yield for much of the last five years. As energy prices declined along with Conoco’s stock price, its yield skyrocketed… until it slashed its dividend by over 66% at the beginning of this year. Now it pays a meager 2.4%.

Worse yet for investors, the market was somehow surprised by the dividend cut – shares plummeted by 40% in the months following the announcement.

How could you have foreseen the cut? By watching Conoco’s free cash flow (FCF). Due to tanking oil prices, the company began hemorrhaging billions of dollars in early 2015: 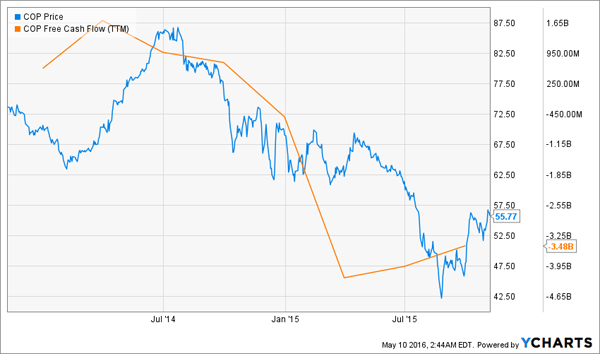 An investor looking at free cash flow knew to avoid COP when it was trading at $62.50, months before it fell to $45.40 in August or its current $41.66. Long before the company finally cut its dividend.

There are more yield traps waiting in the market today. Master limited partnership (MLP) Energy Transfer Partners (ETP) is a favorite some retail investors thanks to its 12.1% yield. Anyone long ETP is probably feeling good about the 3% capital gains the stock has delivered as a result of a temporary rebound in oil (although the stock and oil remain down significantly over a one-year horizon). It won’t last, as the company’s distributable cash flow continues to fall due to weaker net income. That is also dragging down the MLP’s FCF chart: 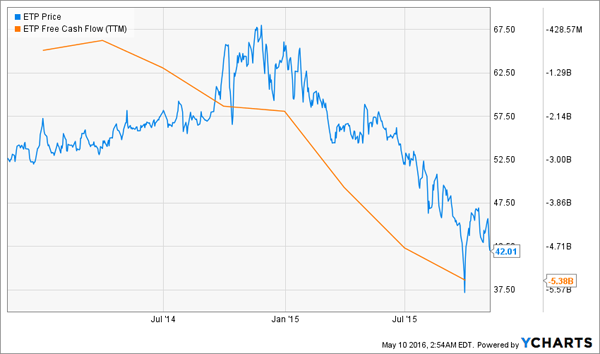 In ETP’s last quarterly report, it reported only $0.83 per share in distributable cash flow (DCF) – well short of its actual $1.055 distribution.

There are yield traps outside of energy, too. American Capital Agency Corporation (AGNC) works in the securitized mortgage space by borrowing money cheaply and lending it out at higher rates. Sounds simple enough—it’s the way banks work, after all—but the business is much more complicated than that, since it involves juggling debts whose interest payments change on a constant basis. Some companies in this space—known as mortgage real estate investment trusts, or mREITs—do a better job at this than others, and AGNC cannot be called a top performer. Still, a 12.7% dividend yield catches the eyes of many.

It shouldn’t. Again, looking at the company’s financial metrics and price performance shows how the market predicted troubles long ago. Over the last five years, the company’s dividend has been covered less and less from its income–causing the company to cut its dividend all the time – and its stock price follows:

AGNC Cuts Its Payouts All The Time 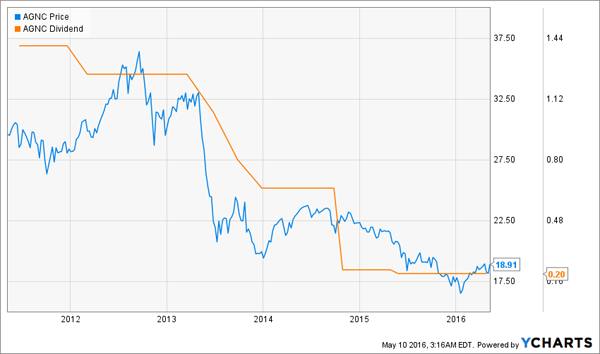 But now some people are buying thinking this almost-yearly tradition won’t repeat itself and this money-losing mREIT won’t cut its distributions yet again. I wouldn’t bet on it.

A company doesn’t need to be losing money to be a yield trap. Prospect Capital (PSEC) is a business development corporation that funds middle market companies largely through debt, and its juicy 13.5% yield has made it a cult favorite among holders. But there are a few problems with the stock. It’s down 38.3% over the last 5 years and down 8.7% over the last year. The stock cut its dividend a year ago, and its net investment income (NII) over the last year covers dividends by just 3%.

Even more distressing, the company’s net asset value fell 5.1% from last quarter and 6.8% from a year ago. But the fees management is charging have gone up from $198 million in the 2014 fiscal year to $225 million in the 2015 fiscal year—a jump of 13.6%. Such a misalignment between management compensation and performance is a huge alarm bell that savvy investors heard long ago—but it’s hidden well by management, buried in a 10-K most people won’t read.

One brand name to avoid is Pimco’s High Income Fund (PHK). Paying 13% and booking 16.5% capital gains year-to-date, this looks like a dream come true. However, a look under the hood is not pretty. At $9.50, this bond fund is currently trading at a 47% premium to its net asset value (NAV), so for every $1 of bonds that PHK holds, buyers are paying $1.47. That’s an easy way to lose $0.47 on every $1 you invest! You should never pay a premium for a closed-end fund like PHK.

Conclusion
When it comes to high yield, you can get burned if you try to reach for the stars. That doesn’t mean you need to give up on high income now, even if it means settling for less than 12%. Instead, there is a strategy to get dividends over 8%—and as high as 11%—with capital gains upside that is much more reliable than falling for yield traps. It involves buying a class of funds that billionaire “Bond God” Jeffrey Gundlach loves so much—but are generally unknown to the rest of us. If you want to learn what these funds are, click here to read more and I’ll give you the details, along with the names and tickers of my three favorites.