Plenty of investors judge a stock’s dividend by one thing: the current yield. It’s a key figure, to be sure, but it’s just a starting point. If you’re investing for the long haul, dividend growth is way more important.

To see how focusing solely on current yield distorts the payout picture, take a look at Microsoft Corp. (MSFT). The stock currently boasts a 2.6% dividend yield, just above the S&P 500 average of 2.2%.

That’s not bad, but it masks the 125% boost in the company’s dividend over the past five years: if you’d bought MSFT back then, when the stock was trading around $25.70—roughly half of today’s level—you’d already be banking a 5.6% yield on your initial buy.

Before you ask, no, I don’t recommend buying Microsoft now, despite its glowing dividend history. That’s because the software giant’s payout hikes could be a lot smaller in the next five years than they were in the last five.

Why? For one, its payout ratio has broken over 100%, which means it’s paid out more in dividends in the last 12 months than it’s earned—never a good sign for future increases. 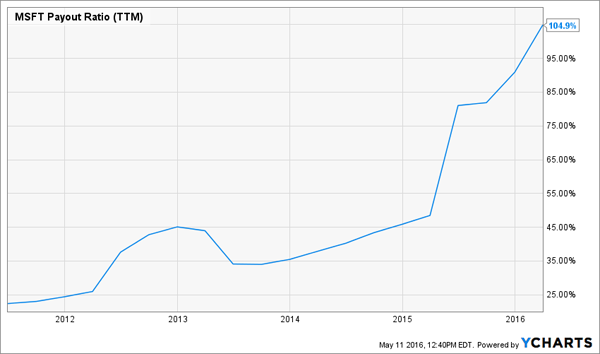 And two, the profits backstopping those payouts flat-lined in the first quarter as the terminally ill PC market dragged down Windows 10 sales, offsetting Microsoft’s growth in mobile and the cloud.

Luckily, the three stocks below face no such roadblocks. Not only do they have the low payout ratios and rising earnings they need to double their payouts in the next five years, they’re trading at bargain valuations, to boot.

The stock’s 1.9% dividend yield is equally unexciting, but the company is the fastest dividend grower of my three picks, nearly tripling its payout in the past five years. 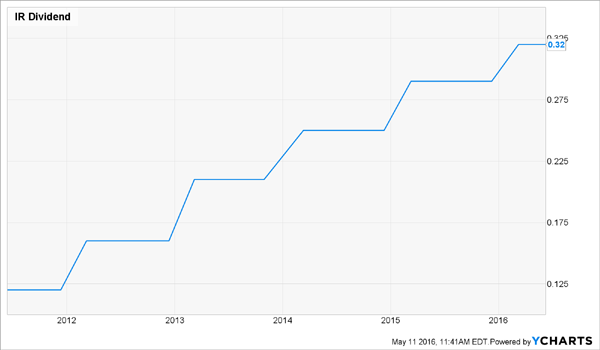 Manufacturing is a volatile business, but 76% of Ingersoll-Rand’s revenue comes from heating and air conditioning, a market that’s forecast to grow at a 9% compound annual rate in the next five years as the need for ever-more-efficient gear drives demand higher.

Wall Street sees IR’s earnings per share paralleling that rise, gaining 9.1% this year and another 9.8% in 2017. That, plus the company’s low payout ratio—just 43% of its last 12 months of earnings—makes another big dividend hike next February (Ingersoll-Rand boosted its payout by 10% last February) a lock.

The stock has gained 19% this year, as investors have come to see Ingersoll-Rand as more than just another cyclical industrial stock, but its forward P/E ratio still clocks in at 16.2, a nice discount to its industry (18.2).

If the latest rumors about the Apple (AAPL) Car are right, you can expect to hear a lot more about Canadian auto-parts supplier Magna International (MGA) in the next five years: it’s reportedly in talks with the tech giant about building its mysterious new ride.

The rumors highlight Magna’s ability to assemble whole vehicles under contract, a rarity in the components business and a big draw for tech giants, like Apple and Alphabet (GOOGL), looking to sell their own electric- and self-driving cars.

Meantime, the boom in U.S. auto sales still has lots of room to run, thanks to cheap fuel, continued low interest rates and America’s geriatric vehicle fleet, which is around 11.4 years old, on average.

Magna, which yields 2.5% today, has doubled its dividend in the last five years, so if you’d bought back then, you’d already be yielding a tidy 3.9% on your original buy. A repeat performance looks likely, thanks to Magna’s ultra-low 18% payout ratio, which gives it plenty of room to maneuver, even if car sales downshift.

And if Tim Cook does sign on, it would light a fire under Magna’s stock, which is already one of the best deals on the lot at just 7.7 times forward earnings.

A Prescription for Dividend Growth

AbbVie Inc. (ABBV) has only been around since 2013, when it was spun off from Abbott Laboratories (ABT), but it’s hiked its payout by 42% in that time. It also boasts the highest yield of my five picks, at 3.6%, so you’re already off to a running start on the payout front.

Buying drug stocks is all about the pipeline, and AbbVie just snagged a potential hit through its $5.8-billion deal for Stemcentrx, which is developing a treatment for small cell lung cancer (SCLC) called Rova T.

There are about 224,000 lung-cancer cases diagnosed in the U.S. every year, and SCLC accounts for 15% of those. There aren’t many other treatments, which is why AbbVie pegs Rova T’s potential sales at $5 billion a year if it makes it through the testing phase. That represents about 22% of the company’s annual revenue of $23 billion.

Of course, an experimental drug can fail at any point, but no matter what happens, AbbVie will remain a free cash flow machine. In the first quarter, it generated $1.24 a share in FCF, easily covering its $0.57 dividend. The stock also trades at just 12.5 times forward earnings.

These Ignored Investments Can Double Your Income Overnight

AbbVie, Magna and Ingersoll-Rand are all great buys now, but even if they double their payouts in the next five years, the yield on your original buy still won’t be anywhere near what my three favorite high-yield investments pay right now.

These hidden gems throw off 8.0%, 8.4% and even 11% yields today. And your downside risk is minimal: even if the market takes a tumble, these top-notch dividend plays will simply trade flat … and we’ll still collect those fat 8% to 11% yields.

I’m not the only one pounding the table on them. So is Jeffrey Gundlach, one of the top fund managers on the planet.

He’s been dubbed the “Bond God” for his 20-year track record and the extraordinary performance of DoubleLine, the $85-billion asset-management firm he co-founded in 2009. Right now, Gundlach’s calling these rock-solid yield plays a “slam dunk” and a “no-brainer”—and I agree 100%.

Even better, my top three picks are trading at discounts of 7% to 15%, so double-digit gains will practically fall into your lap as mainstream investors catch on to what they’ve been missing.

Click here to get the full story and the names of these three rock-solid income picks now.