Buy These 3 Stocks Before Their Dividends Double

Study after study has shown that stocks that pay dividends—and grow them every year—are the best way to beat the market. These payouts also give you “bear insurance” because they can tide you over when your investments hit a rough patch.

But just looking for companies that hike their dividends annually isn’t enough. You need strong dividend growth, too. So you’ll want to avoid stocks like AT&T (T), which has raised its quarterly dividend just $0.01 a year since 2008. Big deal!

With that in mind, I’d like to share three “anti-AT&Ts” my research has recently uncovered—undervalued gems poised to double their payouts in the next five years.

I’ve also got a bonus fourth pick for you that will deliver even faster dividend growth thanks to an exploding megatrend. But first, let me share the stringent criteria my first three picks meet:

Of course, these companies also pass my own “second-level” analysis for their actual business prospects, making them the best of the best. All three have big gains ahead, and doubled dividends by 2021 are nearly certain. Same goes for that fourth pick I mentioned earlier.

Shares of Ford (F) have been stuck in neutral for years, but management’s been working extra shifts to give them a new shine. Analysts think those efforts are about to pay off, and I agree: the average 12-month target price on the stock is $15.56, implying 16% upside from here.

The company continues to benefit from an economic recovery in the US, low interest rates and cheap gas—all trends I see continuing. What’s more, its troubled European division finally swung to a profit last year, and preliminary first-quarter numbers show an 8.4% sales jump on the continent.

Meantime, Ford’s a shareholder-reward machine: in the last five years, it’s hiked its quarterly payout by 200% and rolled out a $0.25 special dividend in January. The shares yield 4.5%—near post-recession highs—and there’s plenty of room for more hikes, thanks to Ford’s low 32% payout ratio. 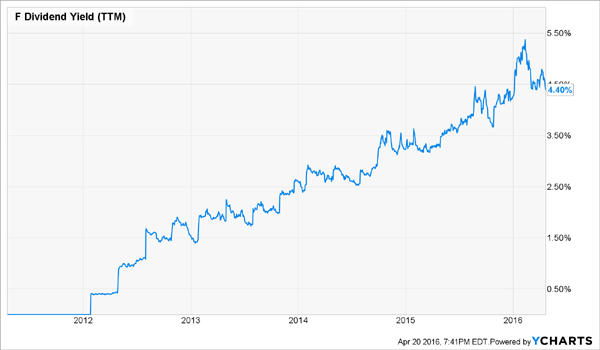 The topper? The stock’s trailing-twelve-month P/E ratio is just 7.4—a multiple you’d expect from a dying company. The time to buy is now, before Ford reports earnings on April 28.

A Dividend Doubler You Can Bank On

Morgan Stanley (MS) yields 2.2% and sports a payout ratio even lower than Ford’s: just 24%. That’s a key reason why you can expect its dividend to double by 2021, after the bank tripled it in the past three years alone.

Morgan trades at just 12.0 times earnings, just over half its five-year average, and 79% of book value. But even if profits remain weak in Q2, analysts see growth kicking in beyond that, driving a further rise in the dividend—and the share price.

A Dividend Champ With a Buyback Tailwind

Wyndham Worldwide (WYN) boasts a P/E ratio of 15.1. Aside from the market selloff in January, the hotel operator’s stock hasn’t been at that level since January 2012. And investors who bought then have checked in for a 105% gain in price terms, along with a dividend that’s more than doubled.

Could history repeat? All the pieces are in place: the payout ratio is just 33%; earnings and revenue have been climbing steadily for five years; and the company’s forecasting adjusted EPS of $5.46 to $5.60 in 2016, up from $5.14 last year. Wyndham’s supporting that EPS growth with share buybacks, which have slashed its share count by 32% in the past five years. 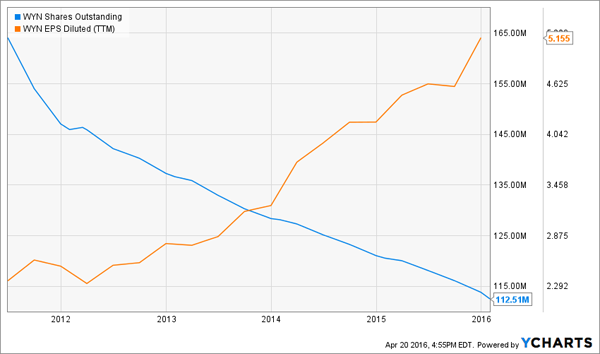 The company does face fierce competition from other hotel chains like Marriott International (MAR) and home-sharing services like Airbnb, but tourism spending is soaring as more people in developing nations hop on a plane, so there’s plenty of business to go around.

My favorite dividend grower yields a sky-high 6.8% and this dynamic outfit raises its dividend every quarter, so you only have to wait three months for the next hike.

And just like Ford, Morgan Stanley and Wyndham, the shares are cheap right now, trading at just 10 times cash flow.

What’s driving that growth? A trend that plunging oil prices, a Chinese economic meltdown or even a President Trump couldn’t change: the graying of America.

This company provides direct nursing care to older Americans—and their numbers are exploding, with the 65+ population set to double and the 85+ population poised to triple in the years ahead.

This well-run company is in the “sweet spot” and it’s growing its already-big 6.8% dividend literally every 3 months. Plus, thanks to its bargain valuation, the stock has easy 20% upside from here, or better.

Go right here to get this company’s name and ticker, plus two more stocks that are capitalizing on the biggest demographic shift in US history.