I’m talking about the flight to dividend-paying—and dividend-growing—stocks in the past eight years.

It’s easy to see what triggered it: US Treasuries don’t offer pay enough to cover inflation, and despite President-Elect Trump’s inflationary policies—more on those below—that won’t change anytime soon.

That’s prompted income-starved investors to pile into higher-yielding options, like municipal bonds, utility stocks, corporate bonds and dividend-growth stocks. These are all good choices, of course.

But here’s where the death spiral comes in: the rush into these investments has dragged down their dividend yields (because you calculate yield by dividing the annual dividend by the current share price), sending investors into even riskier areas of the market.

The pain is obvious in dividend-growth stocks. Yields have plunged to less than 2% on many of the most popular ones, while their price-to-earnings (P/E) ratios have soared. That’s because these companies’ stock prices are racing ahead of their earnings, which have been hobbled by the slow global economy.

As those stock prices continue to race ahead, the risk gets higher—and the size of a potential drop gets bigger when they eventually correct.

The trigger could be a surprise dividend cut, or even slowing payout growth.

In fact, the latter is already happening.

According to S&P Dow Jones Indices, US companies collectively increased their dividends by $6.0 billion in the third quarter.

Sounds great, right? Too bad that number has plunged from the $7.3 billion in hikes announced in the second quarter—not to mention the $10.0 billion of increases rolled out in the third quarter of 2015.

Here are four dividend growers I see as particularly risky now. You should steer well clear of them—or sell them if you hold them.

Bank of America (BAC) is yielding 1.1% these days, which is better than the sub-1% it’s offered over the past few years. Of course, it’s also much worse than the 5.0% and above you would have pocketed before the 2007–09 financial crisis.

It’s true that financial firms are in a better position than they’ve been in a while, both because of Donald Trump’s inflationary policies (think infrastructure spending and trade protectionism) and a looming rate hike from the Federal Reserve. That will widen banks’ operating margins, because they’ll generate more interest income on their loans. But that doesn’t mean now is a good time to buy BAC.

Trump’s Policies: All Priced In 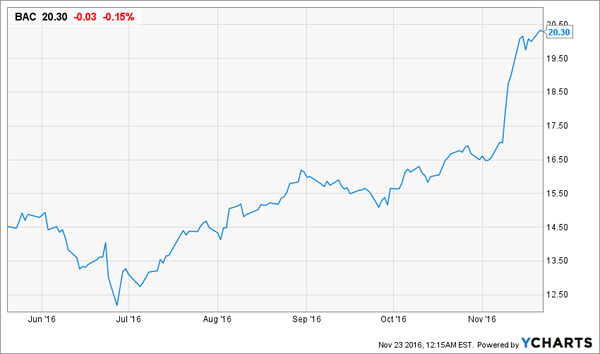 Clearly, investors are aware of all of this and have priced it into the bank’s stock. But the real question is whether BAC can keep growing its dividend. I’ll give you the answer in one chart: 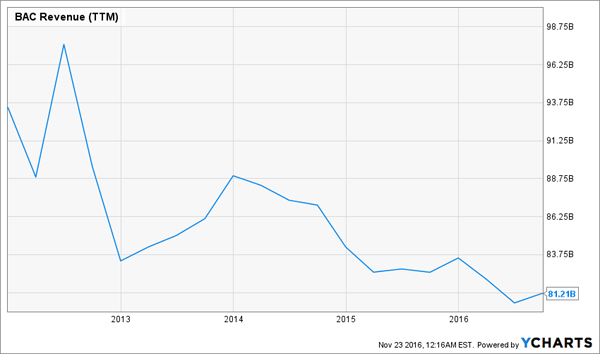 Bank of America is losing market share, and its revenues are declining. And I know I don’t have to tell you that falling revenue will eventually translate into falling earnings—and slowing dividend growth.

The same problem plagues Citigroup (C), which is yielding a pathetic 0.8% right now, far from the 4.0% you would have pocketed before the 2007–09 meltdown. And if you bought today, it would take many years for Citi to grow its payout enough for you to reach a 4.0% yield on your investment.

Will Citigroup be around for decades?

The bank took a different approach to growth than its big US cousins. Instead of trying to expand domestically, in things like corporate credit, mortgages and investment banking, Citigroup headed overseas, betting on a big Asian expansion. Has it worked? 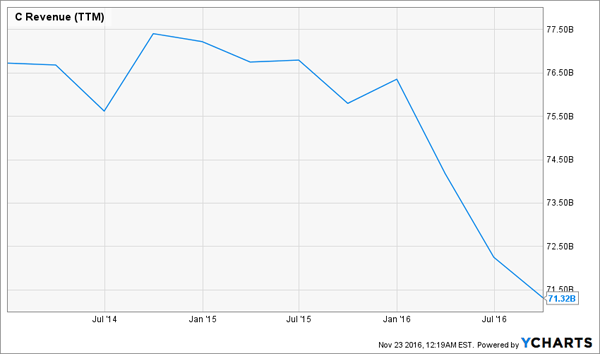 Like BAC, Citigroup’s revenue is sliding, which will pressure the bank’s dividend if it can’t widen margins at its current operations. Citigroup can likely do that in the short term, but with the slow global economy—which would only get slower if protectionism spreads—the bank will find it tough keep it up in the long run.. This low dividend is likely to stay low for a long time to come, making BAC a particularly bad bet after the stock’s recent runup:

The Trump Bump: Already in the Bank 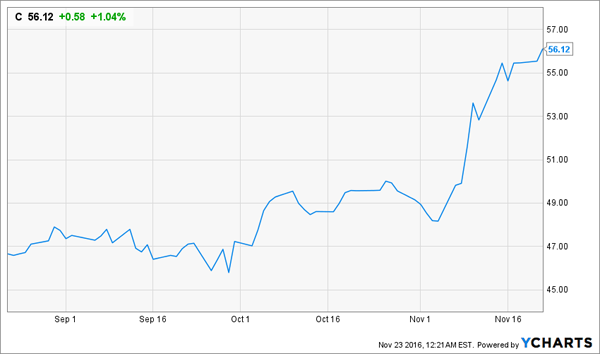 After Citi’s big rise since Election Day, I see no reason to get in now, particularly when there are far better—and cheaper—options available.

Most investors see Visa (V) as a financial firm, but it’s really more of a tech player that needs to compete—and partner—with companies such as PayPal (PYPL), Square (SQ) and Apple (AAPL). Visa has done an excellent job, and its massive network, which spans more than 200 countries, gives it what Warren Buffett calls an “economic moat”—an edge that’s hard for competitors to match.

The market has rewarded the stock accordingly: 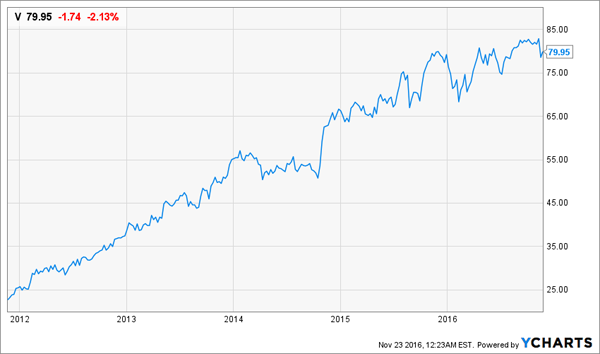 The downside to that big gain is that V yields just 0.7% today. People buy it because they expect that dividend to grow, causing the yield on their initial buy to multiply.

Let’s do the math. 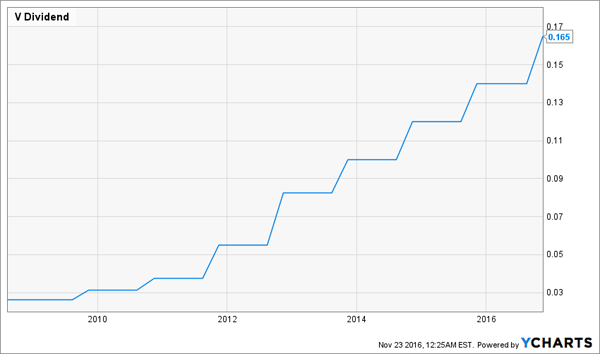 The dividend is clearly growing, having soared more than fivefold in the last five years. Assuming it does that over the next decade, the dividend will be $3.96—or a 5.0% yield on a buy made today. That’s not bad, but I can get that yield even faster with dividend-growth stocks that are yielding more right now.

That doesn’t mean I’d never own V; it has a place in a diversified portfolio. But it should be bought when it’s underpriced, not when it’s overpriced. And right now V is pricey. 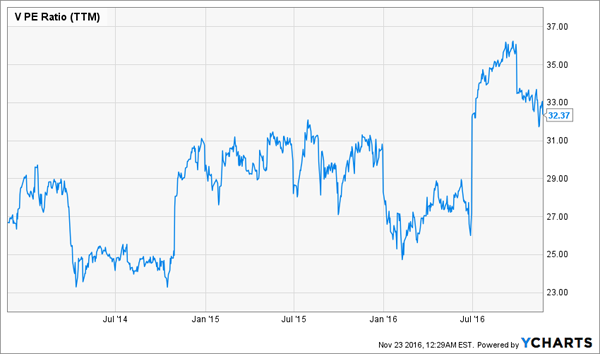 Looking at the company’s P/E ratio, we see it’s jumped recently on good earnings and is 33% higher than it was at the beginning of this year. I’d like to wait until its P/E gets back to the mid-20s before I’d make a move.

In other words, sell V now, enjoy the gains, and keep the stock on your watch list.

PetroChina: The Worst Oil Stock You Could Buy

Unlike Visa, the final stock on my list is one you need to sell yesterday. I’m talking about PetroChina (PTR).

This government-owned company only really exists because of the government control of China’s economy, which should already set off alarm bells. If that doesn’t bother you, though, take a look at the stock’s P/E ratio: 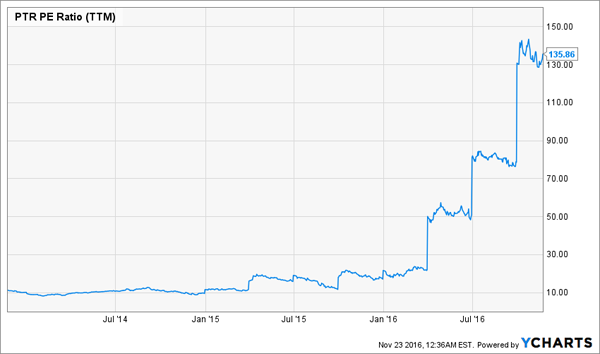 Right now, PTR’s earnings are more expensive than those of Google (GOOGL) or Facebook (FB). And that nosebleed valuation comes with a lot of “ifs”. For example, the company’s bottom line could grow if oil prices go up, and if the strong US dollar keeps enhancing the value of PTR’s sales when they’re translated into yuan … and if the company’s combined restructuring and expansion efforts pay off.

Then there’s the dividend problem. 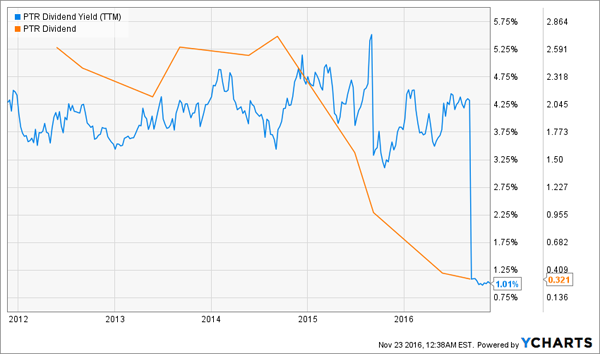 Not only is the dividend yield a paltry 1.0%, but the payout itself has been going down for two years. Yes, this coincided with the collapse in oil, but look at the dividend before that—it wasn’t exactly on an upward trajectory.

The bottom line? Stay away from PTR. It’s not even worth gambling on with money you can afford to lose.

How to Collect $40,000 in Income—Starting Today

Why mess around with these dividend laggards when you can invest in the simple 6-stock income portfolio I just released? Unlike the overhyped financial stocks above (and the disaster that is PetroChina), it yields a recession-proof 8.0%.

The 3 laggards above aren’t even in the same league: to get $40,000 in yearly income like that out of them, you’d have to invest about $4 million!

And I shudder to think of the risk you’d be taking.

But you can sleep soundly at night if you hold the overlooked stocks in my new income portfolio. This highly diversified collection of investments throws off high, safe yields of 7.7%, 8.7% and even 11.0%! But the portfolio’s average yield comes out to 8.0%.

With an income stream like that, many retirees could check out of the workforce and live on dividends alone, without ever having to touch their capital!

Most investors know this is how they should approach retirement investing … but they make the fatal mistake of limiting themselves to the misers of the S&P 500, which just don’t pay enough.

I can’t wait to show you the nuts and bolts of my strategy and the 6 powerful investments it’s based on. Click here and I’ll give you all the details and reveal the names, ticker symbols and buy prices of these high-income wonders.