Bad news: your job is getting harder.

According to S&P Dow Jones Indices, US companies collectively increased their dividends by $6.0 billion in the third quarter (net of cancellations).

Sounds great, right? Too bad that number has plunged from the $7.3 billion in hikes announced in the second quarter—not to mention the $10.0 billion of increases rolled out in the third quarter of 2015.

The bottom line? Dividend growth is slowing—and faster than most investors think.

Worse, your odds of getting whacked by a surprise dividend cut are on the rise: the number of companies slashing their payouts hit 667 in the 12 months ended September 30, up 55.5% from the previous 12-month period.

There was a time when you could find safe, outsized dividend growth by simply picking from the list of Dividend Aristocrats (or the S&P 500 companies that have raised their payouts for 25 years or more).

But these days, many of these so-called aristocrats are pretenders, dribbling out wimpy $0.01-a-year dividend hikes, just enough to keep their membership in the club. I’m looking at you, Wal-Mart (WMT), AT&T (T) and Procter & Gamble (PG). 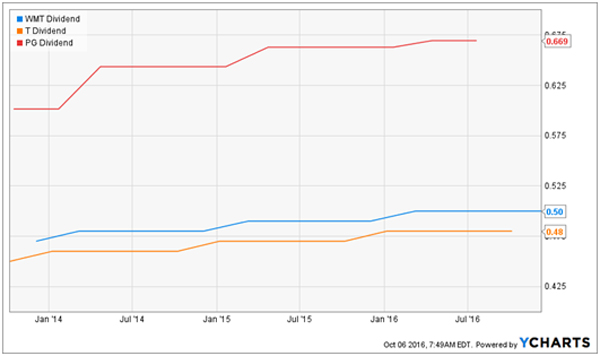 But don’t worry, because today I’ve got four stocks that still throw off hefty dividend hikes regularly. And unlike many Dividend Aristocrats and utility stocks, they’re cheap right now.

Better yet, I expect all four to announce double-digit payout hikes right away—this month—so you can look forward to a nice near-term pop in the share price, too.

Cintas (CTAS): Plenty of income-seekers dismiss industrial stocks because of their low dividend yields and potential for higher volatility.

That’s too bad, because there are still bargains to be had in the industrial space. And you can offset any volatility and quickly boost the yield on your initial buy if you focus on industrials that regularly deliver big, steady payout increases.

Take Cintas, which trades at a reasonable 17.0 times trailing-twelve-month earnings. The stock’s forward dividend yield is just 0.9% today, but the stars are aligned for Cintas to drop a big dividend hike on shareholders later this month.

Because that’s exactly what’s happened in the past: the company has hiked its payout for 32 straight years, and those increases are no small beer: in the past decade, Cintas’s dividend has risen 17% annually, on average (the company pays dividends once a year). It also handed investors a nice $0.85 special dividend in December 2014.

The result? A nice, smooth climb in the share price: 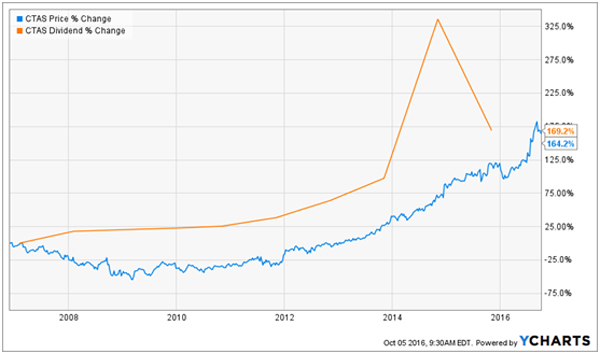 The company’s business is simple: it supplies uniforms and cleaning services to commercial clients. But its scale (it has over one million customers, 400 facilities and 10,000 delivery trucks) makes it tough for competitors to elbow their way in.

Right now, Cintas is firing on all cylinders: in its recently released quarterly results, earnings per share (EPS) soared 35% from a year ago, to $1.26, easily topping the consensus forecast of $1.08. Revenue jumped 7.9%, to $1.29 billion, also beating the Street’s estimate of $1.28 billion.

With numbers like those, I’m looking for a 20% payout hike from this one in the next week or two. That makes now the time to buy.

If you didn’t know Churchill Downs (CHDN), the company that owns the track where the Kentucky Derby is run every year, is publicly traded, you’re not alone. It boasts a market capitalization of just $2.4 billion, so it doesn’t get a lot of analyst attention (just five cover it as I write this).

And even if you do know of the stock, you may not know that it goes well beyond the historic racetrack, with four other tracks, six casinos and an online gambling arm also under its umbrella.

Like Cintas, Churchill has a low current yield of 0.8% and pays dividends annually. But its dividend-growth record makes the payout worth the wait: in the last six years, Churchill has juiced the dividend by 130%, helping drive a 278% rise in the share price: 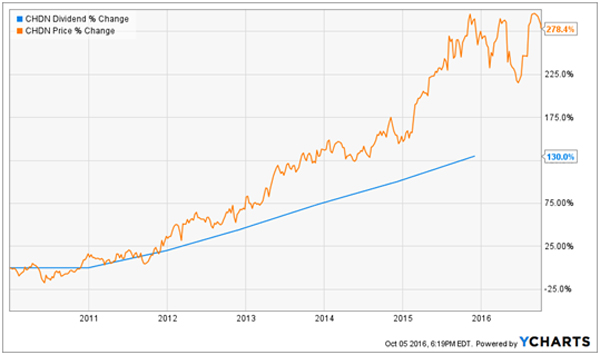 The Kentucky Derby is growing, with attendance up 3% from last year’s record, and the company’s online division is benefiting from the explosive growth of mobile gaming.

The analysts that cover CHDN are calling for a 55% profit increase for all of 2016, putting a dividend hike of at least 15% on the table. Churchill usually announces dividend increases with its third-quarter results, which are due out October 27, so you’ll want to make a move before then.

Texas Instruments (TXN) isn’t as cheap now as it was at the beginning of the year, before the stock went on a big run that raised its P/E ratio to 23.8 while cutting its forward yield to 2.2%.

But it’s still a great buy, because thanks to its explosive dividend growth (850% in the past decade!).

Continued dividend increases—easily achievable thanks to its 49% payout ratio—put a floor under the share price and drive further upside.

That floor gets even thicker when you add the rising earnings the company is reporting thanks to its shift away from volatile areas like smartphones and PCs and toward making chips for cars, industrial equipment and communications gear.

The shift is nicely smoothing out TXN’s revenue stream, providing a nice backstop to earnings (and dividends): 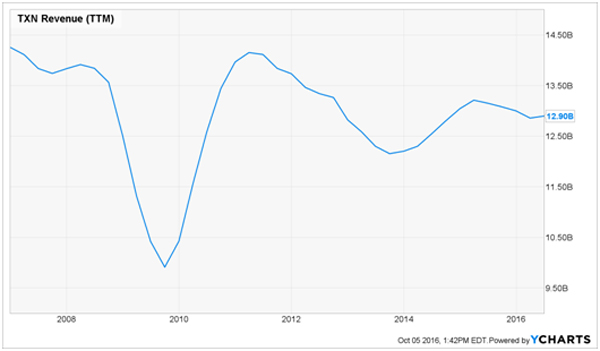 I expect the next dividend hike to come any day now, and I think the stock still has plenty of room to run, so now’s the time to get in.

AbbVie (ABBV) makes the world’s top-selling drug, anti-inflammatory Humira, which hit $14 billion in sales last year. But that success has rattled some investors’ nerves, because Humira will start losing patent protection in late 2016.

That’s good news for us, because this overblown fear has served up a buying opportunity: AbbVie trades at 18.2 times its last 12 months of earnings, a big discount to rivals Johnson & Johnson (JNJ), at 22.3, and Eli Lilly (LLY), at 34.9.

Why do I say overblown? Because AbbVie has patents on everything from Humira’s formulation methods to how it’s delivered that will keep a generic rival on the sidelines for six more years—till 2022.

Meantime, the company boasts a strong pipeline, which it’s bolstering through R&D and acquisitions. Its latest buys include lung-cancer treatment Rova T, which AbbVie feels could post annual sales of $5 billion, and three-year-old cancer drug Imbruvica, which could deliver another $3 billion. 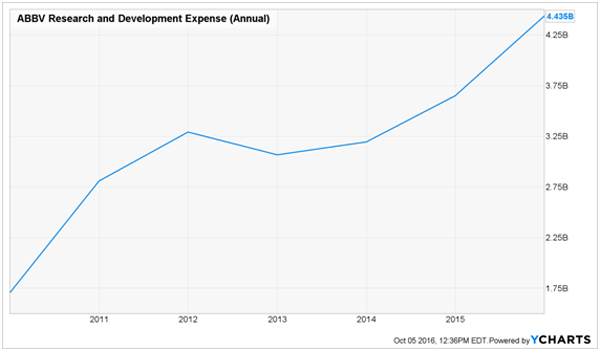 The stock yields 3.6% today, and AbbVie has raised its payout 42% since being spun off from Abbott Laboratories (ABT) in 2013.

All 4 of these stocks are great picks now, but even with their regular payout hikes, they just can’t deliver enough income to achieve what every investor should be shooting for: a retirement portfolio that lets you live on dividends alone—with no need to sell shares.

This is important for two reasons: it lets you leave a lasting legacy for your kids and grandkids, and a portfolio built this way is far more durable during market downturns. That’s because you won’t have to sell shares at fire-sale prices just to pay the bills.

Instead, you can kick back and let the dividend checks roll in until the market turns up again.

Most investors know this is the right way to look at retirement. The problem is that even a million dollars in Dividend Aristocrats yielding 2% and 3% doesn’t generate enough income to make it happen.

That’s where the 6 investments I’ve found come in. They’re from 3 ignored asset classes known to throw off safe yields of 6%, 7%, 8% and more.

In fact, these 6 investments are so safe I’ve made them the cornerstones of my “No-Withdrawal” retirement portfolio.

Click here to learn my complete strategy, how these overlooked investments work and get my best buys for safe 6%+ payouts now.