The REIT market has been on a tear in 2016. From the start of the year to October 1, the SPDR Dow Jones REIT ETF (RWR) gained over 6% while heavy-hitters like the Realty Income Trust (O) and Digital Realty Trust (DLR) rose more than 28%.

Now we’re in the midst of a REIT correction, and it’s hitting the best-performing REITs the most. That’s to be expected—after so many months of relentless strength, these names need to come back to Earth. And now it’s happening – just look at this chart:

What Comes Up Must Come Down—But How Far Down? 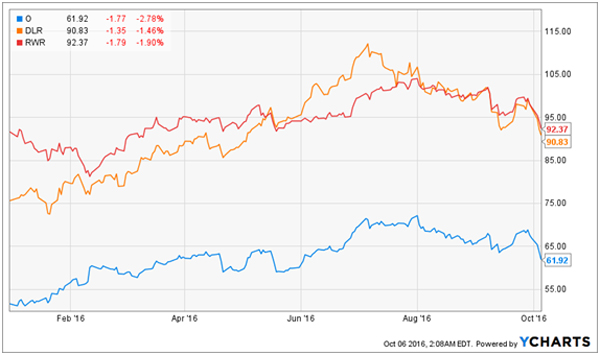 After months of massively outperforming the market, both O and DLR are now falling fast. Fundamentally they remain good investments, though. They boast great financial metrics, strong and growing operations and are still well positioned to increase their dividends over the next year. And investors can’t complain—they’re still up 20% year-to-date.

At least they are for now.

October has been rough for REITs, with a 10% decline in stock price for O and an 8.5% decline for DLR since the end of September. No one knows when this weakness will stop, but we do know this means it’s time to consider REITs more seriously.

That doesn’t mean we simply buy O and DLR and call it a day. Yes, these are good companies. But the market knows this too, and has priced them quite high.

There are equally good but lesser known REITs available. Thanks to their relative obscurity they trade at discounts to these blue chip names. These values are underpriced relative to their potential, AND they pay higher yields to boot.

Let’s highlight three of them now.

6.8% Yields From This Healthcare Landlord

Let’s start with Sabra Health Care REIT (SBRA), a solid healthcare REIT that has fallen 5.2% since the end of September. Compare that to the biggest healthcare REIT—HCP Inc. (HCP)—which has fallen 7.7% in the same time period. Yet SBRA has outperformed HCP over the past year, rising 6% versus HCP’s 3.3% drop.

Not just that, SBRA’s been less volatile than HCP.

A Smoother Ride Going Up 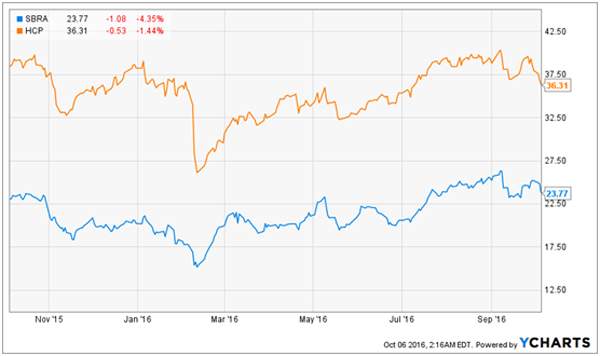 Over the past year SBRA hasn’t seen the kind of radical price drops that HCP has, and it’s been rising more steadily than HCP. This is surprising given that SBRA is a relatively new REIT.

Since going public in 2014, the company has seen annual revenues rise over 30% for all but the last two quarters, while funds from operations (FFO) have risen about 6% over the last two quarters. With FFO of $2.29 and dividends paid of just $1.68, there is plenty of room for a dividend increase.

Why so cheap? Partly because of its small size, but this also brings growth potential. Combine this value with  solid earnings and a relatively low debt load, and there’s good reason to have confidence in this 6.8% yielder.

Kite Realty Group (KRG) is another under-the-radar REIT with a big dividend. With a market cap of just $2.2 billion, it’s much smaller than its competitors in the retail shopping center leasing industry. This is partly why it’s priced so cheaply. At a 12.7 price-to-FFO ratio, it’s one of the cheaper REITs out there.

But there’s no reason for it to be so cheap. Its FFO over the last twelve months was $2.05 yet it paid only $1.15 in dividends. That’s a 178% dividend coverage ratio (defined as FFO divided by actual payouts) – a safety level almost unheard of in the REIT universe.

Compare that to the beloved O, which has a dividend coverage ratio closer to 140%. Yet KRG has a larger dividend (4.3% versus 3.8%). This hidden gem is a better buy. 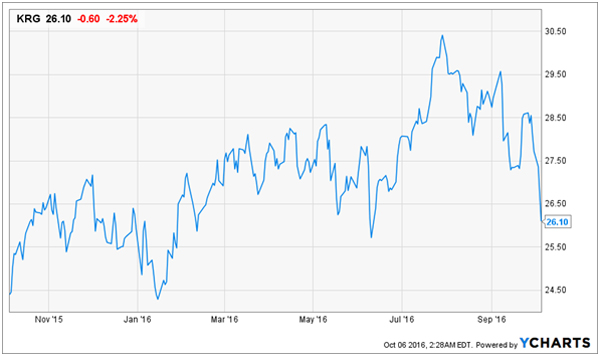 Also note the stock’s low price is a result of recent severe weakness. That makes it a better time to buy KRG than any other point in 2016, especially considering the likelihood that this dividend is only going to go up.

Finally we’ll round out our underappreciated portfolio with an entirely different REIT: STAG Industrial (STAG). This company specializes in manufacturing and light industrial properties throughout America, including logistics centers, warehouses and flexible office buildings. These are dull properties to be sure, but STAG’s 6.2% dividend yield is far from boring.

Yet the market is beating up STAG. It’s down over 9% from the end of September, which erases a lot of its prior gains for the year: 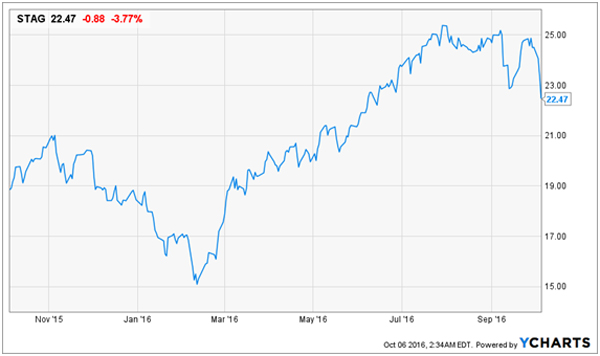 Even with the sudden fall, STAG is still up over 20% year-to-date. So is it really the right time to jump in?

Yes, and for one clear reason: fundamentals. The REIT’s FFO from the last twelve months is $1.56, giving it a price-to-FFO ratio of just 14.4. Again that’s on the higher end of our picks here, but is still far below most REITs.

Meanwhile STAG’s business is exploding. Take a look at this revenue chart: 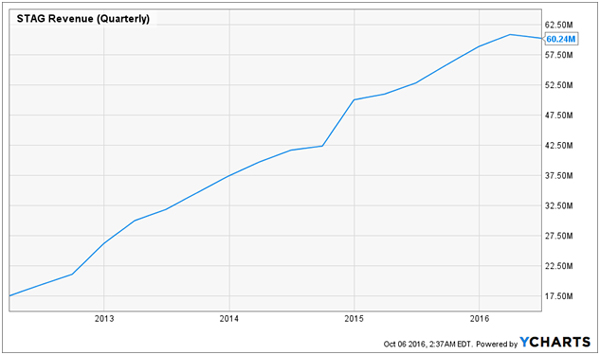 This company is growing quickly, and it’s done so in a very healthy way. Just look at the firm’s financial debt-to-equity ratio:

This is an impressive feat: growing the company without growing the debt load. STAG management has proven its competence and ability to grow, which means we’ll accept buying after a 20% run-up, especially since we’re banking 6.2% dividends.

The REIT universe is large, and I have three REITs in my No Withdrawal Portfolio that I like even better. I’ve taken advantage of the high and growing dividends of selected high quality REITs to build a portfolio that yields 8%.

Of course I’m not just using REITs for my portfolio. I’m also using bond funds, stocks and other assets that retirees can own and never have to worry about a market downturn again. Click here and I’ll show you how this 8% retirement portfolio works, and specifically what to buy (including names and tickers) to create your own.