5 Dividends Growing Up to 20% Per Year

Dividend Aristocrats are popular. Too popular, if you ask me.

I’ll concede that the surest, safest way big stock market gains is dividend growth. Over time, stock prices are literally pulled higher by their payouts. Their dividends act as magnets that pull their shares higher and make their shareholders rich.

The Aristocrats have delivered plenty of wealth. Heck, to be admitted to the club they must have a track record of 25 annual dividend hikes in a row. At minimum.

Which is fantastic past performance. Problem is, the stock market looks ahead.

Many of these stocks are slowing down. Some—such as Johnson & Johnson (JNJ) and Coca-Cola (KO)—have elevated payout ratios of anywhere between 60% to 90%. This puts a ceiling on their next dividend raise because these firms are already paying out 60% to 90% of their profits.

In many cases, these stocks are expensive, too. Check out these price-to-earnings (P/E) ratios with respect to their long-term growth rates:

High P/Es for Such Low Growth

We are better off buying the Aristocrats of tomorrow. I’m talking about under the radar stocks with their best days ahead of them. Plus, payout ratios with room to grow.

The DIVCON system by Reality Shares is a handy way to find these gems. It ranks more than a thousand dividend-paying stocks not just on their ability to maintain their payouts, but also their ability to grow them over time.

DIVCON examines several metrics to compile its ratings. For instance, it likes a high levered free cash flow-to-dividend ratio, which means the company still is flush with cash even after making its regular distributions. That means the dividend is both well-covered and has plenty of room to grow further.

Importantly, it breaks down stocks into simple-to-understand 1-to-5 ratings, where DIVCON 1 and 2 stocks feature weak dividends in danger of being cut in the future, where DIVCON 4 and 5 stocks are about as sturdy as they come. The 4s and 5s can really hike their payouts.

Take, for instance, these five stocks that have at a minimum doubled their dividends over the past five years. They not only have the track record—but, according to DIVCON, they have at least the potential to repeat the feat in the future.

Tetra Tech (TTEK) is one of the world’s top providers of consulting and engineering services, which it provides through a network of 21,000 associates worldwide.

Tetra Tech does just about everything, from helping countries produce clean water, to providing climate change modeling, to offering green design plans, to even drawing up plans for winter roads and ice bridge building. In terms of the less spectacular, it provides structural engineering, solid waste management services, civil engineering, construction management and much more.

One thing Tetra Tech isn’t, however, is a growth play—at least not on the top line. But it excels at squeezing profits out of its sales, which it then ships out to investors in the form of dividends. 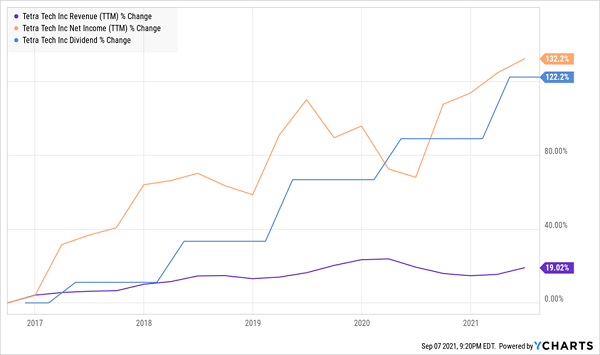 The DIVCON ratings system not only gives TTEK its highest rating of 5, but also one of its highest composite scores based on factors such as earnings growth, Altman Z-score and prior dividend growth—indeed, Tetra Tech’s payout has ballooned by 122% over the past five years.

What makes explosive dividend growth likely to continue is the fact that, despite spending so much on distributions, the dividend only accounts for 20% of the earnings. DIVCON also notes that Tetra Tech generates 7x the cash flow necessary to keep up with its quarterly payout.

You’ll be unsurprised to find that things are going just swimmingly for MDC amid the COVID-prompted boom in home sales. 2020 revenues climbed more than 18% year-over-year; profits jumped 54%. And the good times keep rolling. MDC’s unit deliveries surged 43% in the second quarter, to 2,722, with an average selling price 8% greater than the year-ago quarter. That drove overall sales and net income 54% and 83% higher, respectively.

Importantly, though, this isn’t new. MDC has been rapidly growing its operations for years, which has in turn resulted in growing profits that it’s eager to share with investors:

It’s Not Just a COVID Bump 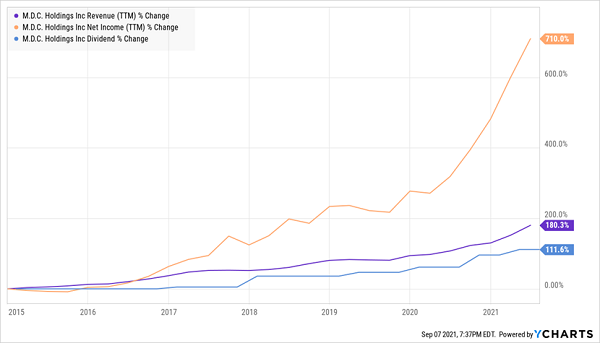 DIVCON has tagged MDC for a number of reasons—namely, its rapid profit growth and free cash flow that’s well more than twice times what’s needed to cover the payout. Past that, a mere 20% payout ratio implies not only that there’s tons of room for the dividend to expand—but that MDC can afford to do it at the rapid rate it has maintained for years.

Naturally, 2020 was great to Pool Corp.—as people were forced to work from home, they decided to invest in their homes to make them more comfortable, and in many cases, that meant aquatic upgrades. Revenues climbed 23%. Net income popped by 40%. More recently, the company announced record Q2 sales and profits; the results were so stellar that Pool Corp. upgraded its full-year earnings guidance by 15%.

But again, like MDC, it’s all part of a longer trend:

Pool Corp. Has Been Growing in Popularity for Years 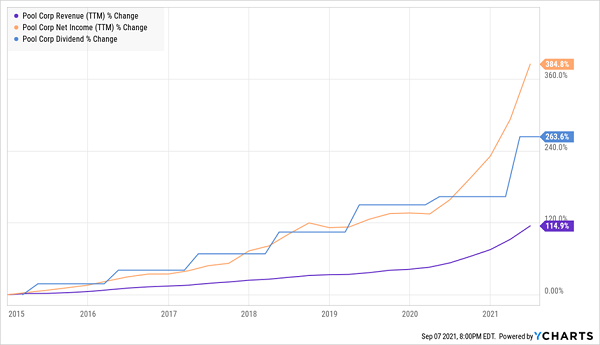 POOL’s dividend has exploded by 125% over the past five years, including a hefty 38% hike announced in early May—right on cue. And DIVCON believes it can do more. The main tell: free cash flow that’s roughly 460% of what it pays in dividends.

However, Pool also boasts a few traits that speak to the dividend’s safety, too. For instance, POOL actually spends roughly 5x on buybacks what it does on the distribution—meaning that if the payout ever is in trouble, it can peel back those repurchases to keep the dividend intact.

Goldman Sachs (GS), Morgan Stanley (MS) and JPMorgan Chase (JPM) might make the most headlines, but last year, no one advised more M&A deals in the U.S. than Houlihan Lokey (HLI).

This mid-cap investment advisory firm has recently been involved in transactions such as Morgan Stanley’s buyout of Eaton Vance, Berkshire Partners’ purchase of Foodchain and Unilever’s (UL) acquisition of Smartypants. But it also has made an M&A move of its own, buying out Japanese multinational investment bank GCA Corporation for nearly $600 million—its largest transaction ever.

There’s understandable integration risk here, which is a reason to tread carefully. But HLI has demonstrated fairly consistent growth over the past few years—and that could continue if Houlihan can properly manage its newfound scale.

Houlihan Lokey: Will M&A Fuel the Next Growth Spurt? 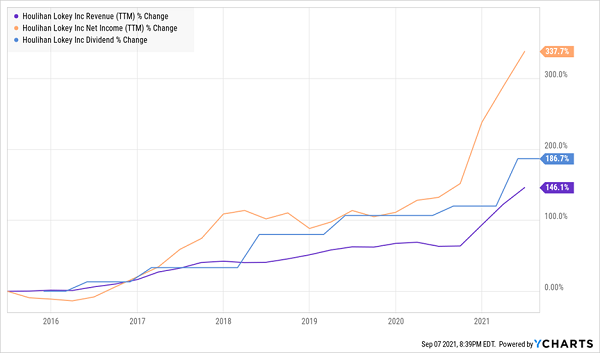 Houlihan Lokey remains a free cash flow machine, which is precisely why the DVICON system gives HLI its top rating. Specifically, Houlihan generates more than 6x the free cash flow it needs to maintain its payout. Its earnings payout ratio is also plenty low, at just 27%.

Will HLI grow its payout at the same clip it has since 2016? At 150%, that’s doubtful. But it could still run laps around most Aristocrats.

Evercore provides strategic and capital markets advisory services, as well as independent restructuring advice. It also offers up equity research and trading for more than 1,300 institutional investors across the globe.

While its growth hasn’t been as consistent as HLI, Evercore has nonetheless delivered over the years. 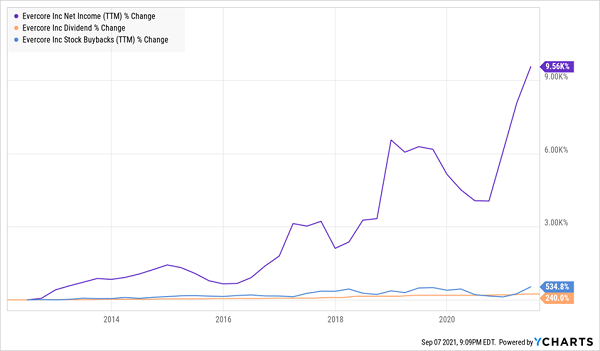 DIVCON has had Evercore on its radar for years, and for good reason. EVR’s expanding profits have funded not just a healthy swell in dividends—including a 119% hike over the past five years—but even more aggressive stock buybacks. But it has so much more to share. So says a payout ratio of less than 20%, and free cash flow that’s a whopping 800% of what it’s spending to fund its dividend program.

Rising dividends like these are how you and I will build our wealth on the back of The Great Reset.

I’m sure you see the Rest taking hold all around you. Hurting stores. Struggling restaurants. That strip mall you pass every day, wondering how many of its tenants will survive until we reach the flip side of COVID.

Meanwhile, the stock prices of Reset plays like Amazon (AMZN) and Shopify (SHOP) continue to rise into the stratosphere. Which brings us to our big quandary:

The Great American Reset is indeed a “thing.” But how do we safely invest in it?

Neither of these darling stocks pays a dividend. Both trade at white-hot earnings multiples. And Amazon in particular is under the federal government’s antitrust microscope.

Many investors are buying shares and hoping they continue higher. No thanks.

If we want to stay on the right side of the rest, we don’t want to find “the next Amazon.” Instead, we want to look for the stocks—dividend payers, of course—that are providing the “picks and shovels” powering the Reset.

During the gold rush of the 1840s, hordes flocked to California to get rich mining for gold. But the guys who made the real money didn’t actually mine anything. They were the entrepreneurs who sold the “pick and shovels” as well as booze, entertainment options and lodging to the hapless speculators.

We’re seeing the same phenomenon unfold in 2021. We’ll let the first-level types gamble with their dividend-less Amazons and Shopifys, while we calculated contrarians identify the pick-and-shovel payouts that:

And by the way: The valuations of the Reset-winner stocks we’re considering are quite reasonable, improving our chances of enjoying outstanding, market-clobbering long-term total returns.

That’s too bad for the mainstream financial types who overlook them, but just right for us.

Click here, and I’ll explain more about “The Great American Reset,” including my 7 favorite dividend stocks to capitalize on this once-in-a-decade opportunity!