Are you worried about a market meltdown in 2020? Fair enough–stocks went straight up for an entire decade, making a pullback more than due as we head into the 20s.

Now, more than ever, it’s vital that your portfolio is anchored by bulletproof dividend payers. If it’s not, read on, and I’ll introduce you to a few of the market’s five-star income plays—payouts so safe that even a worst-case recession scenario won’t touch them.

BofA Merrill Lynch analyst Michael Harnett, looking at recent developments such as our “phase one” deal with China and the U.K.’s recent elections, said stocks are “primed for Q1 2020 risk asset melt-up,” projecting that the S&P 500 will rip off a quick 5% by March. Not bad, right?

He goes on to say that 2020’s returns will be “front-loaded,” however. That’s a tell. Even more damning is that earlier term: “Melt-up.” A melt-up often isn’t rational. It’s often driven by “FOMO”—fear of missing out—as hesitant mom-‘n’-pop investors finally cave in to all the positive headlines and buy at sky-high prices. And it can often result in a harsh meltdown.

If that sounds familiar, it should. But if not, this should jog some memories:

Stocks Melted Up Into the Dot-Com Crash 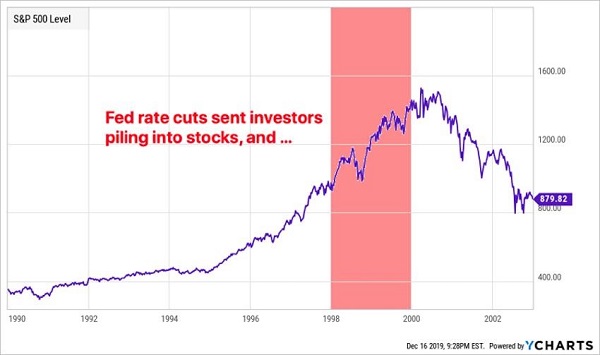 You don’t want to get caught with your pants down if we’re in the final innings of a similar melt-up.

Dividends generally will ensure you get paid even if your stocks are limping. That’s good. But the highest-quality dividend stocks will limp less, if at all, and will keep growing their payouts even if things get rough.

Really, these are the kinds of stocks you should own, rain or shine.

Let’s dig into a few “five-star” picks for the next decade–one that potentially could start off in a rocky way. Each of these picks pass muster with one of my favorite sources of dividend data: Blockforce Capital’s proprietary “DIVCON” system. Think of this as a dividend health test of sorts. The rating system takes numerous factors into account in evaluating the health of a dividend—cash flow, earnings, dividend trends and even external ratings—and assigns each stock a score from 1 to 5. DIVCON 1 means a stock is likely to cut its dividend.

We want DIVCON 5s—the highest-probability dividend raisers that are gushing cash and have a track record of heaping cash on investors. Here are five, yielding between 3.1% and 11.6%, that you should examine more closely as long-term holdings.

Evercore (EVR) isn’t an everyday name. Not for your average American, nor for your average investor. In fact, chances are, if you’ve heard of them, it’s because one of their analysts have sounded off on a stock du jour such as Netflix (NFLX) or McDonald’s (MCD).

But EVR does hold a lofty spot among these “five-star” payouts. Namely, while many DIVCON 5 stocks sport uber-safe dividends and often aggressively growing payouts, current yields are a little chintzy. Evercore is among the very highest yields in the group.

Evercore is heavily entrenched in advisory services—on a global scale. They provide investment research; they delve into strategic advisory activities on things such as mergers & acquisitions and activist-investing defenses; and they also offer investment management services to high-net-worth individuals, foundations and endowments. 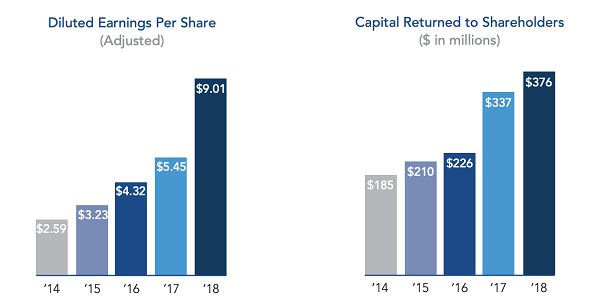 Yes, 2019 is expected to see a decent-sized pullback in profits before recovering next year, but investors might have overdone their selling of late: 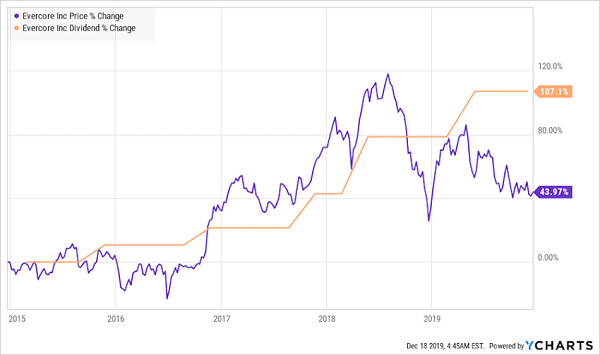 Evercore, which has doubled its dividend in just a half-decade, trades at just 9 times next year’s earnings amid what’s expected to be a high-single-digit bounceback. These kinds of value opportunities sometimes pop up in under-covered stocks.

Just be careful. EVR’s skinflint payout ratio of just 27% means the payout is absolutely safe, come what may. That’s not the concern. What should worry investors is that a significant market downturn would likely hit Evercore and its core business much harder than others. Let’s keep looking.

No one will ever accuse Mastercard (MA) of being a value play. At 32-times 2020 profits and a dividend yield you’d need a microscope to see, this payment-services stock looks like a hyper-growth tech play with a baby-fresh dividend.

However, reality is a little different.

Mastercard is indeed an impressive growth play. Its earnings and revenues have each been growing by about 10% compounded over the past four years, which is saying something for a roughly $300 billion mega-cap. What’s more, Wall Street’s pros are expecting better-than-usual growth next year: an improvement of roughly 14% and 18% on the top and bottom lines, respectively.

But the dividend is established, and it has a rock-solid foundation. Quarterly payments have rocketed 110% higher since 2016—a rapid pace that led me to call out the stock’s potential on Dec. 1, 2018. Since then? 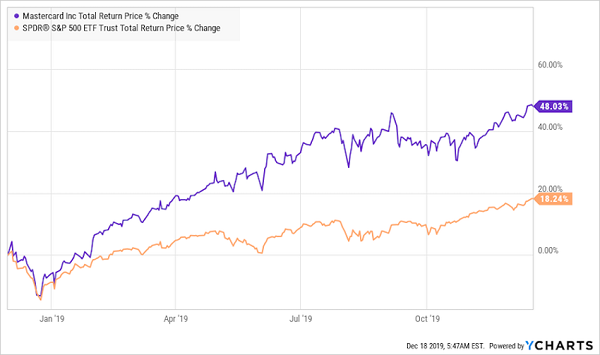 Mastercard isn’t anywhere near done, either. Its payout ratio is just 15%. Even if it tripled its payout tomorrow, that dividend would still look bulletproof by any typical measure, leading to its DIVCON 5 rating.

And while Mastercard wouldn’t exactly welcome an economic slowdown, it still has a massive market to gobble up. An astonishingly high percentage of the globe remains cash-based, meaning MA should find avenues for growth, or at least ways to counter potential weakness in the U.S., for years to come.

Fastenal (FAST) does indeed specialize in fasteners such as bolts, screws, nuts and pins. But it’s so much more.

Fastenal services the nation via 3,200 branches and customer-specific on-sites, doling out not just a wide array of industrial supplies spanning electronics and HVAC to packaging gear and janitorial products, but even logistics solutions and supply consulting.

It’s quite literally the backbone of America’s economic growth—no wonder, then, that the company boasts a 377% return in the past decade. That’s about 120 percentage points better than the index in that time. FAST shares continued to outperform in 2019, streaking 45% year-to-date, amid a year in which it has unveiled good (but not great) financial results.

The problem? There’s no “under-covered discount” on this stock. FAST has plenty of covering analysts, and those pros are heading toward the sidelines. As analysts start to make their calls for the year ahead, this stock has racked up just one Buy call across 11 notes over the past three months. One of those is a Sell from Wolfe Research, which sees an overpriced stock (25 times estimates) tangoing with “elevated” expectations. That’s a worrisome combination if we are about to hit some market turbulence.

The dividend is safe enough, but I’ve done a deep dive into DIVCON’s data and found devils in the details. Fastenal does merit a DIVCON 5 rating, but its underlying score is near the bottom of that tier, and it’s propped up by a few trailing measures such as past profit growth. Meanwhile, FAST’s earnings payout ratio is actually a merely OK 63%, and its free-cash-flow-to-dividend (FCF/D) of 112.9%, while not bad, is fourth-lowest among 88 DIVCON 5 stocks.

Right now, that answer is fuzzy. Domino’s earned those gains by writing one of the best turnaround stories in corporate history. In 2009, the company flat-out admitted to America that its pizza was garbage and began to reinvent its pie. The lesser-told part of the story is that CEO J. Patrick Doyle, hired in 2010 and known for his presence in commercials propping up its wildly improved pies, also pushed a swath of improvements in in-store, delivery and online technology.

Doyle stepped down in 2018, and the stock has been a roller-coaster ride ever since. 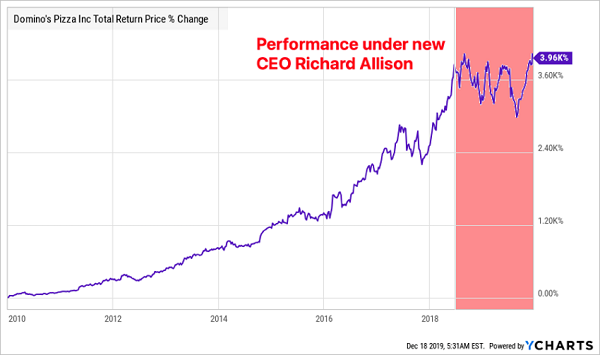 There’s nothing wrong with the dividend. It has blossomed by 160% in just five years and is covered with an excellent 27% payout ratio. Free cash flow is more than thrice what it needs to cover the dividend, too.

But the leadership change, though more than a year old, remains a considerable concern that bears watching. Meanwhile, the market expects solid high-single-digit growth out of DPZ for next year, but that’s been more than baked in, given a high forward P/E of 27. That’s a little too much risk.

Cummins is a global engines and power systems manufacturer that also boasts a distribution arm. Of late, the company has pushed itself into the 21st century by adding an “Electrified Power Segment” that offers hybrid and fully electric powertrain solutions.

Cummins doesn’t log breakneck growth, but it has been outpacing its peers over the past eight years with 7.6% compound average annual revenue growth. That growth sometimes comes in chunks. In 2018, revenues popped 16% and profits–even backing out the positive effect of the tax cuts—shot up 80%. 2019’s pace isn’t so great, with the company likely to report a small sales decline for the full year, but profits should improve by double-digits regardless.

CMI gives you a nearly 3% yield—high among DIVCON 5 stocks—on a dividend that has grown every year since 2006. Less than a third of its profits goes toward funding the payout, too, so the dividend is as safe as safe gets.

But Cummins itself admits that it is “entering a weak period in many markets” and has been “preparing for a downturn.” The company is being proactive by finding cost improvements and making strategic investments, but the outlook isn’t pretty. Analysts are projecting another 8% hit to sales and a 14% dip in profits. UBS’ Steven Fisher, who says to sell the stock, says that not only does 2020 look weak, but an anticipated rebound in 2021 is “less robust” than initially thought.

The payout might be safe, but what good is a 3% dividend if CMI shares end up kicking off the decade with a couple years of even modest declines?

This is no time for “but” stocks.

We’re entering 2020 in the back half of a bull market that’s too long in the tooth for comfort, and global risks are piling onto still-climbing but still-fragile investments.

If you’re thinking about leaning on income to keep your portfolio afloat, 2% or 3% yields simply aren’t going to cut it. That goes double for retirement investors, who can’t even pay the bills with that kind of income, let alone offset any portfolio losses.

Your dividend stocks have to protect, and grow, your hard-earned nest egg, rain or shine.

That’s precisely the inspiration behind my 5-stock “2008-proof” portfolio, which I’m going to GIVE you today.

With the Dow regularly lurching a stomach-churning 1,000 points (or more) in a single day during pullbacks, I’m sure a secure—and growing—7.5% dividend every single year would have a lot of appeal.