5 Dividends Paying Up to 8% (Ranked Worst to First)

Fact: there are still lots of big, cheap and safe dividends out there—but they’re going fast as this market floats higher.

So today we’re going to get right to it and look at four options for your portfolio now, ranked from worst to first.

The 10-year Treasury offers a “safety feature” mainstream investors love: no matter what happens, you’ll get your principal back after 10 years.

That’s actually a trap, though, because inflation gnaws at your nest egg the whole time, and your yield—1.6% today—won’t help you: it’s 40% below the rate of inflation, which jumped 2.6% year over year in March!

Even if you set that depressing fact aside, you’d still need to save $2.5 million to get $40,000 in income from a Treasury, which I see as the minimum most folks would need for a decent retirement.

Meantime, Treasuries have taken a beating this year, driving their yields up. Since inflation drives up Treasury yields (and depresses bond prices, which move in opposition to yields), that’s likely to continue, making buying now, and missing out on a potentially higher yield later, pretty unappealing. 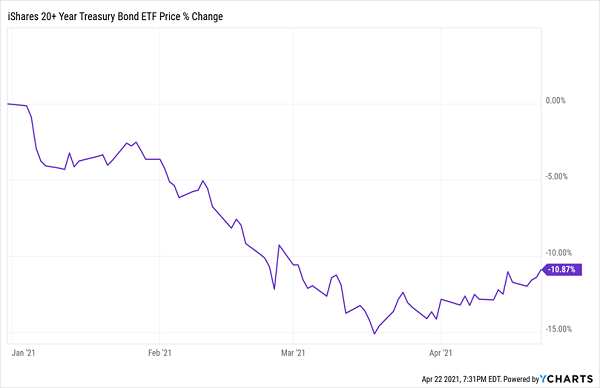 Next up is the dividend play everyone thinks of first—which is why it’s the most overrated! That would be the Dividend Aristocrats, or the 65 stocks that have raised their payouts for 25 straight years or more.

Great as that sounds, these stocks aren’t the place to look for current income: they only yield 1.9%, on average, today , which is just plain weak: it’s just a hair above the S&P 500 average of 1.3%. And bear in mind that the S&P 500 includes many stocks that pay no dividends at all!

And despite the Aristocrats’ growing dividends, these stocks trail the S&P 500 by total return (or with dividends included) over the last three years, going by the return of the benchmark ProShares S&P 500 Dividend Aristocrats ETF (NOBL):

Dividend Monarchy as Lame as the Real Thing 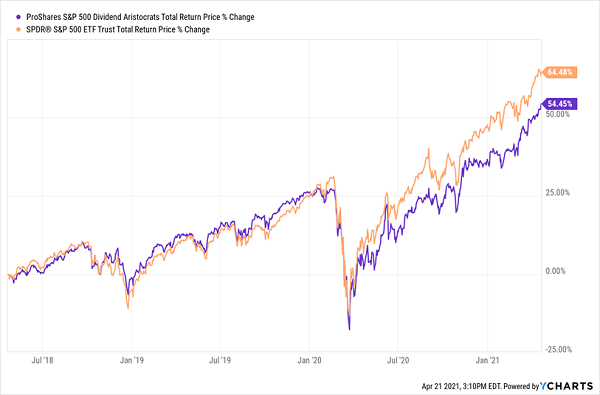 This isn’t to say that all Dividend Aristocrats are to be avoided. Ecolab (ECL), for example, handed us a tidy 31% return in a little over a year and a half after we added it to my Hidden Yields service’s portfolio in April 2018. But you do need to be choosy—and whatever you do, avoid buying these stocks through ETFs.

That brings us to corporate bonds, but we’re not going to go shopping in the investment-grade aisle. That’s because they’re a crowded trade, with many institutional players limited to only these corporates, which are mainly issued by big, well-established companies—think Apple (AAPL), Pfizer (PFE), Walmart (WMT) and the like—and therefore pay lousy coupon rates.

Instead, we’re going to hunt for bargains among non-investment grade, or “junk,” bonds, where yields are a lot higher. The ETF play here is the SPDR Bloomberg Barclays High-Yield Bond ETF (JNK), which offers a 30-day SEC yield of around 4% as I write this.

That’s better than you’ll get from investment-grade corporates, stocks or Treasuries, but it’s still lousy, historically speaking. (Especially when, by going a step further, we can get a far bigger payout from high-yield bonds—see our next pick, below).

There are a couple other reasons why JNK isn’t your best route:

With corporate bonds, you’re far better off buying through a closed-end fund (CEF), rather than an ETF, for a few reasons. The first is that CEFs are run by human portfolio managers, and the best ones are backed by firms with deep research tools. That means they also get first crack at the best corporates as they’re issued.

You simply can’t get either of these advantages from an algorithm-run ETF.

Next, as I mentioned a second ago, CEFs have three ways to pay us:

A great example of all three in action is the DoubleLine Income Solutions Fund (DSL), run by the so-called Bond God himself, Jeffrey Gundlach.

When we bought DSL four years ago, it traded at a 7% discount and yielded a gaudy 11%! Fast-forward to today, and that discount has narrowed to just 0.7% while paying a still very healthy 7.3%, far better than JNK’s payout. 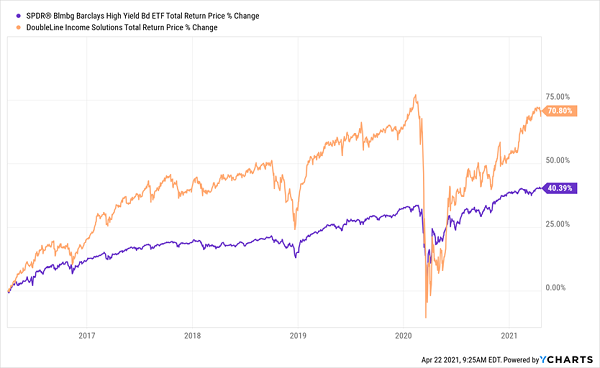 These days, some of the best deals in the bond space are in CEFs that hold international bonds, like the Western Asset High Income II Fund (HIX). The fund still trades at a discount (around 2% as I write this), as rising rates in the US have lured investors away from international issues.

Will that hamper HIX?

Nope. Because the fund’s dividend (paid monthly, by the way) yields 8% now, and its highest-paying bond is a 7.4%-yielding issue from French telecom firm SFR SA. How can a 1.6%-paying Treasury compete with that? It can’t, and we see this in HIX’s NAV, which moved up in the last month: 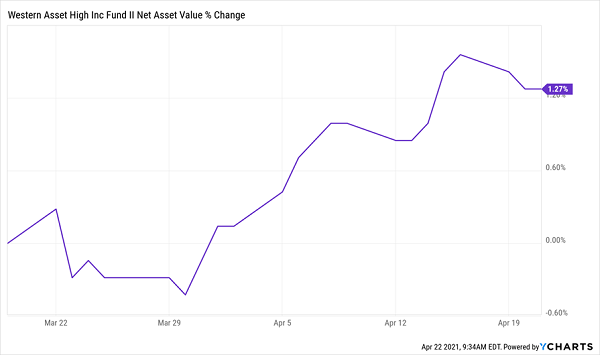 This, by the way, is a nice time to buy, when a CEF’s portfolio is showing strength, but the fund itself still trades at a discount.

When it comes to high-yield investments, the regular fare—stocks and bonds—are NOT your only option.

There’s another, even better play that gives us you MUCH more income than most bonds AND the unbeatable upside of a stock, too. These “profit-either-way” plays are normally the sole domain of billionaires, but there’s a backdoor way you and I can jump in—and grab two things we all crave in this now:

My research team and I have been working day and night to unearth all the details on these powerful VIP Shares. We’ve narrowed our list down to 2 specific tickers to buy right now, and we’ve put everything you need to know about both in an exclusive FREE report you can access right here.

This may be the most important investment information you receive all year—and I urge you to act now, because our opportunity to grab these unbeatable income plays won’t last long. Click here and get the full story.