5 High-Tech Cash Cows Yielding Up To 6%

The technology sector has long been the growth investor’s best friend, with tomorrow’s innovations fueling the breakneck gains necessary to generate big price returns. Traditionally there hasn’t been much to interest us dividend investors – until now.

Some tech companies have finally grown up. And while their profit growth has slowed, their shareholder returns have actually accelerated. These companies literally make more money than they know what to do with – so they are increasingly dishing it back as dividends.

Here are five tech titans with big cash flows paying yields up to 6%.

Qualcomm (QCOM) has wandered its way back into 4% yield territory, but right now, the wireless technology specialist is in extremely choppy waters.

QCOM shares have eaten 20%-plus losses since mid-January after Apple (AAPL) filed suit against the company, and the Federal Trade Commission filed charges against QCOM, with Apple mentioned by name in the complaint. The series of antitrust complaints put into jeopardy Qualcomm’s extremely high margins, garnered from licensing out its telecommunications technologies from a hoard of patents.

The company has already been slapped with an $853 million fine from South Korean regulators over similar antitrust concerns, and the company has been facing similar charges on the European front.

These legal woes threaten more than just the business model. They also will have regulators looking even more closely at the firm’s $38 billion deal to purchase NXP Semiconductors (NXPI), prompting Nomura to downgrade Qualcomm in January.

It’s unfortunate, because Qualcomm has been a serial dividend raiser that still had plenty of ceiling with a 65% payout ratio.

Could Qualcomm’s (QCOM) Dividend Generosity Be in Peril? 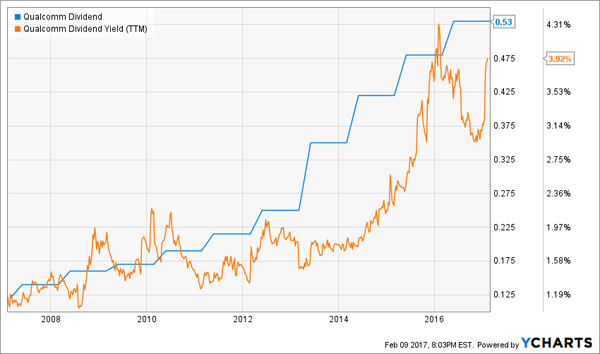 QCOM might be a playground for speculators banking on a big pop if the Apple, FTC and international legal action starts turning in Qualcomm’s favor, but for right now, this is not a long-term dividend buy-and-hold play.

NVE Corp (NVEC) isn’t a particularly new company – it was founded in 1989 and went public in 2000 – but its spintronics nanotechnology has been gaining in popularity for decades, and currently has the stock sniffing at all-time highs.

Spintronics, according to the company, “utilizes electron spin rather than electron charge to acquire, store and transmit information.” The technology has a wide range of uses. For instance, in Q3, the U.S. Army awarded NVE Corp a small $141,000 contract for “new ultra-fast spintronic radar detectors and spectrum analyzers based on arrays of metallic or metal/insulator nano-scale magnetic diodes.”

However, the stock’s rise doesn’t match up with the fundamentals, which include years of fairly stagnant top and bottom lines. But the real issue is the dividend, which doesn’t seem to add up. NVEC pays out $1 quarterly, yet earned just $2.53 last year, and is expected to bring in $2.76 and $2.73 in profits over the next two years. On an annual basis, dividends have outstripped operational cash flow over the past couple years, too. 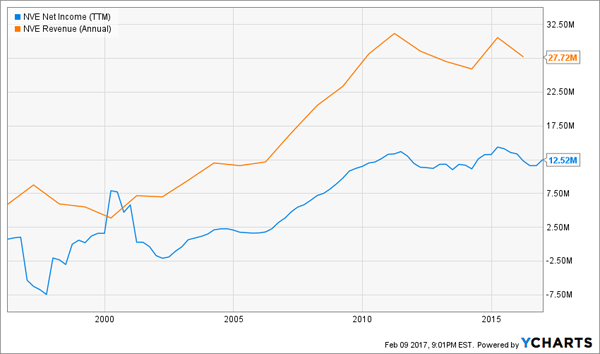 Nothing here screams imminent collapse, but this doesn’t look like a particularly secure payout, and if anything, hikes to the dividend seem unlikely. Plus, a forward P/E in the high 20s and prices near all-time highs signal that now would be a terrible time to speculate.

Seagate Technology (STX) is a longtime maker of hard disk drives, solid state drives and other electronic data storage solutions. It also has been the source of heartburn for investors, who enjoyed 600% gains from mid-2011 through 2015, then watched the bottom fall out by 70% through mid-2016.

Since then, STX has logged a 130% rebound to reach its current price around $46.

The one constant over that time has been a rapidly improved dividend that surged from 18 cents to the current 63-cent payout – a 250% increase that has shares yielding well more than 5% even as shares continue to run hot.

Looking forward, the company’s improved profitability means the dividend is safe and likely has room for improvement. Analysts are tracking earnings of $4.49 per share this year and $4.55 next, which puts the company’s payout ratio at a comfortable 55%.

But growth seems almost entirely out of the picture. Revenues have been on the decline since 2012, and the top line is expected to slip in each of the next two years – all of this mirroring the shrinking PC market that Seagate feeds off. 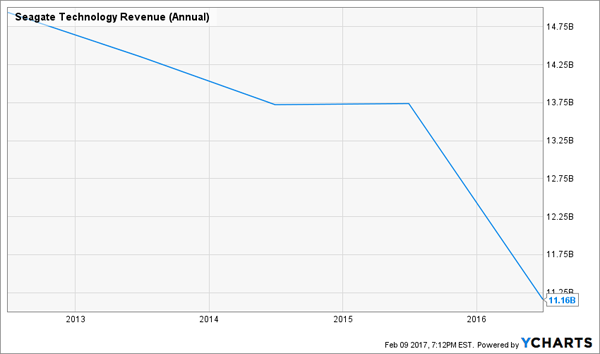 Seagate should continue to be a considerable source of income going forward, and may yield well more than the 5.5% it currently boasts. Any additional capital gains from here would simply be gravy … but don’t bet the farm on them.

Data storage real estate investment trust Iron Mountain (IRM) has been pointed in the same general direction – up – ever since its 1996 initial public offering, but the going over the past few years has been simply nauseating. In just the past year’s worth of trading alone, IRM has registered a 55% up-leg, a 25% dive and a 16% rebound.

Still, if you’re willing to close your eyes and wait out the roller coaster, IRM can be a fruitful investment.

While Iron Mountain offers a number of digital services, including cloud backup and data management, it also provides actual physical records storage, shredding and even business solutions. In other words, it provides legacy physical services in a niche that few companies want to compete in, and it has its hands in the growing digital storage cookie jar.

The company reorganized as a REIT in 2014, and that began Iron Mountain’s transformation into a full-blown dividend powerhouse. The company’s most recent 48.5-cent payout is an 80% improvement over its last quarterly distribution from its pre-REIT life. And IRM’s substantial yield has powered the majority of the stock’s returns over the past few years. 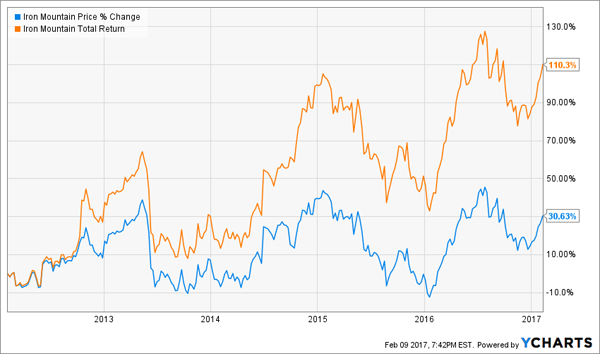 Iron Mountain’s financials are as temperamental as the share price, with revenues and earnings vacillating from year to year. But the pure income potential makes IRM worth it.

Nokia (NOK) is no longer the fine purveyor of seemingly invincible cellular phones, but instead plies its trade in telecommunications infrastructure and, like Qualcomm, licensing out its expansive set of technology patents.

However, Nokia has come up against a few walls.

Nokia, which previously went to war with Apple over patent infringement, is swinging at the Cupertino tech giant again over a set of 32 tech patents. As a result, management says roughly 150 million euros’ worth of patents are off the table for 2017.

That’s a shorter-term problem that could rectify itself in a year. More troubling for Nokia is weakness in the wireless market that has led to a significant downturn in revenues that didn’t get any better in 2016, sliding 10% year-over-year.

Nokia’s annual dividend, while generous at a roughly 6% yield, has been on a longer-term decline as well.

Nokia (NOK) Pays a Lot, But Is Paying Less 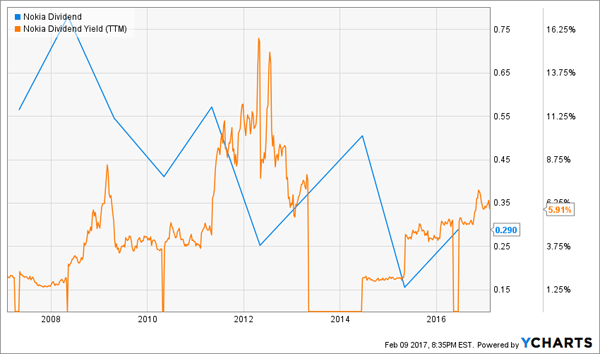 Nokia’s annual dividend isn’t nearly as consistent as typical American quarterly dividends, which even in leaner times tend to at least remain constant. Between that and an absence of growth, there’s no reason to chase yield here.

It’s tempting to fish for high yields in technology for the simple sake of diversifying your income portfolio. But if you overextend your reach for yield at the cost of growth, you could be dooming your nest egg to years of retirement-killing underperformance.

You need the total package – dividends and growth and resilience to any kind of headline if you want to keep growing your wealth through what could be a shaky few years.

You need the kinds of dividend stocks that I’ve highlighted in my new FREE report, “The Best 7% Dividends for 2017.”

The Best 7% Dividends for 2017 features bulletproof yields of 7%, 8% … even double digits that will provide the kind of substantial income you need to get ahead over the long haul. More importantly, these stocks can go on the offensive when bull markets take hold, but they also won’t slink back at the first sniff of macroeconomic uncertainty.

The name of the game right now is headline immunity. The Federal Reserve could raise interest rates several times this year, or duck back to just one hike like the past couple of years … or it could end up staying mum altogether. President Donald Trump continues to pump out executive orders at a frenetic pace, and when those aren’t moving the market, his all-day, all-night tweets are!

And don’t forget: The Brexit still looms, questionable Chinese economic data can come back to bite markets in a heartbeat, and we’re always one Middle East conflict from oil sending Wall Street into a panic.

That’s why my latest stock research has resulted in these picks – because they offer not just a 1-2 punch of yields and growth, but also all-weather performance no matter what the news brings.

The only thing you’ll need to worry about is how you’re going to enjoy your retirement. That’s because each of these stock picks offer big dividend yields AND 12% to 38% price upside! That means you’re not just collecting dividends while maintaining your nest egg – you’re growing your funds in retirement!

Bulletproof your retirement portfolio today! Click here and I’ll provide you with THREE special reports outlining each of my Best 7% Dividends for 2017 – names, tickers, buy prices and full analysis of their shocking upside potential – for absolutely FREE!