Why choose between dividends and growth when we can have both?

Thanks to popular payout programs from the likes of Apple (AAPL) and Microsoft (MSFT), investors can buy a growthy tech stock and even enjoy a little income on the side.

“63% of the (information technology) sector constituents paid a regular dividend,” says Todd Rosenbluth, Head of ETF & Mutual Fund Research for CFRA. In other words: While tinier tech stocks might have to plow everything into M&A, larger tech stocks that have already reached scale generate lots of cash—which they can shower shareholders with.

But there’s just one catch with these tech dividends. Rosenbluth adds that the sector paid just “1.1%… at the end of the third quarter.”

So, if we put a million bucks into the tech sector and we’re generating a measly $11,000 in annual cash flow. Yikes. I remember “back when” a million dollars used to be a lot of money!

Fortunately, it can be again with the biggest tech dividends. In a minute, we’ll highlight five of the largest payouts in the industry. We’re talking yields up to 10.8%, which means $108,000 annually on that million (which means, once again, a “milly” is a lot of money.)

Of course, we must make sure these dividends are secure. When the business goes bad, the dividend is done. Just ask anyone who owned Nokia (NOK) and BlackBerry (BB). These dinosaurs fell behind the curve and their stock prices were soon (nearly) wiped off the face of the planet:

And for Nokia Shareholders, That Meant Crashing Prices AND Dividends 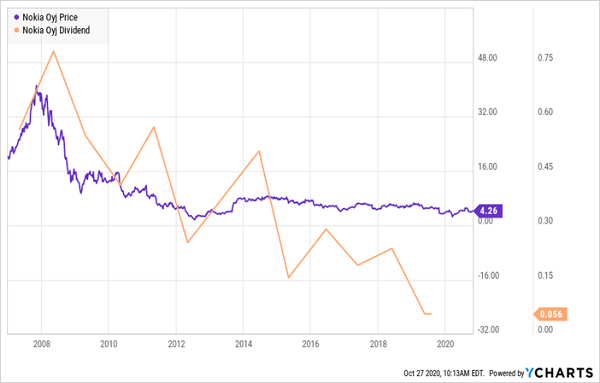 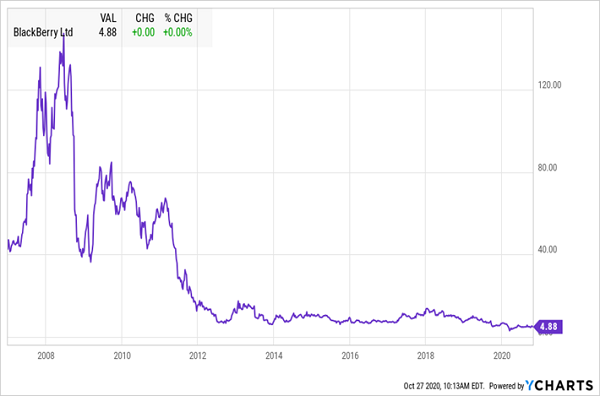 That’s the kind of danger you need to sniff out when you’re talking about tech stocks that are so unloved, they’re yielding like REITs—just like these tech stocks yielding between 5% to 10.8%.

Paper tigers will be folded into airplanes and tossed across the room. But maybe there’s a watch-list-worthy name or two that will earn themselves a potential spot in our retirement portfolios.

Cogent Communications (CCOI) is an internet service provider (ISP) whose roots are in the United States, but whose branches sprawl throughout the world. The company uses 58,000 route miles of intercity fiber and more than 36,400 metro fiber miles to serve more than 200 major markets across North America, Europe and Asia.

This has been, to no one’s surprise, a consistently growing business. Revenues have steadily improved by about 8.5% annually over the past decade; net income hasn’t been as straight a line, but it has been pointing in the right direction.

All that has enabled CCOI to deliver red-hot dividend growth, resulting in a chart that I normally would be giddy over:

This Stock Price Needs to Catch Up to That Dividend … Right? 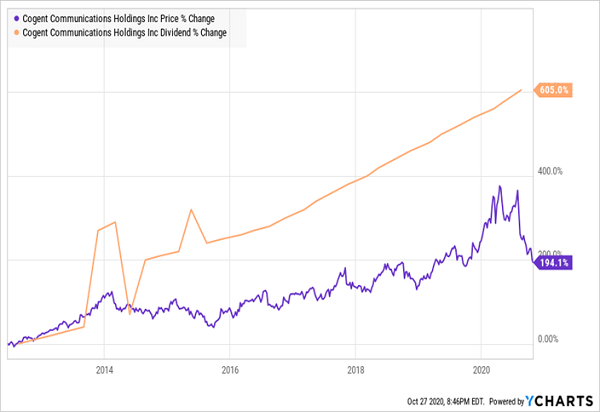 And besides, Cogent is an ISP in the COVID era.

This could be an interesting play, but why not wait for the price to cool off some more and jump in at a bigger yield?

Omnicom (OMC) is a massive global marketing communications firm whose businesses span media planning and buying, public relations, customer relationship management (CRM), advertising and other services. It operates in more than 70 countries not just under the Omnicom brand, but also as DBO, Doyle Dane Bernbach and others.

A 5%-plus yield in any stock is worth a look, doubly so when you’re within tech and communications. But I worry about both near-term struggles and a longer-lasting issue with consistency.

While Omnicom has become more adept at squeezing profits from its operations, those operations haven’t grown in some time. The top line was fixed between $15.0 and $15.5 billion between 2014 and 2018, only to break out of that funk by dipping below the $15 billion line last year.

Only one business line—its healthcare marketing and communications arm—has grown revenues this year. In Q2, revenues dropped 24.7%, while profits plunged by 24.7%. Clients simply aren’t, or can’t, spend as much on advertising and marketing, which has forced Omnicom to pause buybacks and eliminate more than 6,000 workers. The dividend also remains at the same place it did seven quarters ago.

Like with CCOI, it could take some time before OMC springs back to life.

Omnicom (OMC): Growth and Dividends Have Hit a Wall 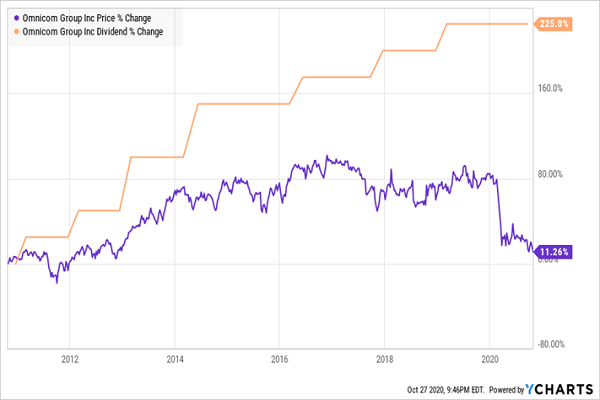 Iron Mountain (IRM) is, as I said earlier this year, is “an old-school REIT trying to go new-school.”

IRM built its business on physical records management and shredding services. It’s exactly what it sounds like: Iron Mountain stores actual paper records for businesses, and it destroys them.

As you’re well aware, however, businesses have been digitizing their operations for literally decades, leading to a slow erosion of this legacy division that’s sure to only shrink as time goes on. To its credit, Iron Mountain saw this writing on the wall, and has expanded into more modern offerings such as data centers, data management and other services, which has helped it grow the top line.

Progress, However, Is Slowing 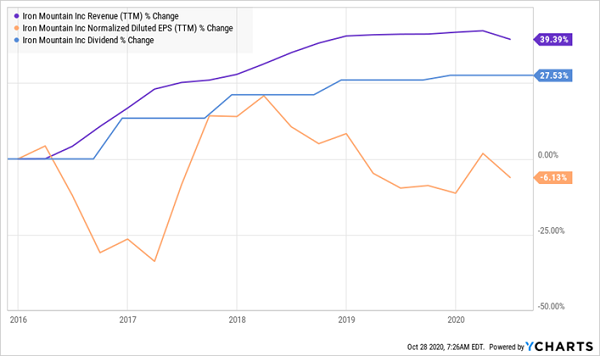 No surprise: Its data center services have really perked up over the past couple of quarters, boasting 7.8% growth in Q2 revenues, and strong bookings across the entire first half of the year.

But the drip, drip, drip of the rest of the company continues. Organic records management slipped marginally and is expected to be off 1% to 1.5% across 2020. Shredding was down 24% (though it did benefit from recycled-paper prices thanks to toilet paper demand). In fact, a fifth of this REIT’s workforce is still being furloughed.

The legacy business is sure to weigh down whatever gains it makes in its 21st-century arms. The dividend is in no immediate danger, but that 9% is all you might realistically expect long-term.

Ireland-based data-storage firm Seagate Technology (STX) is at least doing the kinds of things that should make dividend investors hopeful. It has recently upgraded its dividend—by 3%, but it’s the second straight annual improvement after years of languishing—and authorized $3 billion more in share buybacks.

That, and given Seagate’s positioning as a company providing much-needed solutions such as hybrid and flash drives, as well as enterprise-level drives, would make it seemingly bulletproof as the world increasingly digitizes.

Digital storage has become commoditized. This isn’t, believe it or not, a huge area of growth. Pricing comes and goes in cycles. And it’s just such a cycle that cramped the company’s financials, forcing it to pause its payout growth for several years. 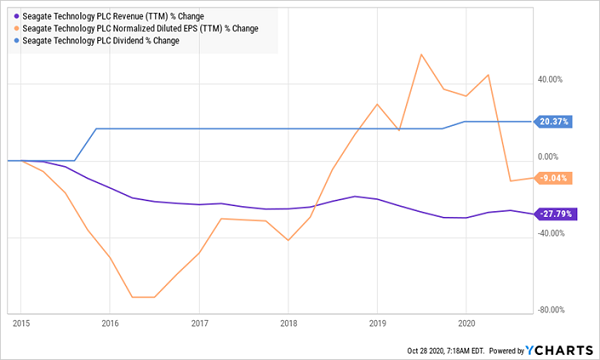 Now, for instance, Seagate does have an opportunity to improve its overall revenues, but worries about gross margins have still weighed on STX shares, which are off 15% this year amid loftier performances for other component-makers, such as chip manufacturers.

STX is a case of great sector, wrong industry.

What’s in a name? Plenty—at least, that’s what the people at the former CenturyLink are hoping.

Lumen Technologies (LUMN) is the new moniker for an old punching bag. It’s frequently marked as a dangerous dividend by the likes of DIVCON, and for good reason.

Profits Are Shrinking, And So Is Its Dividend 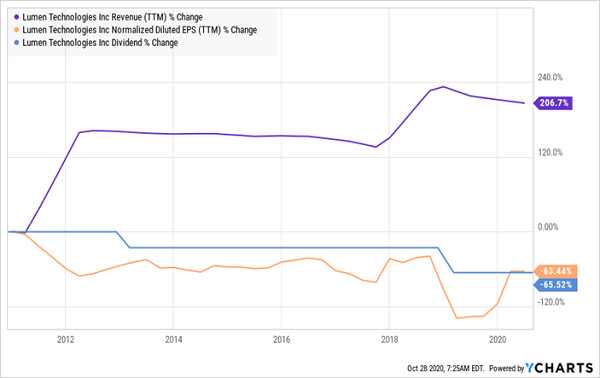 Why on earth would a company that provides internet and cloud solutions be struggling? Well, in the short-term, much like Cogent, business revenues have been hit by COVID, and other factors (such as bad debt and overtime) have weighed on profitability.

But longer term, the problem with LUMN is that its legacy businesses—more than a third of revenues are tied to “obsolete” copper networks, according to Oppenheimer—are slowly bleeding out.

In other words, Lumen is effectively fighting itself for a path to growth. And while the dividend is safe for now, a massive debt pile makes it highly unlikely that the payout gets any sweeter for quite some time.

Even in technology, you start to feel like growth and dividends are a zero-sum game—red-hot stocks that are expanding like crazy deliver next to nothing in income, while big, fat yields are tied to lumbering, pockmarked businesses.

But you can have your cake and eat it too—as the stocks in my “Perfect Income” portfolio have been proving for more than a decade!

That sounds pretty perfect to me.

Let me show you how to get 2x to 4x your current income with this simple, straightforward system. Click here to get a FREE copy of my Perfect Income Portfolio report, including tickers, buy-up-to prices,  and full analyses of each pick … plus a few other bonuses!