The 4% Rule Is Dead: You Can Retire Much Earlier Than You Think

I really hope you’re not following the antiquated “4% rule”—which says you should withdraw 4% of your nest egg (and no more!)—in retirement. Because if you are, you’re staying in the workforce way longer than you need to.

In fact, you may already be financially independent and not even know it!

Today we’re going to look at why this theory could needlessly delay your retirement (in the words of the 4% rule’s author himself!).

I’ll also show you an easy way to grab almost twice as much from your retirement nest egg in every one of your golden years—I’m talking 7% easy here—and go one step further: live on dividends alone. You could do it through just one high-yielding closed-end fund (CEF), which I’ll show you below.

The 4% Rule’s Many Traps Revealed

If you’re one of the millions of people who think you’ll never be able to retire, the 4% rule may be why. That’s because, if you wanted an income stream of $50,000 a year by following this rule, you need to save $1,250,000. This is where the financial industry’s insistence that we need a million bucks to retire comes from—and why many people simply give up.

Retirement Is Expensive With the 4% Rule

The rule’s creator, William Bengen, upped the limit to 4.5% in 2006, saying if you take that much out, you have virtually no chance of running out of money in retirement.

Even so, most advisors held to the 4% rule—even though its author no longer recommended it. Now Bengen has changed his thinking again.

“In fact, the average SAFEMAX [his term for the safe withdrawal rate] for all retirees for the years 1926 to 1990 was 7%—much higher than the ‘worst case’ scenario of 4.5%,” he wrote in Financial Advisor magazine. “It seemed to me, therefore, that it would be useful to have a method that prescribed high withdrawal rates when the right conditions existed.”

That’s a massive shift—it would let us shave seven years off our time in the workforce. 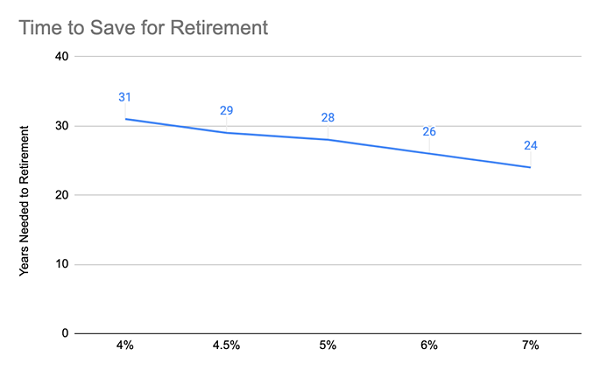 How to Withdraw 7% Safely

For his initial calculations, Bengen used a conservative portfolio invested 30% in the S&P 500, 20% in small-cap stocks and 50% in Treasury bonds.

If we construct that portfolio using the SPDR S&P 500 ETF Trust (SPY), iShares Russell 2000 ETF (IWM) and iShares 20+ Year Treasury Bond ETF (TLT), we see that it has performed well over the last 18 years, since ETFs tracking these three assets have been available: 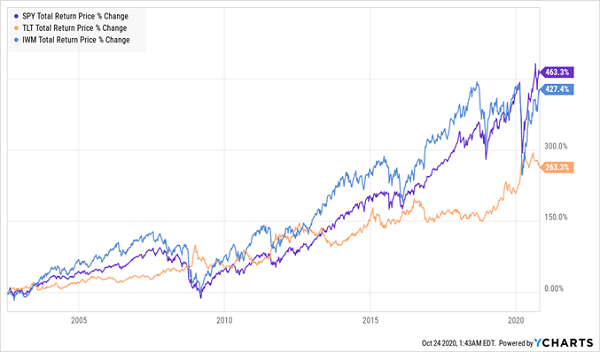 That breaks out to a 7.3% annualized return—not bad.

But there are hundreds of CEFs that have crushed this return and given their shareholders some nice diversification, too. Take, for instance, the Liberty All-Star Growth Fund (ASG), which crushed all three of these ETFs over the same period. 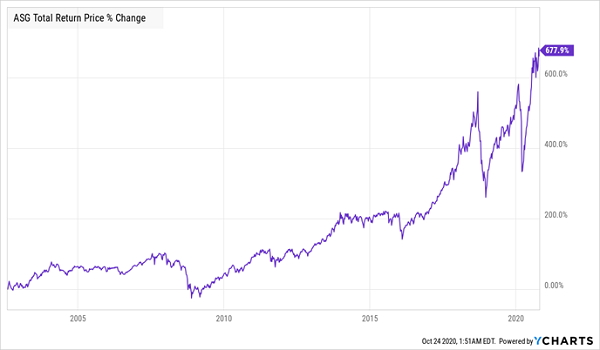 With ASG’s 11.2% annualized return, you would have been able to take out 7% annually over this period and seen your savings grow, too.

Plus there’s the convenience of ASG’s income stream; the fund yields 6.8% today, just shy of that 7% withdrawal rate. But ASG has been quickly growing its payout over the last decade—if you’d bought 10 years ago, you’d now be getting a 13.4% yield on your original cost. Look at the chart below (that big spike is a special dividend ASG announced in late 2015): 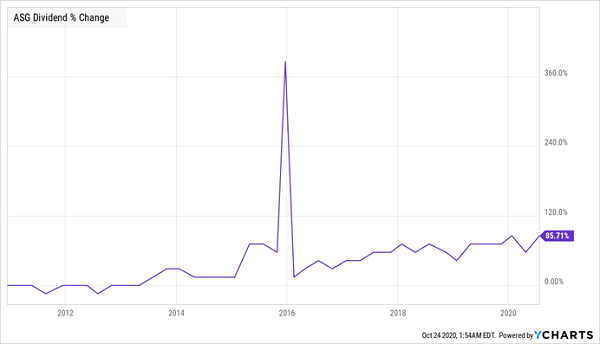 The bottom line? Forget the 4% rule—even its author thinks it’s obsolete! Now is the time to rethink retirement with a more optimistic, and realistic, goal.

These “Retirement-Ready” CEFs Make Money 98.4% of the Time

Here’s something else I think you’ll love: by picking a well-established CEF like ASG, you’re actually making your retirement portfolio safer—and not by a little bit, either!

That’s right: this group of incredible investments made money 98.4% of the time! And because these statistics include dividends, you’re getting much of your return IN CASH with these CEFs.

The best news is, my 5 top CEFs to buy now yield in outsized 8.2% today, and thanks to their bizarre discounts, they’re primed to jump 20%+ in the next 12 months.

Don’t miss your chance to pick up these 5 “safety-first” funds while they’re cheap. Get everything you need to know—names, tickers, complete dividend histories and more—right now.