Think it’s time to sell – or avoid – tax-advantaged municipal bonds ahead of the upcoming tax battle?

Think again. There are several compelling reasons why muni bonds are still buys for most income-focused investors.

First, the top federal tax bracket will still be a hefty 35%. Which means, if you’re a top earner, munis will still boost your yield by more than one-third.

No matter what tax plan is approved, municipal bonds will continue to be tax-free at the federal level. The GOP isn’t touching the federal income tax exemption for municipal bonds, which means win or lose, Uncle Sam won’t touch that income (which means tax-equivalent yields up to 9.6%, which we’ll discuss shortly, will still be in play).

Let’s consider today’s tax equivalence chart, which will remain relatively untouched as the top tax rate remains at 35% or more: 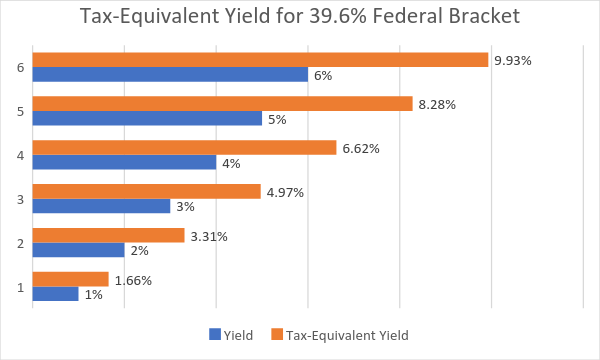 Savvy income investors will capitalize on “headline selling” in the weeks and months ahead to purchase munis at a discount. Here are five funds to keep an eye on, paying tax-equivalent yields between 6.6% and 9.6%.

The VanEck Vectors High Yield Municipal Index ETF (HYD) is one of the better plays for investors who want simple, cheap exposure to municipal bonds without sacrificing too much in income.

See, most municipal bond ETFs tend to yield somewhere around 2%, with even the best of those topping out around 3% – which is good, especially considering that once you factor in the federal tax break, you’re talking about nearly 5% in so-called “tax-equivalent yield.” Still, HYD is one of the few ETFs actually dedicated to high muni yield, and at the moment it doles out a full 4%, or just more than 6.6% on a tax-equivalent basis.

The HYD is a broad fund of more than 1,500 holdings, with the heaviest weights shouldered by municipal bonds from California (16.5%), Illinois (12%) and Ohio (8.2%). The high yield part of this comes from a high average portfolio maturity of about 20 years, as well as low credit quality – just less than a third of the fund’s bonds are rated investment-graded, with 47% in “junk” and 22% not even rated.

Speaking of California, investors can double up on their tax exemptions by specifically targeting a fund that exclusively holds municipal bonds from the state they live in. That exemption can be particularly attractive when the tax burden is heavy – take California, where those who earn a million dollars are more are slapped with a 13.3% rate! But it’s not just hard on the “1%” – those making between $51,130 and $263,221.99 are giving back 9.3%.

Enter the Eaton Vance CA Municipal Income Trust (CEV), a closed-end fund. CEFs are similar to ETFs, but have a set number of shares on the market (which makes them trade in a range around their net asset value), and typically able to use leverage to generate higher yields and returns.

CEV holds more than 100 municipal bonds from the state of California that include entities such as the Anaheim Public Financing Authority, University of California and Sweetwater Union High School District.

This CEF generates a nice-sounding 3.8% dividend yield – but at its best, if you’re in the 39.6% federal bracket and 13.3% state bracket, you can instead expect to enjoy a whopping 7.3% tax-equivalent yield.

Nuveen Municipal Credit Income Fund (NZF) is one of several broad-based closed-end funds that invest in a basket of municipal bonds from several states. So you’re not going to have nearly the single-state friendliness of CEV, but you do get a much better headline yield that translates into a 9.6% tax-equivalent yield after backing out the federal exemption.

By buying NZF, you’re gaining exposure to a pretty diverse basket of nearly 900 holdings – one particularly concentrated in Illinois (18.1%), California (13.4%) and Texas (10.1%). It’s also a decently secure fund, with almost half of its portfolio invested in bonds rated A or above, and another 23% in BBB, which still is investment-grade.

MFS High Income Municipal Trust (CXE) is another high-yield play that delivers more than 9% in income once you back out the tax-free nature of its holdings.

It’s also a good example of the use of leverage in CEFs to get the job done, with this particular fund invested a whopping 156.48% in municipal bonds, not to mention room for another 18.63% in “other.”

How can something be invested more than 100%?

Well, a CEF can use debt, issue preferred shares and use other types of leverage to invest even more in the assets it targets. The idea here is that it can earn more from those investments than it costs to raise the capital, resulting in a net win for CEF and investor alike. Naturally, that adds more risk, so if you’re risk-averse, check under the hood to make sure you’re not taking a chance with a levered fund that’s also taking moonshots in its holdings.

Good news: CXE is acting responsibly with its leverage, with two-thirds of its assets plunked into bonds rated BBB or better, and another 13% in BB – the highest investment grade for “junk.”

What I love about all these funds is they show just how performance-packed municipal bonds can be. Just check out the last three years against the broad iShares Core Aggregate Bond ETF (AGG). 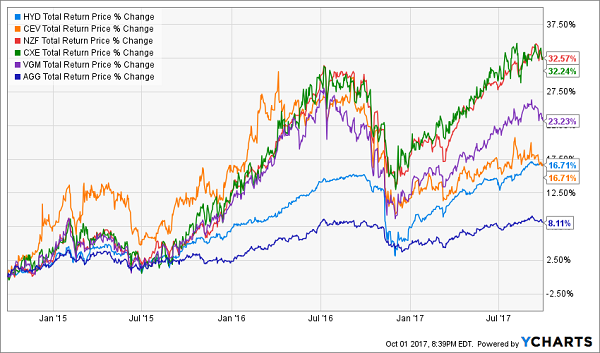 And what I love about the Invesco Trust for Investment Grade Municipals (VGM) is that it shows you don’t have to buckle for high yield.

VGM holds a basket of 500-plus bonds, with the Lone Star State taking top billing at 13.4% of the fund, followed by Illinois and California at nearly 11% each. It’s also well spread out by sector, holding everything from utility to hospital to airport to tollroad bonds.

But the outstanding feature of this fund is its grade-A quality – literally! Nearly three-quarters of VGM’s holdings are rated A or higher, and almost 90% of the debt in this CEF are investment-grade.

And yet, thanks to the tax-free nature of municipals – as well as mostly longer-term maturities and some leverage magic – VGM is able to dole out a whopping 9%-plus in distributions on an annual basis, making this an attractive way to pull in fixed income that Uncle Sam won’t touch.

The beauty of these types of secure high yields is that you can “ride out” any price fluctuations, because when you live off dividend income alone you never have to actually sell anything.

That’s why I recommend a full “no withdrawal” portfolio of secure 8% payers. There are actually safe funds and stocks that pay this much. They don’t get a lot of coverage in the mainstream financial media because most investors are distracted by big blue chip names. Problem is, this popularity comes at a price – and you can’t live off dividend income alone if you’re only banking 2% or 3% in yield.

The solution? Stealth plays like closed-end funds, preferred shares and recession-proof REITs. You can build a safe, diversified portfolio from these types of issues that pays 8% – which means you’ll never have to lose sleep over price gyrations again.

Want to learn more – and buy a few high paying shares? Click here and I’ll share everything about my “no withdrawal” strategy, including the names and tickers of the stocks and funds that you can buy for secure 8% yields.