Donald Trump’s win has done something extraordinary to the financial sector. Just look at this one-month chart for the Financial Select Sector SPDR ETF (XLF): 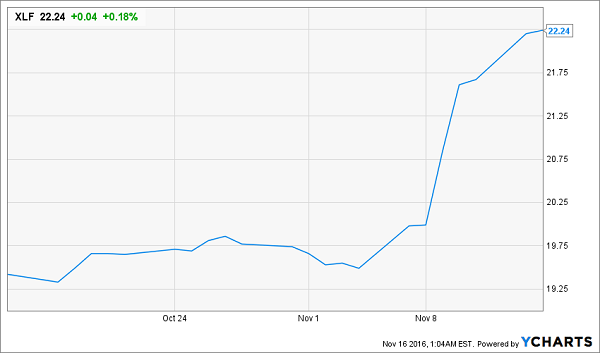 This is unexpected on two levels.

First, of course, Trump’s very election came as a shock to many. Second, there was no shortage of people saying stocks would tank if the real estate mogul won. Meantime, not only has the market reached new heights since November 9 but financials have gone from one of the worst-performing sectors to one of the best—almost overnight.

The reasons are simple. First, Trump has promised to repeal the financial reforms brought in under the 2010 Dodd-Frank Act, which have limited banks’ activities, and their growth potential along with them. Second, Trump’s fiscal-stimulus and tax-cut plans could mean an end to the low-inflation era we’ve seen since the financial crisis.

Investors have blindly taken this as a reason to buy bank stocks, but you shouldn’t follow the herd.

That’s because there’s a long list of things we still don’t know, including whether Trump’s stimulus plan will actually happen and where the money to pay for it will come from. Even then, we’re still not sure if this new spending will actually kickstart inflation.

We also don’t know if he really will repeal Dodd-Frank or if he’ll place new restrictions on banks, for that matter. Finally, Trump’s plans to limit international trade could make it harder for Wall Street to find growth beyond the US at a time when international markets have become increasingly important for investment banks.

But, in its customary fashion, the market has plowed ahead despite these risks. Morgan Stanley (MS), the top performer among the major banks, is up 23.7% year-to-date! JPMorgan Chase & Co. (JPM), Bank of America (BAC) and Goldman Sachs (GS) are also up sharply: 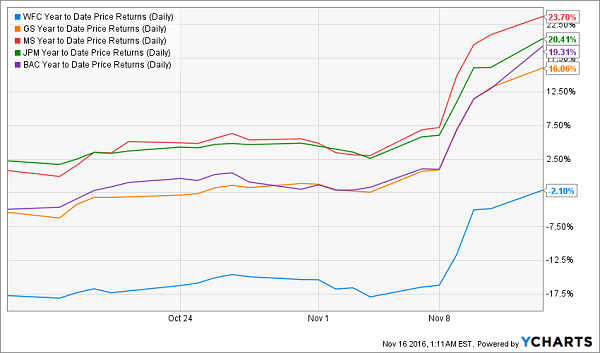 Notice that only Wells Fargo is down, but its 2.1% loss is nothing compared to what it was just a few days ago. That may make Wells look like an attractive buy, but it isn’t. When we compare these firms’ prices to their book values, we see that WFC is the most overpriced of the bunch:

WFC Is No Bargain 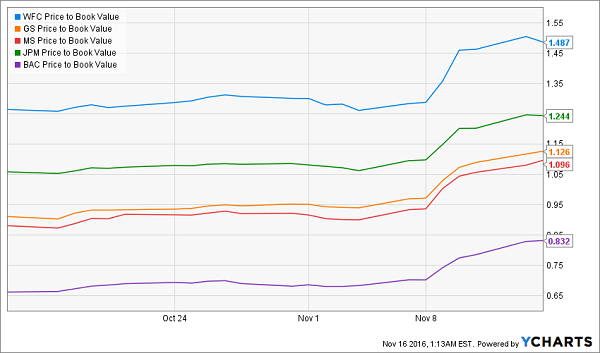 Value investors know that you don’t want to pay more for assets than they are intrinsically worth, unless management adds enough value to offset the premium. Considering Wells Fargo’s recent banking scandal—which the public hasn’t forgotten yet—I’m not confident that WFC’s management is adding enough extra value to justify a 49% premium to the value of the company’s assets.

From this metric, Bank of America looks like the cheapest stock, but a quick look at all five banks’ revenue growth quickly reveals why BAC is on sale: 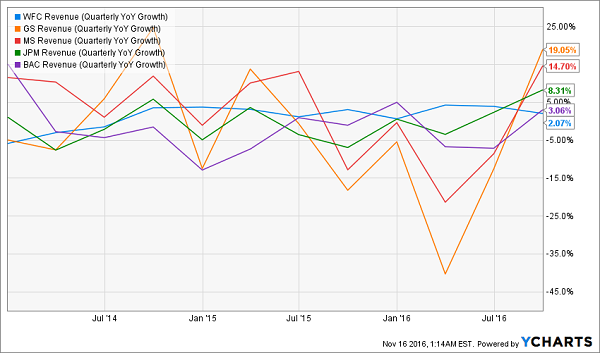 BAC’s revenue growth is slightly better than Wells Fargo’s but worse than the rest and far lower than the 15% revenue growth the bank had back in 2014. So we’re not buying a company that’s growing in any impressive way. With this metric, it looks like Goldman Sachs is our best bet.

Yet look at how GS’s revenue growth was a stunning negative 40% just a couple quarters ago. When we look at annual revenue growth, GS’s is actually shrinking: 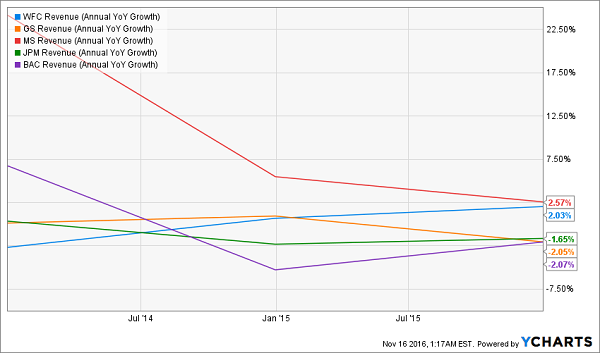 Despite that, GS’s fourth-quarter revenue growth will probably be impressive, thanks to easy comps from the end of last year and rising interest rates helping boost the bank’s bottom line. Recent Trump-based volatility should increase trading income, too.

But those are short-term reprieves from a longer secular trend that looks bad for everyone. While Morgan Stanley’s revenue does show some annual growth, it’s still quite weak. And that weak growth isn’t translating into a big boost to net income: 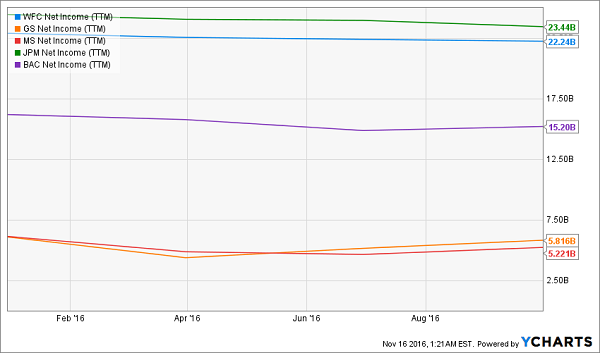 Flat lines across the board, and MS’s net income has fallen slightly over the last year.

While it’s true that higher interest rates could benefit the banks in the short term and deregulation could help them expand their operations, that’s already all priced in, despite a lack of certainty around Trump’s plans. If he reverses his stance—as he recently did on repealing Obamacare in its entirety—these banks will not enjoy the boosts the market is now betting on.

A Better Way to Buy the Banks

This doesn’t mean I dislike financials as an industry, but I think there are better ways to play them. Corporate bonds, for example, have fallen steeply recently on hiked inflation fears, and that is almost fully priced in, making financial firms’ bonds an interesting play. Additionally, financial companies love preferred stocks, and these high-yielding assets offer some interesting opportunities for investors, too.

These markets are much harder to access, but luckily we can get to them through ETFs. The PowerShares Preferred ETF (PGX) and iShares US Preferred Stock ETF (PFF) provide exposure to preferreds, and they’ve recently gone on sale: 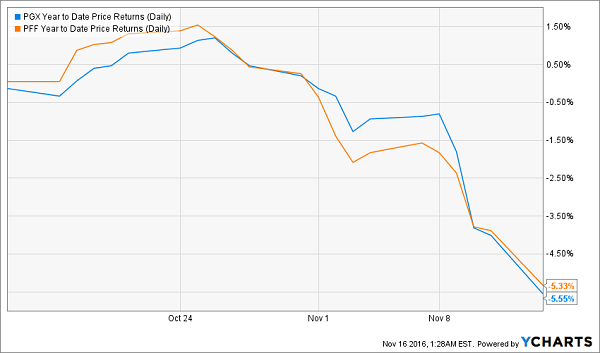 Again, interest rate worries are the problem. Both funds are getting hurt as investors fear higher interest rates will drive investors away from preferreds. But this fear is now almost fully priced in, making preferred funds worth considering.

Also, these funds offer the exact same sector exposure: the majority of their holdings are in financial firms. Here are PGX’s primary holdings:

Financial Firms All Around 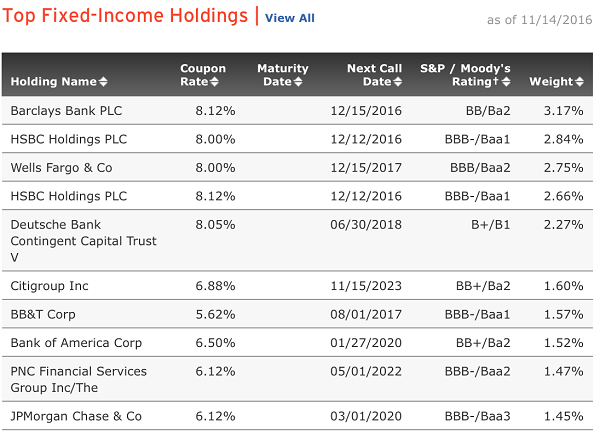 So if we want to bet on Trump boosting financials without paying for that boost, which is already priced into common shares, we can buy this fund and get the same exposure. We’re also getting a 5.9% dividend yield, which is far higher than these firms’ common stocks pay.

The same goes for PFF, which is heavily exposed to financials: 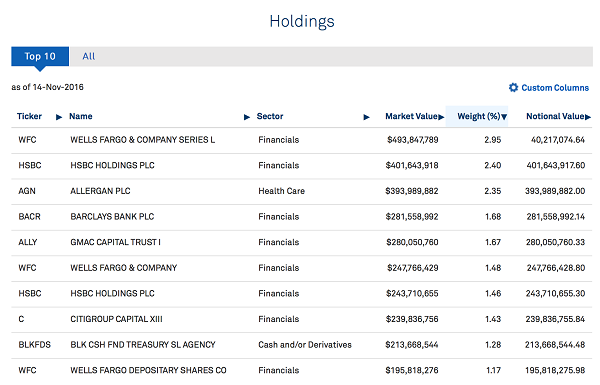 Plus, the fund pays a 6.1% dividend yield, so we’ll collect an outsized income stream as we wait for our bet on the financial sector to pay off.

While PGX and PFF look like decent post-election buys, they still hold companies I wouldn’t touch with a 10-foot pole (Allergan, for example, has been plagued by accounting problems—a huge red flag).

That’s why we recommend another preferred-stock fund that’s devoid of risky holdings like Allergan. Our favorite preferred fund also trades at a hefty discount to its net asset value  and boasts a 7.8% yield, much higher than you’ll get from either PGX or PFF.

These three advantages give you a crucial margin of safety during periods of market volatility, which we’ll almost certainly see under President Trump.

That’s why we’ve made this often-overlooked fund a key part of my “No-Withdrawal” retirement portfolio. As the name suggests, it’s set up to generate enough income for you to live on dividends alone.

Best of all, you won’t need a seven-figure nest egg to do it. With just a $500,000 investment, this powerful set of investments will throw off a $40,000 income stream that will rise like clockwork year in and year out.

Click here to get the full story, the name of our favorite preferred fund and 5 other bargain investments yielding 7.7% and up now.