3 Dividend Stocks to Buy Now and Hold for 20 Years

Forget the pundits—they totally blew the call on this election. And I sure hope you didn’t take their stock advice, either.

Ahead of the vote, one economics professor said the market would drop 7% if Trump won. Another analyst said you should go to cash “if you’re not already there.”

I could go on.

If you followed that advice, you’ve missed a 2.1% rise in the S&P 500 since Election Day. It’s worse if you were overweight financials, as the sector has been on an absolute tear, with the iShares US Financials ETF (IYF) surging 7.0%.

But not surprising, as banks will benefit most from higher interest rates—and a selloff in the bond market has pushed the yield on the 10-year Treasury to around 2.25% from 1.87% on November 8. 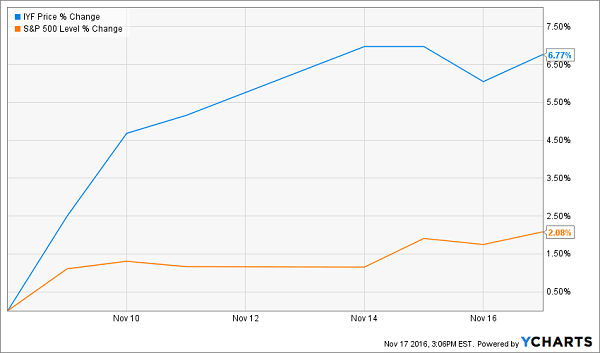 Which begs the question: what the heck do you do with your portfolio now?

Let me give you an answer: buy more stocks, particularly companies that pay—and better yet grow—their dividends, including the three I’ll name in a moment.

But instead doing it in one fell swoop, consider using one of my favorite strategies: a “boring” go-slow approach called dollar-cost averaging.

It’s perfect for volatile markets like today’s because it’s the exact opposite of trying to time the market based on the headlines. You simply commit to buying a fixed dollar amount of a particular investment on a set schedule.

Here’s a real-world example: let’s say you decided to invest in insurer Travelers Companies (TRV), one of the three stocks I recommend buying now and holding for the next two decades, back in 2006. And let’s say you bought $5,000 worth of TRV on the last trading day of the year over the following 10 years.

But thanks to the periodic nature of your purchases, your average price would have been just $70.05. That’s a big discount to the stock’s average price of $84.08 during that time and far below today’s price of $111.40. 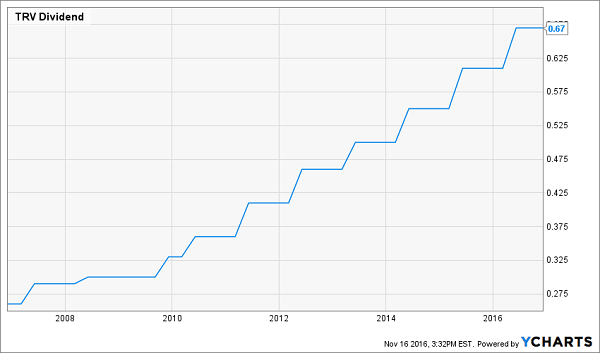 Sounds easy, right? You can make it even easier by signing up for a company’s dividend reinvestment plan (DRIP), which you can do through your discount broker.

DRIPs are a powerful (yet underused) tool that lets you convert your dividend income into additional shares—and fractions of shares—commission-free.

Which brings me back to Travelers, a provider of car, home and business insurance that’s been around since 1853.

Insurance stocks also jumped following Trump’s win, but unlike the big banks—with the exception of scandal-plagued Wells Fargo (WFC)—TRV is still down year-to-date. 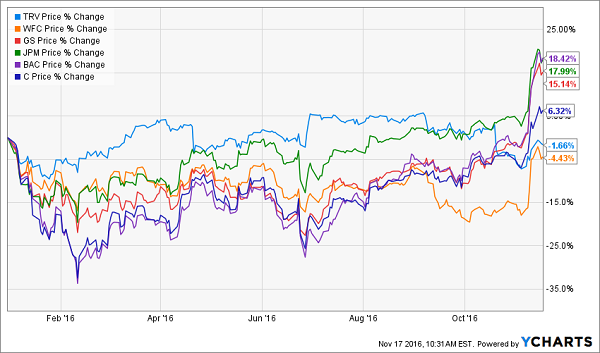 That adds up to an excellent entry point on a top-quality company that stands to gain from rising rates because it invests its clients’ premiums in interest-bearing securities.

Higher income (and the fact that Travelers pays out just 26% of its earnings as dividends) means stronger dividend growth and share buybacks, both of which help drive the stock higher in a rising market and throw a floor under it in a downturn.

I hope you snapped up Delta Air Lines (DAL) when I recommended it on September 26. If so, you’re sitting on a 27% gain in less than two months! 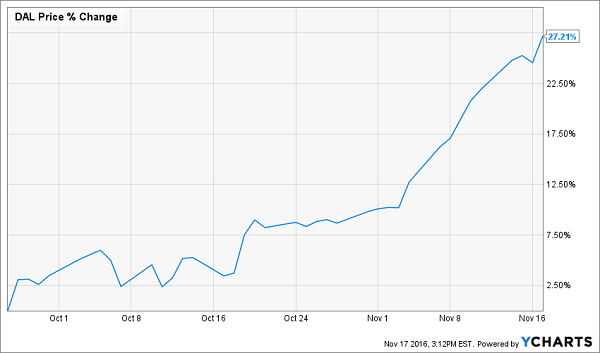 If not, don’t worry. You’re not too late. Because despite DAL’s climb, it’s still down 4.5% year-to-date and sports a ridiculously low forward P/E ratio of 8.7.

The move caught the market by surprise, especially since Buffett has called airlines a “death trap” for investors in the past.

It shouldn’t have. In the past dozen years, the airline business has been whittled down to just four domestic carriers from 12. That’s put an end to cutthroat price wars and thrown up a high barrier to entry, something Buffett’s always looking out for.

Still leery? Consider this: even though many people avoid airline stocks because they see them as too volatile, that’s not the case with DAL: the stock’s beta rating is 0.89, meaning it’s historically been 11% less volatile than the overall market.

I expect DAL to catch even more lift as it flies onto income investors’ radar. The stock yields just 1.7% today, but the company has boosted its quarterly payout by 237% since it started paying dividends in 2013.

Today, DAL pays out a miniscule 10% of its earnings as dividends, so there’s lots of room for more growth and buybacks: in the past three years, it’s slashed the number of shares outstanding by 13.5%. 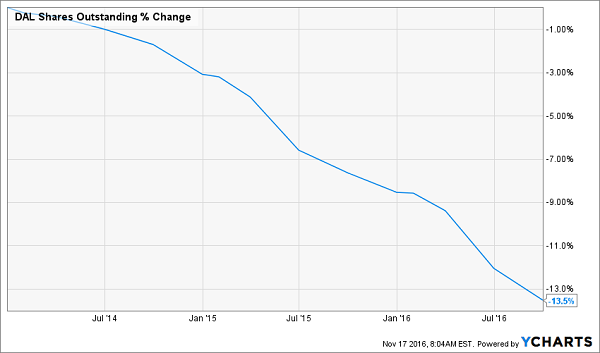 BPY: Set It and Forget It

The final buy-and-hold pick I have for you today is Brookfield Property Partners (BPY), which boasts a 5.4% dividend yield and trades at a ridiculously low 72% of book value (or what it would be worth if it were broken up and sold off today).

The company (technically a partnership, not a real estate investment trust) also gives you a nice mix of high yield and strong dividend growth: since it was spun off from Brookfield Asset Management (BAM) in 2014, BPY has hiked its quarterly payout twice, for a total increase of 12.0%. That’s in keeping with management’s stated goal of hiking by 5% to 8% annually. 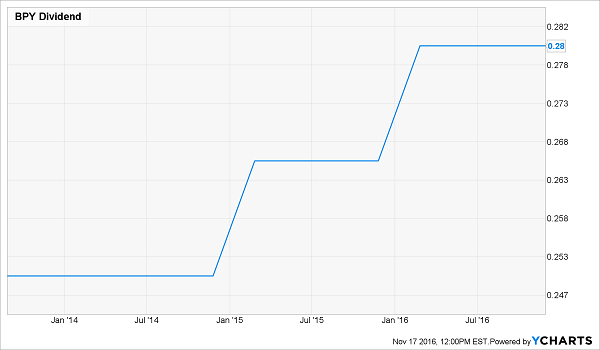 Those increases should be well supported by the 8% to 11% increase in funds from operations (FFO; a better measure of the partnership’s performance than earnings) per year management is targeting, thanks to rising rents, low occupancy rates and the 9 million square feet BPY has in development.

In the third quarter, Brookfield paid out $0.28 in dividends, or 85% of its $0.33 in FFO. That’s a reasonable payout ratio for the partnership, and it’s down slightly from a year earlier.

Brookfield will likely announce its next hike in early February. With the stock down year-to-date and since Election Day on overhyped interest rate fears, we’re nicely set up to buy in.

How to Collect $40,000 in Income—Starting Today

Brookfield, Delta and Travelers Companies are great post-election buys, but even if you buy all three now, it will still be a long time before you’ll be pocketing an 8% yield from your initial investment in any one of them.

As I showed you above, if you’d invested $500,000 in Travelers Companies 10 years ago, you’d still only be yielding around 5% on your initial buy. That’s just $25,000 a year in income—less than your local Starbucks barista makes!

And by investing so much in a single stock—even a top-quality one like Travelers—you’re exposing yourself to a lot of volatility. Just look at how TRV’s share price has whipsawed this year alone: 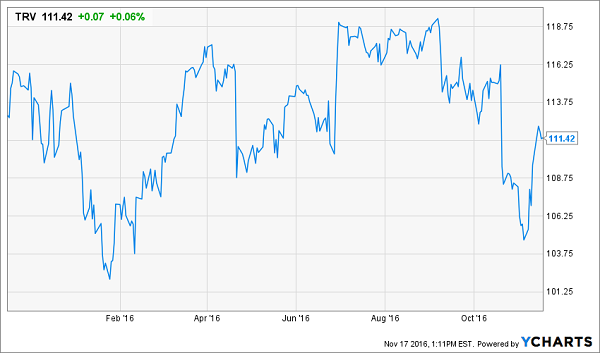 That’s why I built my “No-Withdrawal” retirement portfolio. It’s designed to let you check out of the workforce and live on dividends alone, without ever having to touch your capital!

It’s backstopped by a highly diversified set of investments throwing off high, safe yields of 7.7%, 8.7% and even 11.0%! In all, this remarkable portfolio yields a reliable 8%, today, so a $500,000 investment would immediately kickstart a $40,000 income stream.

Obviously, the more money you have, the better. But here’s the upshot: with an income stream like that, you’re free from ever having to worry about stock prices, because when your dividends are safe, who cares if your stock prices swing up and down on any given day?

I can’t wait to show you the nuts and bolts of my strategy and the 6 powerful investments it’s based on. Simply click here and I’ll give you all the details and reveal the names, ticker symbols and buy prices of these high-income wonders.