These 6%+ Yielders Are a Screaming Bargain

If you’ve invested in municipal bonds lately, you may be coming down with a serious case of buyer’s remorse.

But you shouldn’t, as I’ll explain in a moment. In fact, now is the perfect time to double down and buy more of these high-yielding, ultra-stable investments.

First, let’s look at why “munis” have fallen off a cliff, setting up an excellent buying opportunity for you and me.

“Off a cliff” is no exaggeration. Take a look at what’s happened to the five biggest muni-bond ETFs in the past month: 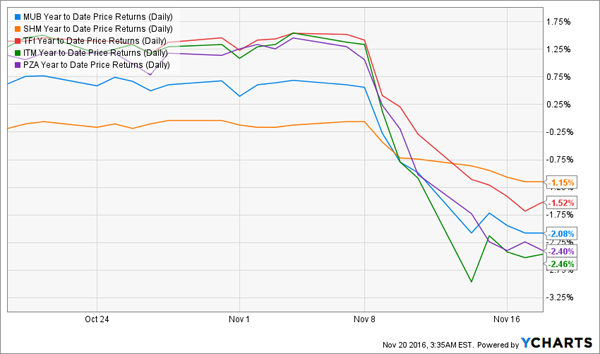 When investments as stable as these put on a drop like that, you’d expect, say, a looming global financial crisis.

You could argue that Trump might bring us precisely that, but this sentiment runs counter to the jump in financial stocks—and the strength of stocks broadly—we’ve seen in the past few weeks, as well as the investment banks’ forecasts for rising GDP growth and inflation.

So forget Trump. He’s not the one sideswiping municipal bonds.

The fact that all of these funds are falling at the same time shows a herd mentality that’s causing one very crowded trade—and that’s exactly why I recommend holding on to your muni bonds now—and considering buying more.

To understand why, we need to take a look at the sellers’ logic. It goes something like this:

On the surface, this logic makes sense. But it doesn’t take long to unravel when you take a look below the surface.

Let’s do just that, starting with the five funds in the chart above.

They all have similar objectives: to build a diversified portfolio of municipal bonds that gives investors a tax-free income stream (more on that in a moment).

The key thing to note with all of these funds is that the duration of the municipal bonds they buy varies widely. SHM, for example, holds short-term bonds, which, by definition, will lose less value and face less risk from rising interest rates, so this fund should have fallen the least—and it has, just 1.2% year-to-date.

But that would also mean ITM should have the second-lowest decline—yet it’s down 2.5%, more than any of the other funds. If the selloff is about fears of rising interest rates and declining values for longer-term bonds, why should intermediate bonds perform worse than funds with long-term bonds in them?

The truth is, default rates for municipal bonds have not risen, the quality of municipal issues has not worsened and the chances of these bonds being repaid in full remains almost 100%.

So there’s no reason to believe that the iShares Municipal Bond ETF, for example, will need to aggressively churn its portfolio to sustain its payout (all of these funds have relatively low churn rates, meaning fund managers sell their assets relatively infrequently). There’s even less reason for the SPDR Nuveen Barclays Short Term Municipal Bond ETF to make such a move.

That means, by extension, there’s little reason for us to sell these funds right now.

There is, however, a much bigger reason to keep these funds … and buy more. To understand why, let’s take a longer-term view. 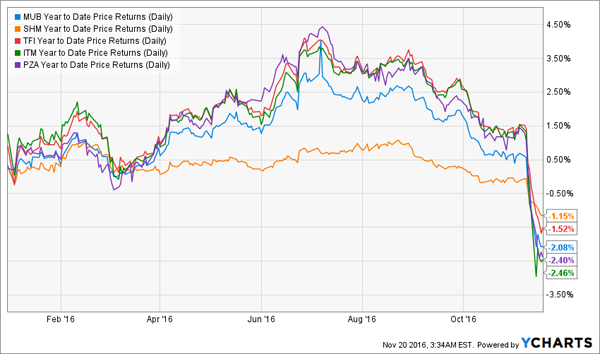 Like any other investment, munis have up and down trends. As you can see from the chart above, when they rise, they do so slowly and with slight corrections and re-corrections. But when they fall, they tend to fall hard and stay low for longer periods, with little correction back upwards.

This doesn’t mean we can predict when the current slump will end, but it does signal that it’s driven more by psychology than fundamentals.

That means we need to turn contrarian—and run toward the thing that everyone is running away from. It also means doing the opposite for asset classes that are looking a bit frothy after Trump’s surprise win.

The Sector You Should Be Worried About Now

Which brings me to financials, which may seem appealing right now because of the possibility that Trump’s promise of deregulation will bring Wall Street back to the heady days of its past. But that doesn’t mean we should buy the Financials Sector SPDR (XLF) when the fund is up 14.5% year-to-date and its price-to-book value is nearing 1.5.

That last point is key. Why do investors ever pay a premium to the market value of a company’s assets? If the company can add value to those assets, such a move makes sense. And the big financial firms are certainly capable of doing that, by using existing relationships to make deals and drive revenues higher, for example.

But they can also hurt the value of their assets by misbehaving and causing disasters like the fake accounts scandal at Wells Fargo (WFC).

This doesn’t mean we should steer clear of financials for good; it just means we need to handle them with caution and make sure we’ve got a very solid reason to buy at a premium.

In this sense, financials are the exact opposite of what municipal bonds should be. They should be relatively commoditized, meaning it doesn’t matter if the bond was issued by a state nearby or a country thousands of miles away. You want to believe the underwriters, issuers and market makers have enough transparency and limitations to make fraud and mismanagement almost impossible.

This doesn’t mean municipalities don’t misappropriate funds and aren’t corrupt. But it does mean that bad behavior doesn’t end up impacting bondholders, who invariably get their money back, even in the ultra-rare case of a default or restructuring. The legal tenets of municipal bonds almost always guarantee this.

This, in fact, is why historically municipal bond prices have lacked volatility. To illustrate this point, let’s compare municipal bond funds to financials over the past year:

A Smooth Ride … Versus Heart-Stopping Ups and Downs 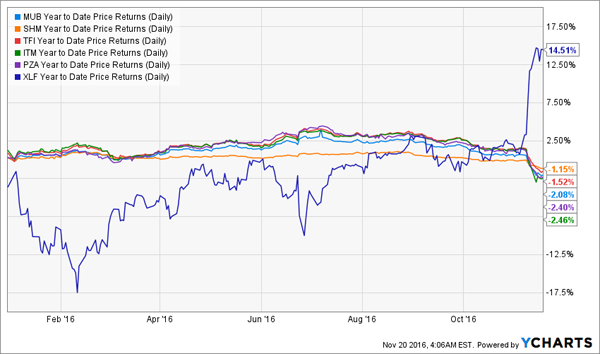 This shows how municipal bonds can add ballast to your portfolio because their returns fall less steeply and rise less sharply than most sectors of the stock market, including financials.

A 6% tax-free income stream in a world of 2% inflation is like a dream come true and would be tough to replicate in our current low-interest-rate reality. Even if Trump succeeds in bringing us higher inflation, higher interest rates on Treasuries and higher returns on assets, you’d still be hard pressed to replicate a 6% tax-free income stream elsewhere, especially at the risk level munis offer.

A 6-Stock Portfolio That Generates a Safe $40,000 Income Stream

There’s no doubt municipal bonds are stable and throw off a rising stream of income, but they’re not the only game in town if you’re looking for safe investments that yield 6.0%+ … even in today’s low interest rate world.

We’ve zeroed in on 6 screaming buys from two other overlooked corners of the market that today yield an eye-popping 8.0%!

To put that in dollars and cents, a $500,000 investment today would hand you a $40,000 annual income stream, starting now! If you’re near retirement, that could let you leave the workforce earlier—or set aside enough cash to leave a lasting legacy for your kids (or grandkids).

That’s why we’ve named this powerful collection of investments the “No-Withdrawal” portfolio: because it lets you live on dividend checks alone, without having to sell a single stock … potentially for the rest of your life!

I can’t wait to show you these 6 incredible investments and the nuts and bolts of our strategy. Simply click here to learn how easy it is to start collecting a recession-proof 8.0% income stream today.