We retirees and soon-to-be retirees have a dilemma. The traditional pension is just about gone. Social Security won’t support the lifestyle most of us want. We are left to our own devices.

But even if we do build up a fat balance in a 401(k) or other company retirement plan, how do we make it last? Especially when the bank pays “zero point nothing.” Today, you can’t find anything that pays significant “interest.”

This is becoming a crisis in the US. We are told that stocks provide the best returns over the long term, but retirees need income now. Most retirement investors prefer dividend income to long-term gains, but yields haven’t been this low in decades! The S&P 500 pays a measly 2% or so today. If you have a million-dollar portfolio, that’s a lousy $20,000 per year in income, or $385 a week. That’s no retirement.

Now some dividend-income investors protest, “But I don’t own the S&P 500 index for income. I choose the best companies in the index, the ones whose dividends have gone up and up. The dividend aristocrats.” But are they true monarchs or mere pretenders to the throne.

The problem with growing your dividends for a minimum of 25 consecutive years is that’s a lot of time for your own profit growth to slow down. That means many of your dividend increases are cutting even further into your earnings. You don’t want to break the bank, so your hikes shrink over time–a couple percent here, a couple percent there, just to keep your Aristocrat lapel pin.

I’ll let you in on a secret: Sometimes, the best place to make your dividend-growth play is on the ground floor, in companies that have really only begun to scratch the surface. In fact, two of the picks I’m about to show you have been paying dividends for less than five years.

Let me show you the difference between some of the largest blue-chip Dividend Aristocrats and my plucky group of five turbo-charged dividend growers:

These Blue Chips Are Crawling to the Finish Line 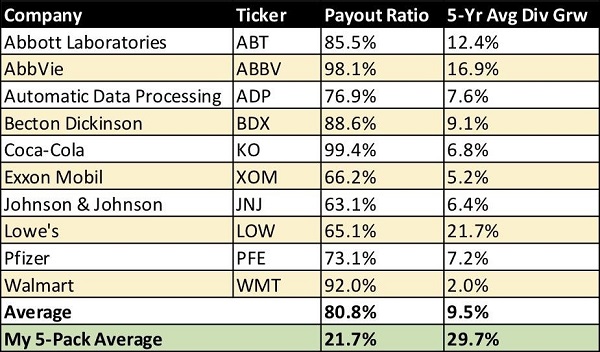 The 9.5% growth rate above is nice but it’s not sustainable. These firms are already paying 80% of their profits as payouts! This stat is great for the last five years, but awful for the next five–and that’s what we care about.

So let’s look past these paupers for lesser-known bargains that are primed to double their over the next five years. Some will double within three!

How is this possible? These five stocks are only paying 20% of their earnings as dividends, which means they could multiply their payouts by 2X, 3X or even 4X today.

They won’t do it overnight however. These firms will bump their dividends by 15%, 20% and even 25% or more per year. Which means their stock prices will probably follow, and investors who buy today will double their money with these safe dividends.

Ally Financial (ALLY) as we currently know it has only been around since 2010, but the company has roots going all the way back to 1919 as General Motors Acceptance Corporation (GMAC) – the financing-providing arm of automaker General Motors (GM).

The company still has extensive automotive operations, providing financing for more than 4 million customers across 18,000 dealerships. But Ally also offers online banking, vehicle insurance and credit cards, among other products. It also re-entered the mortgage business in 2016 via its direct-to-consumer Ally Home, and in mid-April, it announced a partnership with Better.com to launch a digital mortgage platform.

Ally Financial’s top and bottom lines have ebbed and flowed over the past few years, but things are starting to perk up, and the pros are starting to take notice. The company beat Q1 earnings estimates in April, prompting a couple “Buy” calls. That included one from Oppenheimer analyst Dominick Gabriele, who wrote, “We see a long runway for earnings given continued strong management execution that some investors are only just beginning to appreciate.”

The company started dividends relatively recently, at 8 cents per share in 2016, and has already more than doubled it at its current 17 cents per share. That history–as well as optimistic profit-growth estimates of 10% annually through 2024–would almost seem to guarantee breakneck dividend growth going forward … right?

In early April, Ally announced a massive $1.25 billion repurchase program for 2019 that was far more than what most analysts expected. When you factor in that, the financial stock’s total “cash return” payout ratio is actually a hair above 100%. So yes, Ally does indeed have the means to make major dividend increases going forward … but only if it’s less aggressive about buybacks.

Ally’s Dividend Is a Mere Morsel of its Profits 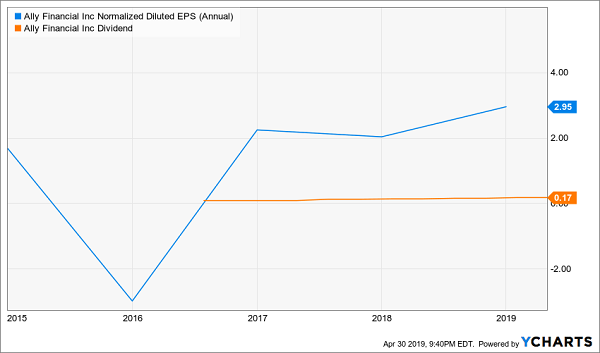 Valvoline (VVV) is a global juggernaut in its relatively niche area of the market. It offers automotive services and supplies lubricants to more than 140 countries, including 1,170 quick-lube stores in the U.S. It has roots going all the way back to 1866, though the company is a relative newbie on the public markets, executing its IPO in 2016.

The dividend is just as fresh, so its five-year growth is extrapolated out from its original 4.9-cent dividend to today’s 10.6-cent payout.

The stock hasn’t been nearly so spry, however. VVV has bounced back and forth since it came public, and shares sit about 16% lower than their IPO price. Particularly troubling was its fiscal first-quarter report in February. Not only did Valvoline miss the mark on both earnings and revenues, but it announced a restructuring to “reduce costs, simplify processes and ensure that the organization’s structure and resource allocation are focused on key growth initiatives.” The initiative should save the company about $40 million to $50 million pretax each year starting with fiscal 2020.

Valvoline surely has the room to keep the pedal down on its dividend, though the company’s focus now appears to be reinvigorating growth. I would wait to see green shoots from its restructuring efforts before even considering a move into VVV.

Income investors should know that earnings payout ratios for dividends don’t always tell the whole story. Net income can be manipulated, after all. So I also like to look at free cash flow payout ratios. (You can calculate free cash flow simply by subtracting capital expenditures from operating cash flow.)

Aflac (AFL) is, and has long been, a reliable dividend stock on that and several other fronts.

Aflac, which we all know from its ubiquitous duck commercials, is a leading provider of supplemental insurance – things such as dental and vision plans, short-term disability insurance and life insurance – serving more than 50 million customers.

The company has been slowly but steadily growing for years, though 2017 earnings spiked thanks to a considerable tax benefit. Analysts see more of the same going forward, with low-single-digit profit-growth estimates for the next couple of years. That’s fine. Aflac is an insurer, not a chipmaker.

That reliable growth has translated into a higher dividend each and every year since 2000. And given payout levels like these, shareholders can count on Aflac continuing to plump up the dividend.

Aflac Has It Covered 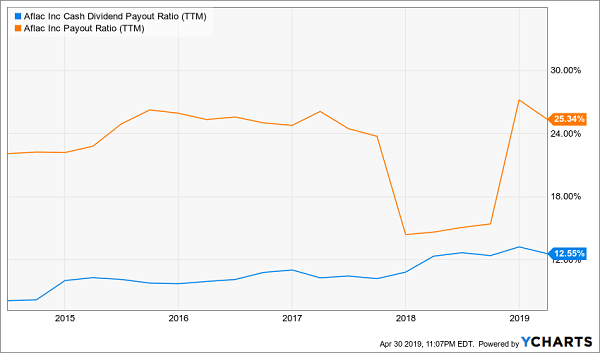 Chemours (CC) is one of the byproducts of years of wheeling and dealing by DuPont … which, following a merger with Dow is now DowDuPont (DWDP) … which recently spun off Dow Inc. (DOW).

That confusing bit of history aside, Chemours–the “performance chemicals” division of DuPont that was spun off in 2015–is pretty straightforward, and really fascinating. For instance, it’s the world’s largest producer of high-quality titanium dioxide, which goes into coatings in automobiles, marine craft and airplanes. It also makes fluor0products such as Teflon, and chemical solutions that cover a wide range of applications, such as acids for semiconductor manufacturing and sodium cyanide production for gold and silver miners.

Chemours’ “performance” isn’t limited to its products. While CC shares had a nasty start in their first year of trading, they’ve exploded by more than 525% off their July 2016 lows, versus 48% returns for the S&P 500 in that time.

The dividend didn’t start to get off the ground until a couple years after the spinoff. What started as a mere 3-cent payout finally took off with a massive jump to 17 cents in 2018, then to 25 cents that same year, where the payout stands today.

Pricing weakness in some of its products have hobbled its performance, and the stock, over the past year, and analysts see earnings weakening this year before returning to 2018 levels in 2020. That’s a lot of sideways movement, which means Chemours would have to inflate its payout ratio to keep up with its red-hot income growth. But considering it distributes just 15% of its net income as dividends … that’s no biggie.

Baconator slinger Wendy’s (WEN) has really come into its own over the past three years.

The House That Dave Thomas Built was only the eighth-biggest fast food chain as of QSR magazine’s August roundup–behind both McDonald’s (MCD) and Restaurant Brands International’s (QSR) Burger King. But it has the happiest shareholders. 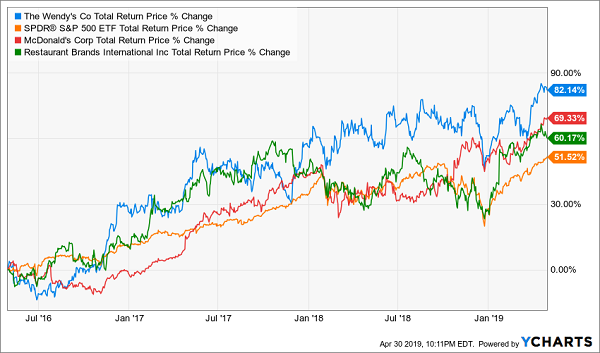 While its actual financial results have been up and down for years, they’re generally trending upward, and analysts expect that to continue this year and next. One of the catalysts for 2019 is a less value-focused environment in the fast-food arena, which is tailor-made for Wendy’s more premium positioning compared to the likes of McDonald’s and Yum! Brands’ (YUM) Taco Bell.

Wendy’s also has managed to double its dividend since 2014 to its current dime per share without stretching the purse strings. The company has a lean sub-20% payout ratio and could double the payout again overnight without dropping a bead of sweat.

I obviously don’t expect that, but I do expect the next few Februaries – when Wendy’s announces its payout increases – to be full of fireworks.

Since inception, my Hidden Yields portfolio has returned 16.3% per year. This means our inaugural subscribers are well on their way to doubling their money with safe dividend stocks! With patience and persistence, you can enjoy the same types of returns by following our dividend double strategy.

Today, I want to share seven of my recession-proof ‘Hidden Yield Stocks’ with you.

Imagine no more fear of your savings running dry… no more worrying about wild market swings or crashes… no more risky-bets on penny-stocks or cryptos… no more penny-pinching in your golden years.

So, if you’re not quite as wealthy as you hoped you’d be… if you wish you had more money in your retirement account… and… if you’re looking for safe, secure growth over the next 5, 10, 15, even 20 years—as well as predictable income—this could be the most important investment advice you ever read.

Please click here to learn the names of my seven favorite dividend stocks with 100%+ upside. I’ll share their names, tickers and my full research with you including my recommended buy-up-to prices.