A “No-Brainer” Buy for a 6.9% Yield and Double-Digit Upside

It’s as close to a sure thing as you can get: interest rates are headed higher.

The futures market tells the tale. Right now, it pegs the odds of a hike at the Federal Reserve’s December 14 meeting at near 100%:

Everyone Agrees: Rates to Rise 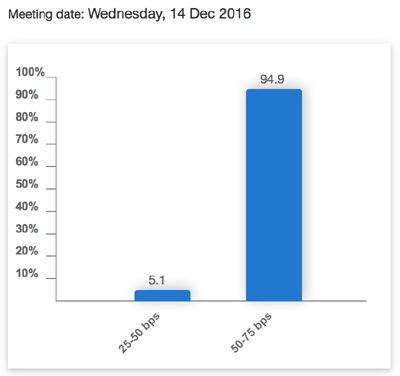 What’s more, futures markets expect interest rates to go up again in 2017. So if you invest in bonds in a market like this, you need to consider how you can protect yourself from higher rates.

I’ll show you a one-buy option that will do just that—and hand you a nice 6.9% yield in the process—in just a moment.

First, let’s look at how the ground is shifting under bond investors’ feet.

When interest rates go up, the value of existing bonds goes down, as their lower yields make them less desirable than newer bonds issued at higher yields.

As rates head higher, closed-end funds (CEFs) that specialize in bonds take a double hit: not only do their holdings go down in value, but their leverage becomes more expensive. When the Fed raises rates, the LIBOR (or the average interest rate at which major banks borrow from each other) tends to go up too, and CEFs typically borrow at rates tied to the LIBOR.

Lower asset values and higher borrowing costs—it all sounds like a reason to panic. And that’s exactly what happened at the end of 2015.

Take a look at how the Cohen & Steers Closed-End Opportunity Fund (FOF), a fund of funds that invests in a variety of CEFs, with many of them exposed to all kinds of bonds, performed before and after the Fed hiked rates last December: 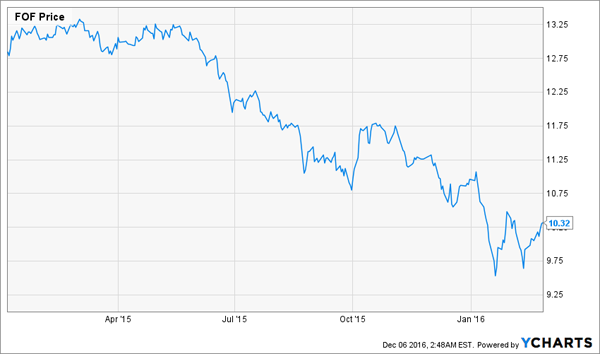 That’s right: a 30% loss in less than a year! Of course, anyone who sold in early 2016 lost a lot of money, and FOF has recovered nicely in 2016, nearly reaching its previous levels: 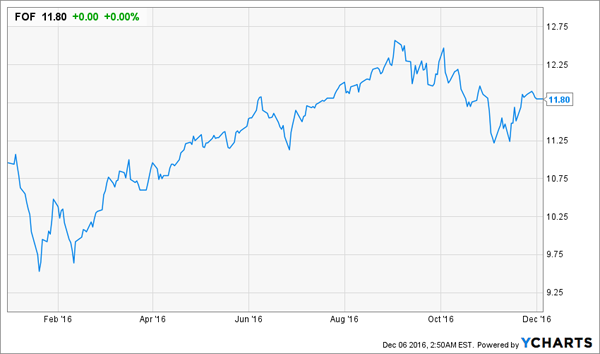 FOF’s rise isn’t because it’s a good fund or because its fundamentals improved. It’s due to a better performance from CEFs generally, as the market came to its senses and realized it had overreacted.

In fact, I’d recommend staying well clear of FOF, for many reasons. First, some of its holdings are just plain bad. For instance, 2% of the portfolio is in the SPDR S&P 500 ETF (SPY) and 1.8% is in the SPDR Gold Shares ETF (GLD). Not only are these not CEFs, but they are index products that by definition cannot outperform the index.

Second, other holdings, like the Kayne Anderson MLP Investment Company (KYN), charge outrageous fees. KYN’s total expense ratio is 5.1%–and then FOF charges nearly 1% of fees on its own! With a management fee on top of the underlying CEF fees, FOF quickly becomes a very expensive fund to own.

However, FOF’s price performance does tell us that we need to think carefully about how we approach bond CEFs in a rising-rate environment. Specifically, we need to be particularly choosy when looking for bond funds that will withstand higher interest rates while still giving us a high dividend yield and capital gains upside.

To identify the right bond funds, let’s take a look at some research by Nuveen, an investment manager with over $200 billion in assets under management. The firm studied the way different bonds performed in the last three rising-rate periods, and its conclusion was clear: asset-value declines were actually pretty minor each time.

Going back to the CEF universe, then, I’ve filtered out five funds that specialize in limited-duration corporate bonds and also boast high dividend yields and deep discounts to net asset value (NAV). Not all of them buy only short-term corporate bonds, but they all focus on lower-duration bonds and will be more closely correlated to short-term corporates than many other bond CEFs.

But I don’t recommend simply buying all of these funds and calling it a day, because there are three other factors you need to consider: fees, discounts to NAV and differences in each fund’s holdings.

Of these funds, ERC and EVG have the highest discounts to NAV, but EVG’s fees are much higher than ERC’s, which are the lowest of the group, at 0.9%. However, ERC is focused on global bonds, with many assets in Brazil, Indonesia and South Africa; many of these holdings are energy related, meaning we’re steering away from our initial goal of protecting ourselves from interest rate risk.

Of the remaining three, I like BLW the best. FTF’s yield is the lowest of the group, and its holdings are heavy on mortgage-backed securities issued by Fannie Mae and Freddie Mac, which don’t fit with our goal of focusing on limited-term corporate bonds. EVV’s expense fee is one of the highest in the group, at 1.36%, and it’s more heavily levered, at 36% of net assets.

BLW has much lower fees, at 0.77% of net assets, which is the lowest of our five selections. The fund uses less leverage (29.7% of net assets), and its 9.7% discount is respectable and close to the others.

Moreover, BLW is well positioned for rising interest rates because of the limited effective duration of its holdings, at 3.6 years. The fund holds 83% of its assets in corporate bonds of US companies, such as JPMorgan Chase & Co. (JPM), First Data Corp. (FDC) and Goldman Sachs Group (GS). Ninety-six percent of its holdings are US-dollar denominated.

On top of the quality of its portfolio, BLW’s dividend looks very secure. Its current distribution coverage ratio is 106.3%, meaning the fund is earning an extra 6.3 cents for every dollar it pays out. It’s also holding enough undistributed net investment income to cover dividends for more than two months.

That high level of UNII means a special dividend is likely to come soon. If so, it would be a repeat of last summer, when BLW paid a 1.8% special dividend, bringing its “true” annualized yield up to 8.7%. But even if the fund doesn’t pay out its UNII, it’s still a 6.9% payer with enough extra cash to invest in new bond issues if rates go up sharply.

6 More Screaming Bargains Yielding Up to 11.0%

As attractive as BLW is right now, it just doesn’t pay enough to merit a place in our new “No-Withdrawal” retirement portfolio. As the name suggests, this powerful collection of investments lets you retire and live solely on dividend income without having to sell a single share.

Obviously, the more money you have, the better, but the here’s the upshot: a $500,000 investment today would immediately kick-start a reliable $40,000 income stream, thanks to this rock-solid portfolio’s 8.0% average yield.

Now it is true that BLW could get our “$500,000 retiree” over the $40,000 hump if management decides to pay a special dividend, but that’s far from guaranteed.

Do you really want to leave part of your income in someone else’s hands? I wouldn’t, and I don’t think you should, either.

And thanks to my “No-Withdrawal” portfolio, you don’t have to. It spreads your cash across 6 safe investments yielding between 6.0% and 11.0%. All 6 will hold their own no matter what the Fed throws at us. And just like the bond CEFs above, they all trade at big discounts to net asset value. But that won’t last long, so the time to buy is now.

I can’t wait to show you these 6 incredible investments and the nuts and bolts of our strategy. Simply click here to discover them for yourself and see how easy it is to start collecting your 8.0% income stream today.