A “Trump Windfall” Will Lift These Dividends 100%

The investment mantra “Don’t fight the Fed” may soon be replaced by a timelier one.

The S&P 500 has returned 4.3% in the month since the election. But certain sectors (such as banks and energy) have climbed even higher, faster. While others (such as REITs) initially languished.

Some of these moves are due to correct. But we also have a set of spectacular dividend growers selling for their cheapest prices this decade. Let’s sort through these Trump trades to find the remaining pockets of value for yield and price upside.

Banks: Below Book No Longer

As recently as spring, some of the best banks on the planet were selling for less than their book value. This means you could have purchased their stocks for less than the cost of their underlying assets – and received the businesses themselves for free!

That market inefficiency has since corrected itself quickly. The four bank stocks I highlighted in April have returned an average of 53% in just 8 months! 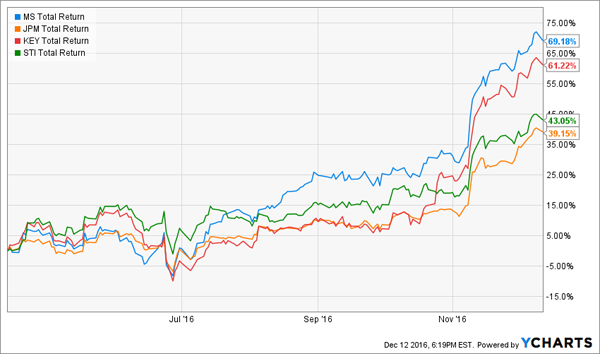 Donald Trump’s surprise victory was a big catalyst. He’s already being anointed the first “inflation president” since Jimmy Carter. Pundits are assuming that he’ll get his low taxes passed, his huge infrastructure approved, and throw another trillion or so at the military. Inflation will follow, which means interest rates – and bank profits – will rise.

That’s a lot to assume. But it’s also a reminder that out-of-favor stocks often don’t need much of a spark to get rolling. When there’s nobody left to sell, investors are often looking for any excuse to buy.

The free lunch in bank stocks has been consumed. Banks trading below book are now few and far between. Going forward these firms will need to increase their earnings – and especially their dividends – to continue this rally.

The only big bank still trading at a discount to book value? Citigroup (C) at 81%. If you trust Citi’s books, then it may be the last easy bet on the board.

As recently as August, industrial firms – those that make big physical products – were paying yields of 3% to 4%. That was quite a premium to the broader stock market. Investors feared that the business cycle was topping, and these profits were in danger of rolling over.

As with banks, worries were unfounded and these issues rallied higher when the world didn’t immediately slip into a recession. But much of the fast money has already been made on this trade, too. For example, the rally in Cummins (CMI) has pushed the stock’s yield down from all-time high levels: 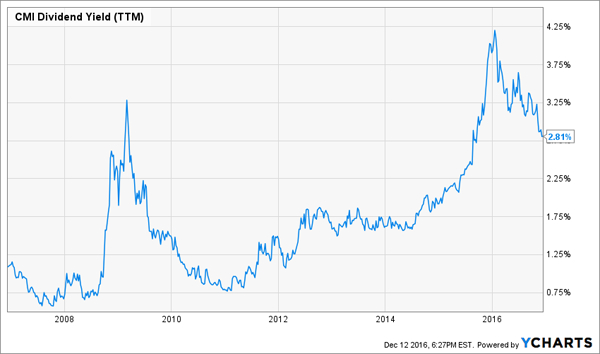 Why is this significant? Because Cummins’ yield and price tend to move inversely like clockwork. When its yield is high, it means its price is low – and due to rally:

When CMI’s Yield is High, Buy 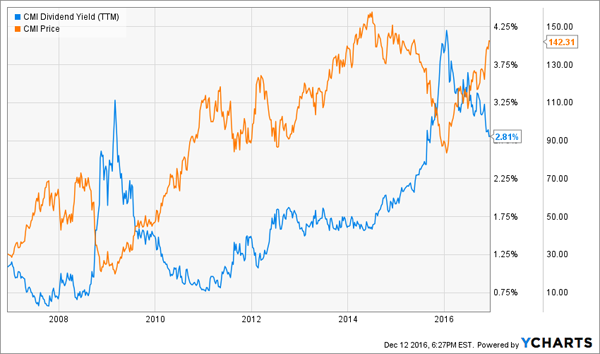 You may view stock prices at all-time highs with caution. And I don’t blame you – I also prefer to invest in items that are cheap and out-of-favor. But when it comes to yield, higher is better – and a payout near the top of its historical range is usually a strong signal to buy.

That’s no longer the case with financials and industrials. But their rallies have given way to a big buy signal in publicly traded real estate.

“First-level” investors – those who buy and sell on headlines – mistakenly believe that real estate investment trust (REIT) profits will suffer if rates rise. Thanks to these false pretenses, some of the best landlords on the planet are now selling at big discounts.

If you missed the banks and industrials rallying, this is the next out-of-favor sector likely to rally.

REITs are on sale, for now, because long-term rates have rallied. On any given day, if the 10-Year Treasury’s yield rises, REITs usually fall. And when its yield drops, REITs usually rally. This inverse relationship tends to hold up over multiple days, weeks and even months: 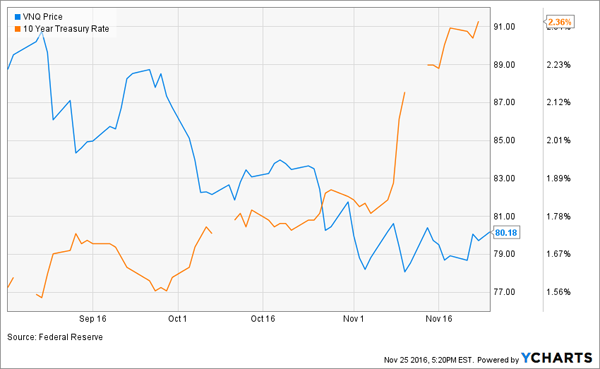 And REITs have quietly bounced off their post-election lows. The Vanguard REIT ETF (VNQ) just pulled ahead of the S&P 500, 5.5% to 4.3% since Trump’s upset.

Many REITs will be just fine – and self-storage firms in particular should continue to thrive no matter what happens with rates, and the broader economy for that matter. America’s bull market in “stuff” has driven 18% annualized returns for REITs in this sector over the past two decades.

The three largest publicly traded names, in fact, have delivered total returns between 96% and 265% over the last five years (thanks to payouts that have risen at similar clips): 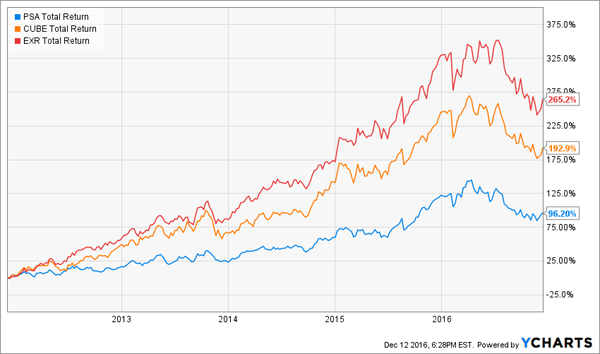 With economics and returns like these, you’d expect these names to be quite expensive. But this is actually the best time to buy them this decade. Self-storage REITs haven’t yielded this much since the financial crisis: 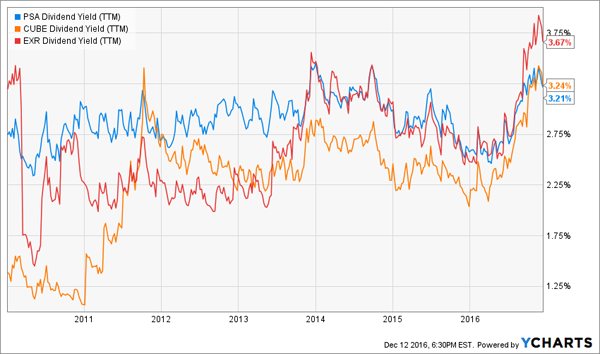 The 3 Best Dividend Growth Stocks for 2017

Should we buy banks, industrials, or REITs for 2017? The answer is actually all of the above.

Sure, growth REITs like self-storage look like buys across the board. But they don’t even crack my top three dividend growth ideas today.

My first is a lesser-known Midwest bank that is still an incredibly cheap growth stock. It’s delivered 240% payout gains since 2010, with no sign of slowing down.

Its executives know this – which is why they’ve purchased 96,322 shares for their personal accounts over the past 12 months.

Meanwhile some industrial stocks are pricier than they were a few months ago. But my favorite off-the-radar company focuses on containerboard, something not getting a lot of attention in the current Trump trade.

That’s perfect, because this cash cow is also a growth machine. Its dividend is likely to double again over the next few years – which means you’ll see 100%+ returns as its stock price follows its payout higher.

And as much as I like the “Big 3” self-storage names, I actually like one growth REIT even better. It’s a “pick and shovel” play on the current e-commerce boom, renting out warehouses to companies that sell products online.

While dividend growth is all that matters for REITs, FFO is the driver. Figure out where FFO is going, and you know where the payouts and stock price are heading – and how fast.

Thanks to the ongoing e-commerce boom, this firm is growing its FFO and dividends by 20%+ annually. This means you’ll see returns of 100%+ in three or four years – and you’ll be paid a growing 3% yield while you wait.

I just wrapped up a special report highlighting these three companies. It includes their names, tickers and my full analysis. Click here to access your copy of my “dividend windfall” report today.