A Revolutionary Way to Cash in on the Soaring Greenback

The US dollar has been heading skyward lately, and the market has been slow to catch on. That’s handing you a nice opportunity for gains if you buy the 3 funds I’ll show you today.

Before we get into these 3 stealth funds, though, let’s step back and look at what’s going on.

First, as I wrote in “A ‘Secret’ Way to Ride the Soaring Dollar to 7.6% Dividends (and Gains),”when President Trump was elected, he insisted on a “weak dollar” policy to boost US trade and exports. At the same time, the Federal Reserve was worried that the dollar’s strength would stoke inflation—which was already ticking upward—so it was eager to see the dollar fall, as well.

And so it did. 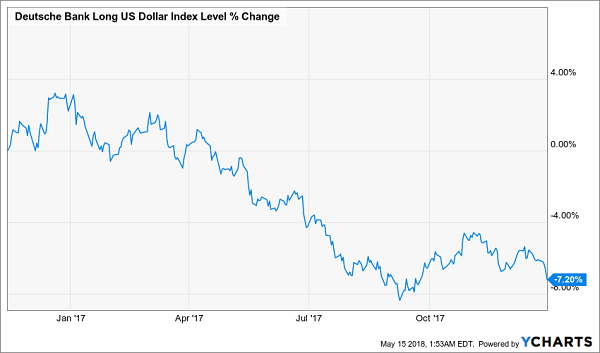 From Trump’s surprise win in November 2016 to the end of 2017, the US dollar had its weakest run in a decade, reversing some of the meteoric gains that have been typical in the post–Great Recession recovery. 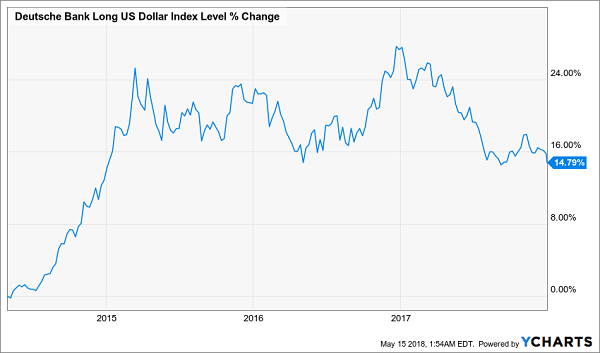 The decline in the dollar was unprecedented and caused a huge outpouring into foreign assets unlike anything we’d seen since the 1990s. Emerging markets were the biggest beneficiaries. Look at the performance of the Vanguard FTSE Emerging Markets ETF (VWO) in 2017: 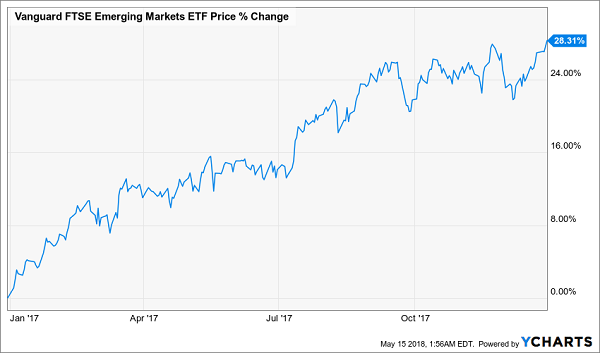 A weaker dollar—and therefore stronger currencies in emerging markets—meant those countries and companies could borrow more, invest more and grow faster. So it’s no surprise their stocks shot up in value at the same time.

Fast-forward to today, and the opposite seems to be just starting to happen. 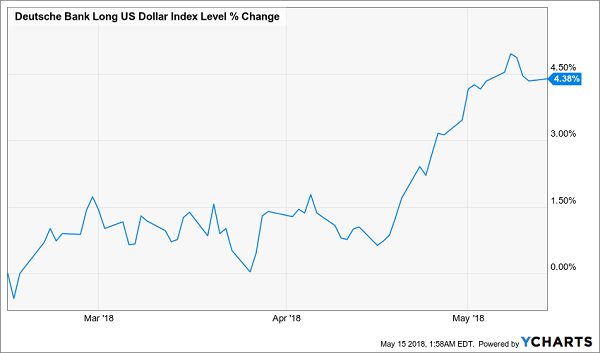 After more than a year of weakness, the US dollar is suddenly shooting up in value—although it’s far from bouncing back from the losses it suffered in 2017. If the rise continues, however, the investing landscape will change completely.

Emerging markets are just starting to feel the pinch. VWO is down 2.8% in the last 3 months, and it may be facing further declines if the dollar keeps rising.

So if now is a time to take emerging-market profits and put them elsewhere, where can we go to take advantage of the recovering greenback?

The first and most direct place would be in a bullish dollar fund. The PowerShares DB US Dollar Bullish ETF (UUP) goes up with the dollar, and it’s been rising lately—although its year-to-date gains remain modest so far: 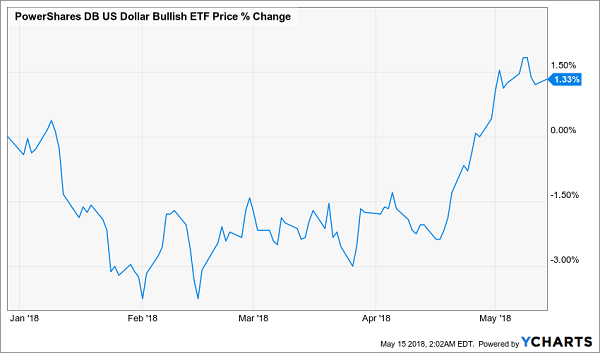 Since UUP is directly tied to the dollar, it’s a good first call for investors wanting to profit from the greenback’s improving fortunes.

Another, more indirect, approach may be even smarter, though. Investors can benefit from an improving US dollar in the same way VWO buyers benefited from the weaker US dollar, but in reverse: buy US companies.

But you don’t want to buy just any American company. Many firms have grown increasingly dependent on foreign sales for growth. Take Apple (AAPL), for instance—iPhone sales growth in China has become a main driver for its stock price, and if a stronger dollar drives up iPhone prices in China and causes Chinese customers to reconsider their purchases, Tim Cook’s company may take a hit.

Apple, as a growth-oriented tech firm, is not typical of bargain-priced large cap stocks, whose management ruthlessly focuses on improving cash flow. The cash-flow focus also means those value companies benefit from a stronger dollar because it means they have more buying power to invest and grow operations both in America and abroad—much like the emerging markets’ native firms benefit from a weaker dollar.

And one way to get into mega-cap value companies is with a value ETF like the Vanguard Value ETF (VTV) or the iShares S&P 500 Value ETF (IVE).

In addition to being well-positioned for a strong dollar, these funds also have another advantage: they’ve been recently oversold. 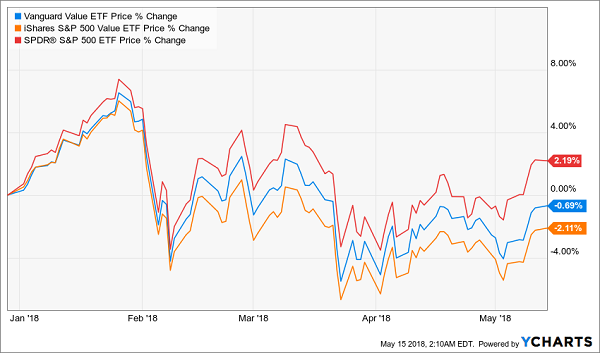 While the S&P 500 (red line here) is up modestly for 2018 thanks to a recent recovery, VTV (blue) is down slightly and IVE (orange) is actually down nearly as much as the S&P 500 is up—despite the tremendous overlap in companies between the two funds (all of IVE’s holdings are S&P 500 firms). While UUP has begun to price in the start of the US dollar’s recovery, that isn’t priced into these value funds at all—and that could mean tremendous upside if you hold these funds over the long term.

There’s also the fact that these funds are up about 20%, on average, over the last 3 years with less volatility than the S&P 500, making them one of the safest ways to play the rising US dollar, as well.

Add 8.2% Dividends to Your Dollar Gains

These are all terrific options to bet on the buck, but what if I told you I’d found a way for you to grab even bigger gains as the greenback heads higher … and an 8.2% CASH dividend too?

Well, you can, when you buy my 4 favorite funds now. Like the 3 ETFs I just showed you, these 4 cash machines are primed to rise right along with the greenback but with one BIG difference: 8.2% straight into your pocket—in cash—year in and year out.

So if you split, say, $100,000 out across these 4 cash machines, a full $8,200 would boomerang straight back into your pocket in the first year alone.

That’s not all, though: these funds also meet my strict criteria for big, safe profits in today’s climate: they’re trading at ridiculous discounts to their “true” value and they’re purpose-built to rise along with the dollar (and interest rates).

So what’s the bottom line here?

Simple: my team and I have these 4 off-the-radar funds pegged for easy 20%+ upside in the next 12 months, in addition to that fat dividend yield!

That’s right—we’re looking at a near 30% gain  by this time next year!

But the prices on these funds are already starting to inch higher, along with rates and the dollar. You need to make your move now. CLICK HERE to get the names, ticker symbols and my complete research on these 4 8.2%-paying “rising dollar” plays now.