I run across “buy and hope” investors all the time. You know the type: they latch on to a big-name stock, like Visa (V) or Berkshire Hathaway (BRK) and “hope” for big price gains.

Truth is, that’s their only option. With most big-cap stocks paying less than 2%, they’re sure not getting much in dividends!

Sad thing is, most people think this is the only way to invest. But there’s a better, safer approach. That’s what I’ll show you today.

It’s a simple investment that lets you buy the big-cap stocks you know well, but with two key differences: you’ll get a 9.2% dividend, so you’re getting much of your return in steady cash payouts …

… and you’ll be able to buy them for less than folks who pick them up individually, or through an index fund.

This investment is called a closed-end fund (CEF). I’ll name a CEF you can buy now (sporting that rich 9.2% payout) shortly.

First, let me bust a big myth the clickbait writers and hysterical talking heads are spreading with abandon: that now is not the time to buy US stocks.

The truth is 100% the opposite: American stocks are your best play—and, thanks to the CEF I’ll show you in a second, you can get the best of them at an unusual “double discount” that’s set to put a lot of money in your pocket.

The US: Economic Growth Done Right

It may sound weird, but there is such a thing as bad economic growth. The kind of growth the US saw in the mid-2000s was an example: fueled by credit and artificially inflated housing prices, that kind of growth was doomed to end in misery.

Today’s situation is nothing like that. With US GDP rising over 2%, most growth is coming from higher consumer spending, not rising home prices or companies hoarding capital because they’re afraid of an uncertain future. 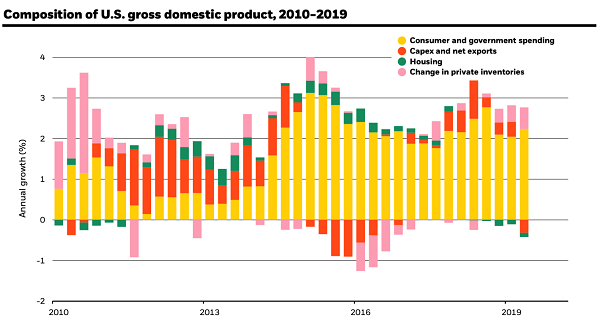 In the early 2010s, when the economy was still shaky and people were terrified that the Great Recession would return, consumers spent less and companies invested aggressively to pick up the pieces from that disaster. Hence, capital expenditures and a hoarding of capital (change in private inventories) were the main growth drivers.

Now, we’ve gone back to what a healthy economy looks like: confident consumers buying goods and services, providing capital and the chance for companies to profit.

The real litmus test of consumer spending is a measure called “real personal consumption expenditures,” and as you can see above, it shows a 15% jump in the last five years (inflation adjusted). That means more revenue (and profits) for American companies and bigger returns for shareholders.

Now let’s move on to something else you rarely hear: stocks are cheap today. To see how I’ve arrived at that conclusion, let’s look at the price-to-earnings ratio of American stocks, both historically and geographically. It’s a clear indicator that investors haven’t already priced in all the strong, healthy growth we’re seeing today. 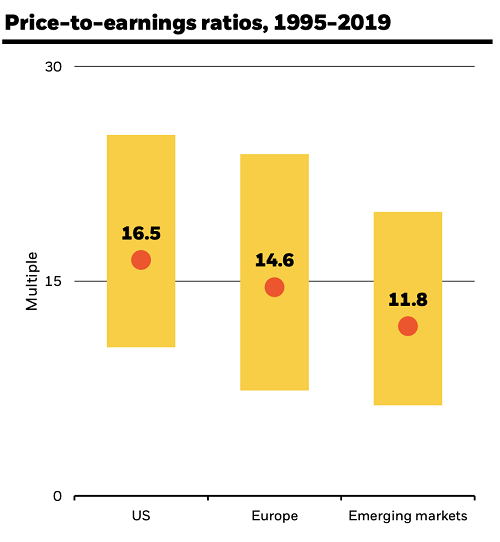 As you can see above, the P/E ratio for US stocks is now 16.5, below the midway point of the last 24 years. Meanwhile, European stocks are a bit cheaper, at 14.6, but closer to their historical average; emerging markets are the cheapest, at 11.8, but also closer to their average.

The most obvious takeaway is that, on a historical basis, American stocks are relatively undervalued compared to other markets. But US stocks still boast a higher P/E ratio, so does that mean Europe or emerging markets are a better bet?

The answer is no. For one, European growth is much lower than America’s, for a variety of reasons, including less innovation (where are Europe’s Googles and Apples?) and demographic headwinds (Europe’s aging population is a bigger problem than anywhere else, except Japan). 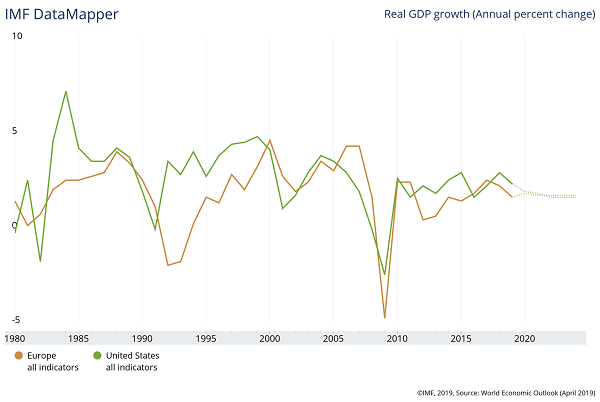 As you can see above, the US typically has higher growth, and European economies tend to go down harder and faster in bad times. European stocks should be priced at a discount, because there’s less opportunity for their sales and earnings to rise.

What about emerging markets? They’re clearly fast growing—so shouldn’t they have higher P/E ratios? In an ideal world, this would be the case, but reality has taught investors that EM companies can be volatile and unreliable. They can also suffer from corruption and a lack of consistent accounting standards. The market priced in these negatives long ago and continues to do so, as there’s no evidence EM companies are anywhere near overtaking US firms in reliable, consistent earnings growth.

Getting an Even Better Price

The data makes it clear: American stocks are where you want to invest right now. Still, picking the right ones takes some digging, which is why index funds are so popular.

But there’s a problem: index funds bring us right back to our “buy and hope” crowd, with dividends less than 2%.

We can get a bigger payout with a CEF. The one I want to show you today is the Eaton Vance Tax-Managed Global Buy-Write Opportunities Fund (ETW).

Don’t let the “global” in the name fool you: while it does buy some foreign stocks when the time is right, ETW is a big bet on American consumers, and it sports a great portfolio: Microsoft (MSFT), Apple (AAPL) and Alphabet (GOOGL) are among this fund’s top holdings, so you’re getting the companies best positioned to benefit from America’s healthy growth.

Plus, ETW’s payouts are huge: the fund’s dividend currently yields 9.2%, more than four times the payout you’d get from an index fund. What’s more, ETW pays dividends every single month.

The best part: you’re getting these companies at a discount.

Since ETW, like many closed-end funds, trades at a market price far lower than its net asset value (NAV), or the real value of the fund’s stocks on the open market, you’re getting Microsoft, Apple, Amazon and the rest for cheaper than you’d get them with an index fund.

Right now, this fund trades at a 4.1% discount to NAV, which makes it one of the many attractive options among CEFs to buy stocks for less than the masses buy them while also getting a huge income stream.

ETW is far from the only CEF with a huge yield: across the entire CEF world (some 500 funds) you’ll find 7%+ yields everywhere—with many running well into double digits.

Why don’t you hear more about these cash-rich funds?

The reason is simple (and, sadly, unsurprising): CEFs take just a little more digging than your typical index fund or stock, and most media pundits just can’t be bothered.

It’s far easier to talk about the latest sales numbers from Tesla (TSLA), say, or a hot new cannabis ETF.

That’s too bad, because CEFs are critical to attaining the retirement you want: where you can live on dividends alone, without tapping a penny of your hard-earned capital.

But don’t worry—I’m not going to leave you hanging here.

That’s not all: all 5 trade at far bigger discounts than ETW.

What does that mean in terms of upside? My team and I fully expect 20%+ price gains in the next 12 months. And that’s on top of their massive 8% average cash stream!

Don’t miss your chance to buy these funds while you can still do so at a bargain. Discover these 5 dynamic funds for yourself—names, tickers, dividend yields and everything you need to know about the people who run the show—right here.