Dividend yields are so low today that dividend growth is actually becoming cool. Income investors are combing over “Dividend Aristocrats”–stocks that have raised their payouts for 25 straight years–in desperation to find any meaningful yield.

Problem is, these stocks are so popular and richly valued that they don’t pay much today. Nor will they yield much more tomorrow, even with yearly raises. Our princely picks pay less than 2% today, which is going to net you less than $20,000 on a million bucks. 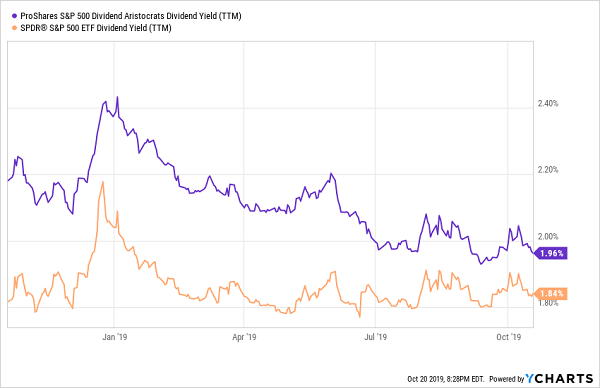 The Dividend Aristocrats are the well-worn, oft-recommended dividend growers of the S&P 500. All 57 Aristocrats have improved the amount of their total annual payouts every year for at least 25 years (and in many cases, they have done it for much longer.)

Yes, reliably increasing income matters. After all, the dividend-growth strategy in my Hidden Yields product is roughly doubling our money every four years with a 17%+ yearly return since inception.

But the Aristocrats are starting with too much of a handicap. As you can see above, the ProShares S&P 500 Dividend Aristocrats ETF’s (NOBL) yield is better than the market, but still below 2%.

That’d be OK if we were sacrificing high nominal yields for great price performance, but we’re not. In fact, NOBL has actually underperformed the S&P 500 since 2013 inception. 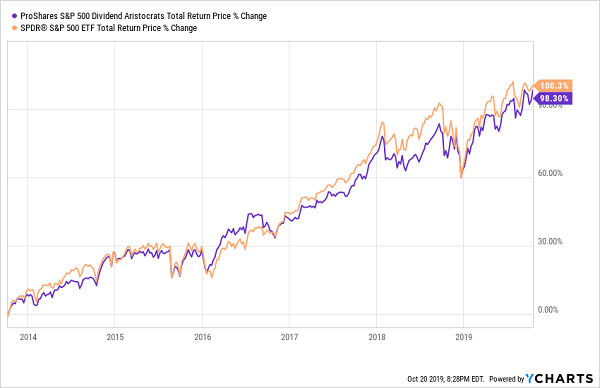 My take? Cherry pick ‘em. A few Aristocrats are truly royalty among the entire world of publicly traded stocks. Others actually have promising growth prospects that you wouldn’t expect from supposedly stodgy dividend plays.

Let’s look at a six-pack of the best and worst Dividend Aristocrats together.

In fact, you probably enjoy McCormick more often than you realize, given that it also provides spices and condiments to restaurants. Overseas, too, as its international reach spans roughly 150 countries and territories.

All this makes McCormick & Co. a recession-resistant play hiding in your pantry corner. When times are tight, folks eat out less and prepare more food at home.

Check out our last mega-recession as an example. While the S&P 500 was trashed during the bear market of 2007-09, MKC managed to tread the boiling water for most of the downturn: 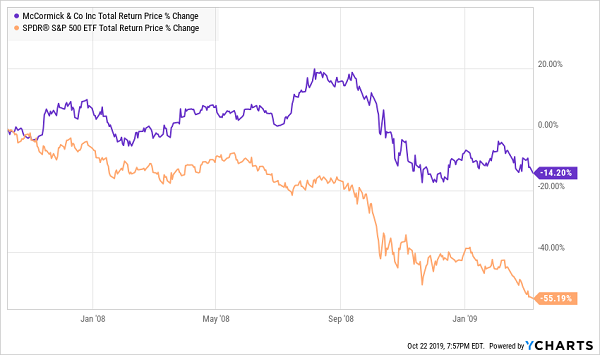 Its dividend, which has improved for 33 consecutive years, has grown by a nice 43% since the start of 2015. But it yields less than a 10-year T-note today, which is not good enough for us income seekers.

Franklin Resources (BEN), the name behind the Franklin Templeton investment firm, has expanded its payout for 37 years. Recently shares have jumped 73% since the start of 2015 plus the firm dished a generous $3-per-share special dividend at the start of 2018 as a way of giving back after the passage of the Tax Cuts and Jobs Act. That translated into an additional 9 percentage points of yield for the year!

However, Franklin’s yield has recently rocketed higher for the wrong reasons. Its business is in the tank, and the dividend looks increasingly dicey as a result.

In June, I highlighted BEN as one of several “zombie dividends” to sell. The company has been suffering from dwindling assets under management for years, and it was way behind the curve with ETFs, finally launching its first suite of passive products in 2017. Since we called out this loser, it quickly dropped 20%:

The Wrong Way to Increase Yield 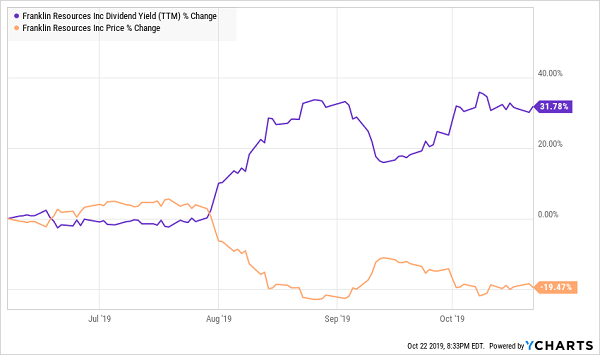 Walmart (WMT) is one of the few retailers that can compete with (and potentially topple) Amazon.com. Sales through Walmart’s website and mobile app are booming. Its e-commerce revenue is growing at a brisk 43% clip year-over-year.

In my college days at Cornell we operations research and industrial engineers (ORIE) actually studied Walmart’s supply chain. It was one of the finest examples of ORIE applied to market domination. “Wally World” is one of the few retailers positioned to compete with Jeff Bezos and Amazon on same-day delivery, thanks to its logistics expertise and deep bench of brick and mortar locations. Really the firm is one partnership with Uber away from getting you anything you want within the hour.

WMT also serves as a poster boy for the inarguable link between dividend growth and share-price returns. 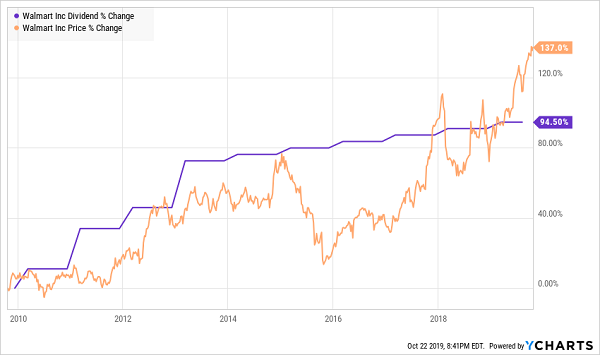 Clorox (CLX) is a consumer staple that needs no introduction. But to get an idea of just how wide its reach is, understand that Clorox is far more than just Clorox. It’s also Pine-Sol, Brita water filters, Fresh Step cat litters, Glad trash bags, Liquid Plumr, Burt’s Bees lip balms and even Hidden Valley ranch sauces.

These are durable brands that have no-brainer recession appeal. But the company is taking a decided step back.

Earlier this month, Clorox presided over a dour analyst meeting in which it cut its full-year guidance from $6.50-$6.30 per share to $6.25-$6.05 per share. That led to several price-target downgrades, including by JPMorgan’s Andrea Teixeira (Underweight rating), who trimmed her outlook from $143 per share to $137. What’s particularly concerning is she sees additional downside earnings risk.

There’s little criticizing CLX’s dividend growth. Payouts have been on the rise for 42 consecutive years, and have improved 43% since the start of 2015.

But the sub-3% yield is nothing to fawn over, especially given Clorox’s growth issues. It’s also curiously priced at 23 times profits. 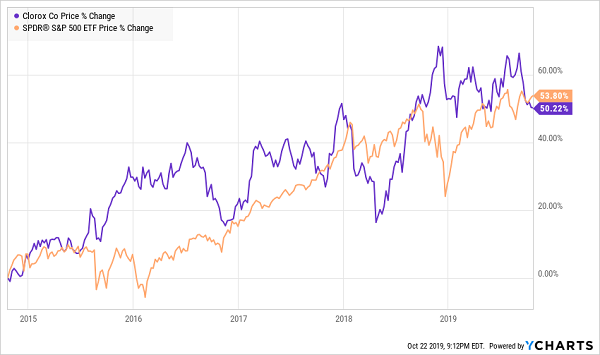 Near the end of 2018, I told Market Wrap host Moe Ansari that the key to finding potential doublers is to home in on boring stocks.

And Dover (DOV) is a publicly traded bottle of ZzzQuil.

Dover is a diversified industrial that makes everything from product-tracing technologies to bench tools to chemical dispensing systems and even commercial refrigeration units. That kind of revenue diversification always keeps Dover in the game, and more importantly, it has helped finance one of the longest-standing payout increases among the Aristocrats.

Indeed, I mentioned Dover in July 2018. Since then, it has announced two more annual dividend increases to extend its streak to 64 years. It has also quadrupled the broader market with 43% in total returns.

The Saucy Side of Fluids and Food Equipment 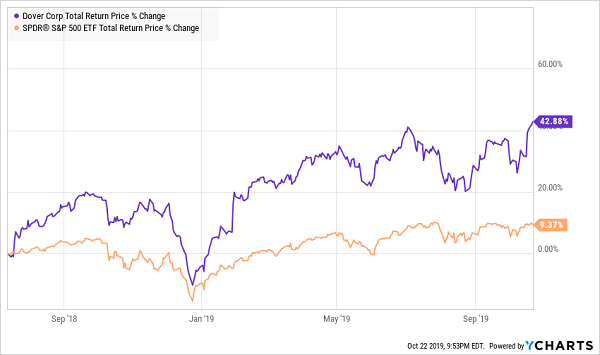 Dover is a little pricey at the moment, but it should keep slowly churning out growth of about 3% annually over the next few years. The bottom line is what’s more encouraging–analysts are looking for a 17% bump this year and a still-respectable 8% improvement on top of that in 2020.

“There is something that goes beyond the impact of cyclical volume pressure here. (A) structural issue, that there is generally a higher cost to serve than many appreciate, now seems clear.”

It’s yet another sign of just how much has turned for what once was one of the most consistent blue chips on Wall Street. It’s currently mired in its sharpest decline in decades, a 35% drop since early 2018. 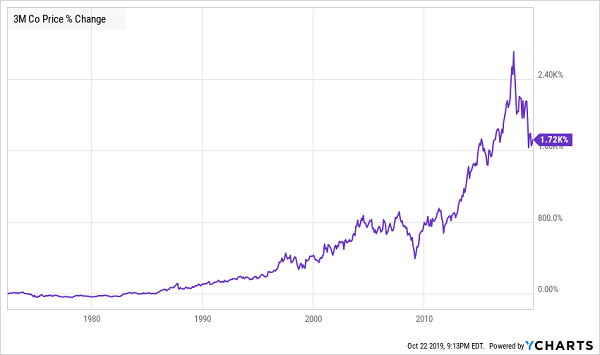 The industrial conglomerate that’s responsible for Post-it Notes, Scotch Brite  and Nexcare bandages has delivered a few dismal reports in that time. That includes a ghastly earnings miss in April that saw it also cut its full-year forecast, announcement of the layoffs of 2,000 workers, and informed investors it was undergoing some restructuring and other measures to try to cut costs and boost cash flow.

It’s also been bitten by the litigation bug. 3M could face as much as $6 billion in legal liabilities connected to accusations that the company’s chemicals have shown up in groundwater across the country.

3M is one of the longest-tenured Dividend Aristocrats at 61 consecutive years and counting. But even that seems like less of a guarantee than it used to. While the payout is well-covered at less than 70% of profits, Tusa warned that “Another leg down in fundamentals would mean they are on watch for a cut, after 37 straight years of increase.”

Will things degenerate that much? It’s difficult to say. But 3M appears set up to endure more pain before it establishes an enduring recovery.

It’s remarkable to think that even the most reputable blue chips sporting decades of dividend growth can be so suspect.

But that’s how I can help you separate yourself from “first-level” investors. While they lean on lazy recommendations based on past performance and reputations, I invest using methodical, forward-looking analysis, and sniff out the dangers in supposedly no-brainer plays.

And I want to start by showing you how to get real income. We’re talking safe, sustainable payouts of 3 to 4 times what most Dividend Aristocrats deliver.

This is no time to gamble in a desperate stretch for yield. We’re in the back half of a bull market that’s extra-long in the tooth, and numerous global risks are converging on this fragile market.

Big yields mean nothing if you’re not protecting your hard-earned nest egg, too.

And that’s precisely the inspiration behind my 5-stock “2008-proof” portfolio, which I’m going to GIVE you today.

With the Dow regularly lurching a stomach-churning 1,000 points (or more) in a single day during pullbacks, I’m sure a safe—and growing—7.5% every single year would have a lot of appeal.

Think about that for a second: You can buy this incredible stock right this second, and every single year from now on, nearly 9% of your original buy boomerangs straight back to you in CASH.