I told you GameStop’s (GME) dividend was toast. Did you sell, or better yet, short the stock?

Just one quarter ago, we chatted about the inevitability of this paper payout ending in tears:

Brick and mortar video game retailer GameStop (GME) is a throwback to yesteryear. It’s survived the rise of digital distribution for video games thus far because Microsoft, Sony and Nintendo haven’t fully digitalized their sales. (In other words, they still sell physical boxes that are bought at stores like GameStop.)

But this sales model is ultimately toast and GameStop doesn’t have a convincing second act. Income investors who mistakenly think they are connecting with millennials with this double-digit dividend should give their kids (or better yet, their grandkids) a call to see how they’re buying their video games these days.

Since then, this happened: 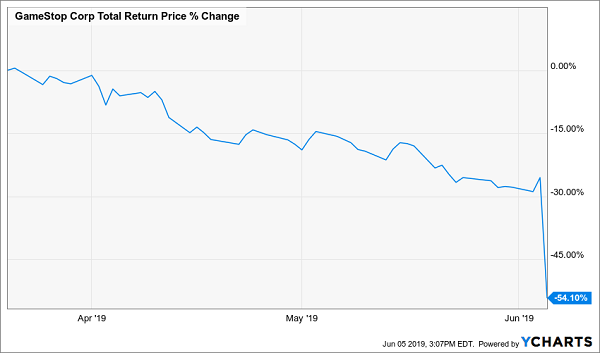 When dividends get cut, stocks get crushed. And payouts go unfunded when business models become obsolete, as I warned with GameStop.

In that spirit, let’s discuss five popular “Zombie dividends.” These stocks are probably dead money at best because their business engines are slowing to a standstill.

Utility stocks are well-known for their above-average yields and business stability. It doesn’t get any better than what are effectively local monopolies for electricity generation. Especially when you consider that most utilities are also able to get small but regular rate hikes approved, bumping up their revenues and profits like clockwork.

But they’re not all gems.

PPL Corp. (PPL) is an uncommon utility in that its operations are domestic and international. That is, its 10 million-plus customers are split among Pennsylvania, Kentucky … and Great Britain.

While 2018 was decent from a growth perspective, the company’s results have been up and down for years. Its $7.8 billion in revenues last year were actually slightly down from 2014, as were its $2.58 in EPS. And a capital expenditure plan has been piling on the debt, which has climbed from $17.8 billion to $20.1 billion in just two years.

PPL’s tighter financial situation has caused dividend growth to plumb laughable levels. This year, the utility company raised its payout by a mere two-tenths of a cent to 41.2 cents—a 0.5% “hike.”

You could argue that PPL offers a nice yield as it is, but that’s not even keeping total-return performance even close. Whereas other utilities are at least close to (and better, here and there) than the broader market, PPL comes up lame.

PPL Is a Low-Wattage ‘Ute’ 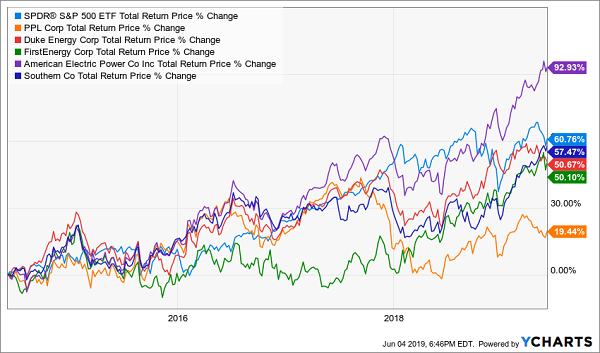 A year-and-a-half ago, I delved into some lesser-known Dividend Aristocrats looking for hidden winners.

Along the way, I dredged up a couple losers, too.

Franklin Resources (BEN) isn’t a well-known consumer brand, but if you’re reading this, you’re probably familiar with its Franklin Templeton investment firm, which includes a distinguished line of bond funds and emerging-market products. And if you’re an income investor, you’re likely very aware of BEN’s status as a Dividend Aristocrat—the company boasts 37 years of consecutive dividend increases, and counting.

However, I said at the time that competition and asset performance were weighing on ol’ Ben, and that hasn’t changed. Assets under management, which were $753 billion as of September 2017, were at $721 billion as of April 2019 – that’s actually a recovery from below $650 million at the end of 2018!

Franklin Templeton also launched its first suite of passive ETFs in 2017, but the company has struggled to make much of a dent in that industry, too. Franklin’s $2.5 billion in AUM makes it the 31st-largest ETF provider behind such juggernauts as, ahem, Victory Capital Management and ARK.

Franklin Resources’ top and bottom lines have been in steady decline for years, and there’s not much signaling a renaissance soon. As a result, BEN has not only underperformed a modest S&P 500 total return since I last panned it–it has delivered negative returns, even once dividends were accounted for. 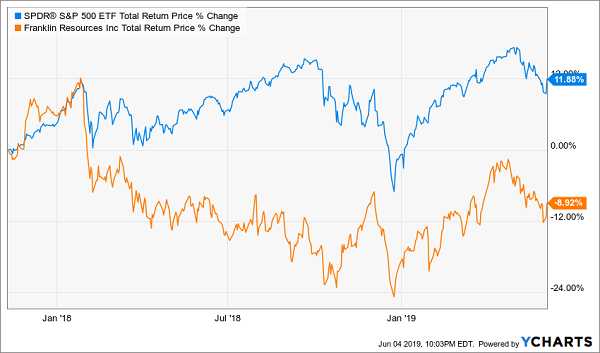 Next up, an update on a well-known high yielder in real estate: mortgage REIT Annaly Capital Management (NLY). Annaly invests most of its assets in agency mortgage-backed securities (MBSes), though it does some business in residential credit, commercial real estate and middle market lending.

In April, I pointed out that while its heavy concentration in fixed-rate securities wasn’t as much of an issue as it was in the aughts, Annaly investors still had reason for concern. A string of lousy reports had continued into the fourth quarter, including a 13.3% year-over-year decline in the Annaly’s all-important “core earnings per share.”

More importantly: “But dividend coverage remains an issue, too. Namely, Annaly has paid out all if not more of its profits out as dividends in each of the past three quarters. The yield is nice, but the cash flows behind it aren’t.”

Fast-forward a couple months, and Annaly yet again posted core earnings that were shy of dividends.

But NLY did come up with an elegant solution to its dividend problem: It announced it would cut the payout to 25 cents per share starting in Q2, knocking its yield down from 13.3% to 10.9%.

Annaly is no stranger to dividend cuts—they were a regular occurrence from 2010 through 2014—and there’s no reason to trust that this will be the last one. Ignore this supposedly “safer” double-digit yield.

I beat up on Coca-Cola (KO) a lot, so let’s look at a few positives first.

Coca-Cola is no doubt a survivor, both offering a quality namesake beverage that has pleased consumers for decades while also navigating some changes in consumer tastes by adding the likes of Minute Maid juices, Dasani water, Honest Tea, Powerade, Odwalla smoothies and, most recently, Britain’s Costa Coffee.

It seems like whenever Coca-Cola plugs one hole, two more emerge. The company’s moves over the past couple years actually has Wall Street optimistic about revenue-growth prospects this year and next. But HSBC’s Carlos Laboy pointed out new issues in his March downgrade of KO, saying that Coca-Cola’s strategy to push ahead with low-margin brands could frustrate bottlers, which in turn could hinder Coca-Cola’s international initiatives.

Meanwhile, KO offers a merely so-so yield, low profit expansion and weak dividend growth for a premium price of 22 times estimates. Yes, the company looks better than it has at other times in the past, but it still doesn’t look good.

CVS Health (CVS) would look, on its face, to be a can’t-miss proposition.

It’s positioned in the seemingly invincible business of selling prescription drugs to people, and it has grown to offer essentially convenience-store fare while also expanding to health-care services via its Minute Clinics. That business, by the way, helped fund more than a decade of consecutive annual dividend increases.

But over the past couple years, things have gotten complicated.

Chief rival Walgreens (WBA) grew via a failed buyout of Rite Aid (RAD) that did at least result in Walgreens being able to buy up about 2,000 new locations. That, and the threat of online pharmacies—specifically, nosing around from Amazon (AMZN)—prompted CVS to try to differentiate itself through a $69 billion merger with health insurer Aetna.

Here’s a look at what CVS has done since around the time CVS-Aetna talk started swirling: 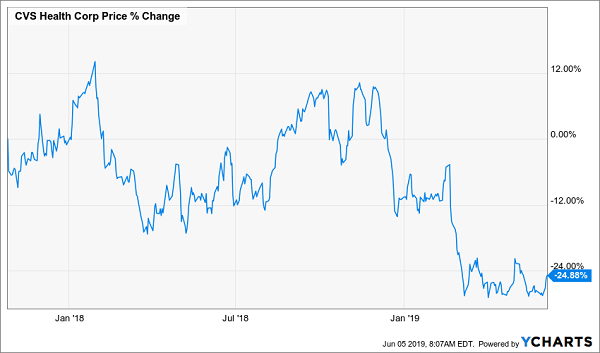 Since then, Amazon has bought online pharmacy PillPack, making its intentions crystal clear. CVS, meanwhile, banked so hard on the Aetna merger that it had to put dividend growth on ice – the payout has been frozen at 50 cents per the start of 2017.

And analyst skepticism of CVS’ ability to fold in Aetna is so far being proven out.

CVS Health just finished unveiling its long-term goals in response to wary investors and analysts that have been more than vocal about their doubt. CVS did little to encourage Wall Street, however, saying that 2019 earnings would actually decline, and projecting smaller profit growth over the next two years than the pros covering CVS projected.

That’s worrying on its own. Plus this plan likely doesn’t account for the potential disruption once Amazon really starts leveraging its PillPack purchase. Will CVS return to growth? Certainly. But I expect it to do so like any unwieldy zombie would: slowly and messily.

It’s clear you need to clear a certain financial bar if you want to reach the retirement promised land.

Merrill Lynch’s brain trust says you need $738,400 to retire. Go on most financial sites and they’ll tell you the magic number is $1 million. Suze Orman said to a word, “You need at least $5 million, or $6 million. Really, you might need $10 million”—and rightfully took a lot of flack for that.

They’re actually all correct… if you’re heavily invested in low-yielding bonds or the kinds of “safe,” decently yielding blue-chip stocks I’ve mentioned above.

But if you stockpile the picks in my “8% Monthly Payer Portfolio,”—including my two favorite preferred stock plays, which each deliver uber-safe yields of more than 7%—you can bank on a comfortable retirement with a mere $500,000 nest egg.

And you can collect a fat income check each and every month, to boot!

This substantial-dividend strategy can net you nearly $3,300 in payouts every month, from an average 7.7% annual yield. And I practice what I preach: These stocks are expected to dish out 10%-plus average price upside, expanding your nest egg to grow your income potential even more.

Get these and the other monthly dividend picks, including two rock-solid preferred-stock plays, that will unlock $3,300 in monthly income right now—for free! Click here to receive each and every pick in my 8% Monthly Payer Portfolio–complete with tickers, buy prices and full analyses.