U.S. investors appeared more than happy to turn the calendar to June this week. After the Nasdaq Composite reached correction territory on Monday, the broader stock market averages rebounded more than 2% across the board on Tuesday.

Even with 5% tariff on Mexican imports set to go in effect on June 10, the initial recovery sparked a multi-day rally. The rebound was ignited by the realization that the FOMC would be more likely to step in and lower interest rates, to better reflect market pricing in the Treasury yield curve.

The May jobs report on Friday was another case where “bad news is good for stocks”. The U.S. added just 75,000 non-farm payrolls last month, which was less than half of expectations. In addition, the readings from the previous two months were revised lower by another 75,000 jobs.

However, those data just added one more feather to the cap of folks seeking interest rate cuts. As a result, Fed funds futures are currently pricing in a 76% possibility of an interest rate cut by July, compared with a 17% chance a month ago.

Sentiment readings are also improving. The Chartcraft Investors Intelligence bullish sentiment reading fell to 42.7% this week. That’s the biggest drop in the contrarian reading since January—another good time to have bought stocks—and close to the strong buy signal of 40%.

One clear beneficiary of lower interest rates is real estate investment trusts (REIT). The group was in focus this week, as the NAREIT conference and NYU Real Estate Symposium both convened in New York, which is the equivalent of the annual Super Bowl for the sector.

Looking ahead to next week, Broadcom (AVGO) headlines a light earnings calendar. On the economic front, we’ll get several key readings on inflation next week. There will be a report on producer prices Tuesday, followed by consumer prices Wednesday and import/export prices on Thursday.

This week reiterated the fact that market conditions can change on a dime. Six months ago, the FOMC raised interest rates and investors were expecting another two or three rate increases for 2019.

Fast forward to today and investors are now pricing in a 58% chance that we see three interest rate cuts by the end of the year. 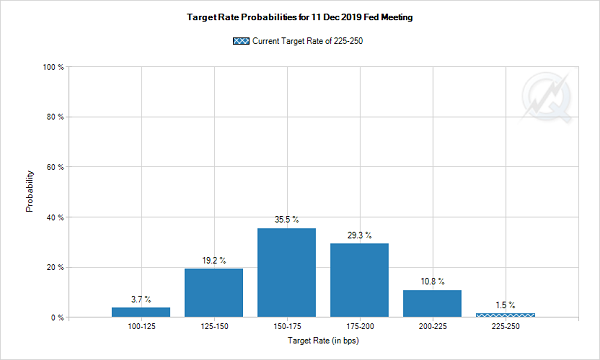 In the same vein, all the talk at the REIT Super Bowl a year ago was how companies were preparing for the first cycle of rising interest rates in a decade. Now, several of these same companies have been wrong-footed and may have to cut dividends in the future, even if lower rates make the safer dividends in the group appear relatively more attractive.

When sentiment changes this quickly, timing the market is a difficult task, no matter how much investment experience you have.

My colleague Brett Owens has devised a strategy that removes the worry of trying to time the market, amongst a sea of volatility. Better yet, he’s composed a portfolio that generates an 8% annual yield, paying steady dividends each and every month!

Most companies pay dividends quarterly, but this portfolio is structured for monthly payouts. That works out to $3,333 a month, every month, whether the broader stock market averages are up 10% one year or down 10% the next.

$3,333 is a nice chunk of change. It pays a lot of bills each month if you’re retired… or is a nice supplemental income, if you’re sick of having earned next-to-nothing in “safe” investments over the past decade.

Speaking of safety, these dividends are secure and will be paid each month… unlike some of the REITs that have been trying to time the yield curve the past several quarters.

Plus, a lot of the names in the portfolio have up to 10% upside potential. You can actually grow your nest egg, while these dividends are rolling in each month!

In order to get started, Brett will share his favorite monthly payers with you today, along with the name, ticker, and buy price for these stocks. Click here to get a full copy of our research on Monthly Dividend Superstars: 8% Annual Yields with 10% Price Upside, Too!