Interest rates are plummeting, which is usually “prime time” for mREITs like Annaly Capital (NLY). The “original mortgage REIT” has traditionally held fixed-rate securities, which rise in price as rates decline.

Annaly investors remember the “roaring ‘00s” fondly. From 2000 through 2012, mortgage rates ticked down, down, down while the stock climbed higher and higher:

The Roaring ‘00s (and Beyond) for Annaly Investors 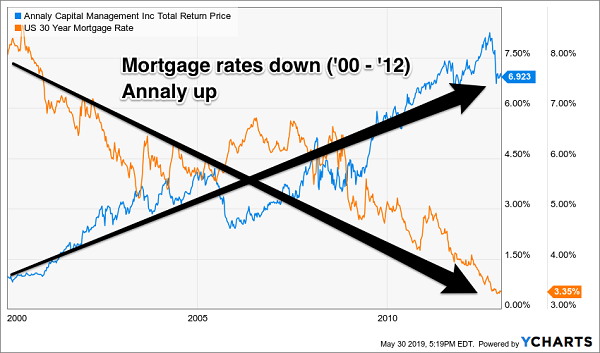 While Annaly delivered total returns of 609%, its yield bounced between a handsome 10% and a gaudy 15%. What a run!

Of course, even the best party has its lulls. This happened when then-Fed chair Alan Greenspan began raising rates in the summer of 2004. The Maestro kept at it for two years and mortgage rates followed the Fed’s cue higher. Annaly’s income took an immediate hit and, within a year, the mREIT had to chop its dividend by 80%!

When payouts plummet, stock prices follow. To a tee, Annaly’s price tanked. It would quickly carve out a bottom, however, as its dividend stabilized:

Annaly’s Price Followed Its Dividend Down 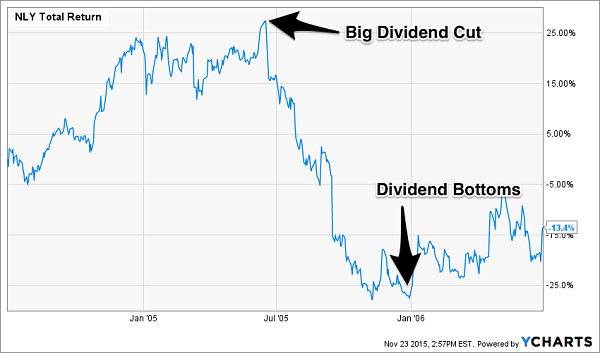 The first chart shows that the severe short-term drop was unimportant over the 13-year run. Problem is, the first chart ends with 2012, which just happened to be a time of mortgage rate historic lows. That’s not good for a firm that mints money when those rates are dropping!

(As an aside, we bought our first house in December 2012. I remember the moment when we locked in our rate, at the dog park with our two Weimaraners. My wife gives me zero credit, stating that all I did was reply to an email on my phone from our bank. We have agreed to disagree on that point!)

Now, give Annaly’s management team credit. They rightfully feared a future filled with 2005s, so they adjusted their portfolio and were better prepared for this rate hike cycle. The firm hedged its portfolio and diversified into commercial loans. The result was 33% total returns (including dividends) since the Fed began hiking in late 2015: 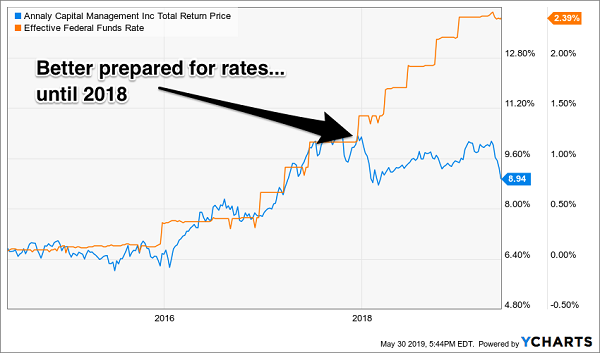 Everything worked until 2018. Then, the Fed kept on hiking, yet Annaly simply grinded sideways. It paid its dividend but gave up the gains when its share price slinked lower! The problem here, ironically, is that mortgage rates peaked last November. But Annaly no longer mints money when rates decline:

“Can We Give Our Rate Hedges Back?” 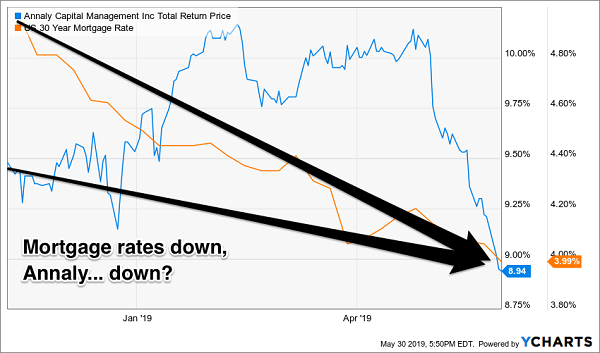 If you dig around the firm’s old investor presentations, you’ll see that the firm was betting on rates to rise. These mentions are available in investor decks as recently as early 2018. It shows where its management team was placing its wagers at the time: they were making one-sided bets that rates would keep climbing.

Of course, they stopped rising and long-term rates soon reversed. (Short-term rates are likely to follow them down soon.) Annaly’s book value per share (the liquidation value of its portfolio) has taken it on the chin. It’s down 27% over the last five years! This decline in book value tips us off to the fact that Annaly is tapping its holdings to fund its payouts.

I told readers on April 2 that Annaly would have to cut its payout. So, here it is—but is this the only cut? I wouldn’t bet on it.

Instead, income investors should focus on mREITs that are actually on the “right side” of mortgage rate trends. Why try to catch this falling dividend knife when there are big payouts with upside thanks to extra earnings power?

My favorite mREIT is perfectly hedged for any interest rate move. Whether they head lower, grind sideways or surprise everyone and head higher, this firm’s profits are going to be just fine.

In addition to this income machine, I really love the short and long-term prospects for five “2008-proof” dividend payers yielding an average of 8.4%. If you’re worried about a repeat of 2008 (and let’s be honest, who isn’t), here are five solid payouts you can purchase today without worrying about an overdue pullback (or worse, an all-out crash).

The “cash or bear market” no-win quandary inspired me to put together my 5-stock “2008-Proof” portfolio, which I’m going to GIVE you today.

These 5 income wonders deliver 2 things most “blue-chip pretenders” don’t, such as:

With the Dow regularly lurching a stomach-churning 1,000 points (or more) in a single day during pullbacks, I’m sure a safe—and growing—8.4% every single year would have a lot of appeal.

These five “2008-proof” wonders give you the best of both worlds: an 8.4% CASH dividend that jumps year in and year out (forever), with your feet firmly planted on a share price that holds steady in a market inferno and floats higher when stocks go Zen.