Today I’m going to show you a two-part dividend-growth strategy that actually made money for one group of investors in the disastrous year that was 2008.

Before we get into the specifics on this technique and an example stock, I want to level with you: I do believe that stocks are likely to head lower in the coming weeks.

That said, if we look one year out from today, I like our chances. But we’re going to give ourselves an added level of security by purchasing stocks with these two traits:

Combine a low beta and an accelerating dividend, and the result can be a truly powerful income-and-growth machine, with the rising payout pulling up the price while the low beta rating throws a floor under the shares when market storms hit.

The classic example of a low-beta dividend grower defying a crash came the last time a financial crisis (as opposed to a health crisis) walloped the market. That was 2008, a year that, as most of us painfully remember, wiped 37% off the S&P 500. But General Mills (GIS), which has a history of being a lot less volatile than the market, sailed through.

During 2008, its five-year beta averaged just 0.23, meaning it was only 23% as volatile as the S&P 500. The reality turned out even better for GIS shareholders: the stock was one of a tiny handful to come through that disastrous year with a gain—and a decent one at that: 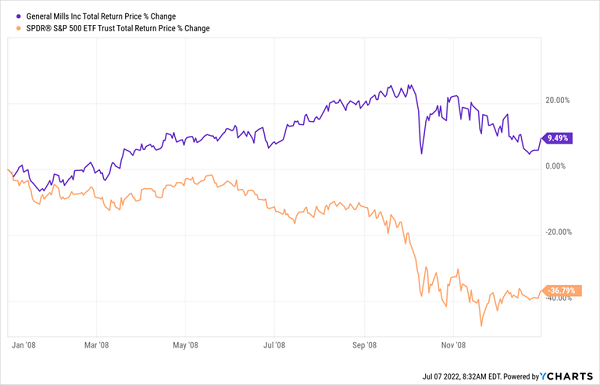 Heck, even when General Mills’ stock bottomed that year, in December, it was still up nearly 2% from its January 2008 level. The only problem with General Mills today is that its dividend growth is not only meager but decelerating. 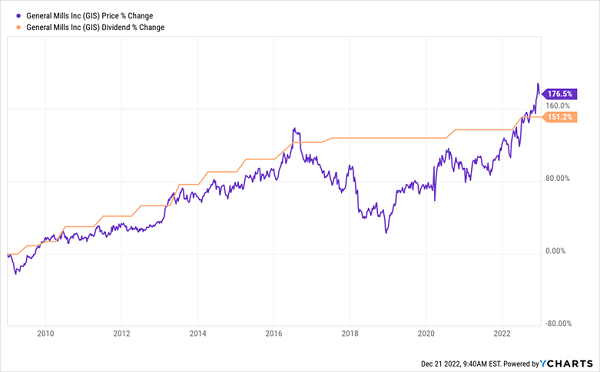 Sure, the payout is up 151% since the end of ’08. That’s okay—and its Dividend Magnet has pulled up the share price in lockstep. But as you can see on the right side of the chart, the dividend hasn’t made much headway in the last six years. That seems unlikely to change as inflation continues to drive up the company’s ingredient costs.

To be sure, GIS remains a decent stock to hold—thanks to its low beta, it’s unlikely to fall as far as the market on the next leg down. But there are far better examples of a Dividend Magnet and a low beta rating combining for superior returns.

Case in point: drug distributor AmeriSource Bergen (ABC), a name that members of my Hidden Yields service know well: we’ve just locked in a 69% total return on the stock, having bought it in June 2020 and selling in our latest issue.

Check out the difference in dividend growth since ’08, compared to General Mills: it’s not even close! ABC’s explosive payout growth has driven a price gain 4.5-times bigger:

ABC Shows What a Real Dividend Magnet Can Do 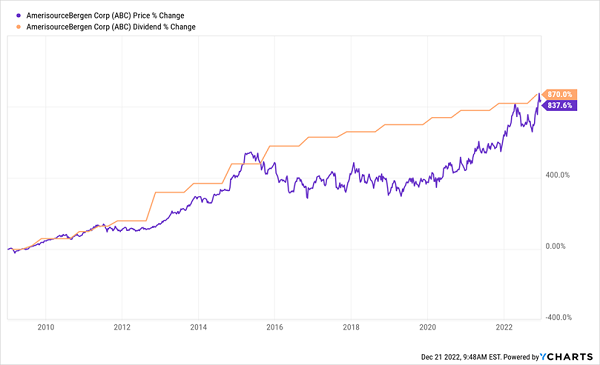 Also note the stock’s accelerating payout growth in recent years. Thanks to its five-year beta of just 0.54, this one should be 46% less volatile than the S&P 500. But this year, like GIS in ’08, it’s done a lot better: as the market sunk 19%, ABC’s return was well into positive territory. It didn’t get the memo that 2022 was terrible for stocks! 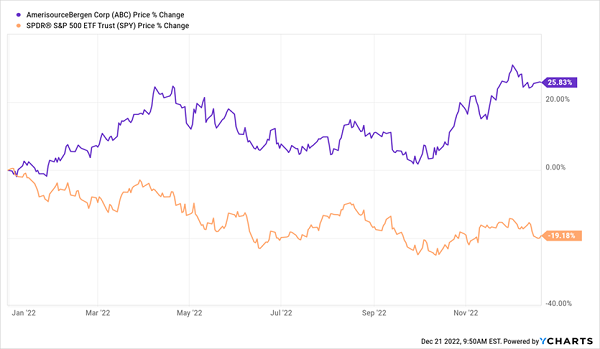 (This, by the way, is the only reason why we sold ABC: it’s only “sin” was that it over-delivered! With the stock looking toppy, it was a good time to sell. We’ll definitely keep ABC on our watch list and consider moving back in if it slips into bargain territory again.)

The key takeaway here is that a fast dividend grower like ABC offers the opportunity to build a safe, high dividend over time. Folks who bought back in ’09, for example, would be yielding 11% on their original buy, thanks to the stock’s 870% dividend growth.

7 “Dividend Accelerators” Set to Deliver the Next 11% Yield

As I just mentioned, ABC, despite its fast dividend growth, isn’t the best pick today because the Dividend Magnet can also work in reverse—weighing down stocks that get ahead of payout growth

But don’t worry, because I’ve uncovered 7 other stocks with this proven combo of dividend growth and low beta that have been drastically oversold this year. They’re the perfect picks for the uncertain market we’re facing as the calendar flips to 2023.

I’ve prepared a Special Investor Report that gives you all the intel, including these 7 stocks’ names, tickers, current yields, payout-growth potential and more. Click here and I’ll tell you more about my “pullback-resistant” dividend-growth strategy and show you how to get your copy of this exclusive report today.