Ackman’s Looking At This All Wrong

Top-20 hedge fund Pershing Square Capital Management just announced heavy losses last year, and a tough start to 2016. The fund is currently down a little over 11 percent YTD in 2016, after losing 20.5 percent in 2015.

The problem, CEO Bill Ackman explains: “We believe that our continued negative outperformance in the first few weeks of the year relates primarily to forced selling of our holdings by investors whose stakes overlap with our own.”

I’m guessing that’s his way of admitting his market timing hasn’t been the best of late. And his short-term focus is hurting the timing of at least one company he’s currently involved with. In his August 2014 investor letter, he claimed his involvement in companies such as Canadian Pacific Railway (CP) was anything but short-term. Problem is, he pressured management into an ill-timed share repurchase that wasted shareholder capital.

Ackman & Co know that earnings drive stock prices. So they focus on earnings – and more specifically, earnings-per-share (EPS) – to “guide” the market’s direction.

In his recent December 2015 investor letter, Ackman boasted that in the most recent quarter CP grew earnings grew by 7% while “EPS grew 16% as the company’s share repurchase program reduced shares outstanding.”

That’s true – but it wasn’t the best use of shareholder capital. Management bought its stock while it was high. It’s down 37% since the most recent repurchase program was announced. 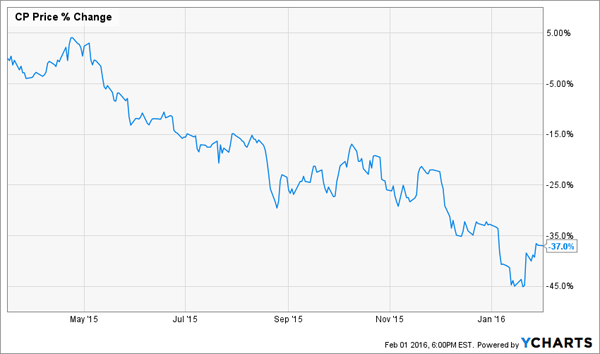 In general, companies have been on a buyback binge. EPS growth, as with CP, has been juiced by a reduction in share amounts. This is fine if companies are paying a good price for their own shares. Problem is, many management teams buyback their stock without any consideration of the price they’re paying. 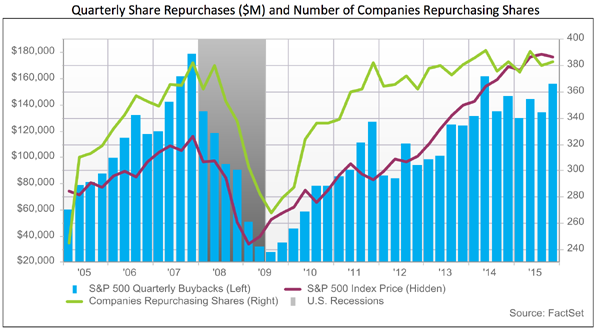 Worse yet, many of them have been listening to Ackman & Co and doing it with borrowed money. Here is a chart of companies whose trailing twelve-month stock buybacks exceeded net income… 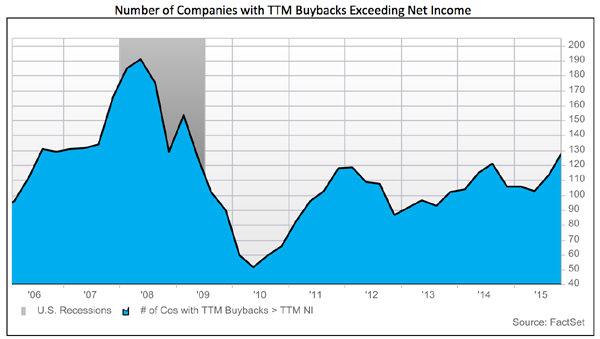 Last week I talked specifically about how high dividend payout ratio warnings show us which companies are paying out more than they can afford. It’s a good way to avoid dividend disasters. Likewise, when buybacks exceed profits, that’s not good either.

But there are some management teams who have recently displayed some prescient timing. Let’s talk about five.

Online travel company Expedia Inc (EXPE) was the best company last year in terms of buying its shares at their lows. Expedia bought shares last year at an average price of $69, whereas the average price during that period was $98.12 per share. That’s a whopping 29.7% discount.

During that same twelve trailing month (TTM) period, NRG Energy Inc (NRG) bought back its shares for an average discount of 21.3%. Their board bought at an average price of $19.63 while the market averaged $27.87 a share.

NRG is an electric utility company that produces and delivers energy domestically. While the firm has a current dividend of $0.58 that’s yielding 5.8%, their earnings for the last year were flat to negative depending upon your accounting approach. That’s not safe enough for me.

Mead Johnson Nutrition Co (MJN) produces nutrition products for infants and children in the form of formulas, milks, supplements and more. MJN is currently paying a $1.65 dividend that yields 2.42%.

The company bought back its stock over the TTM period at a discount of 18.1%.

If you know anyone that buys formula, you know that it’s expensive, and that once a child is on one brand pediatricians don’t recommend switching. Talk about a captive market. While 2.4% is nothing to sneeze at, I like my dividends a little fatter.

Micron Technology Inc. (MU) is another big winner when it comes to buying back its stock at a discount. Management bought back MU stock at a whopping 28.4% discount. The DRAM chipmaker has been the victim of a number of commodities cycles, and looks to be getting its books right finally. Unfortunately for an income guy like me, MU doesn’t pay a dividend.

Life insurer MetLife, Inc (MET) is another standout that does bring with it a larger degree of safety. In the last quarter, MET bought back its stock at an average price of $46.70 while the market average was $52.47. Their repurchase discount was an impressive 11% for the period, and a nice reversal for the company that had previously doubled its share count since mid-2008.

MetLife is currently paying a $1.50 dividend that yields 3.5%. The company has a secure and conservative dividend payout ratio of 28%. Moreover the shares of this staid insurer are trading as just 7.4 times forward earnings. But that could change.

Earlier this year MET announced that they were looking at restructuring and spinning off their retail U.S. business. The moves would allow them to separate the part of their business with higher capital requirements.

The company is doing this in conjunction with arguing its Federal Reserve SIFI designation (Systemically Important Financial Institution) on grounds that its businesses pose less systemic risk to the U.S financial system. SIFI designates have higher capital reserves and control requirements.

If the reorganization is successful the new company would be able to deliver higher returns to investors from its other business units which handle asset management, employee benefits, and represent about 80% of the company’s business.

Hedge fund managers like Ackman love buybacks, but I prefer stocks that pay dividends of 6% or better. Especially when they can consistently grow these payouts. Reason being, you can fake a buyback, but you can’t fake a dividend that’s funded by actual cash flow.

My three favorite dividend payers today dish respective yields of 7%, 7.7%, and 8.7%. And they’re all boosting their payouts yearly (even quarterly in one case).

With the major indexes off by more than 8% already this year and the 10-year treasury barely scraping 2%, I know it may sound a little crazy. But here’s the thing: the upside in this sector is backed by one of the biggest demographic shifts in history.

There’s a bull market unfolding right before our eyes as the Baby Boom generation gets older, and it’s going to run for the next two or three decades. Consider that:

And most investors haven’t heard of these companies yet, so prices could soar 15-20% in just the next 12 months as they pile into these reliable payers.