2 High Yield Stocks to Buy and 2 to Dump Immediately

If the market’s winter of discontent has a silver lining, it’s this: dividend yields have lurched skyward, while value measures such as price-to-earnings ratios have sunk.

Translation: now’s the time to snap up top-notch dividend-payers at fire sale prices.

But there’s a common mistake you must avoid at times like this: simply seeking out stocks with high yields and low P/E’s and thinking your job is done. That’s because many of these companies are “yield traps”: their earnings and cash flow can’t back up their hefty payouts.

When the inevitable dividend cut comes—dragging the share price down with it—these investors will be left holding a very empty bag.

To find the best bets for gains and rising income, you have to dig deeper.

With that in mind, I’ve zeroed in on four high-yield S&P 500 stocks: two strong buys and two to sell or avoid. Let’s take a look at them, starting with the riskier plays.

Frontier Communications Corp. (FTR) is a good example of a sky-high yield (9.2%) that should set off alarm bells. As for a low P/E, the “E” part of the equation is non-existent—the telco has posted losses in three of the last four quarters, and the Street forecasts a loss of $0.17 a share in 2016.

Add rising long-term debt (up 74% from a year ago as of the end of Q3) and a payout ratio that’s also headed in the wrong direction (81% of free cash flow, up from 67%) and you get a sense the dividend—which has barely budged since it was cut in 2011—is on borrowed time again.

FTR Hangs Up on Income-Seekers 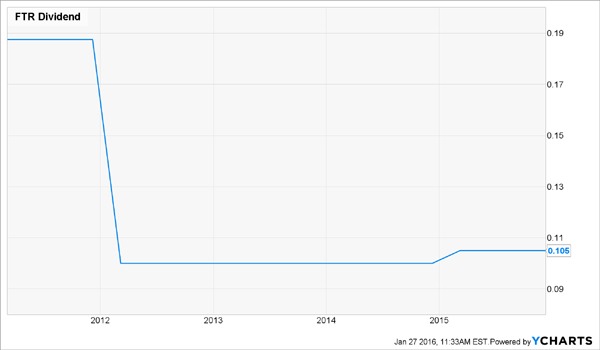 The deal will triple Frontier’s size, but I’m in no way convinced it has the financial muscle to strengthen this business. History isn’t on its side, either: when Frontier took over accounts in Connecticut from AT&T, Inc. (T), another dangerous dividend stock, it triggered a rash of service troubles that had complaint lines at consumer-protection agencies and state regulators ringing off the hook.

To be sure, IBM is in no danger of a dividend cut (it pays out just 33% of its earnings as dividends). And it’s true that earnings-per-share (EPS) have gained nearly 13% in the past five years—but that’s mainly due to IBM’s buyback program, which has slashed the number of shares outstanding by 20%. Overall net income has fallen almost 13% over the same time period, from $15.1 billion to $13.2 billion.

And over the last 12 months, the company bought back less than 2% of its outstanding shares. Why? Sales are in a nosedive: 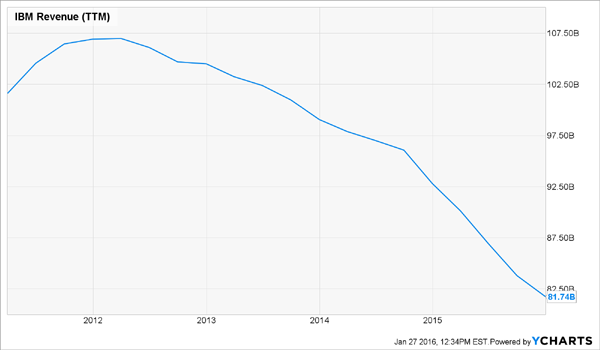 IBM is redeploying its shrinking profits toward saving its actual business. The company has fallen behind on the groundbreaking shifts toward cloud computing, data analytics, mobile and the Internet of Things.

Management is scrambling to make up for lost time, and there’s been progress: combined, these areas made up 35% of revenue in 2015, up from 27% in 2014. But IBM still has a tough climb ahead, and fleet-footed competitors like Amazon.com (AMZN), which controls 35% of the cloud market, won’t make it any easier.

The bottom line: There are better places than IBM for your money right now—like the two stocks we’ll examine next.

Southern Company (SO) has been paying dividends every year since Harry Truman was in the White House (1948, to be exact). In the last 36 years, it’s hiked its payout 180%, or about 5% annually, on average.

Today, the stock yields a high 4.5%, and that dividend is well supported by Southern’s earnings: its payout ratio stands at 82%, a reasonable level for a utility. It’s also down from 108% in the third quarter of 2013.

Southern supplies power to 4.4 million customers in four southeastern states. It has 46,000 megawatts of generating capacity.

The company’s heavy reliance on coal has been a big knock on investing in it in recent years. But it’s remedying that by spending more on renewables. It’s also in the process of buying natural gas distributor AGL Resources Inc. (GAS), which will cut its reliance on electricity, double its customer base and support its shift to gas-fired generation.

Southern got 40% of its power from coal in 2014, while gas chipped in another 40%. Nuclear and hydroelectric contributed the rest. But if natural gas prices stay low, management plans to shift that mix to 55% gas and 21% coal by 2020, helping Southern deal with tighter emission regulations.

The stock has also thrown back January’s market chaos, rising 3.9% during the month, leaving us with two key takeaways: utilities like Southern are a great way to add ballast to your portfolio in stormy markets, and the conventional wisdom that utilities underperform in times of rising interest rates is just plain wrong.

HCP, Inc. (HCP) should be on any income investor’s watch list, thanks to its 6.4% yield—nearly triple the S&P 500 average—and its sterling dividend record: the real estate investment trust has hiked its payout for 30 straight years.

It’s also the only REIT on the S&P 500 Dividend Aristocrats list, made up of companies that have raised their payouts annually for at least 25 years. 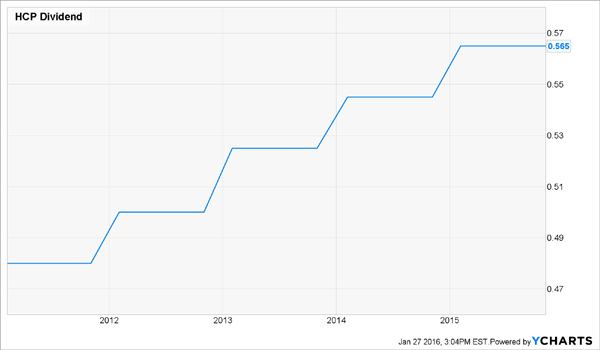 The streak is in no jeopardy: in Q3, HCP reported adjusted funds from operations (AFFO), a better measure of REIT performance than earnings, of $0.79 a share, up 5% year-over-year and easily covering the $0.565 quarterly dividend.

HCP owns senior-care facilities, medical offices, hospitals and labs across the US. The units have tumbled nearly 8% in the past month, swept under by the market plunge and the interest rate panic.

That’s served up a nice opportunity for long-term investors to lock in that high yield. HCP pays 20% more than fellow healthcare REITs Ventas, Inc. (VTR), at 5.4%, and Welltower Inc. (HCN), at 5.4%.

In the background is the biggest demographic shift in US history: the aging of America’s 77 million baby boomers—10,000 of which turn 65 every day—which will send demand for HCP’s properties soaring.

In fact, that very same trend is fueling a fat 7.5% yield at another healthcare REIT I like even better than HCP.

Like HCP, this REIT’s core business should boom for the next 30 years, at least, thanks to the bull market in aging Americans. That’s why I fully expect its payout to double in the next decade. But unlike HCP, few investors have ever heard of it.

But that’s starting to change, and I expect this REIT’s share price to soar 15% to 20% as income-starved investors pile into this reliable dividend-payer.

You do not want to miss out on this one. Click here for this company’s name and ticker—and the backstory on two more high-yielding healthcare picks I love for 2016.