Do you remember the biggest threat to the stock market in the summer of 2017?

Let me refresh your memory: a nuclear war with North Korea.

It was barely a year ago, but financial pundits and so-called experts were screaming from the rooftops about volatility spiking with the risk of a nuclear war. Here’s what actually happened as Armageddon fears fizzled: 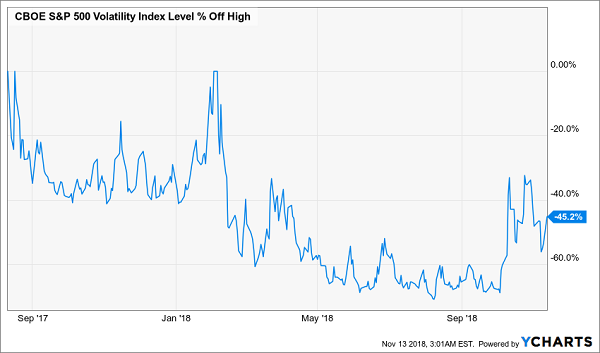 So much for heightened fears! In fact, despite unusually large spikes in volatility earlier this year, as a whole, this measure of market fears has been on a steady decline.

Oh, and those spikes in volatility you see earlier this year were because of a new risk du jour. Mutually assured destruction through a nuclear exchange is yesterday’s news—now the big risk is tariffs and the trade war with China, which drove the volatility spike you see in February.

And that risk is rapidly disappearing.

Of the S&P 500 companies that have reported earnings for the third quarter, 138 mentioned tariffs in any context at all, down from the 157 that mentioned them in the second quarter:

Tariff Chatter on the Wane 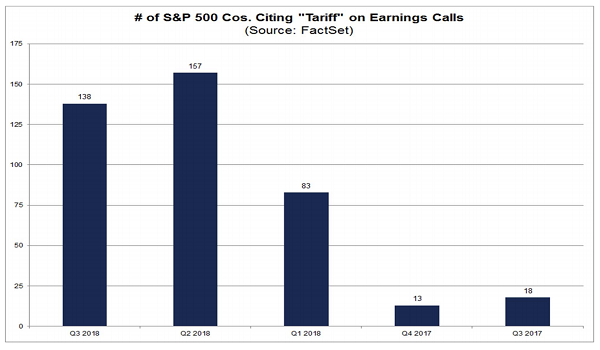 Keep in mind this is just references to tariffs—and also keep in mind that management loves to point the finger at anything outside their control if they have a bad quarter, and tariffs are a great distraction. But they aren’t leaning into that distraction as much as they used to, because tariffs are old news.

We haven’t seen them affect GDP growth enough to be worrisome, and that should surprise no one. The 10% tariffs are on $200 billion worth of goods—translating into an extra cost to Americans in the form of higher prices of about $20 billion. And since the country’s annual GDP is set to reach nearly $20 trillion in 2018, that means the tariffs affect a whopping 0.1% of the country’s total economy.

Of course, that means anyone who sold off because of tariff fears made a huge mistake—and that’s obvious in the numbers. Even after the recent volatility, anyone who sold stocks because of fears that a trade war would result in economic disaster has missed out on 7.3% returns in less than a year:

Strong Gains Despite the Hysteria 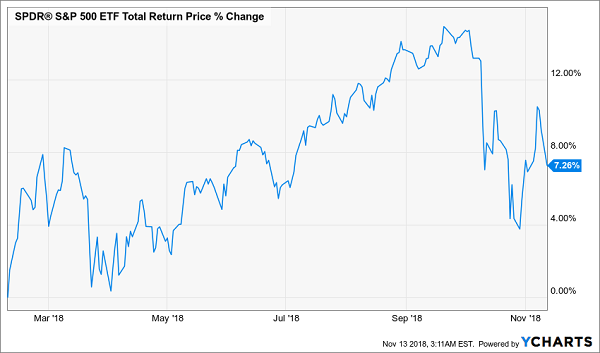 Now that stocks have sold off in a temporary correction (an unsurprising turn of events after soaring 15% in just 7 months!), anyone who made the mistake of selling out on political fears and overblown alarmist headlines has a chance to fix their mistake and dive in.

And there’s a way you can not only buy in but compound your potential returns from the recent selloff: that’s with actively managed closed-end funds (CEFs).

Some CEFs that hold S&P 500 companies are trading at tremendous discounts, despite holding excellent stocks. Oh, and these funds pay much higher dividends than the 1.9% you’d get from the benchmark SPDR S&P 500 ETF (SPY), meaning you can rely on them for income while the market rebounds. 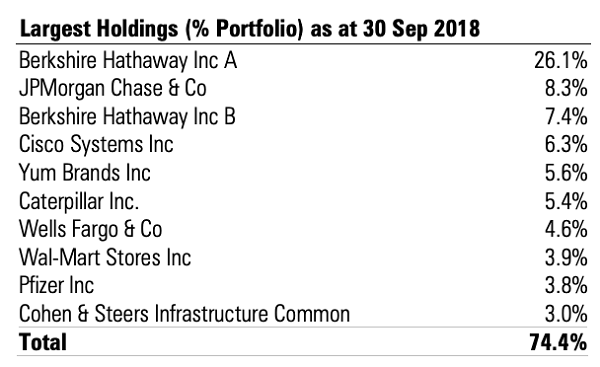 Despite this excellent portfolio, BIF has a 17.4% discount to its NAV, even though its NAV has been growing faster than the S&P 500:

Beating the Market Despite the Discount 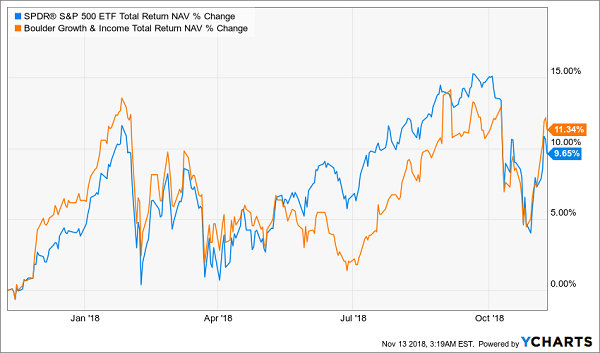 Of course, some folks might take a pass on BIF when they can get a very generous 9.8% payout from a CEF like the Eaton Vance Risk-Managed Diversified Equity Income Fund (ETJ). Fair enough! 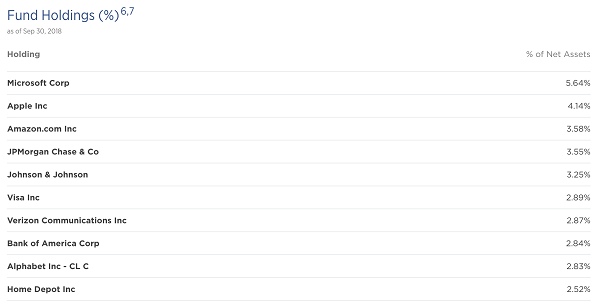 The catch? The discount to NAV here is much smaller than that of BIF—just 3.7%. But that’s not too surprising considering the generous dividends shareholders are getting—which may make this fund a good complement to BIF in a diversified CEF portfolio.

Let’s go with a third one to round things up. How about the Madison Covered Call & Equity Strategy Fund (MCN)?

This is a very small and often-overlooked fund (it’s got just $157 million in assets under management, making it a fraction the size of the multi-billion-dollar ETFs that get so much attention) that gives investors a huge 9.7% dividend yield. This fund trades at a 2.8% discount to NAV and, in addition to a variety of solid value stocks, has a fair amount of gold and mining stocks as an inflation hedge: 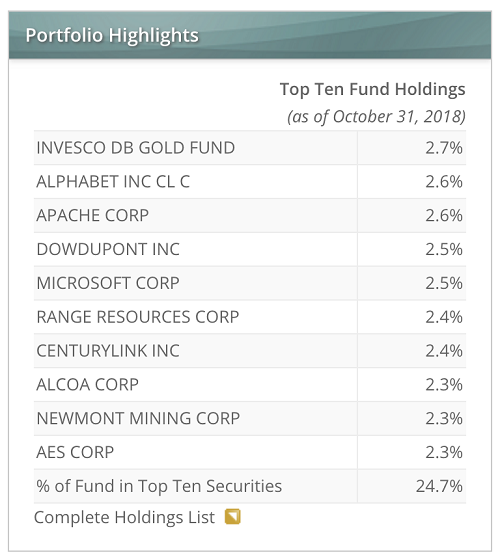 For a conservative investor who’s concerned about rising interest rates but still wants to cash in on the record earnings growth companies have seen in 2018, MCN is an attractive option. Combine it with BIF and ETJ and you have a solid all-around portfolio that gets you in the game while giving you an income stream most stock investors could only dream about.

I think it’s very clear that a steady 8%+ cash dividend backed by a rock-solid human management team is exactly what you need to bank big gains in today’s market.

And I’ve got even better news for you: in addition to the 3 solid choices above, I’ve got 5 MORE funds also delivering BIG dividends (I’m talking 8%+ cash payouts here) and upside, thanks to their ridiculous discounts to NAV.

Take my No. 1 pick right now, which pays a hefty 8.1% CASH dividend and has absolutely demolished the market since inception: 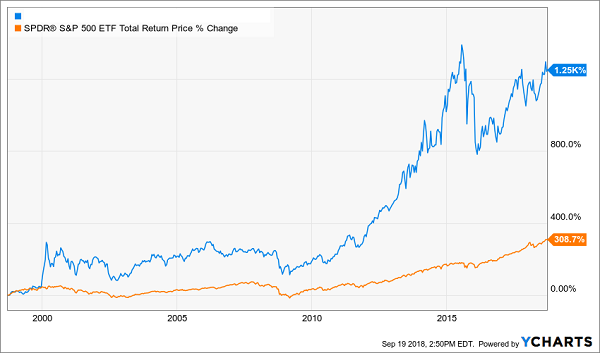 Yet despite that incredible run, this funds trades at a 4% discount to NAV as I write! That may not sound like much of a markdown, but this unsung dividend star has traded at fat premiums to NAV many times in the past.

It’s only a matter of time before its premium returns, and when it does, it will catapult us to fast 20%+ upside, on top of our massive 8% dividend!

Let’s grab a position in this winner and the 4 other bargain-basement CEFs I have for you now, so we can start enjoying their 8%+ cash streams just ahead of their next big rise.

All you have to do is click here to get ALL my research now—names, tickers and my complete analysis of all 5 of these funds. Don’t miss out!