Blackstone Wants In On Data Center REITS, You Should Too

The explosion in data usage in recent years has led to good fortunes for Data Center REITs such as Equinix (EQIX) and Digital Realty (DLR). Even Blackrock decided that now was the time to invest in data centers, buying out QTS Realty (QTS) for a big premium last month.

Some investors might think the easy money has been made, but I’m here to say that the trends in data usage should lead to both strong capital returns and attractive dividend growth for the foreseeable future.

The data explosion has been one of the more long-lasting secular trends in recent history and a big reason for the move by Blackstone in acquiring QTS.

Every single business nowadays is taking steps to move their businesses online. This transformation from physical to digital requires the use of more and more data—which is a big boon for the Data Centers of the world.

According to IDC Research, 49% of the world’s stored data will reside in public cloud environments by 2025.

“There is no alternative to digital transformation; Those that don’t adapt will fail”
Jeff Bezos – Founder, Chairman of Amazon

Blackstone even noted that it is buying QTS in its ‘perpetual’ investment vehicles—meaning that this isn’t the typical private equity deal where they get in and look for a two to three-year flip.

They bought QTS to hold into perpetuity, meaning that they have a lot of confidence in the long-term potential of this industry.

“We are focused on investing in assets that are benefiting from strong, secular tailwinds, such as the rapid digitalization of data. QTS is a leading provider of data center solutions with a portfolio of high-quality assets in desirable markets, positioning it well to capitalize on these powerful trends in the data center space.”
-Tyler Henritze, Head of Acquisitions Americas for Blackstone Real Estate.

From a consumer standpoint, think about everything that you do on your phone and on your laptop–nearly everything is now executed or stored in the cloud.

While you might think of the cloud as some blue and white fluffy thing in the sky, it’s actually a bit more complex than that. Here’s a view of a Google data center that helps safely store and serve all that data that you put on the cloud.

It is the data center REITS such as QTS and Equinix or Digital Realty which have been ramping up investments into new data center facilities for years—to help build out the infrastructure needed to store all this data.

Big cloud players like Google (GOOG), Amazon (AMZN), and Microsoft (MSFT) can leverage these facilities to help deliver cloud services to the masses.

So what does this mean for investors? If Blackstone, THE largest Private Equity player in the world thinks that Data Centers should be owned in perpetuity—we should probably be listening.

So how do we capitalize on these trends?

First, I’ll note that you’re not going to get fat juicy yields from Data Center REITs—the average across the five publicly-traded REITs is now sitting at 2.7%. But, the stocks have shown strong capital appreciation and solid dividend growth over the last five years, and I think these trends can continue.

If you want to take advantage of the proliferation of data and want a stable play—I’d opt for Equinix (EQIX). Equinix (blue line in the chart below) could be considered the granddaddy of the Data REIT market—it is the largest, at a $77 Billion market cap, and has been the top performer over the past three years. 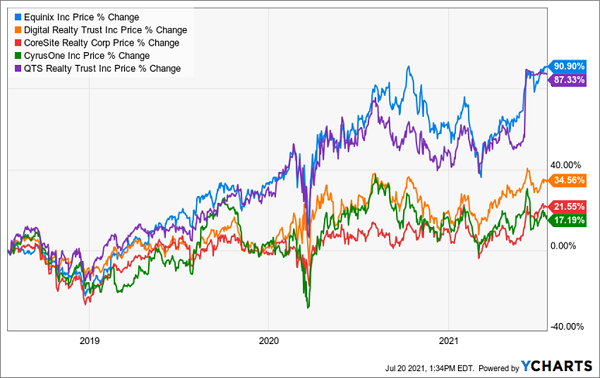 EQIX doesn’t have a great yield (only 1.4%) but has a best-in-class management team, with one of the strongest balance sheets in the space and the strongest earnings growth compared to its peers. In addition, it has provided 64% dividend growth over the past five years (see chart below). Its customers include cloud giants such as Google (GOOGL) and Amazon (AMZN). 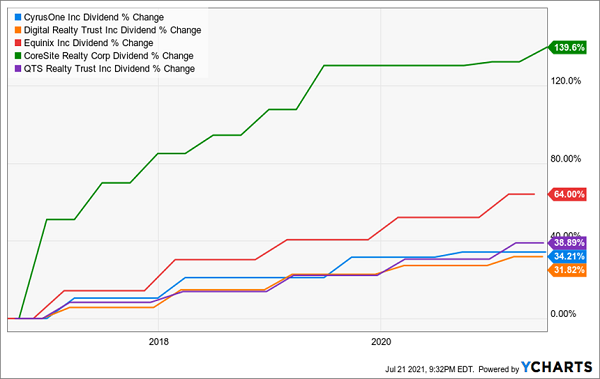 Digital Realty (DLR) is also a great high-quality choice for potential growth and income and is the second-largest Data Center REIT in the space. It offers the second-best dividend yield among the group at near 3% and has an equally strong balance sheet and expectations of high single-digit growth. 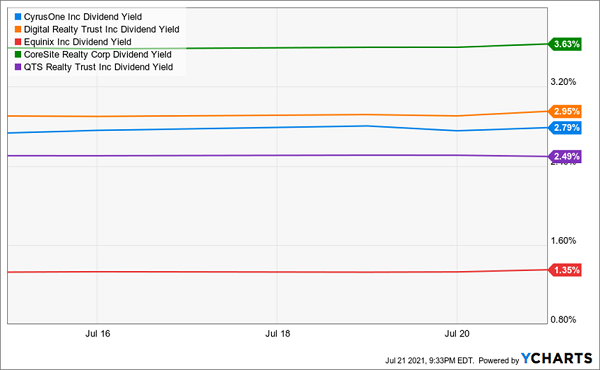 Its dividend hasn’t grown at quite the same level as EQIX, but with customers such as Facebook (FB), IBM (IBM), LinkedIn, Comcast (CMSCA), and Verizon (VZ) it should be considered a solid choice with good long term growth potential.

Usually in any industry, once you start to see one player (such as QTS) acquired, there are typically others that follow.

From 2015 to 2019, there has been one major Data Center REIT acquired every year.

Overall the price tag on acquisitions has been fairly consistent. The average of the last six transactions has been $5.5 Billion, with a range from $2 to $10 Billion.

And Digital Realty, the other behemoth in the space (behind Equinix) has been highly acquisitive, making four of the last six public buyouts.

Thus, the likelihood of DLR or EQIX getting taken over is probably slim. It would take a nearly $100 Billion buyout to takeout EQIX or $60+ Billion for DLR, something I can’t quite envision at the moment.

However, there are two other players that fit fairly close to that Mid-Cap sweet spot where acquisitions in the Digital REIT space typically take place—CyrusOne (CONE) and CoreSite (COR).

CyrusOne (CONE): There has long been fervent speculation that CONE could put itself up for sale. And now, with the company trading at a rough 25% discount to peers in the space, it might finally be that the time that a buyer steps in to provide shareholders with significant upside to current trading levels. Wells Fargo analysts think a CONE acquisition might happen at $90 per share, representing over 20% upside.

CoreSite Realty (COR) trades in line with industry multiples, so not trading at quite the same discount as CONE, but has better growth prospects, and what some would consider ‘crown jewel’ assets. In addition, it has provided the best dividend growth of the entire Data Center REIT space, with nearly 140% growth. Oh, and by the way it has the highest yield in the space at 3.6%.

And then there’s DigitalBridge (DBRG), which is what I would classify as the turnaround play of the group. DBRG is the old Colony Capital, which has been a bit of a headache for investors. They have worked to shed nearly all of their old hospitality properties and have a CEO intently focused on driving growth from a portfolio of digital-based assets. It recently halted any dividend payments, so I’d only consider this one if you are looking for a more speculative turnaround play. 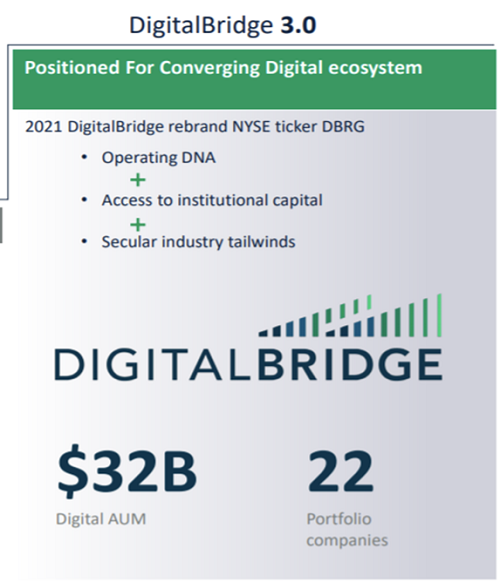 High-Quality Digital REITS like EQIX and DLR are exactly the type of “recession-proof” stock that we focus on in our Hidden Yields research service. We buy dividend stocks that can easily double, thanks to underappreciated catalysts such as higher interest rates, profits, and a dividend “magnet” that is due to pull the share price higher.

Whether it’s a bull market or a bear, we honestly don’t care. Worse case, these dividend doubles “only” return 15% per year, every single year. Click here to get our favorite 7 Hidden Yield stocks today.