Ditch These 5 REIT Duds, Grab This Bargain-Priced Pair Instead

Real estate investment trusts (REITs) are one of the market’s best sources of high yield. But they can also be one of its searing sources of heartburn.

For your sanity’s sake, and for the good of your retirement savings, avoid the five high-yielding REITs I’m going to warn you about today. Then reinvest that money into the sure-fire 8% yielders I’ll highlight after that.

REITs are set up, by design, to be income powerhouses. That’s the deal. They get to evade Uncle Sam, and in return, they have to funnel the lion’s share of their profits to shareholders. But a mandate only goes so far – if a REIT has less cash to redistribute, simple math says you and I suffer.

My latest warning tale comes from up north, where Boardwalk REIT (BOWFF) – an apartment owner across Alberta, Ontario and Quebec, among other provinces – pulled the rug out from underneath its shareholders.

Boardwalk was a safe bet for some time, making more than 150 consecutive monthly distributions since its 2004 IPO. However, the company’s profitability suffered amid a nearly two-year economic downturn in Alberta, and its funds from operations (FFO) dipped so far that they weren’t keeping up with the dividend payments.

Investors who had been paying attention were already heading for the exits.

Boardwalk’s Troubles Were No Secret 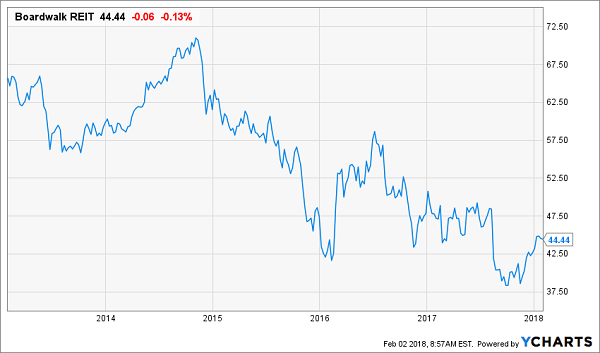 But buy-and-holders thinking Boardwalk was safe had their illusion dashed in November 2017 by a 56% cut to that monthly dividend.

A not-so-gentle reminder that not every REIT dividend is safe. It pays to be persnickety. That means cutting out losers like the five 5%-11% yielders below … and going all in on the two quality 8% yielders that follow.

AGNC Investment Corp. (AGNC) is one of the largest and most established mortgage real estate investment trusts (mREITs). It invests primarily in agency mortgage-backed securities, which are issued by government-sponsored groups such as Fannie Mae or Freddie Mac. It usually finances these through “repurchase agreements,” which are short-term secured loans.

To its credit, AGNC performed decently in 2017. The company ran off roughly 11% price gains, and combined with its substantial dividend, delivered nearly 24% in total returns.

That’s still no better than the Dow’s 28%-plus in total returns, but it’s a performance no investor would cry about.

But did things really get all that better over the past year?

Meanwhile, the company continues to crank up its tangible net book value “at risk” leverage ratio to 8.1 – up from 7.7 when I last discussed the stock in mid-April 2017. (And for all its success in 2017, shares actually are off 9% since my update.) That’s a level of leverage that far outpaces most of its competition. Worse, that leverage was in part jacked up to help finance AGNC’s purchase of its external manager, American Capital Mortgage Management.

By the way, to better finance the deal, AGNC clipped its monthly dividend from 20 cents per share to 18 cents – a move that came not far removed from another payout reduction in 2015.

AGNC performed admirably across the whole of 2017, but shares are headed back to a drab reality. 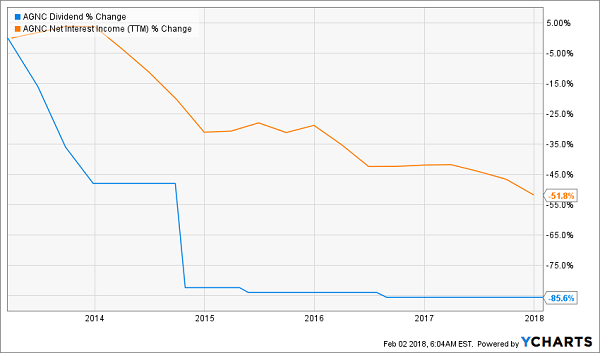 Back in October 2014, a REIT by the name of American Realty Capital was pummeled after the company revealed that it had previously released financial statements exaggerating its FFO and downplaying its red ink on the bottom line.

This led to investigations by both the FBI and SEC, and an eventual rebranding to a new name, VEREIT (VER), in mid-2015.

VEREIT, of course, does the same thing American Realty Capital did – it’s just hoping to do it a little more honestly. VEREIT is a net-lease, single-tenant REIT whose real estate houses restaurants, manufacturers, grocers and companies across other industries. Tenants include Walgreens (WBA), Dollar General (DG) and FedEx (FDX), but most notably, the company has a large 6.8% of its portfolio dedicated to struggling Red Lobster restaurants – a position that it has been selling back to Golden Gate Capital for a couple of years.

The company does have a couple things going for it, including chipping away at its debt and, in the third quarter, upping its adjusted FFO guidance. Still, the company is building an impressive streak of quarterly AFFO/share declines, including a 4% dip in Q3 that was fueled by an 8% top-line retreat. Most worrying of all is that the company’s dividend has been stagnant since its 2015 rebranding, remaining at 13.75 cents quarterly in perpetuity.

Shares have dipped by about 15% over the past year, and currently is mired in a strong downtrend along with the rest of the REIT community as interest rates climb higher. Thus, a dead-cat bounce could be in the offing, but don’t believe in any short-term recovery unless it’s accompanied by a lot more in the way of operational improvement.

I panned small New York City-based Alexander’s (ALX) back in September, so it’s about time for a check-in. How’s it going, Alex? 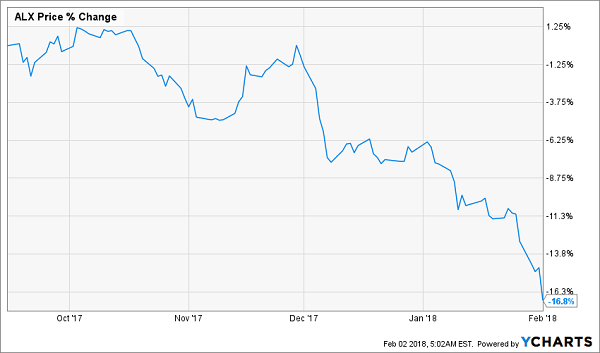 A refresher: Alexander’s once was a prominent NYC department store chain that thrived in the middle of last century. However, it faded from relevancy in the 1970s and 1980s before eventually being forced into bankruptcy in 1992. It reorganized as a real estate investment trust and sold off some of its properties.

From 10,000 feet, it’s hard not to love any company that holds real estate in New York City – one of the most expensive-rent cities on the planet. But Alexander’s really hasn’t done much with its portfolio, and in fact has shrunk from seven retail and office properties when I last discussed the REIT to six. Meanwhile, net income across nine months of 2017 was $62.6 million, off a little more than 3% year-over-year. FFO slipped a similar amount over that time.

In fact, the only real improvement to note in ALX shares over the past few months is that its price-to-FFO has slipped from 18.7 down to 15.5. But while the stock certainly is cheaper than it was, heed Warren Buffett’s words: Price is what you pay, but value is what you get. Alexander’s isn’t giving investors much at the moment.

As I discussed with AGNC, mREITs really started to punch back over the past year or so. In fact, according to global REIT representative Nareit, their collective average 19.8% total return was the best among all REIT types in 2017.

Congratulations, but it’s not all gravy.

For one, the roughly 19% returns of both the VanEck Vectors Mortgage REIT Income ETF (MORT) and iShares Mortgage Real Estate Capped ETF (REM) still managed to lag the market, as the S&P 500 and its measly sub-2% dividend managed to churn out a 21.8% total return.

Also, it’s becoming increasingly clear that not much is going to change at the Federal Reserve as outgoing chair Janet Yellen passes the baton to Jerome Powell. Yes, the Fed kept interest rates steady in January, but Powell has no qualms with raising rates, and in fact, the market is pricing in two if not three hikes in 2018. (The Federal Reserve has bumped the Fed funds rate five times since December 2015.) That’s becoming an increasing drag on these ETFs, which have declined 6%-7% in the first month of 2018 versus continued gains for the broader market.

mREITs and the Market Have Uncoupled 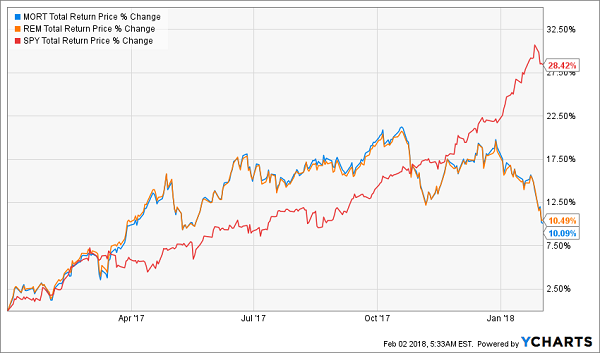 And again, I can’t stress this enough: Funds can, at times, be the right way to approach a sector or industry, but sometimes a group of losers can weigh down the few winners in the space. That has been the case for MORT and REM through much of their publicly traded lives.

No, if you want safe and steady REIT returns, your path lies in individual picks, with the very best backed by unstoppable megatrends that will send dividends (and capital gains) soaring over the the long-term.

For example, one of my favorite REITs at the moment recently raised its dividend again by 4% over last quarter’s payout. This marks the 22nd consecutive quarterly dividend hike for the firm: 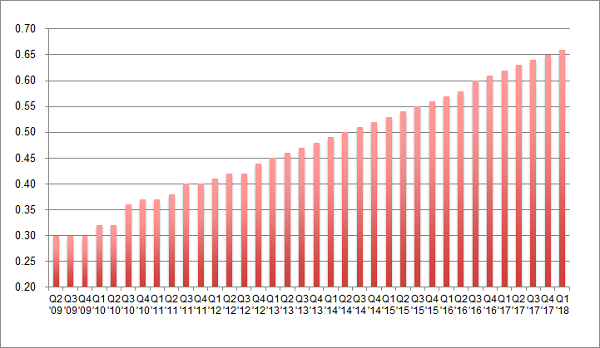 It pays an 9.7% yield today – but that’s actually an 10.1% forward yield when you consider we’re going to see four more dividend increases over the next year. And the stock is trading for less than 10-times funds from operations (FFO). Pretty cheap.

However, I expect its valuation and stock price will rise by 20% over the next 12 months as more money comes stampeding into its REIT sector – which makes right now the best time to buy and secure an 8.5% forward yield.

Same for another REIT favorite of mine, a 7.2% payer backed by an unstoppable demographic trend that will deliver growing dividends for the next 30 years.

The firm’s investors have enjoyed 68% total returns over the last five years (with much of that coming back as cash dividends.) And right now is actually a better time than ever to buy because its growing base of assets is generating higher and higher cash flows, powering an accelerating dividend: 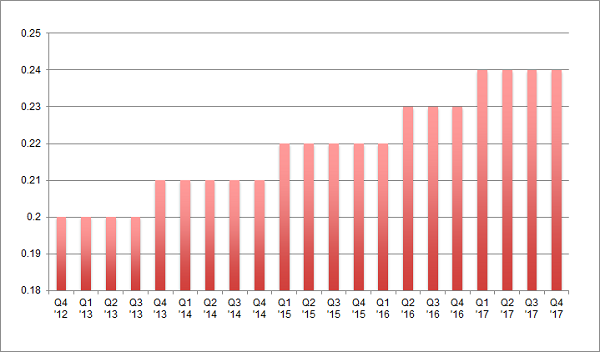 Remember, there’s never been a better time to buy REITs and live off their dividends. But it’s important to choose wisely. Retail REITs are dangerous, while other recession-proof issues are bargains. I’d love to share the latter with you – including specific stock names, tickers and buy prices. Click here and I’ll send you my full 8% No Withdrawal Portfolio research to you right now.