Well, it took seven months. We finally have some serious dividends!

Are they all buys? Of course not. But why not take our calculated contrarian chances with real income stocks, rather than wasting our time with mainstream ideas?

While we are considering payout plays like these, vanilla income investors are stuck with:

We simply need more—much more. My recommendation for years has been a 7% baseline, which would generate $70,000 annually if you had $1,000,000 to put to work, but still a fair amount of income generated from a more modest nest egg. 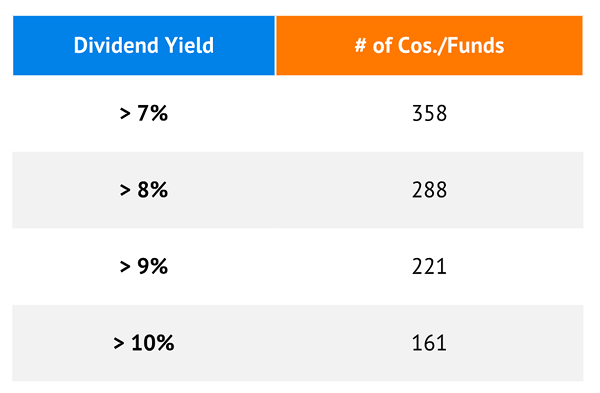 Fourteen percent, of course, is twice as good as 7%. And as I mentioned we have a fabulous 53 companies yielding 14% or more today.

Here’s the full list of 53 stocks paying more than 14% today:

Let’s be very clear, however. We don’t get something for nothing. TANSTAAFL.

In this high yield patch we need to do our homework. Let’s consider Diamond Hill Investment Group (DHIL, 14.7% yield). This investment management firm reported $31 billion in assets under management at the end of 2021. And cyclical as the business might be, it paid a regular dividend of $1 per share in 2021, which it raised to $1.50 per share in 2022.

Thing is, DHIL shares go for about $175 per pop at the moment, which comes out to a yield of about 3.4%. The missing 11.3 percentage points here came in the form of a special dividend of $19 per share.

Now Diamond Hill has been paying special dividends for years, far predating the regular dividend program, and those one-time payouts have been on the upswing. But they call it a “special” dividend for a reason—they’re not promised, and they can quickly be pulled away if the profits aren’t there. In this case, the base dividend of 3.4%, while decent, isn’t as spectacular as the headline number.

Moving on to Icahn Enterprises (IEP, 15.8%). Yes, Icahn, as in Carl Icahn. This is Icahn’s holding company, which operates across seven main business segments: investment, energy, automotive, food packaging, real estate, pharma and home fashion—it was eight as recently as 2021, but it exited the metals business. 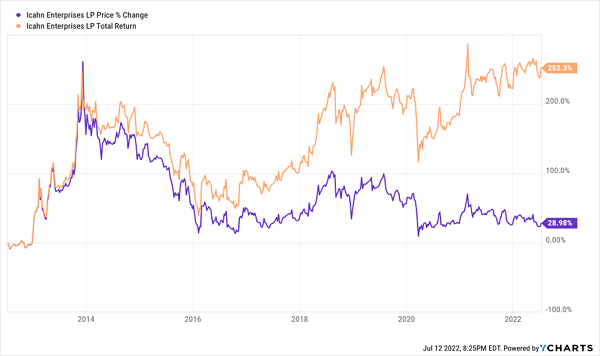 Bargain? Unclear. With Icahn, who knows which holdings will stick around, and for how long, and whether any additions will end up driving real value.

Newtek Business Services (NEWT, 15.7%) is an interesting business development company (BDC) that doesn’t want to be a BDC any longer. Remember: BDCs are similar to REITs in that they’re required to pay out at least 90% of their profits back to shareholders as dividends, hence their typically outsized distributions.

It announced in August 2021 that it was buying National Bank of New York City and planned to convert to a bank holding company. In fact, NEWT has already cut its dividend (from $1.05 per share in Q4 2021 to 65 cents in Q1, though up to 75 cents in Q2). Could it maintain a sky-high dividend? Sure, but it would be highly unusual. The SPDR S&P Regional Banking ETF (KRE), for context, currently offers 2.5%.

Point is, while the current yield is high, it’s difficult to project what you’ll actually get until Newtek begins operating as a bank.

How to Lock Up $76K in Annual Income

You can’t guess and hope your way to retirement riches. That’s why the most important thing to me is the sheer quality of each and every one of my portfolio holdings—and, of course, a high and durable level of dividends.

As I write, the stellar 13 stocks in my Contrarian Income Report portfolio yield an average 7.6%. This baker’s dozen is spinning off $76,000 for every million dollars invested. 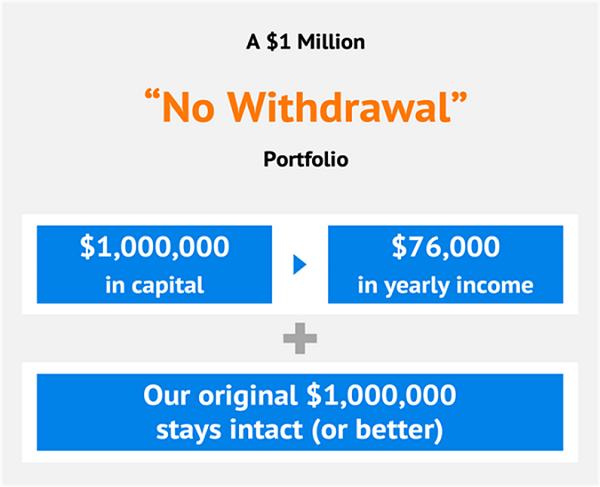 Not a bad cash companion!

The important thing is that these yields are safe, which creates stability for the stock (and fund) prices attached to them. We want our income, with our principal intact. It’s really the only way to retire comfortably, without having to stare at stock tickers all day, every day. Sound good?

Best of all, many of my favorite dividends are paid monthly. So, we’re talking about $3,000+ in dividends every month on that $500K. Or $6,000+ per month in income on the seven-figure accounts that Fidelity brags about in its ads.