Exposed: The 6% Dividend The IRS Doesn’t Want You to Buy

This levitating market just might have you thinking there are no more cheap 6%+ dividends out there.

Well, don’t worry, because there certainly are—particularly if you fish in the obscure pool of funds we’re going to dive into today.

It boasts plenty of big payouts of 6% and more. But most folks don’t even consider it, for two reasons:

I’m talking about closed-end funds (CEFs) that own municipal bonds. This is an unusual corner of the market, to be sure, but a great place to hunt down cheap dividends above the 5% mark (and often 6% or even higher).

And I say muni-bond CEFs’ yields are higher than they appear because they’re often tax-free for Americans. So if you buy a muni-bond CEF with a stated yield of 4.8%, like the one I’ll name in a second, that payout could easily be worth 6% or more to you, depending on your tax bracket.

Unfortunately, these “hidden” yields have found their way onto the mainstream radar. Check out the big run the normally sleepy muni-fund market has put on this year: 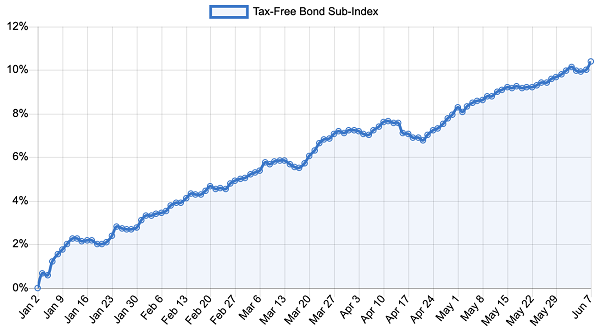 Such a huge run could make you worry that time is up for muni-bond CEFs, especially with the benchmark iShares National Municipal Bond ETF (MUB) up just 4.6% over the same period.

And it’s true that the average muni-bond CEFs’ net asset value (NAV, or the value of the muni bonds each fund holds) has gone even higher, at 6.5% year to date. That brings us back to the market-price return you see above, which has spiked some 11.5%, nearly twice the rise in NAV.

All of this means that the discount to NAV, a key valuation measure for CEFs of all kinds, has been slowly vanishing. So yes, the bargains in muni-bond CEFs aren’t as plentiful as they were a few months back.

This run makes it easy to spot the remaining bargains—and right now there’s just one muni-bond CEF (out of 149) with a market-price return over one percent smaller than its NAV return, making it the obvious buy for the aggressive muni-bond fund investor.

Your Last Best Shot at a 6%+ Muni-Bond Dividends

That fund is the BlackRock MuniHoldings Investment Quality Fund (MFL), an old, established fund (launched in 1997) managed by the world’s largest bond company: BlackRock, whose $6.5 trillion in assets under management have made it the biggest force in the bond markets. BlackRock is so massive that entire countries have liaisons dedicated convincing the company to buy their bonds.

And BlackRock’s muni-bond funds have an impressive record, with MFL being a typical example. Since the launch of the muni-bond index fund—MUB—MFL has crushed the index:

Way Ahead of the Market 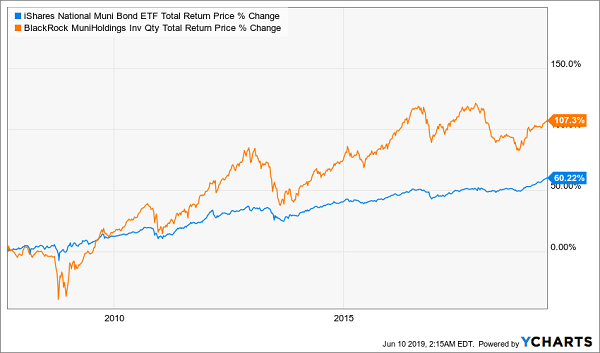 That’s par for the course. As you can see, MFL has steadily climbed since inception: 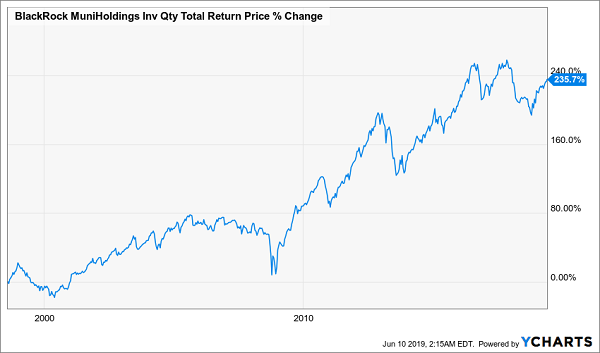 Few investors realize how inefficient the muni-bond market is. Unlike equities, which trade frequently on open markets, municipal bonds’ details aren’t well-known, and they’re less frequently traded. That’s because companies like BlackRock buy the best ones first (since brokers go to these big players first to sell what they can) and hold on to them until they expire.

In other words, this is not a market where small fry can compete with the big fish. That’s why muni-bond funds tend to crush the index, just as MFL has for years.

Yet MFL hasn’t gotten the respect it deserves, resulting in a 9.9% discount to NAV—much bigger than its average 4.4% discount.

And MFL hasn’t been slouching on the job, either: its 6.7% total NAV return is in line with the average 6.5% total NAV return across all muni-bond CEFs. But while investors have bid up those other bond CEFs’ market prices by double digits, MFL has slipped through the cracks, as you can see in blue below: 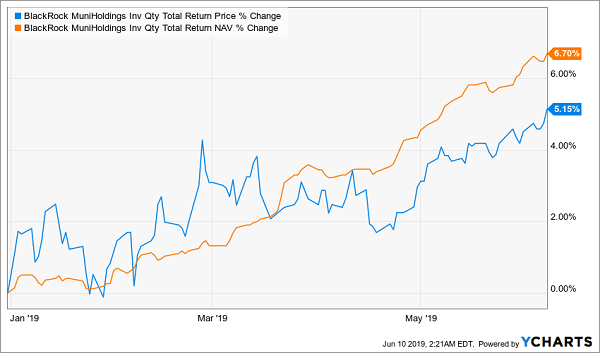 MFL’s 4.8% tax-free income stream is bigger than the 4.3% yield on the average muni-bond CEF, and it’s light years ahead of MUB’s 2.6%. So this isn’t just an outperformer, it’s a big yielder, yet it trades at a massive 9.9% discount. That’s why you should take a look at MFL now, before investors realize they’ve bypassed this fund in their rush into muni bonds.

MFL’s 9.9% discount is great, but my favorite muni-bond CEF is even more overlooked. This fund pays almost exactly the same yield as MFL (and yes, it’s still tax-free). But there’s a twist: my pick is even cheaper, at a full 11% discount!

We’re set up for a quick 7% price gain as that discount slingshots back to its normal level. And I’m expecting that gain to grow even further—into the mid-double digits—as investors realize that, as with MFL, they’ve missed this (tax-free) income stream and pile in.

This kind of fast return is unheard of in the sleepy world of muni bonds—and it’s why I’m pounding the table on this fund today.

How to Get My Best Muni-Bond CEF Pick Now

I just released the full story of this off-the-radar muni-bond fund to members of my CEF Insider service. And now I’m ready to share it with you, too.

All you have to do is click here to take a no-obligation trial to CEF Insider. That gets you VIP access to my latest issue (which dropped just days ago). It gives you everything you need to know about this stout income play before you buy.

Plus, your trial also gives you the next CEF Insider issue—with yet another brand new 7%+ yielding CEF pick—when it comes out just a couple weeks from now, at the end of June.

I’ll start by showing you my top 4 picks from across the CEF space. Right now, these 4 income dynamos pay a sky-high 8.7% average dividend! These 4 funds are my favorite investments for keeping your portfolio’s volatility low while paying you generous dividends (an incredible 10.7%, in the case of one of these 4 CEFs).

And you’re about to get the full story on each of them.

Click here to discover these 4 funds for yourself and grab the latest CEF Insider, with full details—name, ticker symbol, buy-under price and more—on that ultra-stable 5%-paying (but really closer to 8%) muni-bond CEF I just mentioned.