How to Buy Tomorrow’s Dividend Aristocrats at a Discount Today

The blue-chip corporations that make up the Dividend Aristocrats are a tribute to the power of dividends. They have raised their payouts for 25 straight years or more and, most importantly, made many of their investors quite wealthy in the process.

Unfortunately for us, everyone already knows these firms are great. And as a result, their stocks are now overpriced and these well-run firms are producing mere also-ran returns. Check out the purple line below, which shows the Aristocrats trailing the popular Dow Jones and S&P 500 indices:

The Aristocrats Even Make the 124-Year-Old Dow Look Spry! 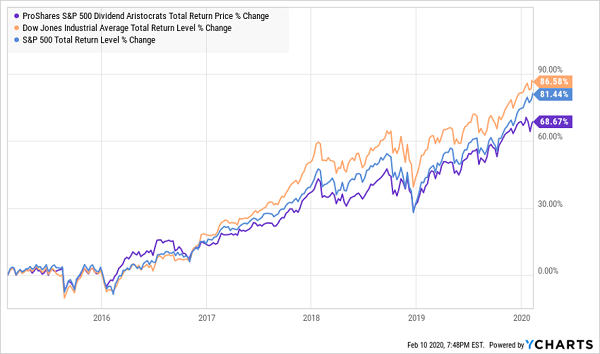 We can do better, and I’ll show you how in a moment. First, let’s break down why these stocks underperform so that we can avoid this success trap. The “payout coronation process” looks like this:

That’s where we are at today with “old school” Aristocrats Coca-Cola (KO) and Emerson Electric (EMR). 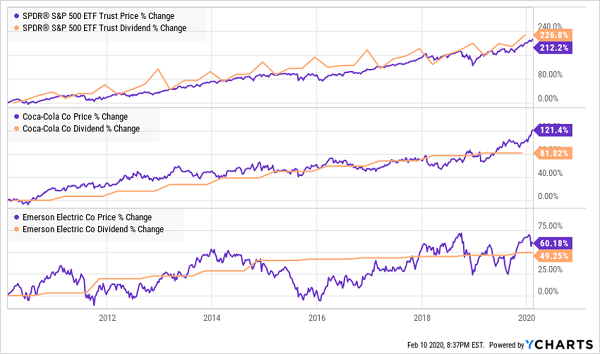 Of course we can solve this problem by buying tomorrow’s Dividend Aristocrats today. In doing so, we are buying better growth prospects at a bargain. Here are three stocks that are shoe-ins to join this exclusive payout club in eight years or less. This means the best time to consider them is right now, before the broader income investing herd comes rumbling towards these shares.

You likely know Lockheed Martin (LMT) for its scores of defense products, such as Sikorsky helicopters (including the Black Hawk) and Trident ballistic missiles. But it’s so much more, from surveillance drones to WindTracer light detection and ranging (LIDAR) to meteorological instrumentation.

Lockheed has done everything you could ask of a defense contractor when the U.S. budget tipped in your favor. It has put together several years of unchecked revenue growth and profits that, with the exception of a rough 2017, have been heading upward since 2011. 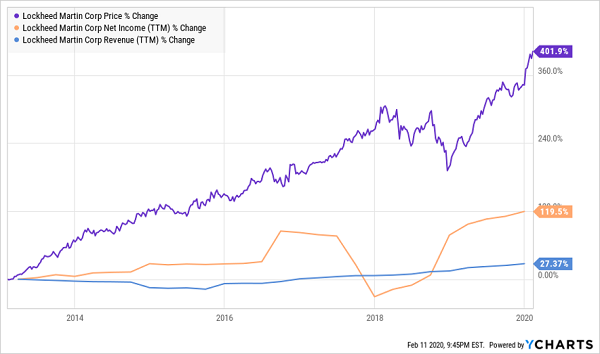 LMT started paying out a 17.5-cent cash distribution in 1995, raised it a couple times, then held it mostly steady until 2003, when it started its current string of 17 consecutive annual payout increases. And Lockheed’s still going at a strong rate of nearly 10% annually over the past half a decade, which is the rate you need for a dividend doubler every seven years.

Better still, as I recently discussed, this stock checks off the increasingly important “quality” factor.

My only concern right now is valuation. You can clearly see that LMT is starting to “go vertical,” and stocks typically need to digest these kind of moves. Its forward P/E of 17 isn’t high compared to the market, but it is high compared to its own historical norms. It trades at a price/earnings-to-growth (PEG) ratio of 2; anything more than 1 is considered expensive.

But Its Stock Price Has “Run Away” From Its Dividend 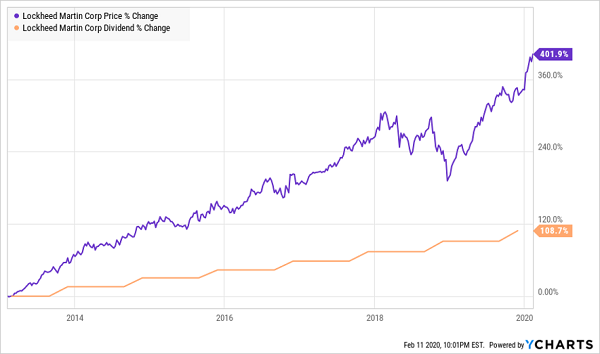 And as you can see from the chart above, the price is really getting away from its long-term dividend growth, generous as it might be.

Lockheed clearly is in a bullish long-term trend, and deservedly so as business is booming. However, the hot price may be too hot at the moment.

Microchip Technology (MCHP) produces the building blocks of technology: analog and mixed-signal chips, microcontrollers, radio frequency devices. And these products have an extremely wide range of use–the company lists dozens of industries it serves, ranging from defense to Ethernet to home security to LCD displays.

More importantly, its products are used in growth industries such as wireless connectivity and the Internet of Things (IoT).

Revenues have been growing for seven consecutive years, including a massive step up for the year ended March 2019, which saw sales jump 34%. But the current year looks like a “reset”; analysts are projecting a top-line contraction before rebounding in the upcoming fiscal year.

Profits, on the other hand, are quite turbulent from year-to-year: 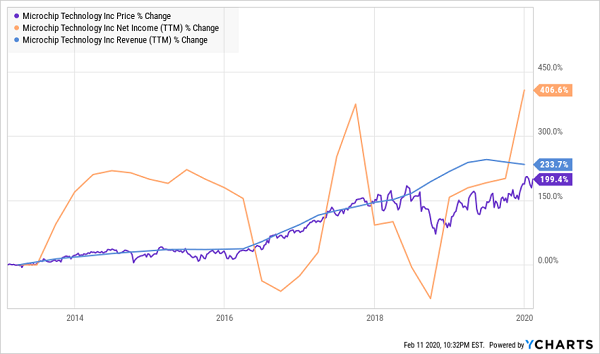 Now MCHP has extremely conservative management that, while improving the payout every quarter, does so by microscopic slivers. Its last payout hike took the dividend from 36.65 cents per share to 36.70 cents. In other words, a mere 20th of a penny. 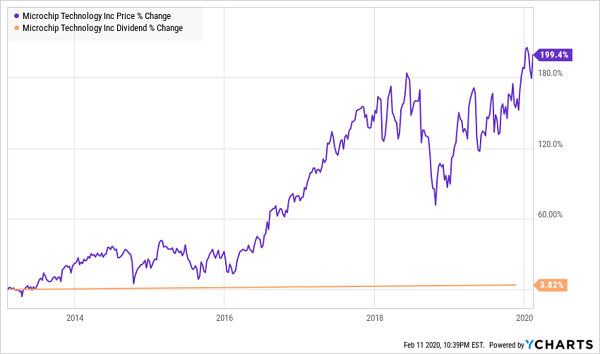 Brown & Brown (BRO) is the sixth largest independent insurance brokerage in the nation, providing everything from property & casualty and general liability to workers’ comp and employee benefits. It has a National Programs division that includes things like specialty programs (flood and earthquake insurance), professional liability products and public entity programs for the likes of cities, school boards and special taxing districts.

Between organic growth and Brown & Brown’s seemingly unquenchable thirst for new blood, the insurer has logged uninterrupted revenue growth for a decade (including a 19% pop last year) and net income that has been pointed in the right direction for most of that time. That has fueled a generous dividend program that has grown by an average of 9.1% annually over the past five years.

BRO Is a Clear Powerhouse Among Its Peers 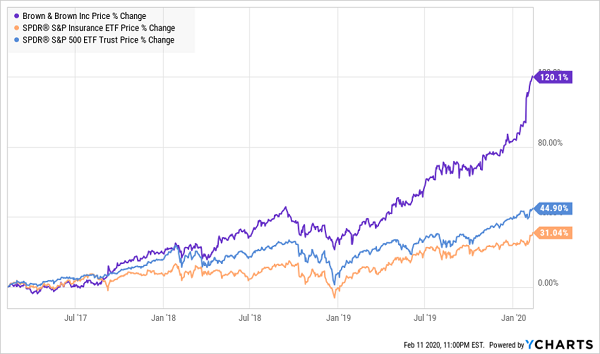 But, like Lockheed, Brown & Brown the stock may have gotten ahead of itself. A 20% return in just six weeks, and a forward P/E in the high 20s, is a bit much for an insurer.

Are you licking your chops thinking about stuffing some of these dividend growers into your portfolio?

Good. I am too. In fact, in the past year, I’ve already added two other “future Aristocrats” to my “Hidden Yields” portfolio. And unlike LMT and BRO, they’re still priced right for investors who are ready to turbo-charge their retirement accounts.

And make no mistake: The time for getting your retirement house into order is now.

Compounding works both ways. Pick the smart stocks early, and their returns and dividends will kick off a virtuous cycle of exploding wealth over time. But suffer yet another year of underperforming the market and collecting mediocre income checks, and you’ll find yourself even further behind on your retirement goals.

Dividend growth is the engine behind my Hidden Yields service. Now, I want to show you seven recession-proof “Hidden Yields” that can deliver double-digit returns, rain or shine.

These picks average 20% or more in total returns during bull markets. But that’s the easy part. What sets this pack apart are the 12% gains they’re capable of churning out in bear markets.

You never see these stocks touted on CNBC, Fox Business or any of the other major outlets. But it’s not because they’re risky. They’re certainly not dangerous.

The risks are piling up as we enter a contentious election year, as the coronavirus stalls out China’s growth engine, and as the Federal Reserve says it will stay put … even though we’ve heard that story before.

The time to take action is now.

Double, maybe even triple, your retirement income overnight with these durable dividend stocks. Click here for all the details, including company names, stock tickers, buy-in prices and my in-depth business analysis—absolutely FREE.