Let me show you 3 headlines I ran across last week:

“Global Dividends Break New Record in 2017, With More to Come for the Year Ahead”
—Institutional Asset Manager

What do they have in common?

They’re all blaring out the fact that American companies have so much cash that they can’t ship it out to investors fast enough! Funny thing is, the herd is completely ignoring this fact. Check this out: 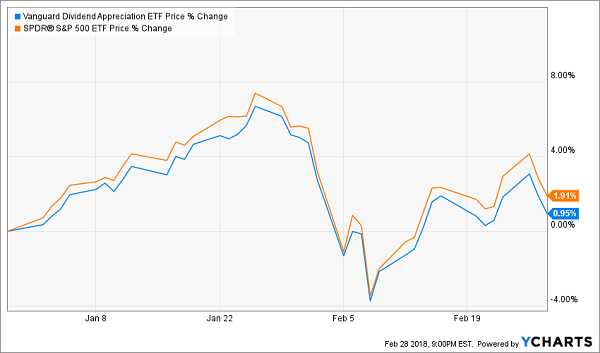 We’re looking at the performance of the Vanguard Dividend Growth ETF (VIG), a good benchmark for stocks that consistently grow their dividend payouts, compared to the benchmark SPDR S&P 500 ETF (SPY) as of March 1.

It may not seem like much of a gap on this chart, but SPY’s gain was double that of VIG since January 1. Why? Because like a bird mesmerized by its own reflection, the masses can’t look away from this:

… Meets the Belle of the Ball 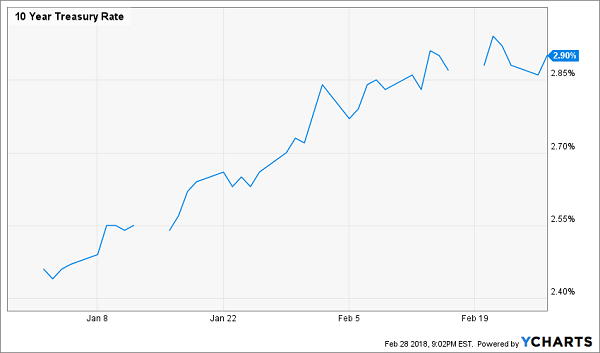 I’m sure I don’t have to tell you that interest rates have soared so far this year, with the yield on the 10-Year Treasury Note sitting just under 3%.

Result? Some folks are pondering moving away from dividend growers and into these so-called “safe” investments.

Funny thing is, the crowd is heading for the exits just as the band is getting warmed up: according to asset-management firm Janus Henderson, dividends surged 7.7% last year, to a record $1.3 trillion, with more gains ahead this year, thanks to strong earnings and tax reform in the US.

The takeaway: it’s only a matter of time before the herd realizes its mistake and piles back into stocks paying 5%+ dividends and/or growing their payouts at double-digit rates.

Let’s beat them to the punch with the 3 names I’ll show you below. All of them are doing two crucial things that, when taken together, set you up for a soaring income stream and quick triple-digit share-price gains:

So let’s move on to our 3 buys, starting with…

IR: A “Boring” Stock With “Locked in” Double-Digit Growth

The 2.1% dividend yield might also make your eyes glaze over, but don’t be fooled: management has more than doubled the payout in just the past five years. 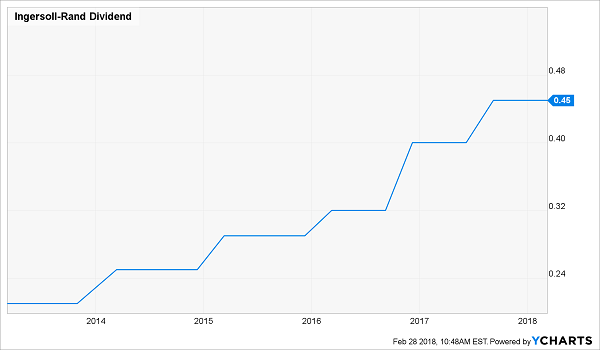 There’s a lot more where that came from, thanks to the company’s surging revenue (up 10% in the fourth quarter) and adjusted earnings per share (EPS; up 21%).

IR’s ace in the hole is its dominant Trane and American Standard heating and air-conditioning brands. All told, the company’s HVAC segment chips in an outsized 76% of sales, and it’s red hot, with revenue up 8% in Q4.

Surging construction across the globe is keeping IR’s furnace factories humming, while more homeowners trade up to more efficient models. You can see that in IR’s new bookings, which spiked 10% in Q4.

No wonder the Street sees a 15% EPS gain this year. That, plus IR’s low payout ratio—just 33% of free cash flow (FCF) and earnings has gone out as dividends in the last 12 months—makes another big dividend hike a lock as soon as August.

RCL: Payout Growth Will Go On

Royal Caribbean Cruise Lines (RCL) is a perfect illustration of the price-lifting power of a soaring dividend payout. Take a look at this chart—the pattern is clear: 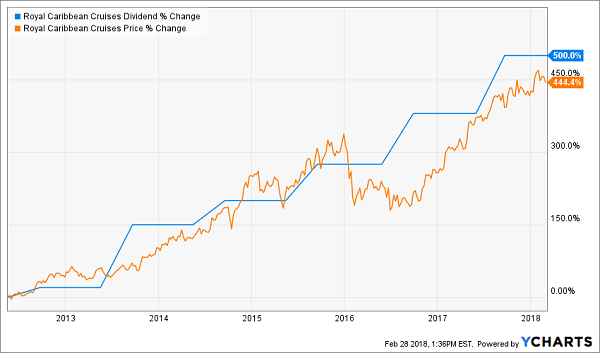 Ever since RCL started cranking up its dividend in earnest in early 2012, the share price has risen almost in lockstep!

That’s no coincidence—I’ve seen this pattern in dozens of dividend stocks. In fact, the correlation is usually a lot closer, so the fact that the share price is “only” up 444% in that time, compared to a 500% jump in the dividend, tells me that we have a lot more upside to come! 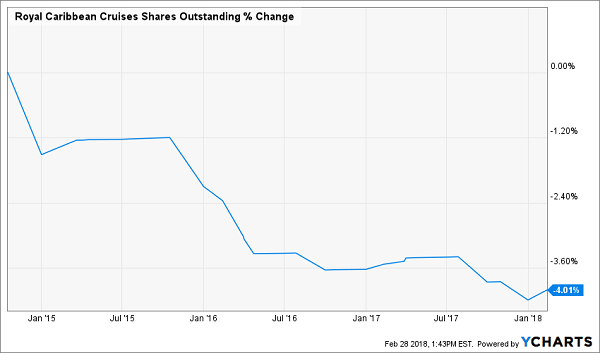 Before I move on from dividends, here’s what a 500% payout jump means to you: the stock yields just 1.9% as I write, but if you’d bought back in February 2012—just six years ago—you’d be yielding an incredible 9.8% on your original buy today!

As with Ingersoll-Rand, the ridiculous mismatch between Royal Caribbean’s growth and current valuation is one reason why it should be on your list.

Now let’s move on to…

The Street’s response? The stock dropped 1.5% on the day.

But that will change as the size of the hike sinks in and investors bite, driving the share price up and bringing the yield back toward the 3% it’s averaged over the last five years (because you calculate yield by dividing the payout into the current share price). 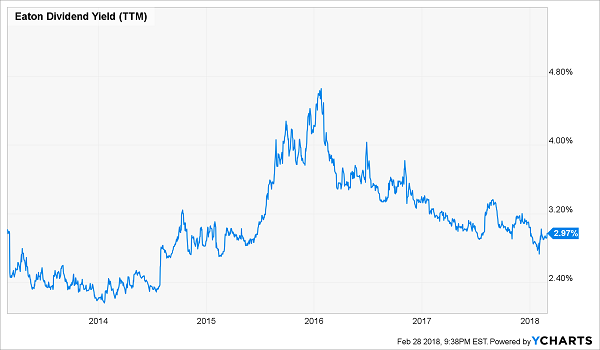 This phenomenon, by the way, is precisely why your favorite dividend-paying stock always seems to yield the same, even after a string of payout hikes like Eaton has brought in (the payout’s up 43% since 2013).

But the Street is sometimes a little slow to catch on, creating a nice—if short—buying opportunity.

Of course, that’s not the only reason to like Eaton: the company also saw strong gains across its segments (electrical products, electrical systems and services, hydraulics, aerospace and vehicles) in Q4, driving a 7% rise in the top line and a 15% rise in adjusted EPS.

Eaton, Ingersoll-Rand and Royal Caribbean are just the start—I’ve uncovered 7 more “hidden yield” stocks just like these poised to DOUBLE your money every six years (or less) while TRIPLING your retirement income.

Here’s a glance at just 3 of the 7 dividend-growth plays I’ll reveal when you click here:

All you have to do is CLICK RIGHT HERE and I’ll give you all the research I have (in plain, easy-to-follow English) on these 7 bargain “dividend accelerators,” including their names, ticker symbols, buy-under prices and more.

But a word of warning: Like IR, ETN and RCL, these 7 stout dividend growers won’t be cheap for long. Don’t look back and kick yourself for not jumping on this opportunity. Get all the details now!