My Plan to Grab Big Gains (and Dividends) From the Selloff

So stocks have had their steepest nosedive in seven years, and with the whipsawing market we’ve seen since, you might—might—be entertaining the knee-jerk urge to sell.

I have one word for you: don’t.

I’ll tell you why in a moment.

First, let’s look at why this panic happened, and where things go from here.

I’ve already fielded calls from worried family members and friends asking about their 401ks. When my mother emailed to ask if the Dow losing 1,100 points in a day was a big problem, I responded with three words:

Of course, for everyday folks counting on stocks and bonds to fund their retirement, seeing a 4.6% drop in a day is horrifying—especially if you remember 2008, when such drops were the beginning of a horrific bear market that ended with a 50% decline in stocks.

And that’s why selling at the beginning of a bear market is a terrible idea. An index investor who shrugged at that decline was rewarded with this:

The Payoff of Ignoring the Bear 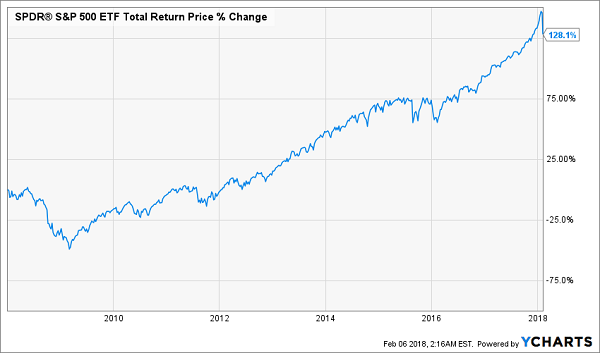 There’s also the dividend issue. At the bottom of the 2009 crash, investors who bought got a 3.9% dividend yield. Their current yield on cost? An unthinkable 6.9%. That’s the power of being greedy when the market is fearful, as Warren Buffett likes to say.

This is also why I’m not surprised that my sources in the finance world are not panicking. I recently chatted with two portfolio managers and one trader at three different investment companies. Although they didn’t say it in so many words, their attitude about the recent fall in stocks could be summarized in three words:

Why the Selloff Happened

Still, the selloff did happen, and we need to understand why it did.

Remembering that short-term price movements are a “random walk”— they can’t be predicted and don’t indicate anything beyond flows of capital in and out of the market—we do occasionally see herd mentality, where selling begets selling, turning a small correction into a crash. 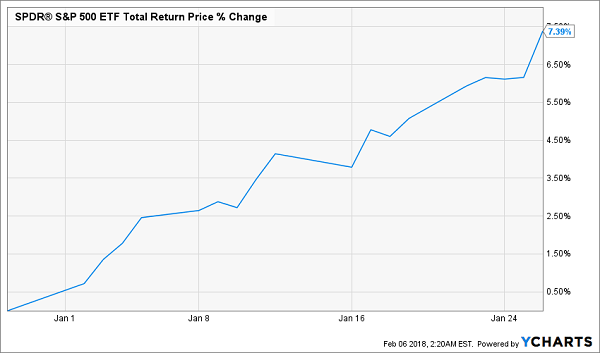 Remember the news stories in the middle of January about how the market’s sudden gains meant the S&P 500 reached analyst’s targets for the entire year in just two weeks? On January 17, CNBC wrote, “Stock market’s rapid rise already surpassed full-year forecasts.” Of course, some investors saw this as an opportunity to take profits and did so.

Some analysts also point out that algorithm-trading programs (computers buying and selling stocks automatically) may have magnified the selloff, while others note that the Federal Reserve’s plan to hike interest rates three times in 2018 could be a factor.

While the computer story makes sense—we’ve seen this before—the Fed also hiked rates three times in 2017, when the market was less certain the central bank would do that, and stocks rose over 25% on the year. So computers may be a culprit, but the Fed argument is a little thin.

A more important factor isn’t computers or big financial institutions. As boring as it sounds, mom-and-pop investors may be the culprit. The friends and family telling me they want to sell are the tip of the iceberg, resulting in cashed-out retirement funds, while the smart money shrugs.

In other words, this is a really bad time to sell.

The (Economic) Boom Rolls On

The truth is, there is so much good news about the economy that it’s almost impossible to go through it all. That’s a big difference from 2008, when a recession was already underway. Now, however, there’s an exhaustive list of impressive stats.

Inflation, meanwhile, remains low—prices on all items, including food and energy, rose 2.1% in 2017. When wages rise faster than inflation, Americans have more money to spend on discretionary items. That’s a big reason why consumer spending grew at its fastest rate since 2009 last year, and almost all economists expect it to grow as quickly in 2018.

This isn’t all that’s going on. I recently wrote about demographic trends that are good for the economy, as well as the “wealth effect” that’s already caused consumers to spend more.

The takeaway? There are too many positive stories in America’s economy for a stock market crash to last.

Then there are corporate earnings, which look strong nearly across the board.

According to FactSet, more S&P 500 companies reported revenues above estimates (80% in total) in the fourth quarter of 2017 than ever before. Meanwhile, three-quarters of S&P 500 firms reported earnings above expectations. And don’t forget the revenue story: sales are up 7.5%.

Again, this is very different from 2008. When that bear market started, worries about bank failures, inflation and low wage growth were hitting the press.

In total, S&P 500 companies have so far reported 13.4% earnings growth, and no sectors in the index are reporting declines. Also, that earnings growth rate is faster than the rate we saw in 2017. I told readers at the start of the year to look out for earnings growth—analysts were expecting about an 8% increase in S&P 500 earnings in 2018, so the 13.4% gains we’re seeing now are getting stocks off to a good start to meet that target.

With strong earnings and sales growth, the selloff has made stocks even cheaper, despite a lack of worrisome indicators in companies’ balance sheets and income statements.

Here’s something else you need to know about the selloff: it’s juiced the dividends on my 4 favorite CEFs to buy now!

Take my latest addition to this esteemed list. It’s a stock fund that now throws off a SAFE 9.6% dividend! So if you drop, say, $100,000 into this cash machine, a full $9,600 would boomerang straight back into your pocket in the first year alone.

And because management has a keen eye for value (the stocks in its portfolio boast a far lower valuation than the S&P 500), it’s held up way better than the index in the market hurricane: 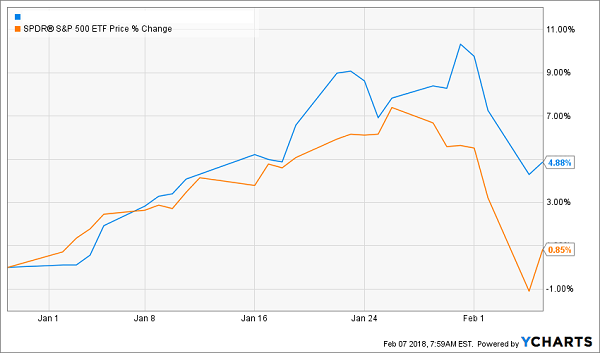 The bottom line? Thanks to its shrewd management team and rock-bottom valuation, this one has easy 20%+ upside in the next 12 months, in addition to that fat dividend yield!

That’s right—we’re looking at a 30% gain ahead by this time next year here.

These are the kinds of returns you can find when you cut emotion from your decision-making and buy when everyone else is freaking out.

I’ll show you the name of this fund right now when you click here. I’ll also reveal 3 more funds that have seen their discounts widen and their yields spike (I’m talking an 8.1% average payout), courtesy of this irrational selloff. They were great buys before … but they’re terrific buys now!

Don’t miss this unique chance to profit. CLICK HERE to get the names, ticker symbols and my complete research on these bargain CEFs now.