My Latest Read on Inflation (and a 5.3% Dividend Ripe for Buying)

Manufacturing is as cyclical a business as there is, and it’s about to take off, driven by two vastly misunderstood factors:

What most people don’t get is that these two trends are inextricably linked. And sitting right where they meet is a closed-end fund (CEF) trading for 88 cents on the dollar and just waiting to pay us a fat 5.3% dividend.

Let’s start by taking these trends one at a time.

Inflation: Likely Not as Hot as Most People Think

Let me start by saying that the breathless media coverage of inflation is focused entirely on how it will crimp stock market returns. But what’s lost is the fact that alarmist inflation predictions may not play out to the degree people expect.

How’s this possible? Let’s dig into the numbers. 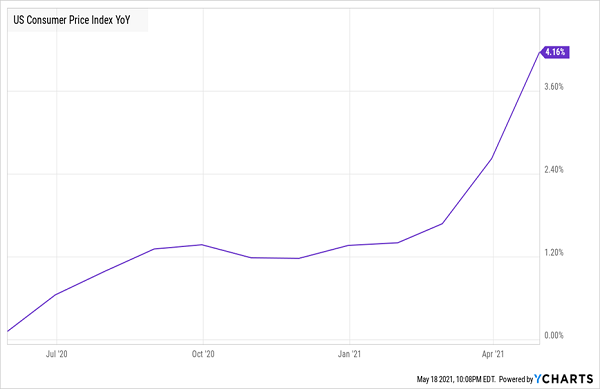 This is the chart everyone’s been talking about: the one showing the big rise in the consumer price index (CPI) in April. At 4.2%, it’s more than double the Federal Reserve’s 2% target. This is also the highest reading we’ve seen since the subprime-mortgage crisis.

But there’s another side to the story: and that is that the latest CPI reading compares to the dark days of last April, when prices fell 0.7% as pandemic shutdowns took hold.

Even so, we do see inflation ticking up to above-average levels these days: 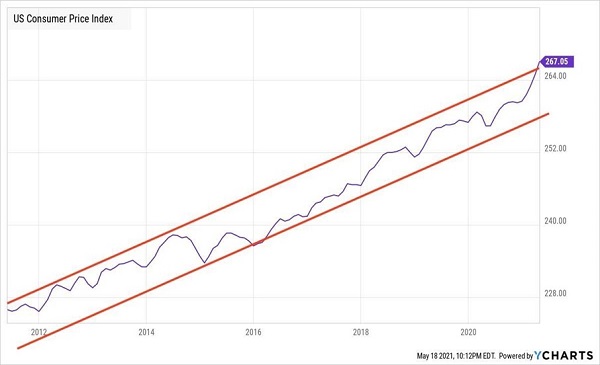 If we look just at the trend of inflation over the last decade, we can see that the rise in April does break through a trend, indicating that inflation is indeed picking up at a faster-than-usual pace.

So what should we do in this netherworld of rising (but maybe not exploding) prices? Stick with me, because this is leading straight to that manufacturing play I mentioned off the top.

We all know that a chunk of the recent inflationary spike comes from the vast number of shortages rippling through the economy right now. Some are due to weird quirks, like the recent gasoline shortage resulting from a hack of the Colonial Pipeline. That’s a sign that Colonial needs to up its IT game, but it’s not important to the broader question of why inflation is rising.

Other shortages are more important, such as the dearth of computer chips, driven in part by the fact that many are made in places where vaccination rates are low.

On the much-publicized lumber shortage, we can point to the fact that lumber mills were closed due to COVID-19. Plastic’s shortage has more to do with the Texas power outage in early 2021.

In other words, a lot of bad luck has resulted in shortages that are boosting prices across the board. And that’s what’s caused that purple line in the chart above to break out.

Grab This 5.3% Payout as Shortages Ease

The good news is that all these shortages are the result of temporary obstacles. With America on track to hit 70% vaccination rates by July 4, a big reduction in virus spread and growing confidence will lift factory output, easing the shortages and helping bring inflation under control.

That’s one part of the reason why we want to target manufacturing now. The other is those low vaccination rates in other parts of the world, which create an incentive to invest in US manufacturing at a time when there’s bipartisan support for infrastructure spending.

Put it all together and you have the perfect environment for a US manufacturing boom.

You can get exposure to this oft-overlooked part of the US economy through ETFs like the Industrial Select Sector SPDR Fund (XLI) or the Vanguard Industrial ETF (VIS), but those have little appeal to us dividend investors due to their pathetic yields of around 1%.

Instead, we’re going to look to a more diversified alternative: the Royce Micro-Cap Trust (RMT), a CEF that pays us that nice 5.3% yield and trades at a whopping 12.3% discount to its net asset value (NAV, or the value of the stocks in its portfolio).

That means we’re basically getting the stocks in its portfolio for 88 cents on the dollar.

The fund has a domestic focus, with 80% of its portfolio in the US and, as the name suggests, it holds shares of small companies. Examples include Circor (CIR), a maker of pumps, meters and switches; and Lindsay Corp. (LNN), whose products are mainly used in water management, communications and infrastructure projects.

RMT’s focus on smaller domestic firms helps insulate us from troubles overseas, as small US companies tend to focus on the American market.

At the same time, the fund offsets some of the risk inherent in smaller firms (and cyclical sectors like manufacturing) by diversifying: RMT has a third of its assets in the raw materials/industrials market but also holds 25% of its portfolio in IT, 16% in healthcare, 12% in financials and 10.5% in consumer-discretionary firms.

That diversified, growth-focused approach has helped RMT outrun the comparable ETFs, as we can see below: 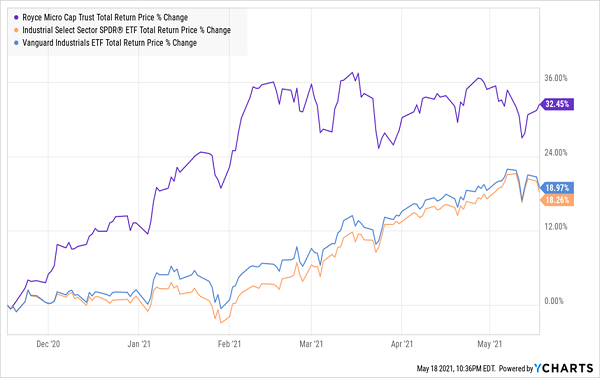 While a 32.5% total return in six months is a lot, RMT is just getting going—especially when you consider that it still trades at a 12% discount. As investors realize the sweet spot this fund is sitting in, expect that discount to disappear, pulling RMT’s higher as it does.

As nice as that 5.3% dividend sounds, it’s actually on the low side for CEFs, which, as a group, yield right around 7% on average as I write this.

And these funds are safe—in fact, the most established of the bunch have never lost money!

CEFs’ durability and high dividends make them the perfect investments for the market we’re facing today, especially after the latest selloff widened their discounts. And I’ve got 5 top picks I urge you to pounce on now. These unsung funds yield 7.1%, on average, and are primed for 20%+ price upside, thanks to their unusual discounts!

Don’t miss out: Go right here and I’ll share all the details on these 5 powerhouse income funds with you right now.