Have you ever read something in the financial media and thought: is this even news?

I know. Every day, right?

I had that feeling on March 21, when I read a Bloomberg story saying that one type of stock—dividend growers—outperforms all others as interest rates rise.

To back it up, Bloomberg and Goldman Sachs (GS) looked at the performance of 50 stocks the bank sees as likely to hike their payouts by an average of 12% this year. (I’ll reveal—and rank—the 4 strongest names from this list in just a moment.)

The verdict? The “Goldman 50” beat the market between the end of June 2016 and March 21 of this year—a period that saw the Fed drop two quarter-point rate hikes on us. 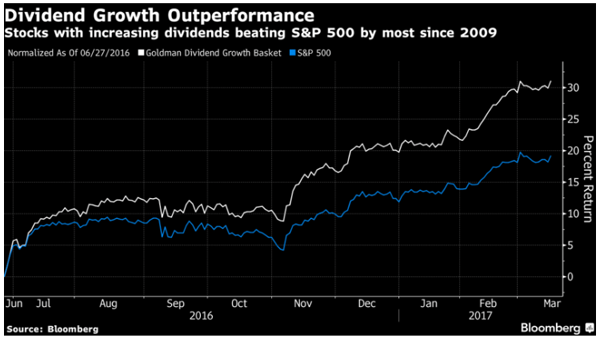 Well, knock me over with a feather.

Fact is, Goldman and Bloomberg didn’t have to cobble together 50 stocks to tell us dividend-growth addicts what we already know: dividend growers are practically guaranteed to outperform—not only when the Fed sends rates up, but in all market weather.

There’s already a pile of research that says so. Like the study from ETF provider Realty Shares I told you about on March 24.

The company, which specializes in dividend funds, produced data starting way back on January 31, 1972 and ending where Goldman/Bloomberg pick up: at the end of June 2016.

The findings? See for yourself:

None of this is to say that what Goldman and Bloomberg have done is a waste of time—far from it.

By targeting stocks expected to hike their payouts double-digits, on average, this year, they’ve handed us a nice jumping-off point to start searching for the next great dividend growers.

Now it’s up to us to take things further—and I’m going to do just that, grinding down the list with five filters I use to find top-quality dividend-growth stocks every day.

After running the Goldman 50 through that obstacle course, I’ve narrowed the list to four. But going from here to a buy decision is still a big leap. So let’s dive deeper and rank these survivors, starting with …

WHR: Cheap … but for Good Reason

Whirlpool (WHR) is certainly cheap, trading at 14.9 times trailing-twelve-month earnings, but that’s because there are plenty of things that could trip up the appliance maker in the next few months.

One is the fact that it gets more than half its revenue from outside the US, so the strong greenback—which would get stronger with rising rates—is a headache. In 2016, Whirlpool posted 2% revenue growth in constant currency, but exchange rates kept sales flat.

I think first-level investors are making too much of the impact a collapse of Sears Holdings (SHLD) could have on Whirlpool. But Sears still has about 20% of the US appliance market, so Whirlpool would take a hit, at least until growing retailers like Home Depot (HD) pick up the slack. Sales would also get squeezed if rate hikes kneecap the housing market. 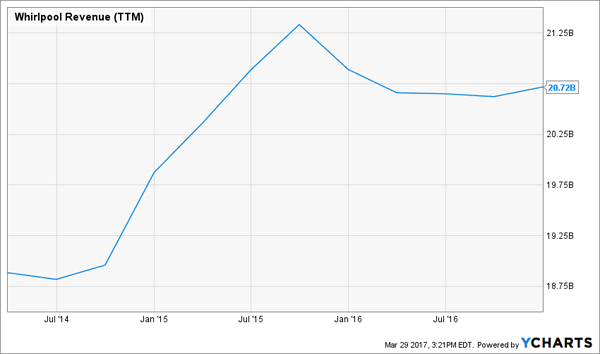 The company’s payout ratio is just 33%, second lowest of our group, so the dividend is safe, but these risks could certainly weigh on payout growth. And with a yield of just 2.3%, we’re not exactly getting a bucket of cash to wait around and see what happens.

A High-Paying Sin Stock With a Big Catch

Altria Group (MO) is proof that as much as folks love to complain about smoking, they’re more than happy to own cigarette stocks.

That’s because it pays off. MO has been on a steady burn in the past five years, more than doubling up the market when you factor in dividends: 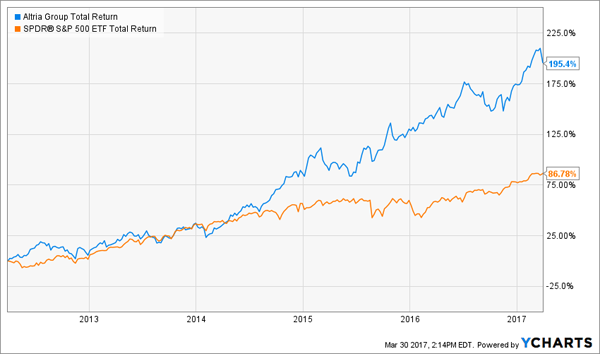 It’s the dividend growth that’s gotten investors hooked: the company has boosted its payout by 49% since 2012. It’s also the kingpin of our “Goldman 5” in the yield department, at 3.3%.

So why isn’t it further up my list? After all, it looks cheap, with a trailing-twelve-month P/E ratio of 10.0. But that’s because its earnings per share (EPS) were juiced by a big one-time gain on the sale of SABMiller to Anheuser-Busch InBev last year (Altria held 27% of SABMiller and now has a 10.5% stake in the merged brewer). On a forward basis, its P/E of 22.4 is well above its five-year average and the market’s ratio of 18.3: 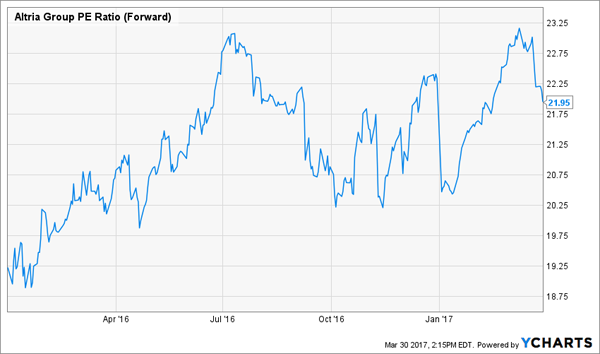 That rich valuation is keeping me from hitting the buy button, because there are better deals available…

Interpublic Group (IPG) yields 2.9%—below Altria—but its payout has been on a much stronger growth tear, having tripled in the past five years.

That’s come as the explosive growth of digital marketing has driven the advertising giant’s revenue higher. And check out how IPG’s surging payout has lit up its share price: 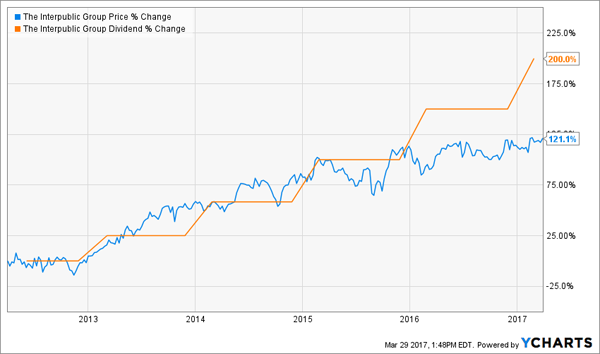 Right away, you’ll see that the stock takes a nice jump up with every payout boost … except the last two. That tells me IPG’s stock is due to catch up, and there are two things that could be the trigger: a ridiculously low valuation and management’s share buybacks.

Right now, IPG trades at 16.8 times trailing-twelve-month earnings, below its five-year average of 17.2 and the S&P 500. That’s way too cheap for a company that’s posted incredible EPS growth since the financial crisis: 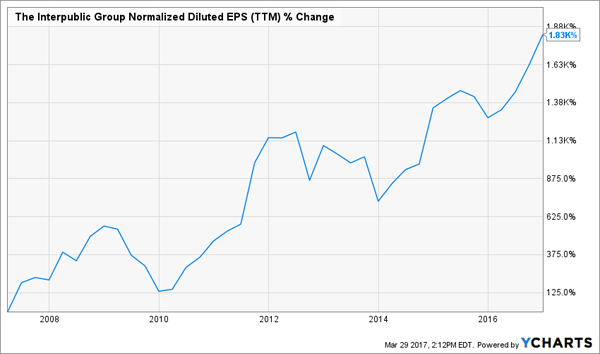 Which brings me to buybacks: in the last six years, IPG has taken 20% of its shares off the market, boosting EPS and helping its share price rise ever higher.

Management isn’t stopping, with the board recently clearing it to buy back another $300 million worth of shares, which is roughly what it spent last year. With the stock looking cheap and more growth ahead, the timing couldn’t be better.

Interpublic would be my favorite, if not for another stock with even faster dividend growth…

Amgen (AMGN)’s payout is on fire, surging 219% in the past five years; the payout ratio is a miniscule 38.9% … and revenue and EPS have been, well, off the charts: 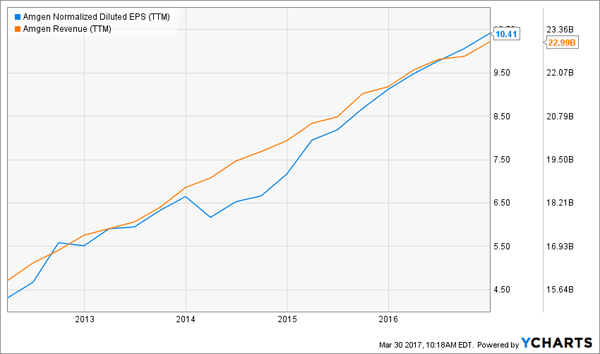 The balance sheet also gets a clean bill of health, with long-term debt of $34.6 billion that’s more than canceled out by Amgen’s $38.1-billion cash hoard.

The company is in the doghouse after test results from its Repatha cholesterol drug disappointed investors, especially in light of its hefty $14,000 yearly price tag.

But Amgen goes a lot further than just one drug. Its pipeline boasts 12 treatments in Phase III trials; its massive cash hoard sets it up for a big acquisition; it spends a high 17% of its revenue on R&D; and its current drugs delivered a decent 5% sales boost in 2016.

The Street has an average 12-month price target of $187 on the stock, despite the Repatha disappointment, which would translate into a 15% gain from today’s level. This is one case where I agree.

Forget a 3% Yield: Grab These 8% Payers Before They Take Off

These four are all strong companies, but why mess around with 3% payouts when you can nearly triple that right off the top—and still pocket dividend growth and double-digit gains too?

I’m talking about a safe 8% payout, starting today. That’s enough to best the market’s average long-term gain (around 7% a year) in cash.

I know that sounds too good to be true, but I assure you it’s the real deal.

Hundreds of Americans are collecting this safe 8.0% income stream—and watching their income and their nest eggs balloon higher—as I write this. They’re doing it through the 6 investments in our new “8.0% No-Withdrawal Retirement Portfolio.”

The best part is that as I write this, these solid dividend payers trade at 10% to 15% discounts to what they’re really worth. But that won’t last. As more folks buy in, they’ll start to move these off-the radar investments higher—and that gap will snap shut fast.

Don’t miss out. Click here and I’ll give you the names, tickers and my full research on these 6 terrific retirement picks right now.